Sunday the 4th of Feb

This Sunday, the 4th, Ed is leading and the lunch venue has changed to the Bear at Maidenhead, 11's is still Squires at Upper Haliford.

Unfortunately David W is unwell (hope you are better soon, D) and unable to lead to Skimmington Castle. Both they and the revived/refurbished Fox Revived were fully booked and couldn't serve us until 1800 so I opted to go to The Plough, Leigh for a 1230 lunch.

For 11s only at Polesden Lacey were Irene, Pam, Graham, Brian and Richard. Ian and Penny, Lilian, Vic, Jeff and Ed followed me down Bagden Hill, passing another entrance to PL and Tanners Hatch where there used to be a sign 'Beware Adders'. The sign disappeared years ago - perhaps the adders couldn't multiply ? After tunnelling under the A24 we used the cycle path then Pixham Lane and briefly the A25 before turning off to Brockham. To meet our deadline the most direct route - Wheelers Lane, Wellhouse Lane, Snowerhill Road and Tapner's Road was required and we were soon sitting comfortably in The Plough. As usual the food was very good (they do sandwiches on Sundays) and whilst waiting Vic fascinated us with tales of his working life experiences. After a quick drink Jeff left to participate in the avian census.

After lunch I chose a slightly roundabout route to Dorking whilst Vic, with the longest journey home, opted for a direct route. Lilian, Ed and I stopped in Dorking for refreshments at Gorgeous Gertie's (wonderful beetroot and chocolate cake), I rode home and hopefully L and E arrived home before it was really dark.

Thanks to  all for company also the Clerk of the Weather for a dry day.

Dave ward has been in touch and is very unwell so will not be leading this Sunday. I suggest we meet at 11's as planned and decide on an alternative ride. Dave has not booked the pub. Anyone with an alternative route to hand please step forward.

Please pass on to anyone relevant.

Here are a few photos from my cycle tour with Spiceroads in Iran. We started in Shiraz and cycled north to Tehran via Isfahan. Unfortunately, due to illness I didn't do much cycling. 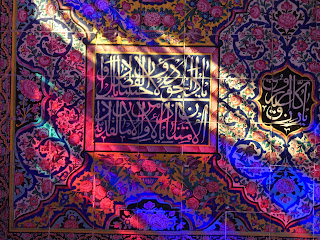 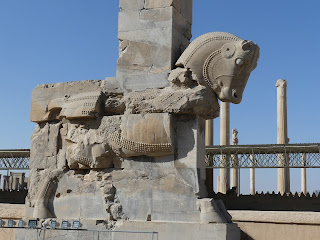 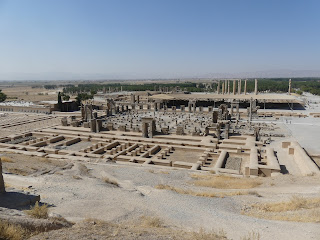 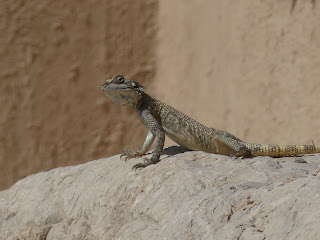 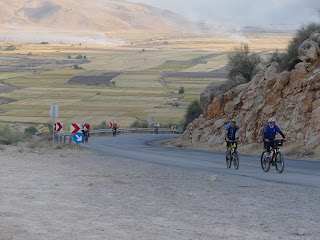 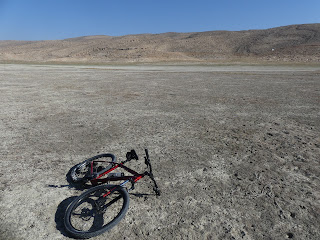 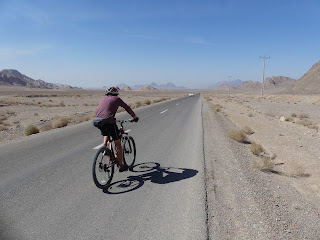 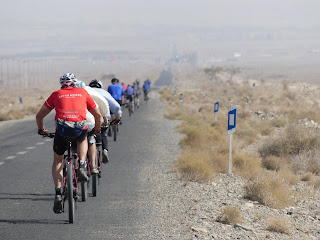 The ride that didn't  happen due to the heavy rain mixed with snow and hail.   Nevertheless - there was a few of us at Squires, Tony, Alan, Dave and Bill.  I really wasn't sure about going but I was encouraged to go to Squires when I knew that Tony, at least one other from our group would be there.   And when has Dave not made it to an elevenses??  Bill and Alan were already there when I arrived, in fact, they were all there before me.  We chatted, drank coffee, ate buns and shortbread - all before Richard joined us!

After a while, we said goodbye and left,  homeward bound.  Thanks all, I'm really pleased I made the effort, Pam :) :) 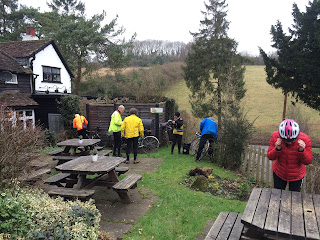 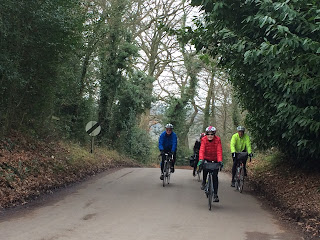 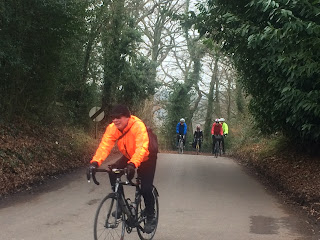 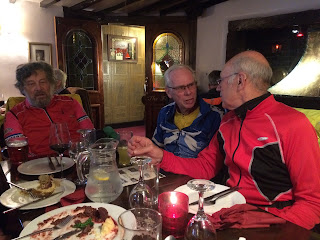 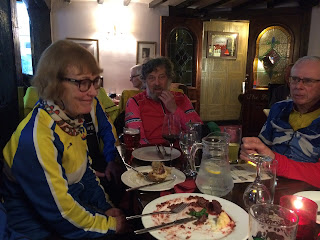 About 15 gathered at Leatherhead Wetherspoons for a convivial elevenses on yet another rather gloomy morning.  Only half set off towards lunch at The Wellhouse on a short but rather hilly route via Headley Court and Walton-on-the-Hill.   With our lunch destination literally in sight I gave the tantalising option of a right turn and a detour to 'enjoy' some more climbs in the delightful lanes of Mugswell, Upper Gatton and Chipstead before lunch, and to their credit, Graham, Mike, Terry and Lillian were game enough to join me in this folly!   We were eventually rewarded by a brilliant descent of White Hill to reunite us with the others at the pub, and Mike Morley then joined us too.   Lunch service was pretty good really, given that the pub gradually became very full, and the menu seemed to offer something for everyone, an increasingly rare thing on a Sunday!   We left the pub (and Graham nursing a puncture) shortly before 2.00 pm, and riders gradually peeled off en route leaving four of us by Tattenham Corner and just me by Horton Park!    A good effort all round for this time of year with over 700 metres of climbing so well done all and thanks for your company!
Posted by David W at 07:34 No comments: 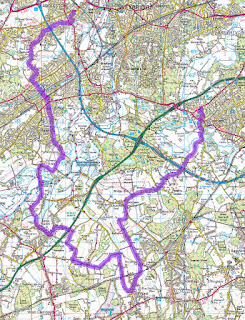 Aided by a brisk and chilly northeaster and on roads thick with cyclists I was an early arrival at Addlestone's Golden Cafe. Soon there were a baker's dozen though five (Bill, Bob, Caroline, Joe and Stephanie) would go no further.
Within 100 yards of our start the Xmas Eve newcomers (Ian and Penny) were fortunate to join making ten. Liberty Lane took us over the M25 and past the Bourne Valley to Woodham Lock. Pyrfords Green and Village came next and I stretched by turning right at The Seven Stars to Send Marsh. Three more rights after The Jovial Sailor brought us to Sussex Farm and that bouncy concrete road to Jury Farm. The final climb up Ripley Lane split the bunch but the leaders reached The William IV by 1230.

We sat cramped round the table prepared for 6 to 8 with the diners outscored the soupers 6 to 4.There was much discussion: Where next? The concensus was home so just three continued to Ockham and Martyr's Green. My final companions departed at Chilbrook Lane and I was left to struggle on occasionally at sub ten speed!

Home just after three and 45 miles door to door. We'd been lucky with temperatures above zero all day and in bright sun so the copious run-off had presented no real problems.

John’s daughter, June Wolf, has been in touch with Terry today to provide these details for John's funeral:

We are warmly invited to join his family for refreshments at The Queens Head, The Street, East Clandon, GU4 7RY.

For any donations in memory of John she suggests:
https://www.alzheimers.org.uk/info/20014/make-a-donation

A 2-course Sunday lunch organized by CTC CHEAM AND MORDEN in a private function room at The Angel Inn, Thames Ditton KT7 0AU.

All are welcome. Pre-booking is essential. 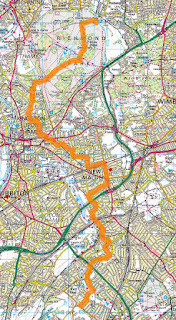 Only the 2nd day but the 4th blog of the year! I mostly mention "regulars" though in truth we were in the minority both on the ride and at Ed's. Irene, Pam and Tony were at Roehampton Gate. Ed, Lillian, Terry and myself rode on from there to lunch.

As usual Ed and I split the leadership; both legs involved significant detours. The ride from Ewell went via Tolworth thanks to a burst water main near St Johns Church Old Malden (still dribbling later in the day, with ice warnings following  DV's accident?). A closed level crossing in Elm Road forced me into the imprompu tour of New Malden town centre.

In general fewer folk seem to be out and about these days; our numbers too were down so plenty of  seating as we turned up in our dribs and drabs. We set off around 1215. Under skies dull, overcast and hinting of rain, it was a variant of my standard tour of suburbia. Just a dozen (including a late arriving Ian) enjoyed the elaborate feast laid on by Ed, Maureen and Lillian. Plenty left as I departed under brightening skies around three.

Ten got to Squires Stoke D'Abernon including two newcomers keen to join us; sadly there was no ride. The roll of honour reads: Alan, Bob, Ed, Graham, Irene, Pam, Simon, Vic plus tandemists Ian Houghton and Penny Church


Posted by RaasayWarden at 07:51 No comments: 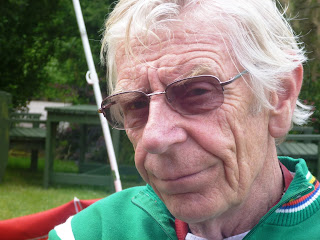 This is a photo taken on 9 June 2010 of John having lunch on an MWW ride at the Little Park Hatch at Cranleigh. Some may remember Toni d'Italia sitting on a freshly painted bench and having to strip as much as possible of the wet green paint from his clothes before he could comfortably take to the saddle after lunch. We remember John with great affection.
Jeff
Posted by Jeff at 23:07 No comments:

John was suffering from Alzheimer's disease in recent years and had recently been moved from a home in Bookham, his home town, to a home in Westcott which was better suited to his needs.

John's wife Marguerite spoke to Terry yesterday to inform him and she will let him know when and where the funeral will take place.

Graham and Terry remember John as a regular with Cheam and Morden from about 2004 to 2010. Perhaps he rode with the Wayfarers too. 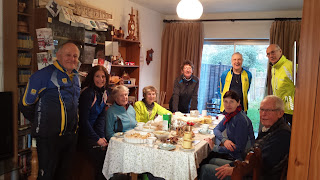