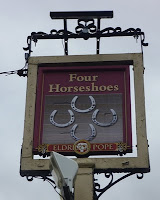 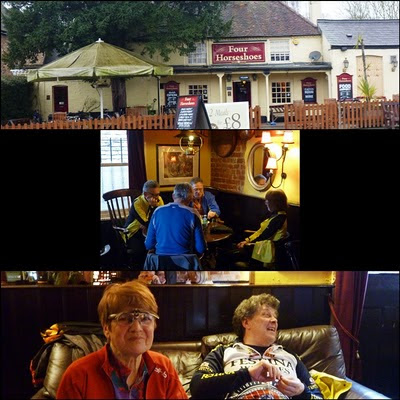 Thirteen made it without assistance to Sainsburys Cobham for elevenses; some arriving at opening time, others (who had not checked times) up to a hour later. It was still bright though not for much longer as eight rode along Convent Lane and then up the Seven Hills Road pavement. Whilst turning right by Weybridge Station Ann was shunted from behind by a car causing her to fall. Neither rider nor bike suffered greatly so we continued to Addlestone where a new helmet was acquired. The route went past The Otter and up to Foxhills where the first drops landed. As we made the turn into Gracious Pond Road, up went the pace to the short dash to the Four Horseshoes at Burrowhill reached before one despite the mishap.

It was a day for hot meals all around while outside the rain increased. The way back was up Staple Hill and down to the hospital. There after a quick poll, another Sunday passed without a teastop. We now headed back into Addlestone (where the leader left us), Weybridge, Walton and Hersham where we split. Naturally the rain stopped minutes after reaching home. Around 40 miles door to door.
Posted by Anonymous at 19:28 1 comment: 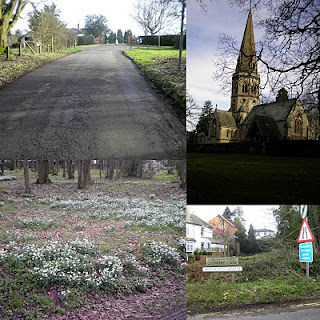 As an exercise in sadistic love I checked out the steepest part of the Hilly 50 course on Thursday afternoon feeling frustrated not to go out with the MWW the day before due to rain (fine weather man me!). The first ascent was Ranmore as can be seen in the collage. The snow drops are out by the church of the north downs way. On towards Coldharbour and then down Longmore Lane surprisingly dry but wet in places with the usual slippy bits around the hairpin at the bottom so watch out! 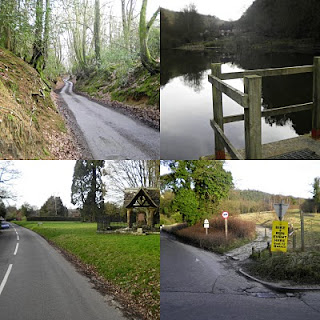 Onwards towards Friday Street up Sheephouse Lane and then down past the lake, again watch out slippy in places. The afternoon was marching on so I cut out the long loop around Holmbury and Pitch Hill and made strait for White Down via Abinger Common over the top down Ranmore again and then the final ascent of Box Hill. Beware of the pothole at the bottom don't cut the corner and look out for the big event of the day the Iron Men will be there already posted with yellow signs. They will also finish at the top of Box Hill and there will be hundreds. I suspect NT car parking will be at a premium. Both organisers are aware of each others event. So get your pre-entry in for a bargain basement price of £2 or £3 on line. This is the tough one and very satisfying when you reach the end.
Start at Rykas Cafe 10am Saturday 5 March signing on from 9.30am 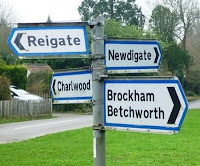 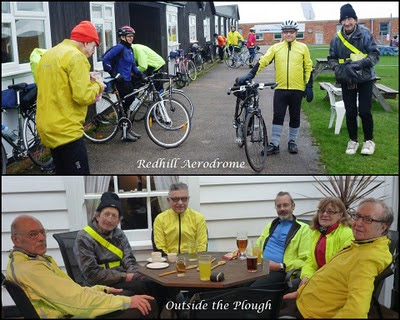 This was a 'lights on all day' (dull and misty) sort of day and a woolly hatted for the second half of the ride. Ed took the trade route to Fannie's then the obvious line past Merstham and landfill to a crowded Redhill Airport.

Seeking extra miles Ed selected NCN 21 much to the disgust of the mudguardless. Thankfully this experiment was abandoned in Horley town centre where we reversed direction for Leigh via The Fox Revived. The only incident of the day occurred was when my rear wheel pulled over on the last hillock. It created minor havoc as we were being stalked by Gatwick rush hour traffic. The bar though not the restaurant of The Plough was packed so lunch was alfresco at least until the smokers came in search of pleasure allowing us to swap places.

Surprisingly the way home was by Brockham and a greasy Coach Road. A brief debate outside Denbies provided a unaminous no vote so on we rode; after Leatherhead I was accompanied by light drizzle. Home by three is not something I normally report; under 50 miles.
Posted by Anonymous at 19:18 No comments:

On a dull miserable day a drizzle soon set in which grew heavier by the hour. The direct route between Kingston and Chertsey Bridge was familiar but not a tour of suburbia near to Penton Hook. By Runnymede the leader punctured but we carried on with his consent to the Queen's farm shop in Old Windsor - a new venue for us (think Denbies / Savill). Here 7 became 11 briefly.

Eton by Windsor Bridge was the chosen way before Burnham and proper countryside. From the top of the Dorney Wood climb, the intended stop, the Blackwood Arms, was just a couple of hundred yards on the right. They had no food ('restaurant opens on Tuesday' - repeating a remark made on the recce two weeks earlier). So we removed to the nearby Jolly Woodman.

After passing to the west then south of Burnham Beeches we were treated to suburbs like Farnham Royal, Stoke Poges, Wexham and Langley which pretend they're nothing to do with Slough. Apart from the proprietor's friends, our five were his only custom in Stanwell Moor. From here we made our by now soggy and chilled ways home. Around 60 miles.
Posted by Anonymous at 08:00 No comments:

Colin Quemby advises that late entries to the photo competition can still be accepted up to Thursday 17 Feb providing they reach him or Pete Barnard beforehand. Judging will take place in the evening.
Posted by mike morley at 23:01 No comments: 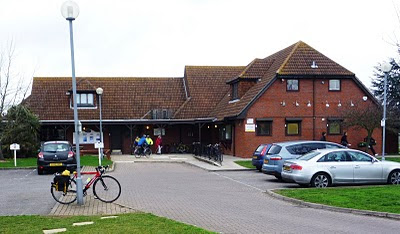 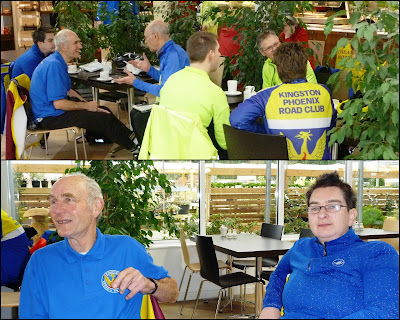 Apéritifs in the Derby Room 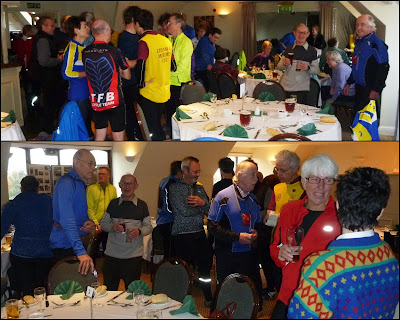 The Cheam & Morden at Table 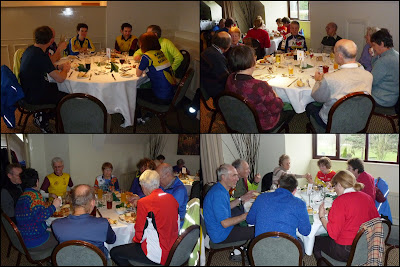 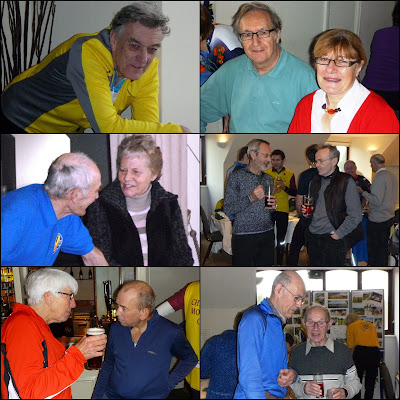 We usually ride past Ashtead Park Garden Centre, but today it was our target for a very leisurely elevenses, with not too much carbo-loading to be seen. Then it was time for a gentle, wind-assisted twiddle, guided by Jake, through some quiet paths and cycleways to Horton Golf Club for the Annual Lunch.

Some were already gathered in the Derby Room, which soon filled up with C&Mers, new and old. After a relaxed drink or two, tables were occupied, with chemistry deciding who sat where. Lunch was most efficiently served by the helpful staff. The quality of food was excellent and quantity plentiful. After coffee there was still time for conversation as members gradually prepared to leave for the journey home, whether by two or four-wheeled transport.

Our grateful thanks to Steve for his faultless organisation on our behalf. Our thanks, too, to Horton GC for serving us so well. Thanks, finally, to all those who keep the C&M tradition alive and work behind the scenes to plan and lead our rides. Without them there would be no Cheam & Morden!