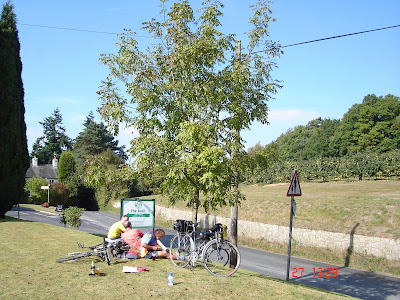 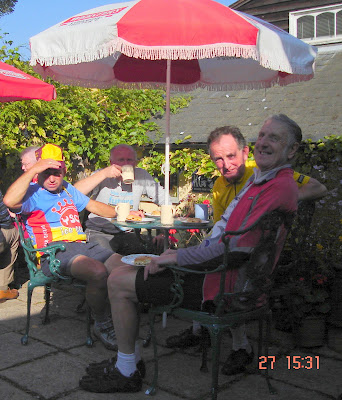 I might of guessed it,Jeff determined to win the club dinner,appeared at all the right places but it was my fault that we were not able to join him on his lonely quest.............
I punctured just after Sainsburys in Warlingham,so in bright sunshine I began to plan my course of action.
It was fast approaching 10.30am so Chartwell was a hill to far,besides Ed looked knackered,Jake less so..........in fact she looked vaguely disappointed having never visited Churchill's home.
A quick call to Ian and we were in the Tudor Rose by 11am.
Now where to go? Richard in the Plaxtol camp,the rest bar Jake,stop at 1'o clock,nearest pub etc.
So just after one we rolled up to The Snail,Stone Street.
Lovely sitting on the grassy bank in quite warm sun............Richard's birthday,so plenty to celebrate.
Ian's thoughts soon turned to tea and Richard's suggestion of the Battle of Britain museum at Shoreham proved a fine choice.

The Phantom Riders of the C&M 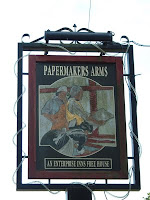 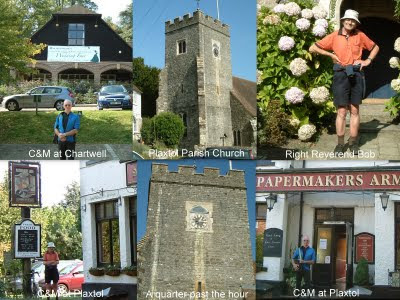 A late start on a frost-free, sunny Sunday morning - ideal for an autumnal foray into Kent. No body-warmers will be needed on those Wealden hills. So by-passing North Cheam, it was onto the small chainwheel en route for Chartwell, Churchill's country seat. The temperature gradually rose from Kingswood and Banstead Woods to Bletchingley, Tilburstow to Crowhurst, Marlpit and Four Elms. Gone 11am already - I'll have to get a move on or I'll be too late. A final snail-like sprint up Mapleton Rd and I'm there, at a quarter past the hour. But where are the C&M? Blast! I must have missed them. A quick call to the leader's mobile: voicemail. I'll catch them up at Plaxtol.

This means a few more hills: Puddledock, Toy's Hill, Ide Hill. Then Goathurst Common, Gracious Lane to Stone Street, Ivy Hatch then Plaxtol. I see the vicar at the entrance to the church - I'll ask him where the pub is. "Excuse me, Reverend...." But blow me, it's not the vicar but our revered and former Rides Secretary, Bob (though in confusion I call him John). Fortunately, he gives me a sabbatical pardon. Five minutes past the hour, but where's the C&M? No sign. We savour our sandwiches, chew the cud, then freewheel down to the Papermakers Arms, a C&M free zone.

We take a glass in the garden, admire the view, bask in the autumn sun and ruminate on the mystery of those lost within the Kentish Triangle. But time is passing and we must not be overtaken by an early sundown. So we remount for the return, concerned about whatever fate has overtaken the phantoms of the C&M. As we pass the church, we sense a sudden chill and raise a silent prayer. God rest their souls. 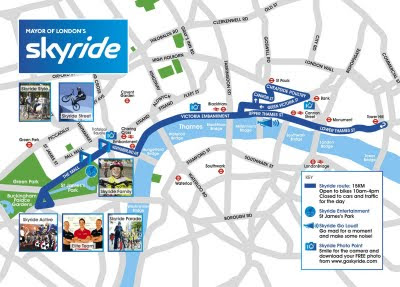 On a cool and bright Sunday morning, lightning struck for the second time in one week. The Wayfarers on Wednesday and the C&M on Sunday, both set off for the Great Wen. From their North Cheam launch pad, the Sunday Skyriders opting to follow this North West Passage were: Ann, Andrew, Andy, Eddy, Jeff, Mike and expedition leader Steve. 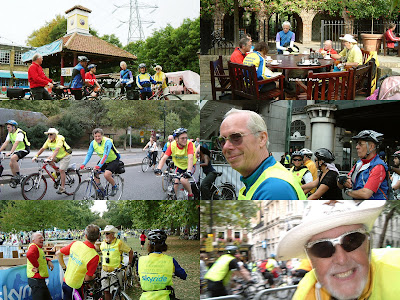 Objective one was Holland Park. The route taken was not the usual, thundering highway but unfamiliar byways following a leafy, wooded Wandle, as though deep in the countryside. We seemed to be threading our way between the cemeteries of S.W. London: Sutton, Morden, Lambeth, Wimbledon, Wandsworth. Our only brief stop was at Merton Abbey Mills, before the Wandle dumped us in the Thames by Wandsworth Bridge. A network of side streets brought us past the monumental family vaults in Brompton cemetery to Holland Park and a restlessly pacing Graham, awaiting our arrival.
Tea taken, it was off again with Skyride signs to guide us through Kensington, the Park to HPC, where the volume of cyclists had swelled to wondrous proportions, the combustion engines now held at bay. It seemed as though some cosmic force had sucked in every cyclist within its gravitational pull. I have never seen so many cyclists of every possible shape and size (fortunately all flowing in the same direction), and not one sign of friction. There may have been some road rage, but all I saw was smiles. 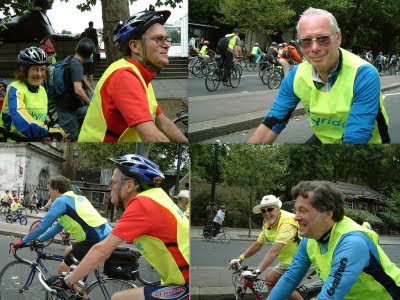 Along the Mall in St James's Park we stopped to elbow our way to the displays and came away with gifts of puncture kits and maps. Rejoining the flow, the only problem was how to keep in touch and recognise each other, until we were carried irresistibly to Tower Hill, where we took our lunch. This was not Chez Gérard but next door at Wetherspoons, or in the Green. After that, with Mike somewhat distracted by the mini-skirted pom-pom girls, we retraced our route (still going with the flow), stopping only to pick up a goody bag. At Buckingham Palace we peeled off and headed south for a tea-time stop on Clapham Common, before plotting our own ways home through the suburbs of London.
A very different ride today, no altitude or calorific stats, but registering very high on the scale of cycling pleasure shared. 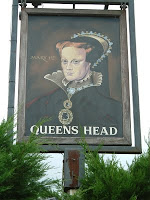 Warm inside - a chill wind outside. Autumn's nearly here. 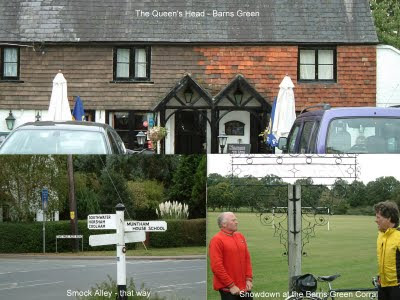 Thanks to Mr and Mrs K-B and Ed for running Saturday's Hilly 50 - the section is £125 better off. There were just under 50 starters with the first three back in 1:51. Ray was a hour behind ahead of Mike M, our only toiler.

There was a strong hint of autumn (overcast, chill northerly) as I reached Beare Green and the early arrivals were in full English mode. On the restart eleven had been whittled down to five with "Smock Alley's an awfully long way" in the air. We set off through Capel and towards Rusper. Taking the lead in Friday Street we plunged down into Horsham and up the other side. Just after the Christ's Hospital entrance we halted; mysteriously five had become three. A retreat to the Boar's Head revealed nothing so back again via Bax Castle to Barns Green and we waited outside the Queens Head. A lucky tip-off sent back us the way we'd came; lo and behold 100 yards later along came the missing Andy and Keith. Andy has spotted booty in the road then they'd turned right at the school before realising probably we hadn't! By now it was one so time to stop.

The wind was increasing by the minute as we headed through Itchingfield to the A264. Broadbridge Heath provides relief and then it was Warnham, the landfill and Capel where the church was open. Naturally we stopped; it turned out to be a gathering of the cycling clans: a Surrey League event; visitors from C&M, West Surrey, and Horsham and Crawley. I was home just after six and 70 miles.
Posted by Anonymous at 09:23 No comments: 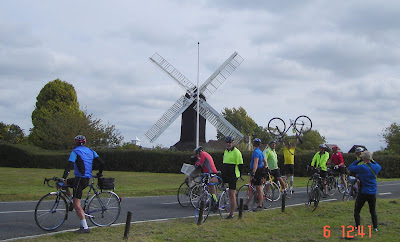 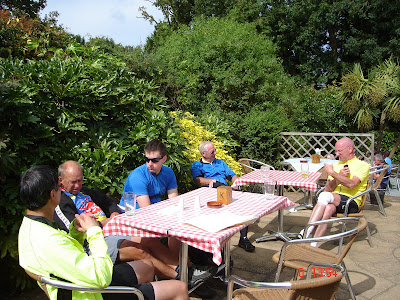 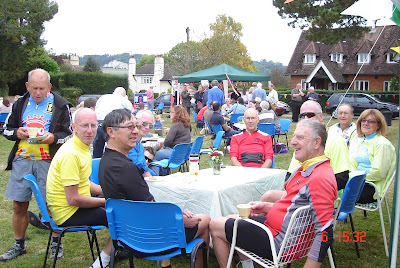 I arrive at Hookwood Tesco to find Jeff awaiting the loan of my (very) cheap lock.Once inside,it was the long trek to the cafe via the cycle stuff,computers and satin emulsion paint.
Ed arrived via Chalk Lane,Epsom and our number totalled 13.
Stephanie headed back,we continued to Wasp Green (The Castle).Apparently,Judi Dench lives nearby in a house surrounded by five acres.
I was previously aware of teas on the green at Buckland today and it didn't take too much persuasion as our leader had not a good word for our Fanny......."She don't like me.....she accused me of not paying"
I led via Lonesome Lane,and the track that skirts Reigate Heath Golf Course.It was here my memory failed me and we soon retraced to go the left of Ivy Cottage.
We regrouped at Dungates Farm where Lawrence had a screw leave his rack & Paul's front mudguard proved unbreakable but pretty mishaped.
The tea stop was a very local affair with around 100 people enjoying the event,monies going toward the Christmas lights in the village.

For completists, the route was:

Friday Night Ride To The Coast(October 2009)

It's to Sarffend. For details see

http://www.cyclechat.co.uk/forums/showthread.php?t=43001
Posted by Anonymous at 16:38 No comments: