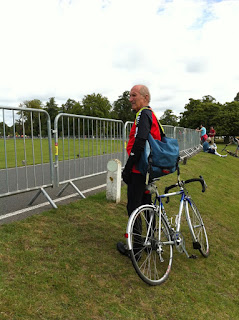 Some more very sad news I'm afraid.   Donald Clarke has been (uncharacteristically) unwell since earlier this year, although he has, very bravely, put in some appearances at recent elevenses meets.    Probably we weren't aware of quite how unwell and quite how unlike the Donald we knew he had become.  Sadly, Lena Clarke tells me he passed away at the weekend.

I changed the 11's and lunch stop as there was no interest in going to Jenners at Maidenhead. So 11's was at an old favorite, Squires at Upper Haliford. Even so only 5 electing to ride to Leatherhed.

Today's congregation was Bob, Alan, Simon, Ray W, Ed, Terry and myself with Alan heading home and Bob finding his own way to lunch.

Over Walton bridge and back roads to Hersham and the alley to the climb at the back of Sandown racecourse, down to West End and onto the Portsmouth road to Fairmile and left through the Fairmile estate and down Blundel lane, the Tilt and cross country to Downside and across Bookham common (passing Bob  sitting on a bench eating his sandwich) and a nice decent into Leatherhead. 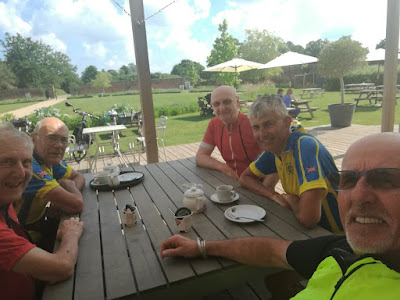 It was a long leisurely lunch sitting out side the pub and with the heat it took some urging to get going. We elected to have teat at Painshill park and on entering found the placed closed due to an infestation of travelers. So back to the Walled garden. Again there was a reluctance leave as it was now very warm, wearily we set off for home with Terry heading towards Effingham and the rest of us for Esher where Ed turned for home and Ray, Simon and myself for Hampton court.

A very pleasant day on the bike if somewhat warm. Thank you one and all.

Due to lack interest for 11's at Jenners, 11's will now be at Squires Upper Haliford and lunch at Wetherspoons Leatherhead. 3's will be decided on the day.

Compared to some, this year's weather has been kind to me. Today was pukka red-nose, red-knees sort of day and perfect for my widdershins tour of Puttenham. Irene and I each suffered a minor problem and delay. So when we arrived at Pinnocks the regulars (Alan, Bob, Ed, Lilian, Terry, Tony, Vic) were supping their favourite brews. Also  present were three irregulars (Keith, Jennifer and Jude from the Beginners section). 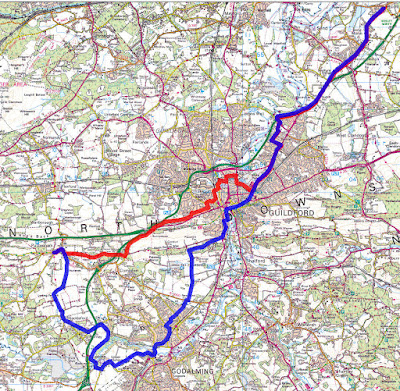 As usual Alan and Bob headed home. These are familiar roads so I won't bore you with the details (see map). Some of the highlights:

And for once no grumbles back at Pinnocks so I like to think they enjoyed it! Plenty of other folk enjoying the sun: a morning sportif near Ockham, an afternoon run in Ripley.
Posted by RaasayWarden at 07:09 1 comment:

2 new ladies joined us at Ripley for the ride to the Good Intent at Puttenham. Welcome Jude and Jennifer. 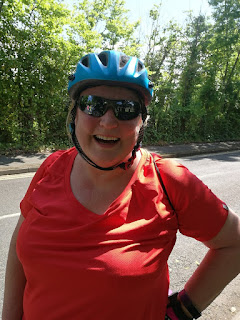 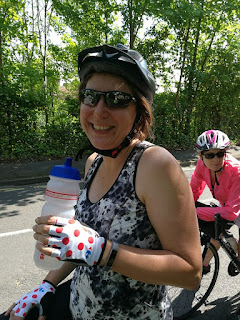 Thank you for helping London's Air Ambulance save more lives by donating £60.74.

Without donations like yours we would not able to run our life-saving charity. We are immensely grateful for your support.

With your donation, we will be able to save more lives by:


The weather started off a bit dismal but sunshine eventually reared it's head which made for a very pleasant days cycling. I started off on the wrong foot by planning the event for the 13th as it is my daughters birthday, 3 boys then she was born on Friday the 13th, you can't say it's unlucky for me!

I was the first to arrive at Sainsbury's Cobham but then the masses soon appeared (perhaps masses is an over statement). It was nice to see Irene make the trek from Kings Lynn, her new home. Also nice to see Jeff make it to 11's.

As South Bucks were bringing some of their coffee pot group (more mature and less inclined to ride to fast and to far) I had planned 2 rides and Graham had agreed to lead the shorter ride. All the usual crowd from C&M turned up and Simon, his wife Lis, Cliff and Maureen and Bill had generously agreed to man the fort (kitchen) at Ripley village hall and get lunch prepared. Various members had also agreed to bake cakes for the event, they included Lis, (Simons wife), Ed, Pam, Carolyn, Maureen (those who didn't turn-up missed a real treat). 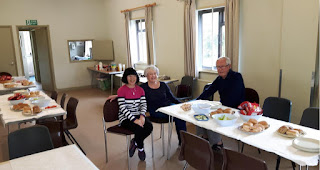 Leaving Cobham it was suprising to see a good few C&M opt for the shorter ride. I had planned a few loops so as not to go to far South and so had Graham on the shorter ride with the consequence that our paths crossed twice before getting to Ripley. Our last loop took us to Send Marsh and the 3 life size steel Giraffes which is right next door to the Chancellors house (he wouldn't agree to fund the lunch! Cut backs).

As we were the longer ride we reached Ripley village hall after the other group but some food was on the table, phew. It was lovely to see the interaction between South Bucks and C&M and it was a very social lunch. 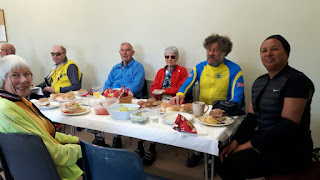 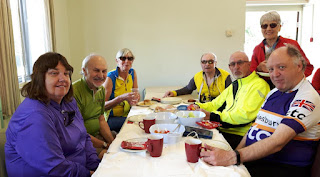 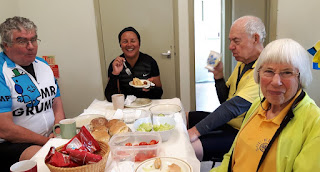 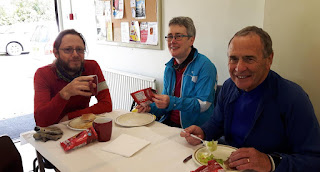 Tea had been planned for Painshill park where most of South Bucks had parked (yes they came by car) and the 2 groups met in the car park, apart from those who had headed home. Most agreed to call it a day and head home without tea(it was only 5 miles since lunch!). I believe that Pam and Ed did take the opportunity to take some refreshment before heading home.

Well I couldn't have wished for a better day, 8 from South Bucks CTC and a good turnout from C&M, sunshine, great company and a ride in the Surrey countryside.

I can't finish without thanking those who worked hard to getting lunch for around 30 people and also those who made the effort to bake cakes. Great effort by all concerned.

South Bucks CTC hold a cycling weekend in the Chilterns in October known as the Golden Beaches weekend (Beech trees that is). This is a great weekend and I have done the event for about 6 years. This year the event may not take place due to lack of people available to man the event. If anyone has a spare weekend in October and are willing to help out please let me know.

Thank you one and all. 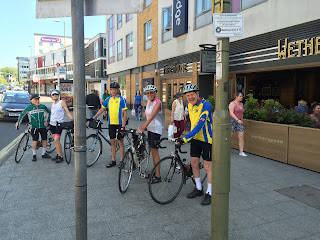 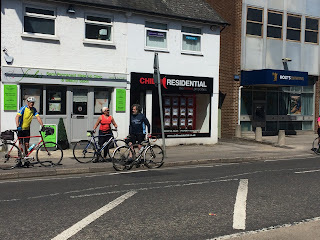 A cloudless day saw a good number of us assemble at the Bourne Valley Garden Centre, including long absent Rachel.   A dozen of us set off for Farnborough and two dropped off en route still leaving a good quorum.  Our route took us via Foxhills and Gracious Pond to Chobham, which we skirted to be able to sample the delights of Pennypot Ford.  Well, I sampled it anyway - it was too deep for the tastes of everyone else!  Then it was plain sailing via Bisley Church and Ranges, Gapemouth Road and Deepcut Bridge to The Hatches.   From there it was but a short haul to Farnborough although we took the cycle path through Queen Elizabeth Park to enter the town the  back way and avoid the rather daunting main roads leading to the centre.  The Tilly Shilling wasn't too busy and had a distinctly continental flavour with with the front patio doors all wide open to the terrace.  Our traditional large table adorned with a carved map of the British Isles miraculously became free as we arrived!   After lunch we took residential back roads to North Camp and Mytchett, then climbed Tunnel Hill.  It was here that one of those unavoidable misunderstandings happened!   I had paused at the top but some riders, in their enthusiasm, sped past, thinking I was ahead, and overshot the turn for Pirbright, which is, admittedly, completely unsigned and very easy to miss.   My core group continued on the planned route through Cemetery Pales, Knaphill and Chobham to Gracious Pond and Holloway Hill.   We reached tea at 3.30.  Luckily, it was the first day of the season at Great Cockcrow,  and tea and cakes were at least as good as last year!  For once though it was too hot to linger too long on the terrace watching the comings and goings of the miniature steam trains, and we set off for home at about 4.00 pm.  As we left we met Pam, who had been one of the 'breakaway', who told us all was well.   My thanks to Graham for back-marking, and to Vic and Pam for other help, but special thanks go to the weather for making it a brilliant day!
Posted by David W at 07:37 No comments:

My CTC holiday to Kerala and Tamil Nadu Southern India

My Dad and I went here at the end of February and early March this year. It's a beautiful part of the country, but very hot as it's down in the southern most part. The food was excellent, the people very friendly and lots of quiet country roads and monkeys to watch. We visited several temples along the way and also saw traditional fishing boats being built. We flew to Trivandrum and back via Kochi.
Here's the YouTube link. https://www.youtube.com/watch?v=uQRO-lfonB8&t=1s
Posted by Paul at 16:55 No comments:

Sunday the 13th of May is the annual joint ride with South Bucks CTC.

There will be 2 rides both starting from 11's at Sainsbury's Cobham. A normal ride of around 18/20 miles and a shorter ride of around 10 miles at a reduced pace to suit the more mature rider.

Both rides will meet for lunch at Ripley village hall. A light lunch will be provided. Both groups will then make their way back to Painshill park for tea.

Lets have a good turnout so please do try and make the ride.