On a mostly dry day, a dozen of us turned out for breakfast at a new venue, the Ladybird Cafe in Guildford Street, Chertsey, and it seemed to meet general approval.

Since lunch was less than 12 miles away by the direct route, we took a long traffic-free detour thru the Wentworth Estate, Blacknest and Windsor Park, exiting the latter via the Guard's Polo ground, Wick Road, and Blay's Green. Our lunch stop was the Rose & Olive Branch at Callow Hill, where a table for 10 was already laid out for us. Initially only 8 of the places were occupied, but we were later joined by Daniel. His story was that, on finding it raining when he originally woke up, he had decided not to join our ride. Having gone back to sleep, he woke up some hours later to find non-stop sunshine and decided to join us after all.

We returned via Egham and Chertsey, but at the latter decided to skip tea and make for home. I punctured at Lower Sunbury (piece of coloured glass) and took the train home from Sunbury station. My record is now as follows:

Incidentally:
Q: why can't my bicycle stand by itself ?
A: because it is two-tyred!

Horsell
Posted by Jeff at 10:44 No comments:

Leaving Andy, Bob, Steve and Ann and a KPRC contingent in the warmth, eight rode out from Squires West Horsley and down into Ripley. From here we "main roaded" (Newark Lane, Pyrford Common Road, Monument Road) into Woking. Then it is left at the giant roundabout down Woodham Road to Cheapside Horsell for lunch at “The Plough” where Daniel arrived belatedly to enjoy a belated roast dinner and pudding. The restart was in brilliant sunshine and we joined the Basingstoke Canal in the middle of Woking. At West Byfleet, we split into two groups, one heading for Ockham Bites, the other for Addlestone where Ed and myself has a warming drink in the Golden Café.

The weather had been better than expected but very cold. Thanks to one and all for an enjoyable day.
Posted by Anonymous at 08:07 No comments: 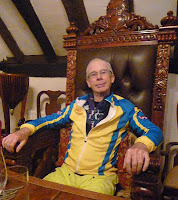 Apologies for the self-promotion, but I couldn't resist it.

Double figures met at Henfold Lakes for the first bacon sandwich of 2013 - there goes one New Year resolution. What happened to Pam and Irene? One of our number, Matt, had other fish to fry, so then there were 9 for the ride to Rusper. This was just 3 miles as the crow flies. Expectations of an early lunch were dashed, however, as the crow had other ideas.  Our feathered friend led us a merry dance via Newdigate, Charlwood, Ifield Green and Lamb’s Green. We then savoured some newly spread tarmac at Wimlands, before settling just before 1pm on our imposing lunch-time perch at the Plough and Attic Rooms in Rusper.

We were warmly welcomed and shown to a fine, oak-beamed Attic Room, set up for a baronial feast. I did rather lack my former embonpoint to adequately fill the baronial chair. Food and beer (Rudolph) were good with nobody impatient to leave. When we did set off, it really was an ‘as the crow flies’ scamper for a leisurely tea and cake at Denbies, before taking advantage of some remaining daylight to find our separate ways home.

My number of the day, to parrot Jeff Randall, was 0. That represents the number of raindrops that fell to dampen our enthusiasm during the day. Good to see you all and goodnight.

Spring Tavern, Ewell to Richmond Park
The first ride of the New Year 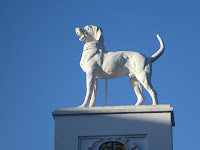 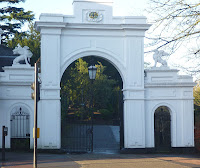 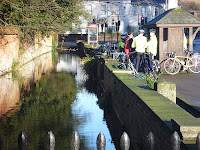 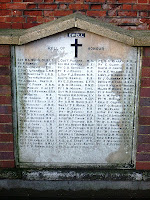 New Year's Day was a glorious exception to the recent weather; scarcely a cloud in the sky. Some were there by 1015 but Ed's merry band didn't reach the Roehampton cafe for another hour. They came a traditional way through New Malden and along Warren Road to Ladderstile Gate. With all the comings and goings the restart was chaotic; most spotted me heading towards Richmond but apologies to anyone left behind. Richmond Park were crowded as never before on these rides and our Staines rider was in waspish voice on the path between Pen Ponds and Ham. This year's tour of RBK took in HMP Latchmere House (vacant), St Luke's church (high), and Woodies (free house). Perchance our favourite Kiwi was lurking in the A3 underpass. After that the route was (more or less) as last year : Malden Manor omitting the offroad section of Royal Avenue by ‘popular demand’, Ruxley Lane and Pams Way. Three or four made their separate ways to Ed’s but there were never more than a dozen of us. A shame as there were mountains of food, too much even for our trencherman so thanks again Ed (with a large helping hand from Maureen).

Epsom's Tea Hut was a first for me meaning I missed the start! Apparently we all passed through Tadworth, down Pebblecombe, and into Betchworth. Here I diverged taking in the festively dressed teddies of Lonesome Lane before catching up with the other post Xmas revellers in Tesco Hookwood.

Donning a pilot's cap, I steered a course through Horley's shopping precinct, under the railway and into the countryside beyond. With a brisk westerly we were soon at the Bones Lane turn and shortly afterwards reached the Blacksmiths Head where a sign of times: our eight = two-thirds of the customers. Many settled for bar snacks: fatty and/or starchy like melted cheese on toast. The way back was Horne, Outwood and Bletchingley (easier on the legs than Tilburstow is my excuse). Rockshaw for our trimmest and fittest three, Merstham for our three tortoises was the prelude to a rendezvous at Fanny's. The recent rains were much in evidence but the day itself was dry with perhaps a hint of sun in the morning; 60 miles door to door. 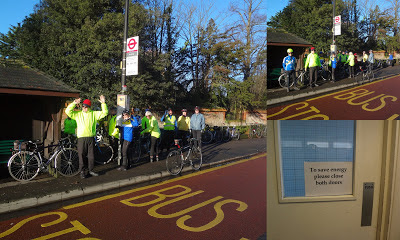 Well done Ed for the traditional C&M ride today. A good bunch was gathered at the Spring Ewell at 10am here seen completely blocking the Bus Stop. We proceeded to Richmond Park via Motspur Park and Laddersyle Gate some how or other losing big Niel & Cliff en route! Hope you are both OK?
On a more unusual note I was intrigued by the sign in the "Gents" at Cafe. Maybe its self evident but it did not seem to take into account the amount of energy put into opening and closing the door in the first place! Are we going too far in our attempts to save energy while forgetting that a small tree had to be cut down to print the notice etc. etc.?