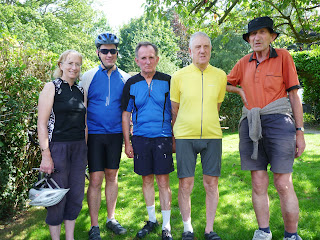 On a warm and sunny morn, eight found their way to Farncombe Boat House for tea/coffee and a jolly good bacon roll. Don and Dave then turned tail, while Richard led off for The Sands with four in tow and Bob as usual devising his own mysterious route. Farncombe Hill provided a bracing start on a journey via Hurtmore, Puttenham and Seale along some lovely Surrey lanes to the Barley Mow at The Sands.

Steph chose the crab and avocado salad while the rest skulked in the trees and sandwiched out of sight. The beer was dear. Our restart was via Waverley Abbey, followed by some map stops and head scratching as Richard resisted the magnetic field of Farnham in favour of Tilford. We then made an arc via Rushmoor and Thursley to Godalming, where Ed was lost to the lure of Wetherspoons. After a stretch along the A3100 the rest branched off for tea at Newlands Corner, while I headed on to Guildford and home. Our thanks to Richard for a pleasant ride and for me some 73 miles in the legs. 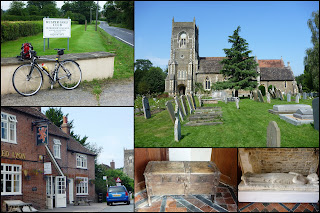 Eleven gathered for 11's at Rusper Golf Club, with a welcome guest appearance from Jake and from Keith, put together again after his fall. A smaller number set off led by Ed, who took us via Warnham and Broadbridge Heath to the Red Lyon at Slinfold. Most chose the company of the gravestones in the churchyard of St Peter's to munch their sandwiches in the sunshine, before retiring to the pub for a glass of water and some cooling shade for Ed.

After lunch we took the pleasant Hayes Lane to the A29 and then Haven Road to bypass Rudgwick along Lynwick St. Thereafter it was the usual route via Ellen's Green and Weare Street to tea at Capel Church. After a sunny tea it was choose your own way home. For Irene this meant that her last two club runs had been over 80 miles, so well done Irene!

Walton on the Hill to Reigate - via the Brockham, Leigh and Flanchford canal.

Waiting by the sun-dappled waterside at Walton-on-the-Hill were three sleek cyclists - Ed, Geoffrey and Paul. The proposal was a warm-up circuit in sunny Surrey leading to 11's at Reigate, before heading East. The gods had other ideas. After we had swooped down Pebble Hill, the gathering clouds released their first warning salvo. Shall we stop to cape up? Probably yes. Having topped Root Hill and turned towards Leigh, the spits and spots became cats and dogs. In no time shoes were overflowing, capes useless (Geoffrey doesnt have any truck with capes), and I began to wonder if I should have earthed the handlebars against lightning strikes. Lightning flashed, thunder cracked, the gods were not content. Cycling had become white-water rafting. There was little point in seeking shelter. Somehow we managed to reach harbour at Reigate to moor at Morrisons.

After a few minutes of baling out our shoes and sock-wringing, we dripped our way into the supermarket. No words were needed to agree where next. An unspoken understanding told us that our next port of call would be home. No further storm-battered venturer joined us - they were either still in port or lost at sea. We shall resume our course another day.


Post Ride Note:
In the light of a review, it has been established that the leader's navigation was adrift; he dropped anchor in the wrong port. Graham's and Terry's compass reading was accurate, despite the squally conditions, and they hove to at the specified destination of the Reigate Garden Centre. The Commissaire (Jeff) has accordingly adjudicated that the leader should be disqualified and receive nul points. There will be no appeal.

This Sunday's plan was to find our way to meet at the Denbies Bike Fest at Dorking to watch the women's Olympic Road Race. A 'phone call before I set off confirmed that Ed and Terry were already there. I found them without difficulty, as Pam and friend had arrived and provided a crystal clear homing signal. St John's Ambulance services were on hand to revive me with smelling salts, when I had to pay £2 to park my bike.

Now you see them, now you don't 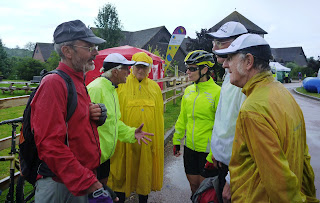 At first there was little interest in the big screen and cycling capes came out when the rain came down. We watched the race on screen until the riders were on their way to Dorking, then joined a migration to the A24 near the Denbies/Friends Provident roundabout. The riders and entourage flashed past; then we returned to the big screen to weather several heavy showers and watch the rest of the race and the final sprint - nearly blacked out by the rain.  As we were putting on our cycle clips, we met Keith, happily now back in the saddle, and Jake. Then it was time for our final sprint for home.