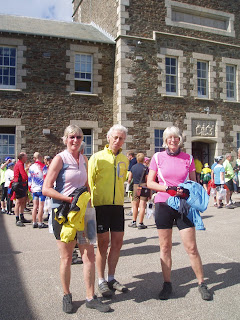 Andrew taking centre stage at Pendenis Castle for the Birthday Tea with twins Caroline (Beer) and Christina. I think Andrew met his match in height and good looks!

Welcome to David Leach on his second ride
with the C&M. 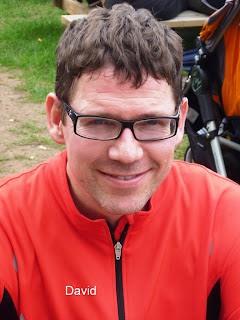 Elevenses was at Boulter's Lock.
...where the KPRC Easy Riders turned up just
as we were about to leave!
Simon decided to stay with us to stretch his legs. 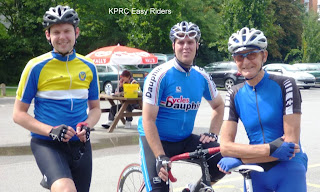 Locked out at Hambledon Lock, lunch at Aston
and tea at Great Cockrow. 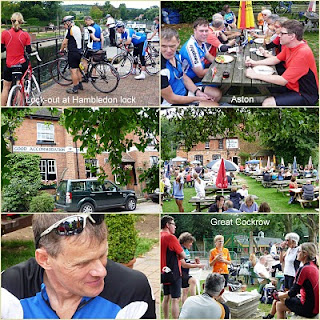 Our thanks to leader David W for a good long ride with no rain and apologies to Pete and Lisa! Distance on the doorstep was 94.65 miles.

It seemed a good idea to meet at 11s Boulters Lock (Jenners Cafe) in order to ride on to lunch and beyond, it all went astray 100yds up the road with a gap rapidly growing! Simon bridged the gap effortlessly we saw in the distance the last rider turning left at Cookham, when we arrived no sign of anybody, is it to much to ask for people in a group to make sure all are there before moving on? we turned left and followed the cycle route up Winter Hill wondering if the group would stop at the top, look at the view and get all together again, but no luck so we realised we had been abandoned and made our own way to lunch.
From Pete
Posted by Pete at 14:04 No comments:

Dear Folks I have committed to lead my first ride on the above day with 11's @ Henfold Lake. I now realise that the KPRC Hilly 12m TT and Hill Climb is on that same Sunday morning and so apologies for not keeping my diary properly organised.
I still propose to lead the ride but will not be able to start at Nth. Cheam, so please make your way to Henfold directly where I hope to arrive by the skin of my teeth by 11am.
If anyone is willing to be a standby leader please let me know. Lunch is at Bax Castle PH and tea at Capel. I will contact Bax C to inform of our lunch arrival.
Posted by mike morley at 20:31 No comments: 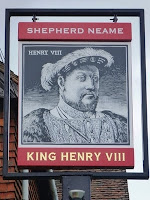 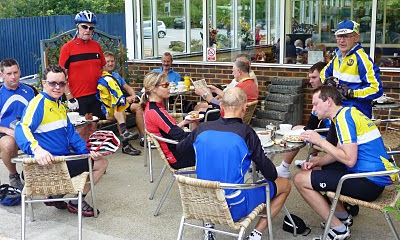 Lunch was taken at the King Henry VIII, in the shadow of St Peter's, Hever 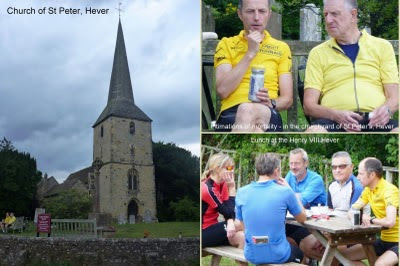 Tea amid the gravestones of St Mary's Tatsfield 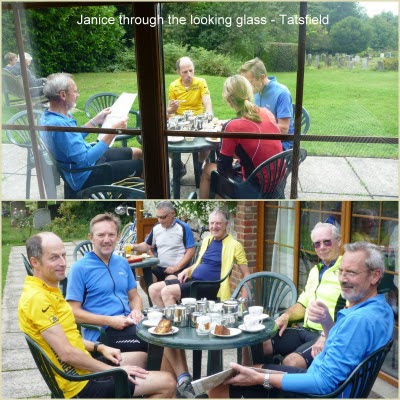 I'm sure that leader, Mike, will add a few words to tie these images together. 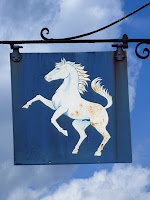 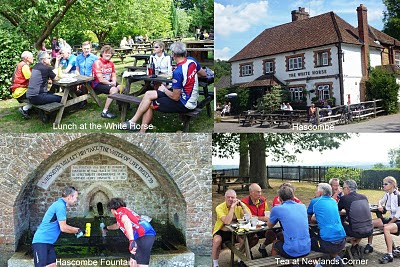 It was not the best of start: dull and only three at North Cheam; soon two when Ed "mechanicaled" at Hinchley Wood. I could think of no satisfactory route from Cheam to Guildford so it was Esher, Cobham, and the A3 cyclepath where we were spared the indignity of being overtaken by more of cycling's fledgings. We arrived under clear and warm skies and in good time swelling the group to ten (or so we thought). After many a Wetherspoons' breakfast, we arose only to be accosted by mufti Jake proclaiming that Jeff lurked in some deep recess and thus had missed the comings and our soon to be going. Swilling a fraction of his recent purchase, he joined for a detour into Littleton and Godalming's backstreets. The steepness of Holloway Hill surprised even the leader but there was no dropping the bunch as we climbed towards Hascombe via Enton Green. At the turnoff, glances at watches confirmed time to spare so more down and up meaning we reached Hascombe via Loxhill.

Our punctuality had its reward with a near empty pub and several feasts were soon landing on our tables. Within ten minutes of our arrival and courtesy of SWT, Ed appeared differently mounted quickly followed by Keith who'd came via the Greensand Way. A more direct return took in the pump, Thornecombe Street, Wonersh and, for the exercise, Blackheath. In Chilworth a mistaken right missed the llamas in Halfpenny Lane; instead there was the steeper Guildford Lane. Even diehard roadies managed the tracks to the Barn Cafe and a final scoff. Re the website discussion, can you spot any difference(s)? Around 70 miles door to door.
Posted by Anonymous at 20:24 No comments: 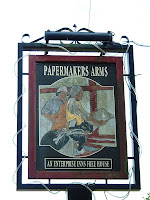 After a sudden outbreak of 'who's the leader?', I wondered if this might be a solo ride, with nobody to half-wheel except myself. In fact, Carshalton Ponds spawned a brace of riders looking for a leader - Janice and Keith. After a chat about the merits of glucosamine sulphate, we set off apace, with J &K chasing my tail like a pair of playful Jack Russells - a pattern that was to persist all day. They would not get tired. 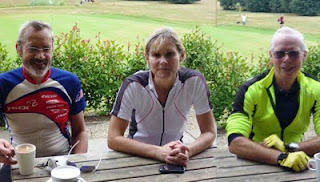 The way to Lullingstone was urban at first and mostly uprising. We passed the Croydon Flyover and West Wickham library, where my SERC clubmates were long gone after their 9am start. After Jackass Lane it was past High Elms and up to Chelsfield and Well Hill, to arrive at Lullingstone GC well before 11am. There were no additions to the family, but ample time for a very filling bacon sandwich. Off again, keeping to the tarmac, not the fairway, en route to Plaxtol. No risk of J or K half-wheeling me, so long as I kept turning left and right, as I was the only one who knew the way. 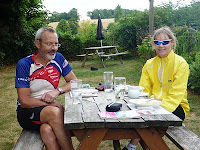 We passed through Shoreham (why are there always so many cars?), Twitton, Otford; followed the Pilgrim's Way awhile, then Seale, Stone Street, Ivy Hatch, Plaxtol and the Papermaker's Arms. Maybe the pace had been too easy, as our appetites were not that keen, blunted perhaps by the earlier intake, so it was straight into desserts. Janice was introduced to greengage pie. We ate outside, the skies still pretty overcast.

Well before the Pla 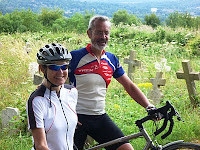 xtol parish church tolled two, we were off again, our tea-time target changed from Downe to Tatsfield. After Stone Street it was south of Sevenoaks, along Gracious Lane to Ide Hill, where Janice was disappointed not to clock up 40 mph on the descent to Brasted. After a further stretch of Pilgrims Way, we were struggling to make double figures on the ascent to Tatsfield Church. Tea and cake in the churchyard were followed by the helter-skelter down to Warlingham and Purley X. The heavy, aromatic fragrance of the lavender fields of Croydon Lane saw the parting of our ways. It had been a day of Kentish ups and downs with just under three score miles and ten recorded on the Cateye.

Fairoaks - Puttenham - West Horsley
Assembly point was Fairoaks Airport, with Dave Ward as captain on the flight-deck. My knowledge of the route is sketchy, to say the least, but with destination Puttenham, our flight path ghosted some of the previous Wednesday's ride to Wood Street. We passed Chobham and the lanes of Warbury and Clews, to come under heavy fire again beside the Bisley rifle ranges. Dawnay Hill led us to Pirbright, after which we followed the A323 to Normandy. A southerly tack took us to Wanborough an 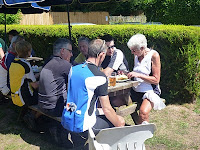 d the chance to mount the Hog's Back (I remember that), before descending half way down Puttenham Hill. Most braked for the right turn into The Street and Puttenham, though an enthusiastic few were already so intoxicated that they carried on awhile and had to climb back for a dressing down by the leader, to guide them to the Good Intent at Puttenham.
Paul at the top of Downs Lane 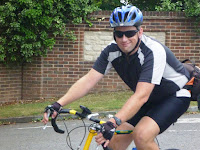 Food here, as ever, was first class and enjoyed in sunshine. However, when the time came to return, the leader allowed himself to be beguiled by siren voices. Instead of remaining faithful to his good intent, this pilgrim was seduced to abandon tarmac and the strait and narrow, to take the North Downs Way as far as Watts Gallery. A smooth climb up Downs Lane beside the A3 was followed by more chalk and flint before we regained the soft caress of tarmac into Guildford, where we dismounted to avoid the cobblestones.

The final flourish was a scoot along the A246 to Squires at West Horsley, with a delightful diversion along Blake's Lane, parallel to the main road, to bring us to the garden centre, where our leader left us to take tea, before then heading home. A distance for me of three score miles.