As there doesn't seem to be a plan for anyone leaving Thursday morning: Pete & I have made arrangements to leave from my place, meeting Terry & Joanne at Puttenham for lunch and staying at the Travelodge at Four Marks Thursday night. (Currently offering a room for £15, if booked online and paid for at time of booking - no refund for cancellation).
Anyone else is welcome to join us.

Coming home, Pete & I are again booked in at Four Marks (same deal).

Thanks to Lisa for her valued help in the technical department. Switching took less than 2 minutes.

Just 6 at NC for a straight forward route to Biggin Hill via South Croydon and Farleigh, with an ill judged "short cut" to join NCN route 23. Copious amounts of mud and the odd horse made this suitable for the MTBers only.
Being Kent, hills are numerous and in every direction including the humungus climb to the Spitfire cafe, a first for me after the demolition of "Scrambles".
Coffee - 60p, a proper greasy spoon.
With 3 remaining (Graham, Ed and myself) we made for Kemsing and lunch. Bob soon joined us and without a visit to the pub we set off again towards Shoreham, Halstead where Ed punctured.
After removing a stubborn thorn, tea was to be had at Downe.


Blog of the week: http://kimbofo.typepad.com/londoncyclingdiary/
Posted by Tartan Socks(long) at 16:44 No comments:

As those of you who have posted recently will know, Blogger has been pushing "New Blogger".
All the blogs have now been moved over to New Blogger, but this means (I think) that for you to post, you will all have to create "Google" accounts from your original Blogger accounts. It's a bit of a hassle, so my apologies, but in the long term it will be beneficial. I also think that the Google accounts will allow other possibilities with the club sites, so it is all for the best really.

I believe that next time you log in to post, with your old account details, you will be prompted to create a new account based on an email address. It seems to be fairly straightforward, but if anyone has any problems please get in touch and I will try to talk you through it.

Please make a note of your new username and password, as I will no longer be able to look usernames up for those who forget (I think).

Finally, anyone who hasn't yet signed up for the Blog and would like to, please email me for an invitation.

Cyclist who refused to stay in the gutter wins re-trial

A cyclist who was found guilty last year of inconsiderate cycling, whilst cycling in accordance with the National Standard for cycle training, has today won a re-trial at Shrewsbury Crown Court.

CTC member Daniel Cadden was cycling fast downhill on a single-lane carriageway when he was stopped by police who believed that the position he had taken in his lane was forcing cars to cross the solid white line in the centre of the road illegally in order to overtake. But rather than stop the cars that had broken the law, the officers decided to charge Daniel Cadden with inconsiderate cycling.

The judge and two magistrates accepted the arguments put forward by Cadden’s barrister, Francis Fitzgibbon, that there were contradictions in the police’s evidence, that there was no legal obligation for cyclists to use cycle tracks and that causing only a short delay to drivers did not constitute “inconsiderate cycling”.

The judge who sat at his first trial believed Daniel should have not been on the road at all and instead should have crossed three lanes of busy traffic to use a cycle path, which runs alongside the road where he was stopped.

Speaking outside court, Daniel Cadden said: “I am overjoyed that the ludicrous decision to prosecute me has been overturned. The recognition in this case must go to the real heroes, all those people who have supported it either financially by giving to the Cyclists Defence Fund, by joining CTC or by sending messages of support to myself and my family. Without the support of these people this fight would not have been possible. The overwhelming sum donated to the Cyclists Defence Fund has been testament to the solidarity shown by the cycling community on this issue. This success serves to reaffirm cyclists’ right to decide when to use cycle facilities and when they are inappropriate or dangerous. The first judgement was unreasonable in denying this.”

CTC’s Campaigns and Policy Manager Roger Geffen added: “This ruling is a tremendous victory, both for Daniel Cadden personally and for all the cyclists whose donations to the Cyclists’ Defence Fund have helped support this case. We hope the Government will now heed the voices of 11,000 cyclists who lobbied their MPs when a draft revision of the Highway Code threatened to enshrine into law the misguided views of the original police officers and trial judge in this case. We are picking up signs that the Government has been listening, so we hope there will be more good news on this when the new Code comes out later in the spring.”

Daniel Cadden was supported in his defence by the Cyclists’ Defence Fund (CDF), the independent charity which was founded by CTC to provide cyclists with support in legal cases. Over £25,000 was donated to the CDF by cyclists keen to show their support for Daniel.

To donate money to the Cyclists’ Defence Fund, go to www.cyclistsdefencefund.org.uk
Posted by Lisa at 16:12 No comments:

The Route That Jake Built

Down the Saturday wire the message came "It's closed"; "No worries Andy - an email will fix it" I replied. And so elevenses was reset for the Dorking Sports Centre. I'd like to describe the opening stages. But I was late (or so I thought); and worse appeared to follow when the level crossing gates was closed for ages. But along Ottways Lane Ashstead, I was hauled in by the bunch and we went the usual route to Dorking. By my reckoning we were Jake, Daphne, Ed, Florence, yours truly, Keith, Michael, Pete, Richard, Simon, and Steve. Here we were joined by Terry, Irene and Pam so the email had worked. After an extended stop, Pam and Simon headed for home.

An inspection of the one-way system was followed by Spook Hill. Then the Henfold route and a left turn after Newdigate church lead us into the Cudworth estate (not too muddy!). A right and another left took us into Orltons Lane and to a quiet Lamb in Lambs Green where most sampled from the menu. The brisk way back was Rusper, Newdigate and Pixham Lane to the A24 where Steve punctured on the Esses. There I departed leaving them to find Bocketts Farm and home.
Posted by Anonymous at 14:37 No comments:

Hotel for the Easter Tour to Salisbury:

It is with regret this post has appeared late.
This is due to the rather hectic festive season getting in the way of normal service and my inability to get "work, rest and play" in the correct order.

The AGM on the 10th was attended by around 25 of the usual suspects.
The most notable "area of concern" was the suggestion the C&M rides should be graded for severity (Richard D take note!).

Simon's ride to Edenbridge, a week later, was granted fine weather and lunch in the churchyard was very agreeable with just enough heat in the sun to take your gloves off to eat sandwiches.
The ride fragmented on the way home when Simon revealed his choice of climb over the North Downs - the wretched Titsey Hill.

Christmas Eve was a revelation in the support I received on this short ride to Stoke d'Abernon via Box Hill.
Clearly the fact that Ann brought along mince pies, shortbread, port, sherry etc really put everybody in a good mood with plenty to go around, even to the car assisted Pete Beyers and family at 11's.
Spirits were high so I used this to my advantage with the 2 mile track across Bookham Common to a quietish pub, Old Plough at SdA.
For most, thoughts of the following day's activities meant early departure from lunch to begin the build up to the big day & beyond.

New Years Eve was low key in both attendance and destination (Wetherspoons in Leatherhead). Thanks to Ed, Jake & Richard and already there Pete M, Ray, Terry, Graham, Pam, Irene to be joined by Keith.

Happy New Year
Posted by Tartan Socks(long) at 00:37 No comments:

The first submissions of their 2006 mileage are on the mileage table .

Send your totals to Pete Mitchell for inclusion (by email, text or phone).

And don't forget the Photographic competition - Pictures to your section Sec if s/he will take them or else also to PeteM. 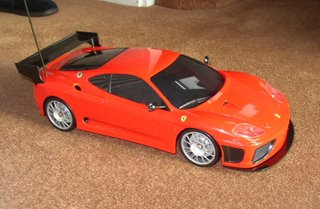 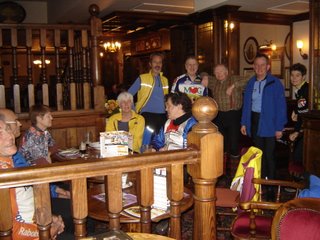 Celebration drinks at Weatherspoons Leatherhead
Posted by Ray Dare at 18:24 No comments: