This was another fine day though it took awhile to warm up. Eight of us (Graham, Ann, Daphne, Ed, Keith, Mike, Pete C, Steve) took the usual route round the back of Epsom before ascending to the top of Pebblecombe. After Betchworth, we went across Reigate Heath to the A25 and elevenses at Morrison’s. Here Bob and Ian joined us. On the restart it was down Lonesome Lane before turning east to Langshott and then via Broadbridge Lane to Copthorne. Pete and Daphne headed for home as he was feeling under the weather. Turning right out of Old Hollow, we went into Worth before joining the B2036. This is a rather busy road with a nasty 250’ climb to the top of Whitely Hill and the short descent to lunch (Cowdray Arms). We were thus well placed to tackle some roughstuff, namely Whitely Hill to Parish Lane. Very uneven but dry, this is in two sections divided by stream crossing and a railway bridge. The first section was downhill but the second section over compacted hardcore climbed more steeply – overall it was downhill. Two managed most of it but the rest found a hobbyhorse style or walking more appropriate. In Pease Pottage Mike rejoined having (perhaps wisely) opted for an onroad alternative. Next it was Colgate then Rusper and finally Tanhurst Farm where cakes were enjoyed in a desultory fashion. Around 65 miles.
Posted by Anonymous at 20:41 No comments:

The small turnout rather spoilt another fine day; just four (Ed, Keith, Pete, Steve) showing up at North Cheam. They rode via Tadworth and Mugswell to Fanny’s where Graham and Terry joined them. The break was lengthy but noisy as the clay pigeons were flying down the hill. Eventually we set off through Redhill and Reigate to Leigh, then climbed past Charlwood Zoo (as was) before descending to the Gate at Ifield. The Downlanders were there in strength but soon departed whilst our numbers rose by two (Irene and Pam). During another long (3 pints) break, the ayes voted for Capel and so it was a very short journey to church tea and cakes in the afternoon. We left after an hour and went our separate ways in Leatherhead. Around 55 miles at very leisurely pace - perfect!
Posted by Anonymous at 19:49 No comments:

For those suffering withdrawal symptoms (we've already missed three), the 2007 dates are: 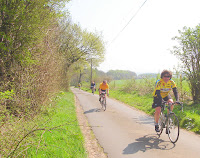 Panic stations and I can't find my keys,not in the usual place, it's 8:55 and the train goes at 9:30.
I arrived at Surbiton with 10 minutes in hand after riding like Miller in Time Trial mode.
Eight coaches arrived only to split at Woking. We were already over SWT's stipulation of 2 bikes per 4 coaches but that mattered little to the guard.
Four got out at Bentley: myself, Ian, Ed & Graham for the short ride to Forest Lodge Garden Centre near Birdworld. (We took a well surfaced path going SE past Alice Holt Lodge Research Station to join the A 325 just south of 11's where we met Steve who had ridden from Woking (21 m).
Sitting outside in the sunshine we talked of the enjoyable Easter weekend at Salisbury which was still fresh in our minds.
We retraced our route back to Bentley BR, Lower Froyle, Upper Froyle then NW to climb up towards Golden Pot (Photo).
Descend to Shalden then back up to Lasham and lunch.
Ann soon joined us and we sat under a parasol as the sun unleashed an intensity more akin to July than mid April.
A friendly chat with a quartet from the West Surrey CTC revealed their 11's (Odiham) and later tea to be taken at at Seale.
2pm and it was time to head south to Bentworth and Medstead before heading east to tea at Gilbert White's house tea parlour in Selborne where the delicious lemon sponge is £1.85 and the tea £1.40.
Just an hourly service means strict refreshment breaks or else lengthy waits on the platform.
Given the fine weather I knew the 16:20 was probably going to be a mad rush so the 17:20 proved more attainable.
Nearing the station, the 16:45 from Alton hurtled past with Steve and Ann aboard who kindly took the earlier fast service.
This part of Hampshire is in my opinion one of the finest cycling areas with good views, pretty villages, fine pubs and suprisingly little traffic on the wonderfully narrow lanes.
Total milage: 47.8 (from Ewell)
Ave speed: 11.7
Max speed: 46mph?
Temperature: 21 degrees
Winner of the Paris-Roubaix: Stuart'O Grady
Posted by Tartan Socks(long) at 16:23 No comments:

April's Friday Night Ride to the Coast was a bit of a success. We had moonlight. There was no wind. It was cold, but not too cold. 25 riders departed Hyde Park Corner at midnight. All 25 rolled in to Brighton. We weren't quick, but we had a good time. There were familiar faces and some newcomers. We had a recumbent, but, this time, no tandems. And Tourist Tony opened his door to us at 3 in the morning and sent us on our way warmed by food and coffee.

These rides have been very gentle affairs, with an open invitation to all to come along whether they were experienced or not, on whatever kind of bike. May's ride is a departure from this formula. The ride will be longer, hillier and faster than previous rides. Not an all out eye-popping blast, but steady, and with fewer rests. A rolling average speed of 14mph, over a 73 mile route. For those of you who haven't joined us before this is a group ride - we don't leave people on their own, and we do keep tabs on all the riders.

We'll depart Hyde Park Corner at midnight and go through Kingston, Esher, Cobham and Guildford. There is a tricky right turn at the Robin Hood roundabout, and we're going to have to have a plan if there is traffic behind us. There are two possible routes from Cobham to Guildford, and I'm inclined to take the A3 to the Burpham turn. This is a stretch of six lane road that we've used before, and it's pretty clear of traffic at 2 in the morning, but it will require a degree of cohesion and discipline on our part.

I don't have an absolute objection to people taking the midnight train to Guildford and meeting us there - it just means a good deal of hanging around.

At Guildford we stop briefly for refreshment chez Mr. Simon Page, who will accompany us for the remainder of the trip.

From Guildford we go to Godalming and then we take God's Own Cycling Highway, the A286. This is the finest road I know at any time of the day or night, but it does go up and down. Somewhere in West Sussex we depart from the A286 and make our way to the coast.

Arrangements are being made for breakfasting... The return to Chichester Railway Station for those of us not joining the EvilKiwi chaingang will be about seven miles. Trains depart Chichester for London at approximately quarter hour intervals.

Now - could I have some expressions of interest? The reason I ask at this early stage is that there are certain measures to be put in hand, and I've got to have an estimate of numbers...

June's ride will be a return to the gentle pastures of East Sussex - shorter, flatter and slower.

Follow discussions on this here - Lisa
Posted by Pete at 18:13 No comments:

For once someone had a plan and an unwieldy 24 (it seemed more) signed up. Initially their faith was misplaced as the leader set off in the wrong footwear and got lost before Wilton! Fortunately a rough off-road section of the Wiltshire Cycleway was on hand and soon we were back on course. 11’s were taken alfresco in Tisbury where the deli was open. Regrouping after Semley Hill we rode into Shaftesbury where most were content with hazy views from the terrace. Naturally others went in search of a liquid lunch and Mike M amused (?) the crowds by riding up Gold Hill. After lunch Zig-Zag Hill added a competitive element with the leader quickly reduced to also-ran. At the top we split up - some stayed onroad whilst the rest went on to Win Green. Another mile, another split - some descended to rejoin the waiting roadies in Berwick St John. This group continued down the Ebble valley to Broad Chalke where the open Queens Head proved irresistible. In time Pete and Lisa rejoined after a puncture and Simon and Jen appeared from the Salisbury direction. Meanwhile the off-roaders were “enjoying” the Ox Drove (said by Pete B to be paved). Untrue as it turned out and Pete F had a lengthy repair to a tubeless tyre. Eventually they too descended to Broad Chalke just as the back markers were leaving. For the record, the leader returned to Salisbury via Homington – around 50 miles.

A smaller but still considerable group set off up the Test valley and through the Woodfords to Amesbury where the Friar Tuck Café served as temporary home. After crossing the A303, the delights of Larkhill and Rollestone Camp were next before a brief stop outside the Bustard Inn. For the majority it was too early for lunch and so we went on past Westdown Camp to lunch at the Rose And Crown at Tilshead. The service was patchy – whilst Neil was delighted with a ½ pound Stilton Ploughman’s, Mike ended up with nothing* save donations of chips and a gingerbread man. At Gore Cross we turned off onto MOD land and Imber where there was a bizarre mix of daytrippers, and army cadets engaged in a mock battle completed with the crackle of gunfire. The leader was last to arrive - not unusual this weekend. The long and dusty Heytesbury road leads us down into the Wylye Valley and NCN24. Once again the ride came to a premature halt as the village of Stockton was staging its annual Pheasant (Egg) Chucking festival and of course the pub (The Carriers) was open all day! For the record the leader returned to Salisbury via Wilton without getting lost! – about 53 miles

* Leaving plenty of room for the 32oz chicken, which he consumed later that day. 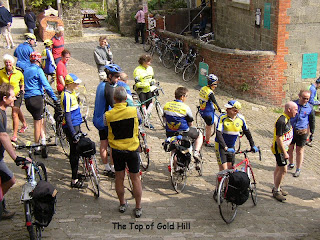 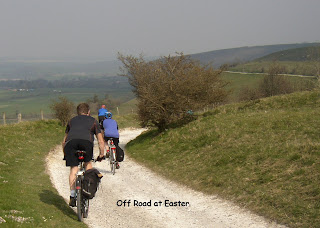 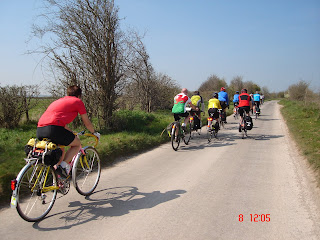 Many thanks to Simon and Jen for their hard work in locating the digs.
Also thanks go to Graham for his faultless routes and navigation.
It is also worth mentioning all the other C&M/KP members that made for a fantastic weekend.
The weather was the icing on the cake,can't wait till next year!
Posted by Tartan Socks(long) at 00:50 No comments:

Under half of the eventually 19 sunworshipers came the official route via Cobham and East Horsley to the Mucky Duck in Shere. That was far enough for some (Bob, Deanna, Pam, Pete M). The rest (Daphne, Ed, Florence, Graham, Ian, Irene, Jake, John, Keith, Mike, Pete B, Pete F, Steve, Terry) followed Pete C along Jesses Lane to Peaslake and then with half-hearted protest up Radnor Lane to the shoulder of Holmbury Hill. Descending we went past Ewhurst Green and the brickworks. After the Chequers at Rowhook, the A281 was sampled before branching off to the Greets Inn in Warnham. Here we were joined by Ann who had earlier competed the Kingston (foot) races. After seating ourselves, there was just room for 4 locals to prop up the bar! The route back was via Rusper where things hotted up. By Newdigate the leader was unable to catch the breakaways and only a hasty phone call brought the group back together. Tea was taken at Brockham Church, rather crowded with Easter Egg hunt competitors. A fine but hard day; the sunny, warm weather being balanced by a strong and boisterous northeasterly - not a day for hard lens wearers (as I can attest).
Posted by Anonymous at 19:32 No comments: