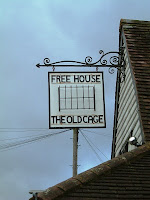 Ed led a small but resolute band, determined to fight the Xmas flab, from the N. Cheam home-base to the Tesco Emporium at Hookwood. Bob, as ever first to arrive, awaited the laggards: Ed, Janice, Keith, (apparently sweeping up Mike at Walton), and lone rider Jeff. After a lengthy stay over an inflation busting breakfast, Mike beat an early retreat with his photographic memory of the ride, while the rest, bar Bob, struck out behind leader Ed en route for Lingfield. Bob had his ways to get in front of us! The day was dank and dark but rain-free; the ride untroubled by hillettes, took us smoothly to the Old Cage at Lingfield, quiet on our arrival. 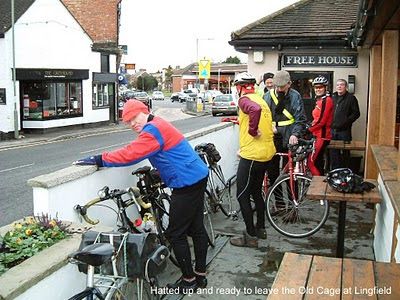 There was soup, sandwiches and beer to sup for some, until we glimpsed the Lone Rider of the Apocalypse, Andy, gliding past outside, first one way, then another. A bellow halted him, but he broke his bread in the Lingfield Cage before joining his companions.

Another lengthy stay before we set off again, the tea-time venue changed from Redhill to Fanny's Farm Shop. Janice and Keith soon disappeared, the threat of a lightless sundown looming. Bob went his way and the rump rode on to Fanny's. Markedge Lane revealed no trace of the top of Andy's bell, shaken loose on the outward journey. 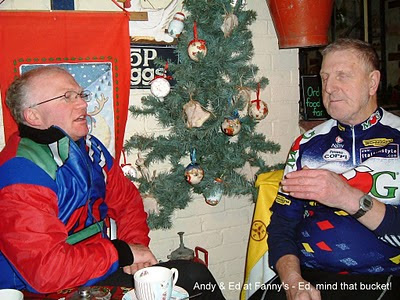 After Fanny's warm, enveloping embrace, it was lights on and into the gloaming for the final homeward furlong. Our thanks to Ed for an enjoyable and relaxing ride with a modest 38 winter miles to add to the tally. 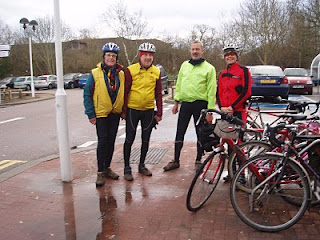 The Hardy 3 from North Cheam + me met @ Walton Pond 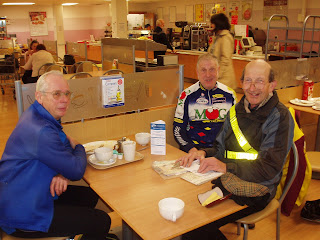 Breakfast, with Bob 1st to arrive and Jeff with leader Ed. I then departed for more partying in Acton !! What? 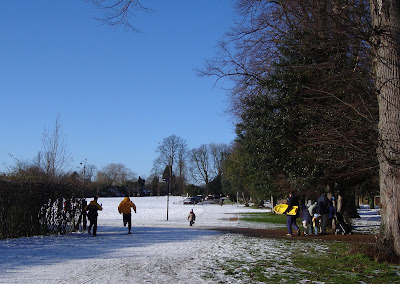 Call me foolish,ambitious,crazy..........point grabbing.........some did make it Reigate Morrisons.
Thanks for your company Bob and Merry Christmas to one and all.

Picture a snowy Priory Park,Reigate.
Posted by Tartan Socks(long) at 19:18 No comments: 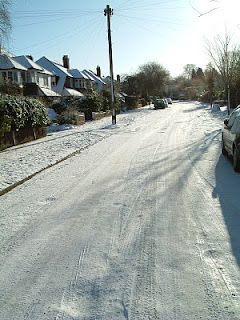 Call me unadventurous, over-cautious, a wimp, a big girl's blouse, a scaredy-cat, but I am still not going out on that! Apologies to Ann and Steve, but the lure of mince pies and good company around the fire could still not overcome my sense of self-preservation!

P.S. Mark seems to have cracked the proplem with snow tyres - see the MWW blog!
Posted by Jeff at 16:46 2 comments:

With the current icy conditions and deep frost forcast for overnight, Steve is re-considering the plans for tomorrow. He plans to go to North Cheam to see if there is anyone there, but possibly not to Reigate for 11s. (I haven't checked what the runs list actually says).

Anyone wanting to minimise exposure to the elements tomorrow is welcome to head directly to Ann & Steve's for tea. 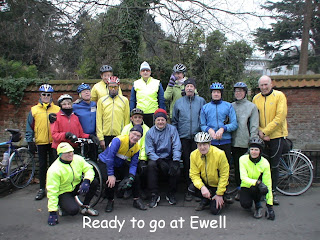 The ride starts from The Spring Tavern at Ewell 10.00am. NOT AT North Cheam
Posted by Pete at 06:55 No comments:

After recent rides, Sunday came as a pleasant surprise - bright, partial cloud, cold, very occasional light showers. Just four at the start so we took a direct Lower Sunbury, Shepperton and Laleham route. In dribs and drabs others arrived finally making ten to sample Irene's mince pies. It should have been eleven as Richard was seen passing on the towpath at least twice; Irene went a-searching but must have frightened him off!

Middle Hill led into the Park and out the other side to the Peanut. Then familiar roads took us to the Cricketers at Winkfield where we were greeted as old friends and found the public bar armchairs much to our liking. On leaving seven dropped to five as we hurried past Ascot racecourse and Cheapside in gloom to Blacknest Gate and Sunninghill. A few spots of rain greeted us as we joined the Xmas throng at Tesco Addlestone where there was a parting of the ways. Short and distinctly not stressful.
Posted by Anonymous at 12:04 No comments:

Whatever weather forecast you chose, when you looked out of the window at 8.30am, it was raining with persistent intent. Gritted teeth and rusty resolution are what it took to don the wet-weather wear and head due north along the flooded A217 to 235 650. To my surprise, three equally determined figures were awaiting my arrival: Stephanie, Mike F and a welcome new face Tim, waiting for his call up papers.
Soon we cast off, stopping shortly for the leader to take off his shower cap. Then on through Cheam, Sutton, Wallington, S. Croydon, a climb up Coombe Lane beside the tram line, down Gravel Hill and the long climb up Featherbed Lane and Beddlestead Lane, with the floodwater gushing down on both sides and the occasional dead sheep floating past. The final swoop into Westerham brought more flooding, with gleeful motorists seeing how high a bow-wave they could raise and bringing out the more colourful side of Mike's vocabulary. 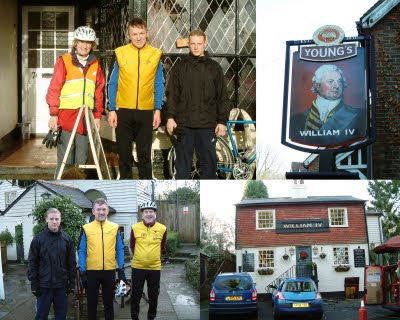 After scrambled egg and bacon sandwiches, the sun now shining, Steph headed west and the rest south up Hosey Hill for a circuit via Crockham Hill and watery lanes to Tilburstow and Bletchingley. Half way up the hill into Bletchingley a shout of welcome from Ed, taking a sandwich and watching the world go by on the A25. We met up and dried out a bit in the William IV, where some scrumptious bread pudding was on offer, made by one of the locals. Mike then headed home while we kept to the plan of tea at Fanny's. With the light still with us, it was the parting of the ways.
For me the distance nearly fifty, the altitude I know not, but a good deal of the mileage was under water.
Jeff
Posted by Jeff at 00:11 No comments: