It didn't start well with a p*n*t*re beside the A3 but a passing Steve ensured that the start was delayed until my arrival. After the previous Sunday's crowds, only four (Ed, Graham, Michael, Steve) followed the titanium-mounted Keith over the hills to Woodmansterne, Farthing Down and Woldingham (Lunghurst Road) before the plunge down into Westerham where Winnie made for a impromptu bikestand. Already at the trough were Andy and Bob. We took a direct route via Four Elms but were still beaten by Bob to Chiddingstone where forces divided between the churchyard and The Castle Inn where Ann joined us for lunch. The return skirted Hever and toured Edenbridge. After Marlpit Lane it was back to lanes catching Bob (how does he do it?) just before Limpsfield. The Wetherspoons in Oxted provided drinks and muffins, and before long we were headed towards the track through Woldingham School. Here rain started to fall steadily causing a parting of the ways. I reached home damp after 73 miles - a long and hard day.
Posted by Anonymous at 11:23 No comments:

Very cold late start at North Cheam , due to Emmas friend Misha,s train being delayed.
Met up as arranged at Tadworth cross roads with Florence and Pete Byer.Then across the A217 up Chipstead and down past 2 tandems at Fannys Farm. Met up with rest of club at Priory Farm in the warm sun. 20 people on ride now , including two new boys called Adam and Arslan. All down hill along lovely lanes to the Plough pub at Leigh , where we had sandwiches in the sun. Lost the 2 boys on the race to the pub , but Daphnie phoned directions to them. Straightforward route across country to West Humble station , where most of the group left for home. 7 of us forked right by an arch and climbed up and up in to the trees. Lovely views of Box Hill. Turned left after wood yard and dropped down very rough track to Bockets Farm , Antonio said all his fillings fell out ! but when he smiled all was ok !
Met Simon and Jen for coffee in the evening sun . Perfect !
From Jake
Posted by Pete at 06:51 No comments:

2008's was another triumph for the spielmeister and a host of Souwesters posing as officials. Provisionally the rider count was just under 200 and all but a few finished in under four hours. First back was Gary Dodd in 1:50 although two Norwood Paragon late starters swear they were quicker - we believe you! Mike won a close Wayfarer contest from Neil and Toni. For C&M Keith was first home with Tony among the backmarkers after exploring part of Surrey Hills unreached by other riders. After starting the event Simon toured round in a group which included Andrew. The free food and drinks were voted a hit; the 50 Salisbury's pens for 99p were not!

Posted by Anonymous at 20:27 No comments: 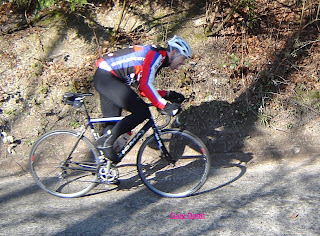 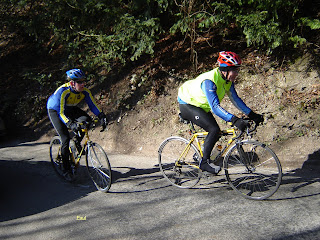 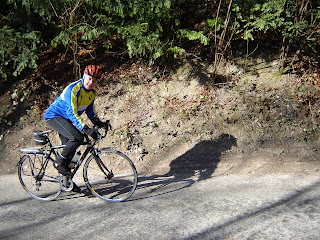 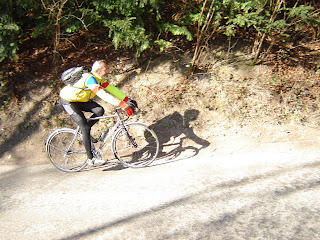 A few pictures of Gary, Paul, Steve and Keith ---others stored
Posted by Ray Dare at 18:31 No comments: 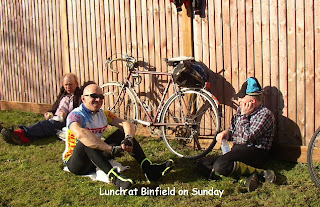 When first it appeared in print, I feared that this might be a ride too far. But a glorious spring has come early this year so my concerns were unjustified.

It was frosty as we huddled on Kingston Bridge but we soon warmed up due to my deceased speedo. The route was circuitous taking us through Thames Ditton, Walton, Weybridge and Virginia Water. We entered Windsor Great Park near the Wheatsheaf (A30) - a novel approach to Savill Gardens but taken at a crawl as many of the many visitors had not mastered the "keep left" principle. By now our number was 13 but only a select band of eight headed back across the park to Cheapside. After Ascot racecourse we rode west along the B3034 into Binfield. Of the two CAMRA pubs, the Victoria Arms got a cursory look and we settled for the Jack O'Newbury(no bar snacks). Here we sunbathed in the gardens; most nibbling discretely food brought from home. Later we were joined by Lisa.

The return was more direct taking in favourite lanes through Moss End, Nuptown, and Maiden's Green before the long haul up to the Park, where again we met up with the awkward brigade. After a swift descent of Tite Hill, tea was taken on the terrace of North's of Staines before dispersing. Another (minor) tumble whilst looking backwards suggests that I should leave such antics to Janus. Nearly 60 miles but home before 5 on a day perfect for cycling.
Posted by Anonymous at 12:21 No comments:

A plethora of bikers out this morning including John M who I caught just before the White Down descent.
An (always) crowded Lucky Duck but I managed to pull a chair up to join Bob,Terry,John & Dee.
Both Petes and Irene surfaced followed by leader Steve,Ed,Graham,Mike,Tony,Pete & Daphne.
After a coffee and 2 refills(£1.80)it was an all male affair for the short hop to the Little Park Hatch nr Cranleigh.
Most were attracted by the sit down menu including your C & M Sec,although not me.I was happy enough in the untidy garden,sitting on one end of a see-saw.
The resident caged birds seemed content albeit one seemed to have an unhealthy appetite for the plastic windbreak.
Graham took to selling Tanhurst Lane as the obvious route over the hill with almost entirely everybody suffering as a result(Did I see the leader get off half way up?).
One of my favourite descents (from Coldharbour) and Dorking where I parted company to get my barnet cut,the rest opting for Denbies.


The photo is from 07/10/07 -Shepperton Lock.Sorry for image quality-it's from a negative.
Posted by Tartan Socks(long) at 18:09 No comments: