The forecast wasn't great but I saw the backs of many riders on the way to 11s, and several coaches suggesting it wasn't a day for taking the train.  I was surprised by our double figure turnout at West Horsley but reminded of games days - one excuse after another left just three willing to carry on. When I phoned through the revised count, the landlord didn't sound too pleased so I thought it wise not to mention Dave's likely packet of crisps. 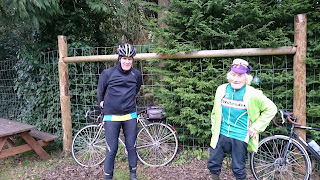 We began with the long downhill to Grove Heath Road before crossing the A3 and along the path that runs beside it. I hadn't surveyed this part of the route so an illegal right turn at the end of Clay Lane got us onto the A320 and off  it 100 yards later. Burdenshott and Goose Rye roads led to Fox Corner, and two more lefts saw us at The Royal Oak Pirbright by 1225.

Service was prompt and departure was around 1315. In Fox Corner, we stopped briefly to don waterproofs  (soon unneeded). After Mayford I decided on a variant: the Kingfield stadium and through Woking Park to desirable parts of Woking. These disappeared as we descended towards the canal. A right took us through Sheerwater and West Byfleet. We dropped Vic outside "La Maison Blanche" declining his offer of tea before continuing to Addlestone (gates closed) and Weybridge where our ways parted.

Definitely what northern parts call "dreich" but the forecast rain didn't amount to much. Just over 50 miles door to door.

Posted by RaasayWarden at 11:49 No comments:

Discount code for CTC members, no discount for Seniors!

An email from British Cycling

Dear cyclists from cheam and mordem
Welsh Cycling Events are delighted to offer you an exclusive 30% discount on entry into tthe Cambrian Coast Sportive 2017 as part of the membership of your cycling club. This discount is valid if you enter before 28th February and becomes 10% thereafter until the month before the event. Please feel free to circulate this email to your members to take advantage of this exclusive offer. Enter here.
The Cambrian Coast Sportive takes place on 16th September 2017 in some of the UK's most spectacular countryside. Starting from Aberdovey and set entirely within the Snowdonia National Park, the routes follow the coast and beaches, climb the mountains, skirt around lakes and descend through forests, making this arguably the most scenic sportive ride in the country.
Posted by Tony at 16:08 No comments:


I had a phone call at around 8.30am from Alan asking me if we could meet and cycle to 11's together, I agreed we could meet at Isleworth fire station and he agreed, 10 minutes later he phoned again after looking at the weather and said he would meet me there; he never made it! Well it was raining when I left home to cycle the 10 miles to Vermeulens and was still raining when I arrived.

Vic was already there and we were soon joined by Bill and Margaret, soon after Pam and Brian Bent arrived. We sat chatting and drinking coffee but the rain never stopped and we decided to call it a day, the weather forecast did say it could clear later but along with the cold it didn't make for pleasant cycling.

I returned virtually the way I had come and only managed a meagre 20 miles, I was glad to get in doors and dry out and warm-up and listen to the pitter patter of rain on the conservatory roof with a nice bowl of soup.
Posted by Tony at 13:55 No comments:

The lunch venue will NOW be the Emperor pub Farnham Common

Pub link please click
Posted by Tony at 13:04 No comments:

...I will not be taking part in the official ride from Vermeulens but checking out my next lead from The Vineries, Effingham to The Scarlett Arms, Walliswood with tea in the Dorking area. If anyone would care to join me on this ride I plan to leave Effingham soon after 1100.

To supplement Tony's photographic record, to acknowledge GFH's indisposition and to satisfy what we know to be his need for completeness, here are just a few words to thank Dave for his inn-to-inn leadership on Sunday from the Edmund Tylney at Leatherhead to the Bull's Head at West Clandon. Some 15 riders graced the E.T. with guest appearances from Maureen and Cliff. With our lunch at no great distance, we had time for a coffee-refill and chat before setting off for W Clandon via Fetcham and the Horsleys. With no chevrons to trouble us and no greater challenge than a concrete farm track, we reached the Bull's Head without too much heavy breathing. The pub was busy and our number perhaps exceeded their expectations, but we were all squeezed in and served, though one toasted sandwich was declared MIA. Tony's photographic evidence exposes one lady who received her just desserts.

The postprandial plan was to head for Addlestone. As I chose an early homeward option, I'm sure that all enjoyed their tea-time brew, before high-tailing it for home.
Jeff
Posted by Jeff at 12:00 No comments: 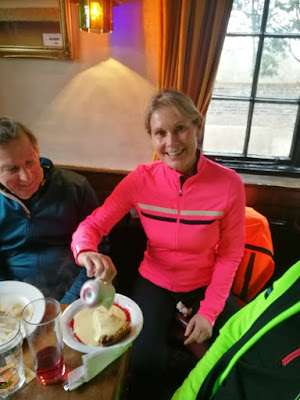 Someones missing the Mince pies!
Posted by Tony at 21:26 No comments:

How far did you go in 2016?
Too late now to add that extra mile for 2016.  By now you should have  zeroed your Cateye or Garmin for 2017. Please let me have your mileage for our annual mileage chart, whether it be breathtaking or simply sensible, like mine. Over time it makes an interesting and enlightening record. For the lady and gentleman who come out on top, there will even be a gong. So do not be shy and hide your mileage under a bushel. Write it down and let me have it!
Jeff
Posted by Jeff at 19:25 No comments:

About a dozen assembled for Ed's sunless, windless, almost rainless run to Richmond Park via Kingston and district suburbia. We joined others who had ridden directly there and had refreshments and chat. Unfortunately Graham was unable to join us (bad back) so Ed led us back to his house via a similar route.

There, thanks to Ed and the lovely ladies who provided the lovely food we had a very enjoyable lunch, followed by even more chat and a slide show from Ed.

Eventually we decided to leave (no, there was a little food left) but upon looking out of the window we saw the rain that had been forecast - it was simply 'running late'.

Many thanks to Ed for leading the ride and hosting the lunch.

Fortunately for me it is not very far from Ed's house to Epsom station where the next Dorking train was only running two minutes' late. 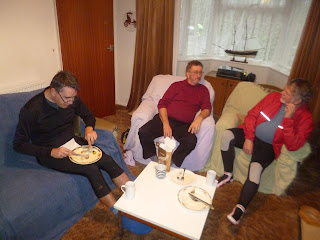 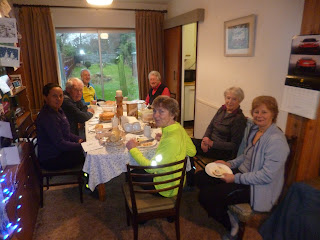