Ed will be at West Horsley for 11s and at Wetherspoons Guildford for lunch. He'd welcome your company if you've nothing better to do!
Posted by RaasayWarden at 09:55 1 comment:

To avoid the deluge of fitter riders, we headed north into Bushy Park. After the wheat and sheep of Felthamhill we continued on familiar ways round the east and north of Heathrow (Feltham YOI, Bedfont, Hatton Cross and Harlington). After Yiewsley, Dave produced a novelty - the long closed Uxbridge Vine Street branch line which took us past Brunel and into the very centre of Uxbridge. In time our numbers swelled to nine as we breakfasted in Wetherspoons (The Good Yarn).

Two squeaky (for anyone in cleats) bridges over the Denham roundabout led to a sketchy track south of the M40 which we soon crossed to Tatling End. After the M25, our (moist) route lay southwest towards (but not into) Fulmer where Alan departed. From southern Gerrards Cross, the aptly named Hedgerley Lane led directly to The White Horse just before 1230. There we dined under the awning though in truth the pub was never busy during our stay.

The return was familiar: Slough's outliers (Stoke Poges, Wexham, George Green, Langley) then across the A4 into Colnbrook, Poyle (usual litter) and Stanwell Moor. Vermuelens was closed for the day so we called it quits. 35+ miles from start to Vermuelens on warm but tiresomely blustery day.

The church of Saints Peter and Paul at Chaldon, in Surrey, England was built before 1086 and contains a large wall painting of around 1170 depicting images of the ways of salvation and damnation and their result [a] and is in length 17' 2". Malden in 1911 described it as "perhaps the most interesting ancient wall-painting in England".[1] This Grade I architecturally listed building [2] retains its west and east walls (of nave and of chancel/chantry) of their original dates, both with "extraordinarily high-pitched" gables, round window in the west and three windows in the east.[1] The mural is divided in two by a cloudy band, with the lower half decorated to torments and punishments of the wicked; the upper half devoted to the judgement and salvation of souls. In the centre is a ladder with Jesus Christ above. The main figures include the Tree of knowledge, with the Serpent (bottom right), the Seven deadly sins and a cauldron for boiling murderers. Across the top are depicted the three Marys and the Ascent of Elijah and Enoch to heaven, Jesus defeating the Devil, and Jesus preaching to the spirits in prison.[2]
Nathaniel Westlake wrote:[3]

It is evident that this painting was the work of a very studious man, probably one of the learned monks of Chertsey, and the school of the art of this monastery here finds valuable illustration for comparison with that of Canterbury, Winchester, Lewes and Durham. 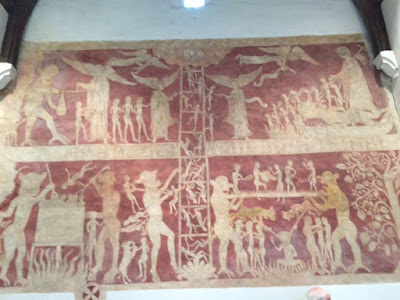 Several fundraising bike rides take place between London and Brighton each year. The most famous is the British Heart Foundation event which has taken place each summer since 1976,[1] and in 2014 involved an estimated 30,000 riders. Despite most roads being closed to cars, the number of bikes is such that traffic jams occur, especially at hills. The toughest part of the route is the climb over Ditchling Beacon which once featured in the Le Tour de France; having already cycled some 50 miles (80 km), cyclists must then tackle a 1 mi (1.6 km) climb with an average grade exceeding 1 in 10. Several sections are somewhat steeper, and whilst the fittest will try to cycle up, the vast majority will walk. To date, over 650,0000 riders have taken part and have raised over £40 million so that the BHF can fund pioneering research, patient care and the provision of vital information. In recent years, the BHF have introduced a night ride and an off-road ride. These are on separate dates, and some competitors will ride all three routes in the same year. 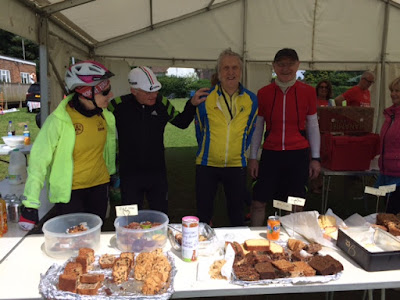 Posted by Tartan Socks(long) at 18:52 No comments:

Not in a fit state for East Grinstead.

Early lunch Chequers,Walton on the Hill.

Posted by Tartan Socks(long) at 16:02 No comments: 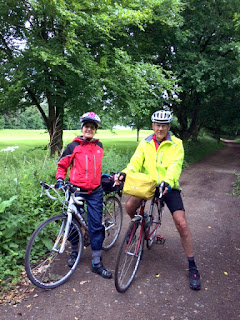 A dozen hardy(?) damp souls met at a new (to us) venue (Domestique, Great Bookham) for 11s. At departure time Pam, Rachel, Tony and Donald headed for home. After a brief discussion the unanimous decision was Leatherhead Wetherspoons for lunch. A somewhat circuitous route via Bagdon Hill, Chapel Lane and Old London Road brought us to the A24 at Mickleham where we joined the cycle track. After passing through Leatherhead Leisure Centre we briefly joined the Cobham Road before turning onto the track taking us past Fetcham Mill Pond and the model railway site thence to Wetherspoons.

After a long lunch break with interesting conversations including gigabytes, megabytes, insect bites, the Flying Scotsman, insecticides, trepanning and military nursing, Ed, Bob, Roger, Vic, Dave W and Ray W decided to head for home leaving Lilian to accompany me (in the dry) on a cake hunt. A quietish ride along Highlands Road, Reigate Road and Headley Common Road was spoiled by two police cars hastening to what turned out to be a car which had stopped off road wrong side after demolishing part of a fence. An apparently unhurt cyclist appeared to be giving a statement. A quick descent of Pebble Hill led to Brockham where we felt obliged to check out the Victoria Sponge and Lemon Drizzle Cake. They passed. We parted at Dorking.

Apologies but I won't be out today.

Andy
Posted by Tartan Socks(long) at 08:14 No comments: