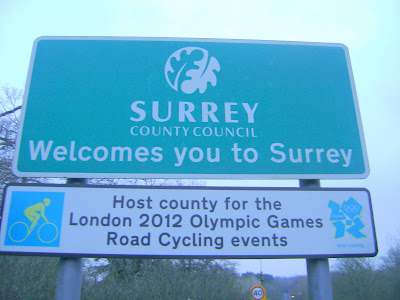 Posted by Tartan Socks(long) at 21:09 No comments: 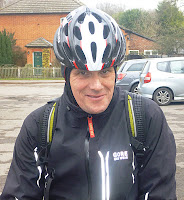 Our thanks to leader Dave (or was it Rides Sec Andy?) for introducing us to the Golden Café (formerly known as Muffins)
in Addlestone, where it was standing room only...

.....and for a bracing ride to Pirbright for lunch, followed by tea in chilly sunshine in Stoke d' Abernon at Squires
(the garden centre formerly known as Shoots)

Ready for the off after lunch 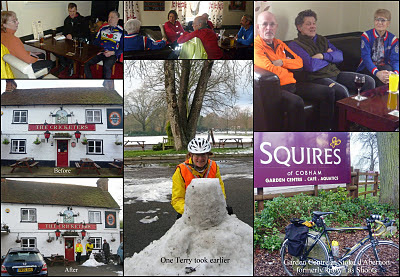 The weather can change very suddenly in these parts
Jeff
Posted by Jeff at 16:45 No comments: 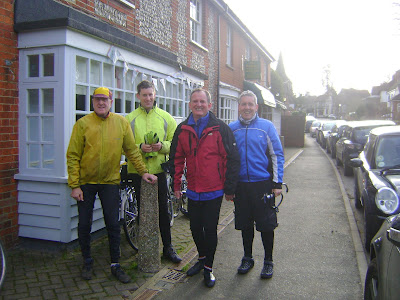 Outside the café in Downe. 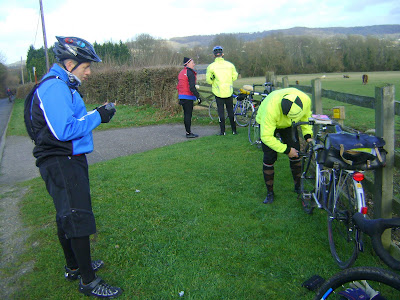 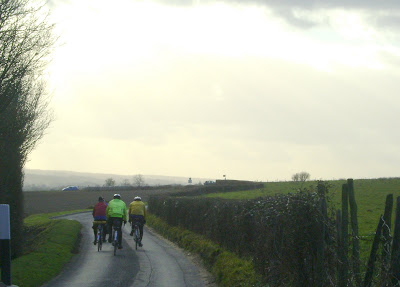 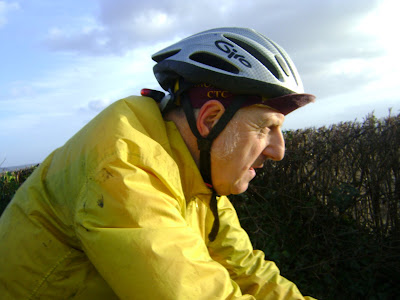 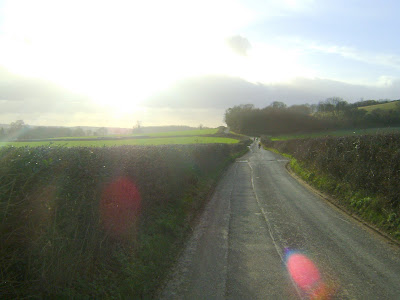 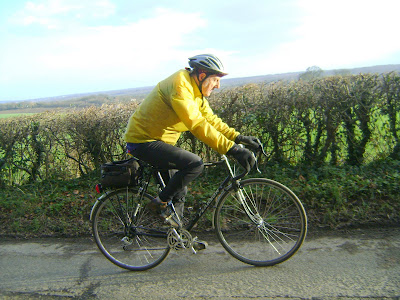 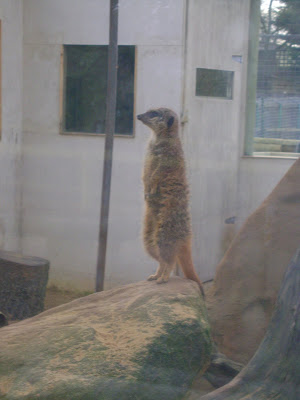 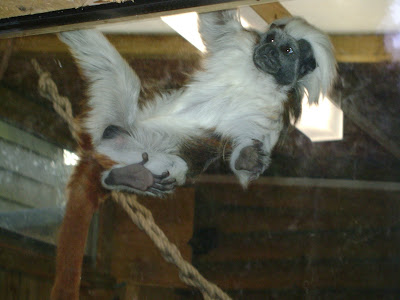 Tamarin
I cycled past Carshalton ponds at 9.50am so already 30 minutes behind the club.No worries though as Richard was leading and I suspected he would take a more devious route to Downe.
The café with no name is a lttle cramped but ok for our small group of seven.
Welcome to Gary Bonsall from Wallington,a regular with the Pollards Hill crowd.
The route to lunch was pretty straightforward via Knockholt, turning right downhill to Sundridge,Bessels Green and lunch at The George & Dragon,Chipstead arriving at 12.24pm!!!!
I had to pass comment on this (rare) accomplishment as Richard has a nonchalant attitude to time.
It was interesting to hear from Gary his experiences with the Pollards crowd - quite slow,very urban & no rides over 30 miles...............ever!
We were away well before 2pm which was just as well because I suffered a front tyre blowout and the leader had amnesia just north of Riverhead.We found ourselves on a slippery footpath trying to find the lane that goes to Otford.
Back on route along the Pilgrims Way had me thinking how Richard was gonna get to High Elms,surely a mountainous hill is inevitable?
But no,unknown to me,we were confidently heading toward Tatsfield's "WaterBeaverWorld" for tea.
No-one waited at the junction to the church so leaderless,myself and Ed followed our noses to finally arrive..........but where's Richard?
I took some photo's and Ed ordered the tea..........still no sign of them.
After 20 minutes they arrived puzzled at how we had beaten them.
It soon emerged that they had gone uphill to the further right turn (signposted) and waited for us and Paul alledgedly cycled to the bottom of the hill to look for us.
We all kept together for the return until Gary & Richard peeled off in Stafford Road.
Note: If you ever feel the inclination to visit WaterBeaverWorld,be careful where you leave your bike.The zoo's owner is unconnected to the café and will tell you in no uncertain terms where to put your bike!!!
Posted by Tartan Socks(long) at 20:49 No comments: 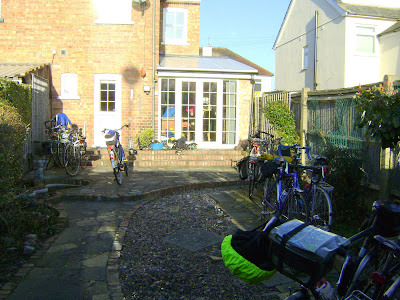 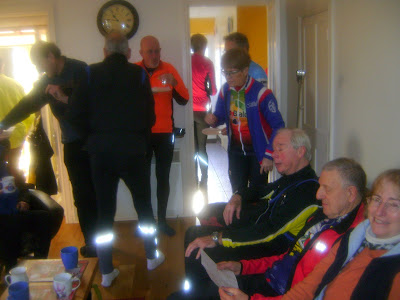 Grateful thanks to Pam & Irene for making sure we were fed & watered. 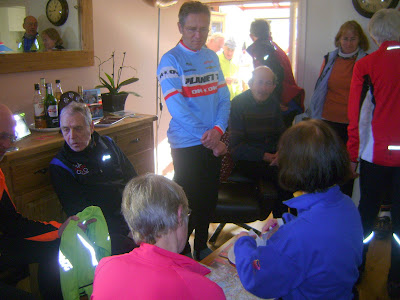 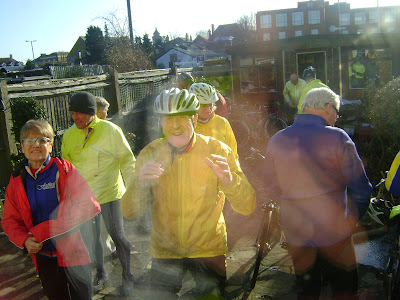 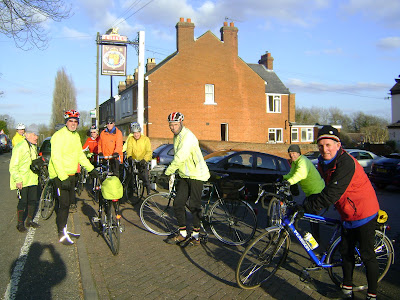 Despite the sunshine,it was probably -5 windchill. 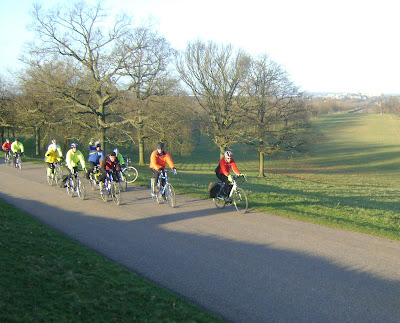 Windsor Castle in the distance. 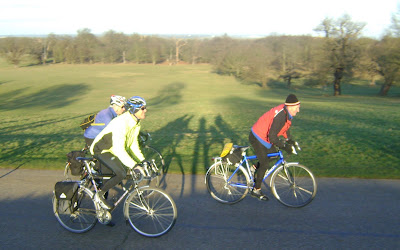 What a fantastic day!!! A frosty start did not deter several hardy riders from making their way from Kingston Bridge to Egham, kindly led by Graham. Was it the lure of sausages in crusty bread and tea and coffee that bought them out?! I don't think so....but it was a very sociable elevenses with 19 people in my little house (so I was told)!We eventually got away before 11.30?
I'm sorry, but I'm not sure of the number for a few of the gang were unable to stay out all day, I think it was fifteen!Our route to Binfield was a well trodden route for Irene and myself (yes-and others)...up Egham Hill, Middle Hill and into Bishopsgate, across Windsor Park, exiting at Cranbourne Gate. From there it was a right at the 'peanut' roundabout, (so many daffodils in bloom?), left at the next roundabout, 1st right, 1st left towards Maidens Green and then a couple more turns which took us past Moss Green garden centre where we did another right and left etc. eventually rolling into the Victoria Arms pub in Binfield before 1pm.
Unfortunately,the publican did not reserve any tables for us, but not a tragedy for he put the heaters on in the marquee so we did not spend our lunch time shivering!! The food was served quickly and pleasantly and I believe we were all well satisfied with our orders. My soup was more like a bowl of 'hot-pot' - oodles of it!!
Nearly 2pm, time to go, (after the group photos)! Downhill to start with then a drag up Cabbage Hill making our way towards Moss End our route took us into Westhatch Lane, Church Lane, Malt Hill into Haley Green, 2nd right, Forest Road through to Hatch Lane, Lovell Lane and so back to the 'peanut' roundabout where we retraced our steps through the Park. Time was not in our favour at this point as far as getting to Halliford for tea, hence we stopped at Notcutts between Staines and Laleham.Ten of us stayed to chat over the day, plus many other subjects....and it was after four when we all decided it was time to make a move and continue with our journeys!
A very, very enjoyable day - thanks to all for making it so!
Pam :-)
Posted by Tartan Socks(long) at 21:27 No comments: 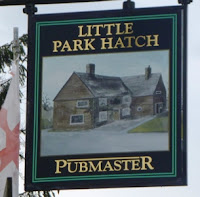 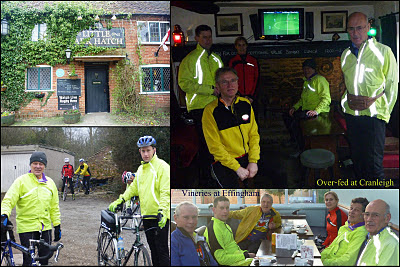 Despite being very mild though dull, I decided "shortest is best" though we did detour to Chez Janice for a change of gloves. So it was A24 from Cheam to Ashtead, Craddocks Avenue to Leatherhead and up the lower hill to the Bookhams and Dirtham Lane. Passing a large crowd of gasping Olympic aspirants, we plunged down Coombe Bottom to Jordans Caravans. Just six were eager for Greensand  bypassing Peaslake on dry but debris strewn lanes. Horseblock Hollow quickly saw us to lunch at the Little Park Hatch; our early arrival (1220) quadrupling the punters.

After the usual gargantuan portions (Jeff dnf), we were ready for the off, not one I would normally relish in early January. Lower Breache Road, Holmbury and The Volunteer were preludes to White Down which all managed at no speed. After a well earned round of cakes at the Vineries GC it was time to wend our separate ways home. On the Tilt I was dumped in the mud by an errant micro cyclist(I was stationary). Through gritted teeth I graciously accepted  his parents' apology! Just under 60 miles door to door.

Posted by Anonymous at 10:58 No comments: 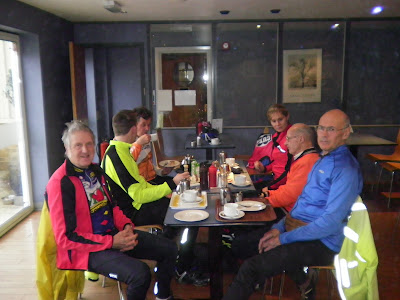 Steve Gordon was out today at Jordans Gomshall and wishes to remind us that the C&M Lunch is being held again in 2012 at the Horton Park Golf & Country Club on Sunday 5th February 12.30 for 1pm. Booking should be made via him £12. in advance for 2 courses. Choice Beef or Chicken or Veg Lasagne with Fruit Crumble or Chocolate Fudge and Tea/Coffee. Bookings please before 22nd Jan to 0208 398 2775 or 07751319621 or steveandann61@btinternet.com. Cheques made payable to S.Gordon & sent to home address. The more the merrier last year we had around 45 bookings so far around 25. There will be a ride beforehand with elevenses at Ashstead Park Garden Centre.
Posted by mike morley at 14:19 No comments:

Continuing the New Year's Day tradition had been an easy decision but Ed's foot meant we needed two leaders. Following more or less the Hogsmill got the ride from Ewell to Malden Manor. Ed then headed for Motspur Park (where his wife lived in their courting days and "where Carters used to be"). After Beverley Brook (no beavers) and Malden Golf Club came Traps Lane, start of the climb to leafy Coombe. Warren Road had its Eisenhower plaque and was handy for Ladderstile Gate. By road or by trail, all reached the Roehampton Gate cafe where the headcount was over 30.

The return began quite unexpectedly! Alan, Irene and Tony set off for home closely trailed by others thinking the ride had started. After a hectic chase I caught up at the Royal Ballet School so allowing the backmarkers to rejoin. Left by Ham Gate took us past the recently closed Latchmere House prison and my old school (no connection). After Norbiton's station and estates we crossed Kingston Road en masse from Elm Road thanks to a considerate motorist. A rash of painters beyond South Lane meant we were now in Malden Manor where once again I use the Paddock Close alley to bypass Barrow Hill. Swiftly descending from Cuddington church we soon reached the Ruxley Lane turn-off. Ed went on ahead so I delayed using Pam's Way; our arrival coinciding with the onset of rain.

Thanks to Ed's baking and Maureen's savouries, most were full though soaked by the time they reached home.

Posted by Anonymous at 08:13 No comments:

More Thanks to Ed OneJan2012 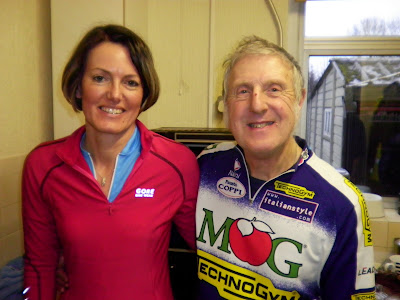 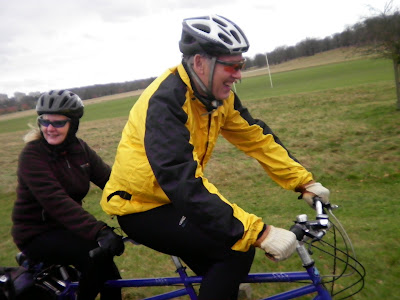 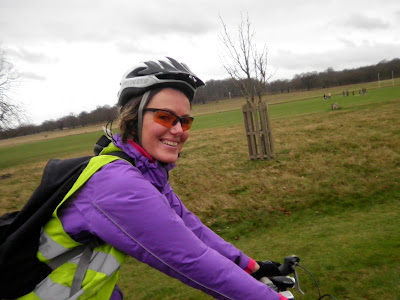 Ed what a wonderful spread of cake and thanks to all who contributed the "Rocky Road" was splendid my ride home was very wet but the day was enjoyable thanks to to all those men and women of like mind - Cyclists!
Good to see Ruth & Rob on Tandem and welcome to Nancy your first experience of Ed's renown cake cooking!
More pics on KPRC Blog. 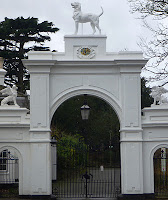 Bourne Hall. Can anyone tell me about that dog? 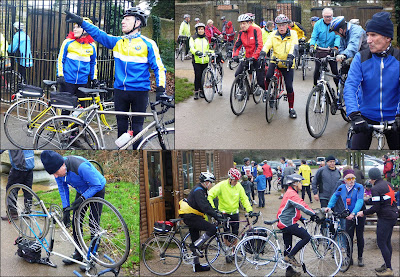 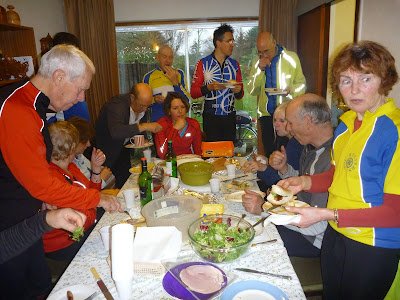 Rounding off the day with high tea at Ed's
Our grateful thanks to Ed for multi-tasking as morning leader and afternoon host
Posted by Jeff at 16:58 No comments: 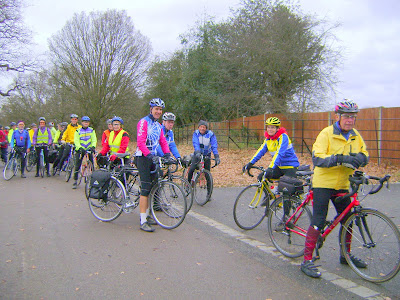 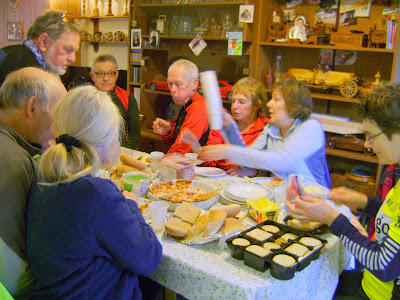 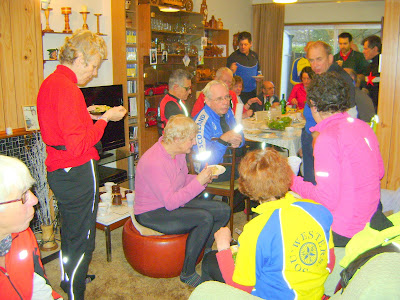 Thanks to Ed for his continued hospitality & Graham for 50% leadership duties.
Happy (Safe Cycling) New Year!!!
Posted by Tartan Socks(long) at 16:22 No comments: