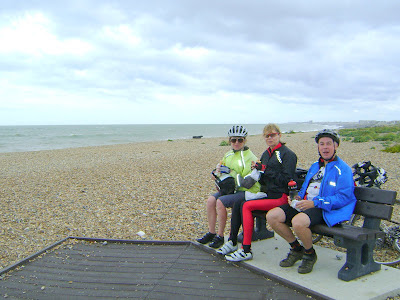 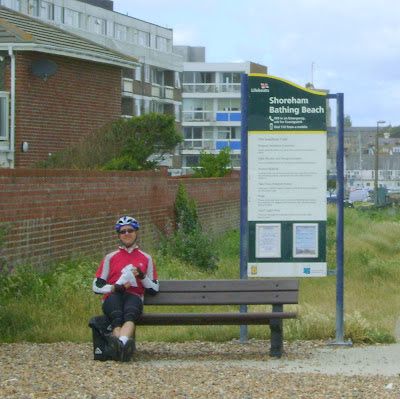 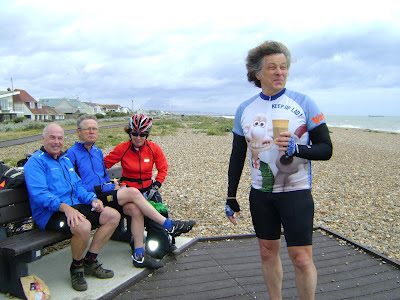 Not a drop of alcohol in sight 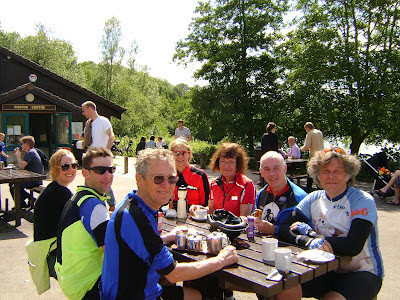 And so our annual trip to the seaside began at a not too early 8.30 but some may of suspected a hard day ahead as I set off like "s**t off a shovel",so much so I dropped poor Stephanie who despite riding to the coast on the previous Wednesday seemed up for another go.
At Givons Grove,Daniel came up along side,a late starter so I couldn't have been that fast........erm.....just saying.
My rendezvous with Pete B at Pixham Lane (south) was a full 12 minutes early so we waited and sure enough he appeared shortly before Graham (coincidence).
With fast legs I set off via Fourwents pond and Capel to Friday Street,Rusper and the newly resurfaced lane (Old Holbrook) that drops down across the A264 into north Horsham and eventually Wetherspoons for breakfast.
Here we were joined by Jenny,Jeff & ........crikey is that Stephanie?
Ridden virtually solo from ECT.
Jenny joined us south but Steph & Jeff turned north.So our route........Sedgewick,Copsale,Maplehurst,Littleworth & Partridge Green.At this point we picked up the B road going through Ashurst to Steyning & Bramber where Steve punctured and was subsequently dropped to be later reunited (by chance) in Shoreham.
As indicated in a previous post,I intended using the Downs Link into the town.This was just about passable but with a couple of miles riding on a stony/bumpy surface.
Lunch was at a convenient café located just a few yards from the beach.
After an hour and bladders emptied we set off home.The highlight was the delightful lane going from Ashurst to Dial Post.
Tea at Southwater as is custom for this kind of trip and a muddy Peddlars Way into Horsham.
A brisk ride from there homeward with computers indicating 15's & 16's.
A cloudy but mild morning with the constant threat of rain but considerably brighter and warmer for the afternoon......low 20's.
Some achieved the magic 100 miles,but for me..........I'm happy to settle for 92 :-)
Posted by Tartan Socks(long) at 20:02 No comments: 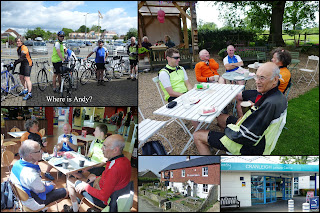 Andy can still smile after his tribulations at the hands of British Rail or whatever it is called these days. Was that just a ploy to avoid the tribulations of Bedham Lane? I shan't forget Fittleworth for a long time!
Posted by Jeff at 02:12 No comments:

Along with about thirty members of the fairly recently formed Dorking Cycling Club, Pete, Ray, Paul and I met at Dorking Sports/Leisure Centre on by far the best day of the week. The DCC departed eastward bound (they tend to do morning rides on Sundays), we four headed south via Coldharbour to elevenses at Cranleigh Sports and Leisure Centre. Here we were soon joined by Graham and Jeff whilst Ray returned home. Continuing south via Knowle Lane and further shady, green, quiet lanes we passed through Tisman's Green, noticed anglers near Drungewick Aqueduct on our route to Wisborough Green. To avoid the wrath of Jeff I chose not to use a roughish track I'd found on recce but instead to tackle the Heights of Fittleworth. It was now a fairly undemanding run to The Sportsman at Amberley via Coldwaltham and Greatham.

The lunch (taken outside) was very adequate and we spent a little time unsuccessfully studying Jeff's vintage OS for nearby airfields from where a light aircraft towing a glider might have come. After lunch we retraced our tyremarks briefly, to be joined by Andy who'd spent much of the morning trying to catch up with us by trains. The return route was less demanding than the morning's, plus we had a little assistance from the wind. After a short stretch of the A283 we turned off to Nutbourne and West Chiltington then via Broadford Bridge, Barns Green, Broadbridge Heath, Warnham and Rusper to fours plus (not plus fours) at Tanhouse Farm - and very welcome they were.

After refreshments I only had a short distance to go home to Dorking - I recorded just under seventy miles - others will have done more.

...elevenses will be at Cranleigh Sports/Leisure Centre located at the end of Village Way (south off the B2128, see Surrey Cycle Guide no. 6) and NOT at Cranleigh Notcutts. Hope to see you at Dorking at 0900. 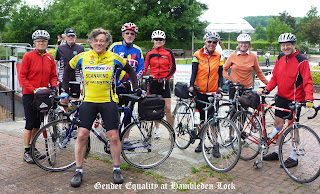 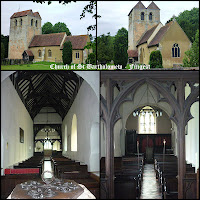 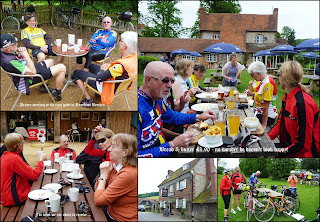 Many thanks to Irene and her Grey Eminence for a most enjoyable ride. The rain, however, did catch the hindmost before they reached home! I didn't go back to try and find my new Cateye computer which jumped ship in the Ashford area.

How lucky we were. After the terrible weather forecasts all week we got away with a beautiful day's ride.

Graham met five plucky souls at Kingston Bridge and led them past sixteen muzzled greyhounds in Stanwell and onto Colnbrook where Pam and I were waiting. When we got to Burnham Beeches, Bob, Tony and Dave were already there. After tea and bacon butties nine continued to Fingest in the beautiful Chilterns via Bourne End, Cookham and Marlow. After lunch in The Chequers we returned to Hambledon Mill (lovely setting) for afternoon tea and cakes at Savill Gardens.

I think a good day was had by all; some had never been to this part of the country, but it did make it a very long day (85 miles from Kingston) for anyone living in Epsom and Tadworth areas. Just to say "Tartan socks was greatly missed!!" Thanks to one and all for making it a great day. Don’t know how many calories I used up or how many hills I climbed but it doesn’t matter so long as I didn’t blow. I live to fight another day.
Posted by Anonymous at 13:37 No comments: 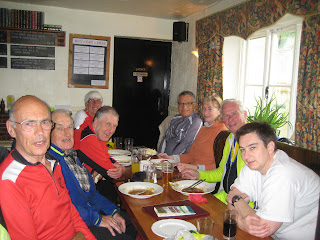 Happy faces due to at least two of the following:

(1) Main courses two for price of one.

(3) John doesn't realise he has a puncture.

(4) The afternoon rain hasn't yet started.
Posted by Terry at 18:10 No comments:

On a depressing day of non-stop drizzle and rain I arrived at Kingston Bridge fully expecting to be able to turn round and go home again because no-one else would be so stupid as to voluntarily cycle all day in such awful weather. But Steph, Ed and Paul were there and raring to go; and at elevenses at Fairoaks we were joined by four additional nutters riders, namely Pam, Jeff, Terry and Vic.
Avoiding Central Chobham (closed for a Jubilee parade), we proceeded through Windlesham and crossed the A30. We took Coronation Road to South Ascot and on to Ascot High Street. Then through back roads and a short path to emerge into the car park of North Ascot Library. Ignoring Jeff’s complaints, we cycled half mile or so off-road (Sandy Lane) to Winkfield Row. From here it was only about three miles through delightful unspoilt countryside to lunch at the Leathern Bottle at Jealott’s Hill. We were joined at lunch by Lisa who had come by car (eminently sensible given the weather conditions) from nearby Maidenhead.
At lunch most of us found a partner to share the bargain “two lunches for the price of one” offer and the staff went out of their way to be friendly and helpful. We emerged just after 2 pm to find that the drizzle had been replaced by heavy rain.
It is now becoming an established tradition that I have a puncture each time I lead a ride; and today was no exception. Just as I was about to lead the party out of the pub car-park, Lisa pointed out that I had a flat back tyre so we were delayed at least 15 minutes for a change of inner tube in the pouring rain. The cause of the puncture, a sharp stone sticking into and out of the tyre, was immediately obvious. Jeff’s comment: “What else do you expect if you take us off-road?”
The first half of the return journey should have been straightforward being straight on all the way along the A330 and B3034 Lovell Lane to Sunninghill Road. But, looking at the map, I now realise that at Winkfield I must have mistakenly taken a left fork along the B3022 towards Windsor, and this added an extra mile or two to our journey. However, we eventually regained the Sunninghill Road and went through Sunninghill and Wentworth to Virginia Water and Chertsey. At Shepperton we were all so wet that we unanimously agreed to skip tea and make for home.
John Gould
Posted by Lisa at 16:29 No comments: