Subject to approval at the next AGM, there will be changes to subscription rates. Details will be printed in the next mag, etc,  etc. The major changes for members of this group are :
1) No concessionary rate for over 65's (£48 pa from November onward) ;
2) New life membership will be based on age and length of membership.
UPDATE 1
But I've found web pages with differing rates:
cyclinguk.org/life
the discount is £12 per year up to the age of 71.
Tucked away among the FAQs accessible via
www.cyclinguk.org/article/proposed-changes-cycling-uk-membership-faq#q10
the discount is £6 per year up to the age of 71.
which is a difference of £426! For me, the cost might be under £100. I can only assume that the first discount is only available up to the end of September, and the second thereafter. I'll contact HQ for clarification.
UPDATE 2
I've now spoken with Membership. The age discount is £12 pa until 71. They were not aware that a discrepancy existed on the website.
You can apply at any time.
UPDATE 3
One lucky member who lives near the Wash is now a life membership : cost £47
Posted by RaasayWarden at 07:31 1 comment:

We've not had a train assisted ride for around five years. So I surveyed one whilst recently visiting my sister. Which is what I'll do again if nobody turns up!
The start will be Winchfield station with an hourly service (xx30 from Surbiton, journey time 45mins).  The 0830 would be ideal but at least one rider wants to ride from home! The station has no facilities but within ten miles there is least one coffee shop and two garden centres. Conkers GC (SU677523) is the furthest away but on the planned route.
Optional attractions include King John's Castle (c. 1210) at Odiham, Greywell tunnel (Europe's largest bat colony) and Calleva amphitheatre (c. 70AD). For ford fans there's one near Calleva.
I'm thinking picnic at Silchester rec (next to pub); there are only three more on route. We'll finish in Hook where there's a small cafe (Hartletts closes 1500) and/or toilets in Tesco next to station.
The total length is just over 30 miles. The high point is 360 feet but it doesn't feel flat!
Posted by RaasayWarden at 14:24 No comments:

Sunday's ride will be circular starting and ending in Lammas Park Staines. My original lunchstop was Burnham Beeches cafe but seven days ago it had limited seating and no toilets. It's still an option and for me the longest ride of the year.
But my revised plan is a democratic vote at Black Park (all services, after 12 miles) for a return via either Burnham Beeches (say 20 miles) or Langley Park (10 miles).
Plenty of the (not too) bumpy stuff  - I've left out plenty more!
Posted by RaasayWarden at 13:31 No comments: 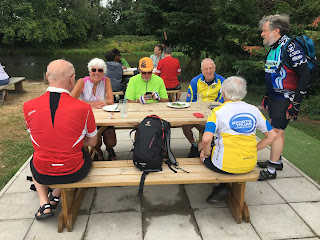 The switch of elevenses venue to Amici, Leatherhead didn't seem to deter too many!     Bob, Keith, Mike and Helen Tovey arrived, as well as the core group of Graham, Pam, Ray W, Ed, Maureen, Tony and I who continued to lunch.

At first sight there were some similarities to our ride to Woking two weeks before, but care was taken to use a completely different route across Bookham Common, before a slightly different route across Wisley Airfield, which led us in turn to Muddy Lane, recently declared a bridleway (spot the difference - public footpath signs and anti-cycle barriers still firmly in place)!  After that we couldn't resist another bash at the newly-upgraded Brooklands to Weybridge cycle route, before finishing up by the canal at The Pelican, Addlestone.   There was a bit of wait to order by the entrance, but nothing too serious, and plenty of space outside for social distancing.

After lunch some headed for tea at Shepperton Lock, while others made for the comfort of their homes or the harsh regime of their allotments!

Many thanks to all for your company, to Graham for help with the route, and Ray for back-marking.
Posted by David W at 17:24 No comments:

Elevenses will now be at Amici, Leatherhead (changed from Tattenham Corner).   Lunch stop to be decided.   Apologies for the short notice.   Bob has kindly investigated the other possibilities at Tattenham Corner and The Silver Spoon cafe may well appear in a future programme! 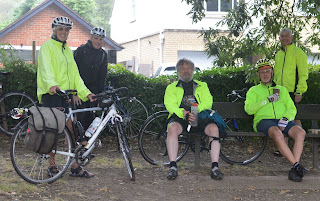 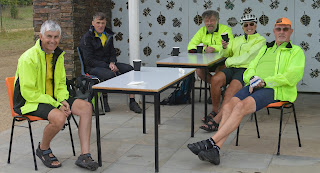 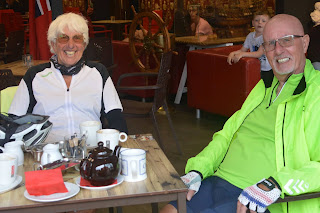 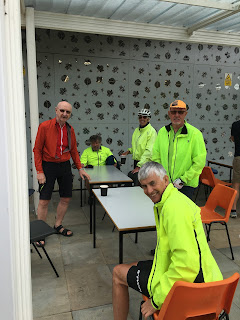 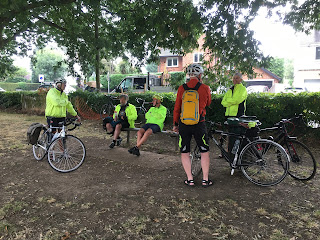 (Credits and thanks to Ray Wren for the first three).
Posted by David W at 07:28 No comments:

Dave was first to arrive, I was next. At intervals four more (Pam, Ray, Simon, and Tony) appeared in a variable drizzle. West Byfleet Rec. was not ideal having but one bench with facilities at best within walking distance. Eventually the tree cover proved inadequate and the decision was home. I suggested a gentle off-road back to Weybridge.
A right along Leisure Lane brought us into Dartnell Park.We crossed the canal and headed north to the break in Brooklands banking close to M&S. After (the model) Concorde Mercedes Benz  beckoned to reveal a new (under seven days old) ten foot wide strip of tarmac which provides a steady but relatively easy climb from Seven Arches bridge past the sewage works. Gone forever the mud though this can still be sampled if and when New Haw calls! From the station the path descends but ends at Brooklands Lane (or in the town centre when complete).
After prolonged refreshments at Walton Bridge, four decided Nauticalia should also be visited whilst Dave and I opted for home. Naturally there was little rain after Byfleet and only 30 miles door to door.

Posted by RaasayWarden at 06:53 No comments:

The weather forecast for tomorrow morning is uncertain, so elevenses at West Byfleet Rec, although the preferred choice, will be subject to a Stewards' Inspection!   If it is raining and there is some shelter somewhere nearby, then we'll keep it as West Byfleet if we can, but, if it is raining steadily and there is no shelter, then the alternative plan will be Bourne Valley Garden Centre.   I'll put something on Whats App in the morning when things are clearer!
Posted by David W at 14:25 No comments:

Members suggested a change of elevenses venue to Amici Cafe, Leatherhead.   This proved an excellent choice and is highly recommended.    The proprietor is very helpful, and toilets and water were offered.   Graham, Mike M, Pam, Tony Hopkins, Maureen, Lilian, Ray, Ed, Steve Duffin and Simon duly assembled, and it was also very nice to see Bob and Keith again, after what seem like very long absences. 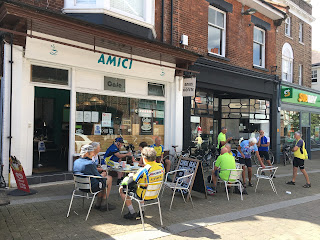 Ray, Ed, Steve, Graham, Pam, Lilian and I formed two discrete groups and proceeded east to west over Bookham Common to Effingham Junction, then across Wisley Airfield to Ripley and Old Woking, from where it was but a short ride along a mixture of narrow lanes and busier roads to our impromptu lunch stop at Woking Park.

The park was busy but there was plenty of space and we were able to commandeer the bandstand! 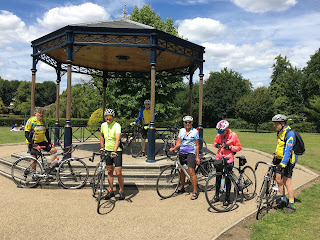 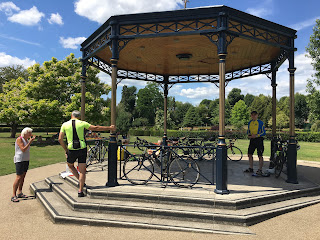 After a relaxing lunch and comfort stop we skirted Woking town centre by quiet back roads and headed through Sheerwater and New Haw for tea at Addlestone.

Many thanks to all.

By popular demand, we will now meet for elevenses at Amici cafe, Leatherhead, instead of Ashtead.  Outdoor seating is available, as well as The Swan Centre toilets nearby.   Lunch stop to be decided.

Pleas pass this information on to anyone not having web access.
Posted by David W at 19:27 No comments:

5 July - a Windy Walton to Windsor

I planned this ride in February, in a different world, but it was cancelled due to heavy rain and lack of interest.   Plan B was to go to the recently opened Notcutts garden centre for proper elevenses, but it looked like a Covid-secure breakfast might take us until about noon, so we started at the excellent Wilde Brunch in Walton instead.

There were ten at Walton: Terry, Dave Vine and Tony opted not to ride further, leaving 6 + 1 setting off to Windsor.  David Ward as back marker for the group of six, and Graham as long stop, occasionally in sight but mostly stalking us at a great distance.   A wild westerly wind was worrisome, but a lot of the time we seemed to be sheltered from it.   The route was pretty straightforward: over Walton Bridge, Shepperton, Chertsey, Trumps Green and Virginia Water, although we avoided the lakeside path and stuck to the road round the edge.

Somewhere round Cheapside, David punctured and handed over back-marking duties to Graham while he fixed the puncture and caught us up later.   Now we had the wind behind us and this powered us into Windsor Great Park, down into Windsor itself and Alexandra Park, where there was a nicely socially distanced bench in the sunshine.   There was even talk of ice creams but in the end the toilets had more of an attraction for us.   The town itself was heaving with people but the park was surprisingly quiet.

The route home: even simpler: wind assisted past Datchet, Old Windsor, Runnymede, Egham to Staines & Laleham, where we rode beside the river back to Chertsey Bridge and then on to Nauticalia in Shepperton.  Nauticalia was very well organised with socially distanced tables and hand sanitizer everywhere you looked.  It was a real treat to be able to sit in the sunshine and chat over a proper cup of tea with good company.   Thank you all, and especially to David W and Graham for back marking.
Posted by Simon L at 20:39 No comments:

Sunday's ride will now start at Walton Bridge Cafe.  I don't think it will be practical for a group of us to meet at the original location, Notcutts Laleham, since they only open at 10.30 and with limited people allowed inside and queuing to get in, some could still be queuing at 11.00.
Picnic lunch will be at The Alexandra Gardens, Windsor, returning via Runnymede to tea at Nauticalia, Shepperton.  32 miles: a fairly flat route avoiding Tite/Prune/Crimp hills etc.  You can see the route here.
Posted by Simon L at 10:18 No comments: