They sure don't make them like they used to.  What a glorious snapshot of true craftsmanship. Wonderful.

The old Raleigh factory (one of the oldest bicycle companies in the world) in Nottingham no longer exists. It was demolished a few year's ago when in our wonderfully globalised world, it was seen to be cheaper to employ Chinese and Vietnamese at pittance wages.
The brownfield site was recently 'redeveloped' as student housing and the expansion of the University of Nottingham's Economics and Business Management Department.
Fitting that an industry dedicated to making a tangible and useful product such as the bicycle is replaced by an institution teaching the next generation how to profit from the creating on non-tangible and potentially destructive financial products and 'services'.
Posted by Tartan Socks(long) at 21:53 No comments:


The lure of the C&M AGM brought a trio of committee men pondside at Walton-on-the-Hill to join me for a preliminary spin to Redhill Aerodrome (Ray, Steve, John G). For a change we forsook the tarmac for something softer to the tread. The path across Walton Heath to Mogador was not too boggy, though the mud did seem to fly everywhere, but at least did not create an unwelcome drag brake. 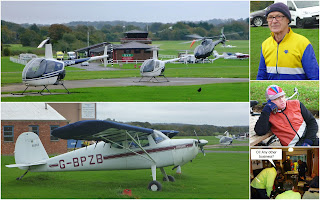 After Mogador, a brief stretch of road along Babylon Lane took us to a farm track, Crossways Lane. This proved rather steep, stony and deeply eroded for comfort, but we made it under the M25 to Gatton Bottom, then up through the grounds of the Royal Alexandra and Albert School in Gatton Park. A quick descent of Rocky Lane took us to the outskirts of Merstham and up Cormongers Lane to the A25, then down to the Aerodrome. 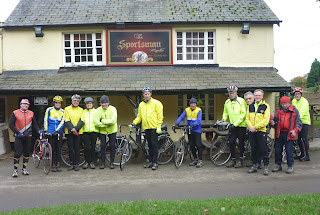 We had ample time for chat and cha as numbers swelled. Lunch was to be at the Sportsman in Mogador. Although quite close, an early arrival was advised as space is limited and fills quickly after 12.30pm. We retraced the morning's route as far as Gatton Bottom, but chose to ride up to the A217, rather than walk and carry our bikes up Crossways Lane. A quick zig-zag down Margery Lane and Buckland Road (more a track than a road) brought us to Mogador Road. So nearly there, but Daniel's front wheel found the edge of the road hidden by leaves, and unsaddled him. Fortunately man and beast were unharmed and we safely reached the Sportsman.

Though only 12.30pm there were scarcely enough seats for us. Good beer (Otter) and food, beside a crackling fire, prepared us for our next leg. We crossed Walton Heath Golf Course and a bit more mud, before rediscovering tarmac all the way through Walton, Tadworth and Epsom Downs. At this point, Ed scented home and set a spanking pace to lead us to our destination. With our bikes stabled in and around Ed's garage, we were treated to tea and cake, before the serious business of the day began: the Annual General Meeting of the CTC Cheam and Morden Member Group. But that is another story. 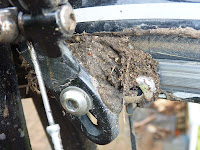 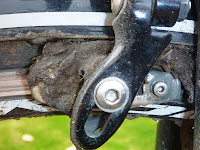 P.S. On inspecting the bike today, maybe the mud was worse than I suggested. The bike was caked in dry mud and one spoke was broken. I blame the leader.


At Kingston Bridge there were two new(ish) faces, Barry and Nancy. Hurst Park doesn't featured on many rides and we reviewed ongoing work whilst passing beneath Walton's bridges on a new path. In Weybridge John punctured; in Addlestone Dave nobly turned back to offer assistance. 11s was not far away so the rest continued to Bourne Valley GC (new venue) where gradually numbers reached double figures.

Refreshed we joined the Basingstoke at Woodham Lock but to my surprise turned off at Sheerwater where a busy B382 got us to Old Windsor. Following B380 to its conclusion left us just short of the Royal Oak in Pirbright. Despite being early, we had to sit where we could; some settling for the "Two for a tenner" offer.

After lunch Bisley camp and West End were visited before the turn for home. Lovelands Lane's ford was far too deep after recent rain. Soon Red Lion and Stonehill Roads hoved into view and after a final dash along Green Lane, we went our separate ways in Addlestone. Home just after four and 50 mild, dull and occasionally drizzly miles.
Posted by Anonymous at 08:33 1 comment:

I'm reliably informed that the Nutty Lane garden centre is deceased (more or less) so it's Squires Upper Halliford for 11s. NB This doesn't open until 1030 hrs (neither did Nutty Lane) so expect a detour or two  from Kingston. Or maybe you will opt for a lie-in.

On the left is SYHA Carbisdale Castle in foggy/freezing conditions. Still under wraps after two years and a  2013 re-opening seems....

On the right is Ben More Assynt from the Duchally power station road. "Is that snow?" you ask, "Yes". 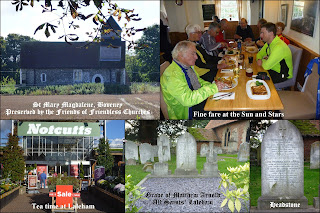 What a great day it was today.[a] Beautiful blue skies and wall to wall sunshine.[b] It was “see food and eat it day” for our disappearing Jeff. 13 turned up at 11s, 9 left the Magna Carta tea rooms leaving 4 to return home: Stef, Andy, Dave and Don. We continued to Old Windsor, Dorney, into the lakes where we turned right onto route 4 [the lakes closed to the public at the moment], up & over the river to Bray & Holyport to “The Sun and Stars”, where the publican made us very welcome giving Bob seconds for coffee while Jeff tucked into Chicken and bacon home made pie. We then made our way to Fifield, Drift Road, Willow Walk where Terry left us. We continued to Chertsey Bridge and Paul carried straight on and somewhere here John G must have escaped, as when we arrived at Notcutts he was gone. Margaret & Bill were there waiting for us. A very nice day. Thank you one and all.
Irene
Posted by Jeff at 23:54 No comments: 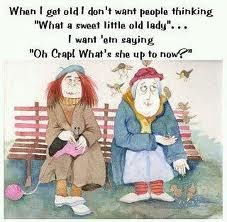 In anticipation of this coming Sunday's C&M ride, the Belles of St Trinians have been putting all the pubs of Holyport through their paces, to decide which one to choose for lunch this Sunday, 14 October. Their decision seems to be the Sun and Stars. Details of the menu can be found on this link to the pub's website. We must thank Irene and Pam for their diligence on our behalf. They seem to have been able to weave their way home in safety, without being detained as drunk and disorderly in charge of a two-wheeled vehicle.
Jeff
Posted by Jeff at 23:36 No comments:

The Queen's Head at Barns Green

A chilly morning but beautiful weather after the rain of the last week. Nevertheless the turnout was limited with only eight at elevenses, half of whom went home leaving a select group of Jeff, Terry, Ed and myself continuing to lunch. We headed south through Peaslake to Ewhurst and then into Somersbury Lane en route to Rudgwick. Here a northbound cyclist taking part in an event had come to grief and was being attended by the marshals. We later passed two ambulances heading north through Rudgwick. The Downs Link was damp but rideable avoiding the A281 to Slinfold where we rejoined the tarmac for the final stretch through Itchingfield to Barns Green. Emerging from Itchingfield we met Daniel who had made a late dash from Epsom to join us for lunch in the Queens Head. Refreshed, we continued south for a mile returning via Bashurst Hill and then through Warnham and Friday Street to Capel where most of us attacked the cakes. Jeff, unfortunately was on a fasting day so for the second time in two hours had summon the willpower to abstain. From here it was the usual route home through Newdigate and Pixham. Fifty seven miles for me.
Posted by Brian at 10:16 No comments: 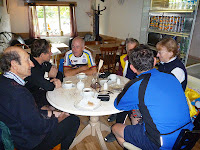 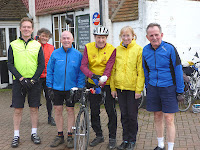 Three photos to accompany Stephanie's report. Left: Gathering at Godstone Green Tea Rooms. Centre: After lunch outside the Crown at Turner's Hill (Ian was there). Right: The tea stop that got away. We didn't make it to Priory Farm at Nutfield. I went there out of curiosity as few seem to have been there.
Jeff

Lovely day, set off from Banstead, down and up again, past Fannies, through Merstham, left at Hawthorne school bridleway, then left and right and on to Betchworth, down the main road to the tea shop at Godstone.  Joined here by two fat boys (Pete & Pete), Richard and Jeff and Bob and Ian!   Minus Bob we then headed south up Tilburstow Hill, continued South and particularly enjoyed Chithurst Lane which joined up with Dowlands Lane at the end, then down the side of the Hedgehog pub, over Crawley Down and to the Crown for lunch where we were briefly joined by Graham.  Lovely return to Fannies for T.
Thank you Ed.
Posted by Steph at 20:06 No comments: