I think I'm catching the English disease as this long cold lonely winter reappeared in the form of single digit temperatures, strengthening northerlies and overcast skies. Definitely it was no day for distant Dunsfold. Bob and I arrived at Elm Nursery around ten, Alan, David, Ed, Lilian, Pam, Terry, Tony, Vic followed if but slowly. I'd disinterred my winter gear; others had chosen less wisely and "frozen" featured heavily in conversations.

To avoid embarrassment, I'll gloss over our late departure around 1130. Alan headed home. Guildford was crowded with cars and shoppers but we were soon on the cycle path heading South before turning down traffic-less East Shalford Lane. 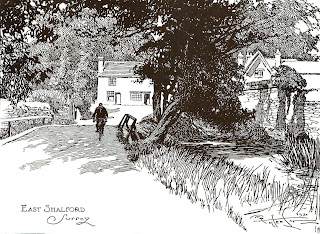 Backmarkers had to scurry across the crossing to avoid a close encounter with a speeding eastbound train. Wonersh came next then the Downslink. Fearful of mud we turn right where NCN22 turns left. The A281 features high in my list of least loved roads but being Sunday the constant traffic was devoid of commercial vehicles. One mile ahead starts my favourite set of Surrey lanes (Brookwell Lane, Gate and  Thorncombe Streets, and Snowdenham Lane) - five and half miles and just two vehicles! One was a massive horsebox but luckily(?) Pam chose to puncture minutes before its arrival.

This gave Ed yet other chance to display his powerful thumbs whilst others admired a horse in an nearby field (not a patch on Falkirk's Kelpies). Now heading north the headwind was numbing. A second dose of the Downslink led us to the A281 and a final scamper along the cycle path brought a reunion with Bob in a very crowded Wetherspoons.

There's little reason to describe the seven miles to Pinnocks. On the cobbles Terry's dexterity  with Allen keys cured Pam's sinking seatpost syndrome. Tony claimed the Ripley prime but were we racing?

Really nice ride from our leader Graham, one puncture.


Ed's master class in puncture repair while the rest looked on. The puncture fairy picked Pam today.
Posted by Tony at 20:13 No comments:

St John's Church, North Holmwood will serve teas weekly between 1500 and 1700 starting on 17th June, the last one on 9th September. They would like to know we're coming a day or two in advance.

I originally planned to lead this ride on December 10th, when I arrived in the snow at the Old Moat Garden Centre to hear a brass band playing Christmas carols.   Today couldn't have been more different, with perfect cycling weather: sun with a gentle cooling breeze.   A good turn-out at elevenses saw Alan and Bob plus Don and Lena joining us just for elevenses, while Jeff, Graham, Ed, Lilian, Theresa, Christina, Terry, Mike M and David Ward set out with me on the ride, skirting Epsom and then heading up Chalk Lane, fragrant after the overnight rain, to the racecourse, where we did a few furlongs across the course.   Mike left us there to deal with some car-related problems, and nearly took David W with him, but we all regrouped to find our way to Banstead, down and up via Chipstead Bottom and along the top (is it called Chipstead top?) towards Mogador. 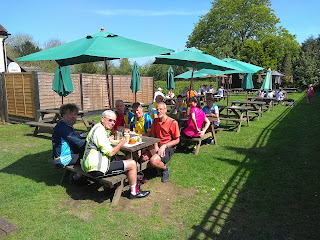 Once we arrived at The Sportsman I tried to tempt people to join me in the short ride to the viewpoint at Colley's Hill but several were more tempted by the pub itself.   Christina was initally unimpressed by the view but then Lilian found a better viewpoint which received grudging approval from Christina.    Back at the pub Keith joined us after making his own way from home, so we were again ten for a leisurely lunch taken outside in the garden.

After lunch, things went downhill in every sense.   Keith, Jeff, Graham and David made their own way home: we sampled the ups and downs of Mugswell en route to Walton on the Hill, where Christina left us; Lilian left soon after, so our reduced group decided to stop at Leatherhead rather than risk losing more riders before the advertised stop at Stoke d'Abernon.    Thank you to David Ward for back marking in the morning (back marker not necessary in the afternoon as I can count up to five!).   A lovely day out - looking forward to many more days like it this year.

UPPER HALLIFORD - TAPLOW - EGHAM
I was early at elevenses but several others were there well before me!  Bob, Bill, Tony, Graham and Dave already seated.  Alan, Simon, Maureen and Ed were parking their bikes as I arrived!  Terry was next, then Vic, followed by Mick Furnival-Adams who had come all the way from Cambridgeshire to join us - well done, it was great to see you Mick.

Bob, Bill and Maureen didn't join the ride and Alan peeled off at Horton.  We started off by going over the 'bumps' at Charlton, on through Laleham, to Staines, avoiding the bridge by taking the river route to Wraysbury.  After Horton it was Datchet to Windsor, then Eton Wick via Eton Bridge and the bridle path.  After Dorney we crossed the A4, taking Station Approach, up the hill and turned into the High Street, reaching the pub, Oak and Saw at 1pm !!

A couple of us parked our bikes in the garden where I saw David with wheel out to repair a puncture?!  Once done David left for home whilst the rest of us enjoyed our lunches.  Soup was very good and most of the others enjoyed a starter of Cajun Chicken and salad.  It was only after I had made a reservation that I was offered a Sunday menu to look at which did not include sandwiches - but nobody seemed to mind. 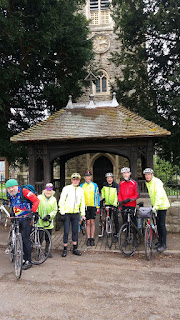 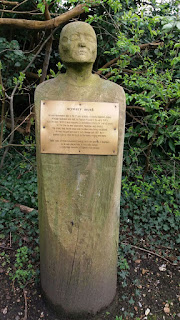 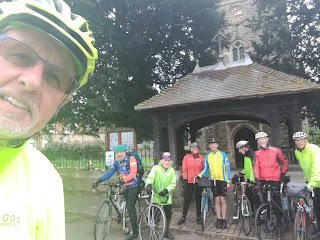 Photos taken and we were on our way not much after two.  We all fancied tea at Walton Lock but that plan was scuppered because of 'rain later'!

We returned via the Jubilee river to Dorney, then a ride along the Thames to Windsor, leaving the river to take route four into Windsor Great Park.  Graham peeled off after Dorney and Tony left us at Windsor.  Each had reason to get home asap.

It had already started raining as we exited the Park at Bishopsgate where we stopped to don rain jackets.   It was here we decided to have tea at the Golden Café in Egham, arriving 3.55 - turned out it closed at 4...but we still had our coffee and cake!  Thanks to the congenial staff.
From here, (still raining), Vic and Terry, went in one direction, Mick followed Ed, Simon and myself into Staines where he continued to Shepperton and we three to the station - where I left Ed and Simon.

Thanks to all for joining me, and being patient with me when I missed a couple of turns!!  Thank you Simon for back marking and Tony for his photo. 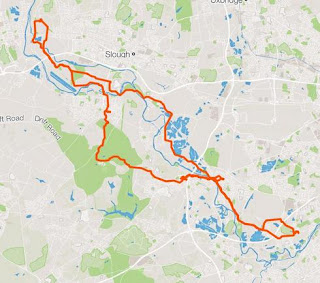 The annual joint ride with South Bucks CTC will be hosted by us this Year.

Please make sure this date is in your diary and that we have a good turnout to support this ride.

Below is an extract from South Bucks CTC Beech Leaf magazine.

The SW London group have offered to lead a joint ride with us. We will meet at
Sainsbury’s Cobham cafe at about 10.15, aiming to set off by 11.00.

There will be two rides on offer, shorter and longer, both going to Ripley village hall,
which they have booked for our lunch venue. We then return via a slightly shorter
route possibly via Pains Hill park, which has a cafe. The terrain is undulating, but no
big hills.

There is a time restriction on the Sainsbury’s car park, but there seems to be free
parking at Pains Hill Park, which is only about half a mile away.
Everyone is welcome, but please let either me (Robert) or John Cappell know if you
intend to come, as they would like an idea of numbers by about the end of April.
If you want to go, but do not have transport, please contact either John or myself,
as we may be able to offer/arrange a lift.

I see this as a chance to explore an area we don’t go to very often
because the ride there is not particularly pleasant.)

This was a day mostly of drizzle and rain with plenty of standing water by mid-afternoon.

Ahead of me at Stoke D'Abernon were Bob, Ed and Vic and some time later Alan put in an appearance. After a lengthy stop, Vic's route took us (without Bob) back through Cobham, past Notre Dame school and up Seven Hills road. By the time we reached the A317 roundabout we were down to three as Alan "disappeared". A right before  the station saw us descend into Weybridge and along the side of the Navigation.

After a leisurely lunch in the Golden Cafe Addlestone and with no prospect of improvement, we headed home. Just 32 miles for me and further proof there's no such thing as cycling waterproofs.
Posted by RaasayWarden at 17:02 No comments:

Due to staff shortages, holidays etc this Sundays ride from Stoke D'Abernon will be led by Vic and the lunch destination has changed to Wetherspoons Camberley.

Many thanks to Vic for standing in at late notice. 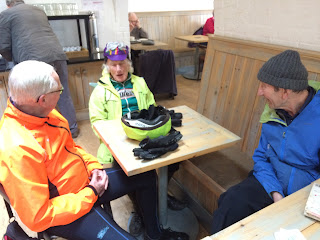 With many C & M regulars away for Easter it was up to Bob, Jeff, Vic and I to fly the flag at elevenses at Polesden Lacey.   Jeff had a recalcitrant fence post to do battle with at home, and Bob was undecided, so it was left to Vic and I to continue to lunch at the Saddlers Arms, studiously avoiding any unsurfaced tracks!   Even for Easter Sunday it was a cold, dank and grey morning, so we made good time to the pub, where the welcome was friendly as usual, and lingered over lunch rather than the ride.  Although it did brighten slightly after lunch there was still no temptation to dawdle and it was straight home with no tea stop.  About 42 miles on the clock for me.   Thanks to all for your company.