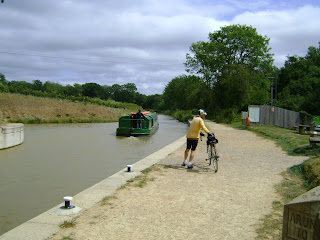 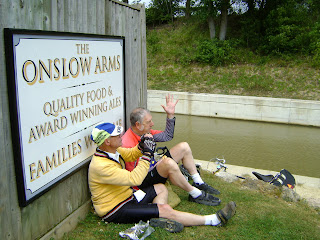 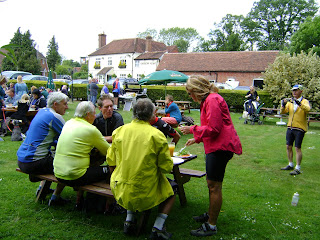 Six of us met at Ashtead Pond and rather more joined us for elevenses. Of those, ten stayed out for the ride ( Andy, Jeff, Terry, Ed, Frank and Francoise, Ray, Pete ( x2) and myself. Although there was rather more sun than forecast it was the blustery wind that was the defining feature of the ride to lunch. We set off along the A246, Blake’s Lane and up Staple Lane, and then via Shere and Little London to Farley Green. Here we took the right fork across the heath and then Stroud Lane to join the road to Cranleigh. The flatter and wider roads through Alfold to Loxwood were hard work against the wind and we all looked forward to a wind assisted return. The Onslow Arms was typically busy for a holiday weekend and there was quite a queue at the bar. My roast arrived fairly quickly but the barbeque was a different story. The queue was short but the wait was long as Terry and Francoise found by experience. Leaving the pub we followed the canal towpath to Drungewick Lane and then the direct route through Bucks Green and Ellens Green to Weare Street and Capel. When we arrived it was rather grey and we sat in the pews for tea. For me it was 54 miles for the day but probably close to 70 from N Cheam.

Posted by Tartan Socks(long) at 21:47 No comments: 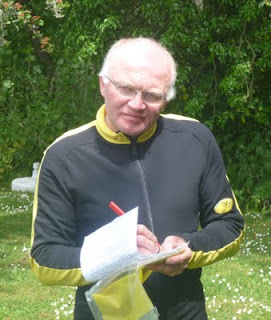 I've got your number

Route planned, food and drink ready, 11's venue identified, alarm set, what could go wrong? However well prepared you think you may be, something will get you! On this occasion, bike out and ready to go, put a few pounds of pressure in the tyres - bad idea. Presta valve broke off in track pump. Replace wheel. We're off. Fine until Esher roundabout going under A3, cranks lock and can't pedal. Halt and take refuge. What's wrong? No idea - cranks simply wont turn. Then I see: a link has snapped. Find chain tool, shorten chain, shorten ride, limp back home. I knew I should have replaced that chain! Not quite well enough prepared.

Grateful thanks to Lisa for letting me know that that a strong headwind had led to a change of lunch venue from Hurley to White Waltham. Sorry I wasn't able to share it!
Jeff
Posted by Jeff at 14:21 1 comment:

I am informed by Irene it is the Windsor Farm Shop as used in Feb
Posted by Pete at 07:39 No comments:

The CTC Conversion to Charity - Outcome of Vote

The CTC - born 1878 - died 2011
Dear All,
At the CTC AGM last Saturday, the outcome of the vote on the changes to the CTC Memorandum and Articles of Association was a large majority in favour of the motion. This means that the CTC will be proceeding with arrangements to convert the CTC into a full charity.

Although the voting took place last Saturday at the AGM the CTC has not released the full voting figures. They have said only that over 11,000 members voted, of whom 88.3% supported conversion.

Members across the country will now have to decide what their personal response is to this significant change to the CTC as a membership organisation for cyclists and what choices they have. I'm sure that we shall be considering those options. 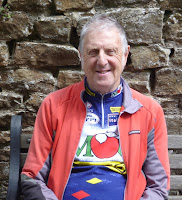 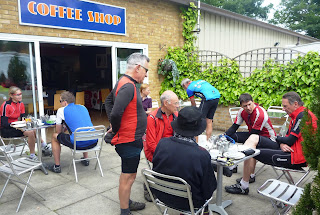 Elevenses was at Jordans - Gomshalll not Chalfont - where on and off road came together. Then it was into the woods for the knobblies and onto the A25 for the skinnies. Ed led the tarmaceers via Albury and Blackheath to Bramley, then up (yes, definitely up) some narrow, leafy lanes across Munstead Heath, then down to lunch at the Jack Phillips, Godalming.
The return was along Meadrow past the ghost of the former CTC HQ, before heading for Chilworth. At Blacksmith Lane, I decided to sacrifice the climb to Newland's Corner as well as a few calories, and bade farewell to the group, to take the A25 for Dorking and home, my shorter route just breaking the 50 mile barrier.

Thanks to Ed for an enjoyable ride on a distinctly cool May day. 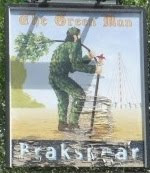 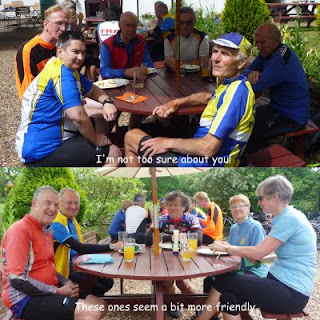 Look what a day out with the Cheam & Morden can do! 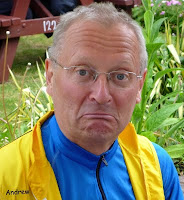 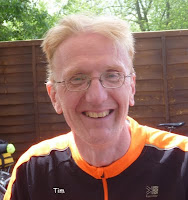 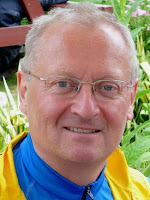 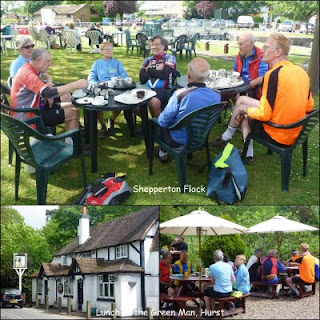 As well as leading from Kingston Bridge, it seems my role included the write-up!

With new rider Tim in tow, we vied with a continuous stream of joggers as far as Hampton Court. The lower road through Sunbury Shepperton and Chertsey was much less crowded; St Anne's Hill got us to Virginia Water and the Great Park was entered beside the Wheatsheaf. Slaloming round the numerous  pedestrians we were soon at Savill Gardens when eventually a dozen were grazing. Surprisingly all  followed the leader who set off at a canter astride the Roberts. Within the park we were stopped twice: (1) when asked to ride in sixes (2) yet another race(horsey); as we left, a Lancaster trundled overhead heading towards Heathrow; VE-Day it was.

Regulars will know the route: the Peanut, Maiden's Green, Nuptown, Moss End, Binfield FC and so the Green Man at Hurst was reached from the southeast. An alfreso lunch was followed by Shurlock Row, Warfield Church, North Ascot and back into the park where we had left it. After the quick descent of Tite Hill came Thorpe bypass and Chertsey and a final stop beside Shepperton Lock. For much of the day blustery and cloudy but warm when the sun broke through; and no rain. Around 70 miles.
Posted by Anonymous at 20:19 2 comments: 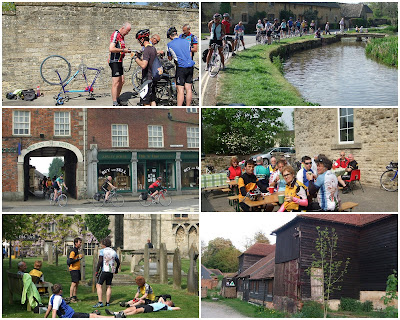 May 22nd I can't find a cafe in the Tea List on line at Old Windsor so what cafe is to be used as i wish to meet at11s
From PeteM
Posted by Pete at 15:09 1 comment: 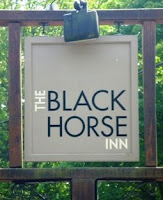 Last Sunday it was the White Horse; this Sunday the Black Horse. Determined not to miss the departure from elevenses, I arrived half an hour early to join Bob in the Waitrose café Horley, to await the gang from North Cheam. This gave time for a bacon roll, some chat and an unexpected solution from Bob to the previous Sunday's curious incident of the disappearing C&M at Hedgerly. 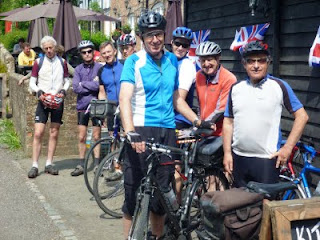 After an extended elevenses, leader Andrew marshalled his men and made off at a smart and wind-assisted pace in cool sunshine. A S.Westerly tack took us through Charlwood, Ifield, Faygate, Colgate, Partridge Road down to Hawkins Pond and up to Mannings Heath. Despite a slipped chain or two, it was then an easy spin via Monk's Gate to the Black Horse Nuthurst. Some supped at the pub; the black sheep grazed in the shadow of the Church of St Andrew; Andrew chose the bus-shelter.
Our return was South to Mapleh 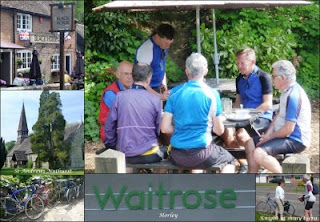 urst, West to Copsale, North to Doomsday Green and the outskirts of Horsham, where two gentlemen of our number leapt to the aid of a cycling damsel in distress with a wayward saddle. Secured and safely mounted, she was then able to resume her duty visiting wayward residents who had failed to return their census forms. Our duty was to mount Old Holbrook on our way to tea and cake at Capel. With sugar in our veins, it was then a familiar skelter via Newdigate to Dorking and West Humble, where some took the low road to Leatherhead and some the high road up Little Switzerland, each then to choose his own way home. Many thanks to Andrew for leading us on a sporting ride; 60 enjoyable miles for me and many more for others.