As I left, it was overcast with unheralded spots of rain but soon improved. The last of surburbia were Fetcham and the Bookhams; next we rode up the once feared Dirtham Lane and down Combe Bottom to Shere's Lucky Duck where a baker's dozen sunbathed. The road from Farley Green up to Winterfold led us past an intrepid though timorous bunny squatting in the road. Cranleigh was reached just after noon. Here Irene and John G opted for a shortcut; the rest were made of sterner stuff. After Clarkson's Dunsfold, it was across the border at Durfold Wood and the descent to the Marie Celeste, actually the Ye Old Sun Inn in Plaistow. It was open but no staff(!), customers and "no food at weekends" meant our morning was not yet over. We sped past Iford, like Durfold Wood, a relict of the 30s when large estates could be sold off easily for weekend/holiday homes.

Lunch was beside the Wey & Arun at a crowded Onslow Arms in Loxwood. Industrial archaeology is not C&M's forte so the return was all tarmac. Rudgwick and Oakwoodhill led on to Weare Street where the dappled sunlight and a poor surface made for interesting riding. One final act was to rejoin Irene and John for Capel's legendary tea and cakes. Around 75 miles door to door.
Posted by Anonymous at 07:41 No comments:

Loxwood, beside the Wey & Arun Canal 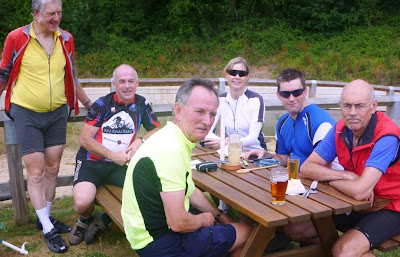 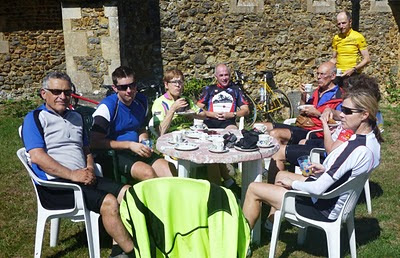 For a change the Kingston group were treated to Bushey Park deer, Feltham wheat, and amongst the Spelthorne sprawl, Europe's largest prison for women. As usual there was a sprint to the Luteyns teashop where in time our ranks swelled to fourteen including newcomer, David Leach. Three (and Bob) had other plans so the Irascible lead through the Great Park and then down the North road from Maidens Green to Moss End and Binfield where the Victoria Arms is a real find - a CAMRA boozer with doorstep sandwiches on Sundays with no pretensions to gastro. They even have bikestands (ok wheel benders) in the garden. We'll certainly come again.

Bob rejoined us and the meal was enlivened by Janice eating an oversized club sandwich whilst repairing a puncture - her first in over 15 years! She needed coaching but otherwise it was all her own work. Too soon we were off exploring the Bracknell sewage works on a track unsuited to narrow treadless tyres. But it brought us out near Moss End and a second North road running from Warfield Church through Chavey Down and Ascot Racecourse and back into the Park. Tea was taken leisurely at the village shop before we descended to Staines and went our various ways. Yet another skin-reddening day of around 60 miles.
Posted by Anonymous at 10:41 No comments: 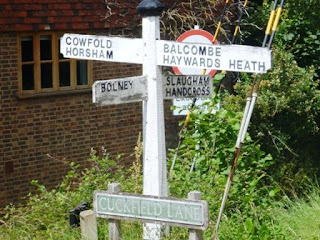 The weather was fine, some cloud and a cooling breeze from somewhere in the South for an independent ride to 11's at the Blu-Moon Café, Beare Green. Glimpsed en route two damsels cycling through the woods, too timid to allow me to accompany them, so I went on to warn our leader Ed of their approach. Time for a mug of tea and bacon sandwich (full English stoutly resisted) and some idle chat. We took due note of the polite invocation to users of the WC, before the assembled group split into two, one following Ed to Warninglid, the other accompanying the ladies to I'm not sure where. 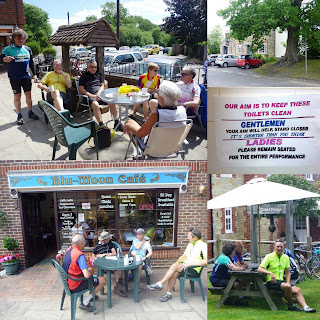 Ed set off at a pace and took us through Newdigate, Rusper, Faygate and up Tower Rd. Then undaunted, the whoosh down Grouse Rd to be followed by the heave up Hammerpond Rd, before crossing the B2110 for the final rise along Slaugham Lane to Warnignlid. Here we lunched at the rather pretentious Half Moon Inn, no snacks, the limited menu somewhat overpriced, though the fried fish was greatly in demand. However, the greatest treasure of the pub is a cider-press, used once a year and manned, we were told, by the Bald-Headed Club of Horsham. Some 150 gallons are fomenting now, but not for tasting before October. Our cider expert, Terry, was disappointed.

With Horsham in the way, our return for tea at Capel retraced our outward route. At the church, the two groups became one again, where the flower of Capel womanhood regaled us as always with the tempting richness of their fare. There were even some familiar faces, recognised from the Dieppe Raid. After tea and cake shared in mid-afternoon sunshine, the group remounted to set off home, for some a goodly distance still to ride, for me no more than 60 miles in total.

Our thanks to Ed as always for his good-natured guidance.