The fourcast was c--p and come the morning, sure enough it was raining.
Now as leader what am I to do ?
I was all ready to go then I had second thoughts.
"Ed,it's Andy,I'm not going out today".
Four hours later I began to have regrets as the day improved.
Apologies to anyone who made an effort.
Posted by Tartan Socks(long) at 19:19 No comments:

After ten days of more or less rain, the cleaning was over by 1000 hours thanks to 10% cloud cover – in truth a beautiful clear day but with a biting northerly wind. Calum’s road (see www.ctc-maps.org.uk/routes/route/570) was the chosen route; a mere 16.5 miles there and back with 11 (or is that 22?) arrows. At the far end (Arnish) we visited Calum’s house before doing the Fladday circuit on foot. At least three cars passed us with another ten parked at either Brochel or Arnish. To complete a busy picture we met 3 walkers and 4 MTBers who were on a similar outing to ours. Judging by the tyre marks, they had ridden short sections of the Fladday circult and walked the rest. No punters after tomorrow so we may be in for a quiet end to our stay.

Graham and (2 hills walked) Irene
Posted by Anonymous at 19:53 No comments:

With a new set of wheels, chain & cassette I set off for Wisley.
On approaching Epsom, I eyeball the clubrun and shortly expect to be tail end Charlie. However on West Hill the chain breaks apart and I stop whilst the club, unaware I was behind, disappear over the hill.
It turns out the connecting link was not properly attached (by me) and 15 mins later I had some catching up to do. So it was somewhat of a suprise to find the early arrivals sans clubrun.
The RHS was busy with the car park being relocated and the sunny weather bringing out the day trippers, the queue wasn't too bad but the prices were, £1.45 for "organic" tea (no Typhoo?) in a paper cup.
It's only the second time we've used the stop and I'm not sure if it's practical in the future after all we all have a budget.
We exited via the old road led by Simon to lunch at Puttenham, leaving Bob, Matt, Roger & Mike to make their own way home.
The route chosen was not one I would have taken but then again I like direct routes including rough stuff etc.
The assembled mass that was Simon, Ed, Ian, Steve, Ann, Pam, Keith, Janice and myself were delayed by lousy service on the food front but soon got going with a route largely influenced by me and the obvious route that took us via the NDW to Watts Gallery then uphill to join the A3/A31 junc then back onto the track that drops down into Guildford, up the cruelty that is Pewley Hill to rejoin the NDW all the way to Newland's Barn.
A fine picture of the cafe taken in 1955 hangs inside with a lady cyclist who, Keith thought, looked like Amy (Addiscombe) but with the sun still shining we sat outside.
Simon's Colnago which up until now had suffered several miles of good quality rough stuff was subjected to a further lack of tarmacadam when I suggested the "obvious" NDW route taking us down to W. Horsley.


If anybody read CTC Newsnet 25/05/07 and thought about going to the "cycle jumble" at Bosham, they would probably feel it's inclusion would guarantee a decent number of stalls.
Well there were less than 8 and I'm not happy!


As I write this, BST is on temporary hold, so my run tomorrow will reflect this. Anybody for Ashurst?
Posted by Tartan Socks(long) at 18:46 No comments:

The soaring temperatures of last month seemed a distant memory as five of us (Andrew, Ed, Keith, Simon & Mike) set off in drizzling rain with the weather forecasters only promising worsening conditions. Leaving Westerham after elevenses the weather seemed to ease but this was just a brief respite as Ed, Keith and Mike pedalled through downpours, and claps of thunder, on our way to Chiddingstone. The weather seemed even to deter the twitchers at Bough Beech reservoir as only a couple of binoculars were sighted. The pretty village of Chiddingstone is now largely owned by the National Trust and gets its name after a large carved sandstone boulder called the Chiding Stone. The power was off when we arrived at the pub and candles were lit as the rain poured down outside. The pub is very pleasant and friendly and at least the power cut saved us from the Spanish grand prix on the TV which was hastily turned on when the power resumed for a brief period. Then it was pedalling through more rain round Oxted and over the little hill to the Woldingham garden centre where Ed and Mike stopped for tea before heading home.

Posted by Tartan Socks(long) at 18:42 No comments: 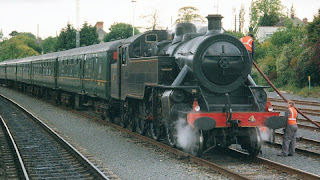 There was 12 of us at East Horsley; the official party coming via Stokeheath Road and the Hautbois. By name they were Daphne, Ed, Graham, Irene, Jake, Keith, Pam, PeteC. Bob, Pete Matthews, Ray and Terry were also there to enjoy a break but headed for home afterwards. The onward route was : Coombe Bottom and Ewhurst to a less than crowded Scarlett Arms at Walliswood. Until lunch it seemed the recent spell of fine weather was over but it improved slightly as we dawdled in the garden. Daphne's route back was energetic: to Forest Green and then past Vaughan Williams' Leith Hill Place before the long descent to Dorking. The afternoon stop was different: the Surrey Wildlife Trust's Open Day at Norbury Park where we met up with Andrew, Jen, Roger and Simon. They had done the guided tour (logs, saws, charcoal, etc) but we settled mostly for the working display of steam engines. The plastic cup of tea or whatever was free with some even grabbing a biscuit or two.
Posted by Anonymous at 16:33 1 comment: 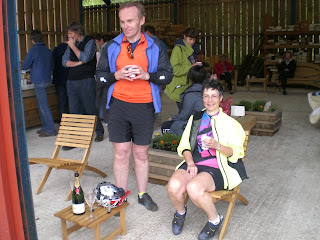 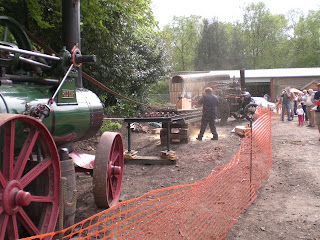 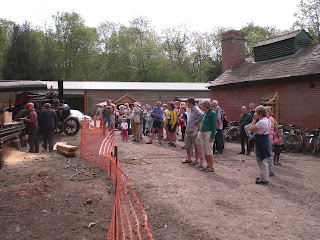 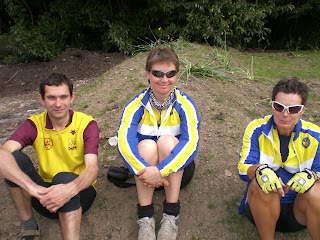 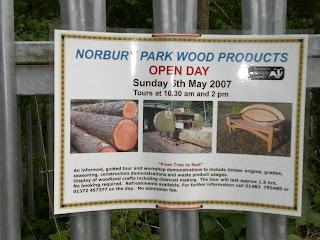 Pictures from Pam of Sundays ride to Norbury Park Open Day
Posted by Pete at 11:55 No comments: