Ten o'clock from the Spring Tavern, Ewell
Dear All

However bleary-eyed and unsteady you may be after the revels of New Year's Eve, I'm sure that you will be ready for a gentle introduction to the New Year with a gentlemanly / ladylike and civilised saunter, led by Pete, from the Spring Tavern at Ewell to Roehampton Gate, Richmond Park. After this, Ed has kindly offered us some light refreshment at his house in West Ewell, before we head for home. I hope that you will be able to come.

-6c a bit chilly so i rode to Cobham for coffee at Sainsburys via the main road. a good read of the sunday papers, coffee and doughnuts in the warm cafe, still alone at 11.15 i moved on to lunch at Cox Green
from Pete M
Posted by Pete at 15:49 No comments:

Rules of the Road - Instruction Video

One Way to Negotiate London's Traffic
Some of us were disappointed last Sunday that weather conditions demanded the cancellation of Simon's Cheam & Morden ride, through London to the Olympic Stadium. However, we all know what a stickler he is for safety. He always carries out a portfolio of risk assessments, including at least one recce. You may be interested to see this preview of what you might have missed.

Why on earth do cyclists have a reputation for reckless, insane and murderous behaviour on the roads? Perhaps the following link might give a clue!

Simon Legg just rang to say today's C and M ride is cancelled.
Posted by Terry at 08:29 No comments: 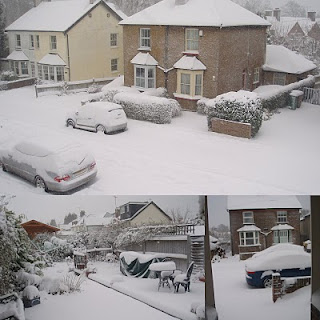 Saturday mornings snow in fact 2hrs worth from the Walton on the Hill outpost. I hope its not so bad for the Olympic site visit tomorrow though I have just heard from Wes (son in law) that he is stuck in car at Wandsworth trying to get back to Banstead.

Message from your CTC National Councillors

Below is the text of a message that Helen and Greg asked the Chief Executive of the CTC to issue to the members that they represent.
The Chairman of the National Council is refusing to allow this message to be sent to their constituents without an accompanying message from him.
Draw your own conclusions!

Here is the message that the Chairman found so threatening that it could not be issued without a parental warning:

As you may be aware, when you receive your copy of ‘Cycle’ this month it will be accompanied by a yellow sheet of paper. This sheet is a ballot paper and members are being asked to vote again on a motion that was put to the AGM in May.

You are being asked to vote again on Motion 8 – which is proposing that the Club be converted into a charity and merged with the CTC Trust. This motion was narrowly passed at the AGM, after the Chair of Council used his discretionary proxy votes to push it through. Prior to the Chair casting his discretionary votes the motion had been lost on the directed votes of the members.

This re-run of the vote has been forced upon Council by the action of ordinary members who were dissatisfied by the way that the vote at the AGM was handled and by the unbalanced view of the proposals which had been put forward by Council prior to the AGM. Contrary to what is implied in some of the messages currently being put out by those supporting Motion 8, the use of the Article 36 procedure to call for a re-vote is perfectly legitimate and proportionate, and it is a valuable protection for members’ interests enshrined in the CTC’s constitutional documents. Only 200 members’ signatures are required to trigger a re-vote under Article 36 – and over 600 members’ signatures were gathered in a very short space of time.

Before the AGM in May, we made it clear that we did not support the proposal outlined in Motion 8 and we encouraged you all to vote against it – and we regret that since the AGM nothing has happened to change our views on the matter. Unfortunately, Council has not fully grasped the opportunity arising after the AGM to put things in order within the existing structure.

We would urge all members to vote against Motion 8 in this re-vote.

We appreciate that our views put us at odds with the formal position of Council. However, we believe that we have an obligation to you, our members, to be open and honest in our views and to act to safeguard your interests.

However, whatever your decision on the merits of Motion 8, we would urge you to make sure you vote. Please be part of the decision-making process, rather than letting others decide for you.

We should also note that we are aware that some of the ballot papers sent out by National Office have errors on them (e.g. the wrong names or people who are eligible to vote omitted). Please check your ballot paper carefully and, if it is wrong, please contact Peter Jackson at National Office (peter.jackson@ctc.org.uk) to get a corrected ballot paper.

For further information on our objections, please see the Save the CTC web-site: www.savethectc.org.uk

CTC National Councillor for the South East
Posted by Jeff at 00:39 1 comment:

Take note Squires is closed on Dec 26th alternative is Sainsburys at Cobham
Posted by Pete at 07:17 No comments: 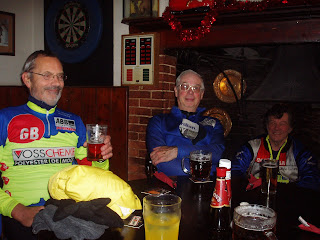 Jeff it's a long time since I had a combined Collage, we should do it more often. As you did not appear I thought that this one of Father Christmas alias Graham coming down the chimney and the rather splendid photo of Keith should also get an airing if only to prove that you were there. I enjoyed the Earl Grey at Fanny's and look forward to sharing a pot with you again. Fanny was a little taken aback when I ordered it with milk suggesting it must be a cyclist thing to which I replied No! just a Jeff thing. 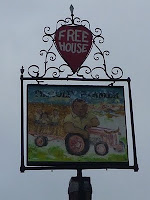 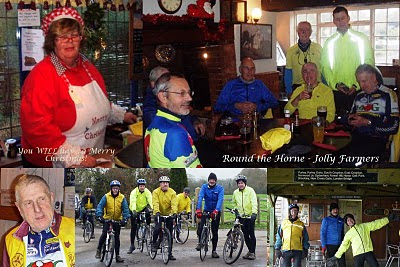 Combined collage courtesy of Mike and Jeff
Posted by Jeff at 15:38 No comments:

Saturday's thaw and light overnight rain left the skies overcast and a temperature hovering on freezing. As I arrived at Kingston Bridge, Dave was pedalling in tight circles trying to stay warm. He set a brisk pace as our duo sped past Hurst Park into Walton, then Weybridge and Addlestone where we were delayed long enough at the level crossing for cars to U-turn. Fairoaks were crowded and we were fortunate to arrive just ahead of a large Kingston Wheelers group. Two became six with Steph and Terry keen for more though Pete and Lisa had other plans. Chobham and the back of Bisley got us to an empty Cricketers at Pirbright around noon. An hour later the way back took in Old Woking, Ripley (via a slushy Tanners Lane) and Ockham. In Cobham all thoughts were on early baths/showers so no one stopped for tea. Home by three after 45 miles.

After five minutes alone at a chilly North Cheam Ed arrived. Keen to avoid minor roads, he took the A24 to Dorking (cycle path from Leatherhead). In ones our Henfold count swelled to double figures. Leaving Bob and Ray behind, a short route (Newdigate, Parkgate, Fox Revived, Horley, Smallfield) got us to The Jolly Farmer Horne by a quarter to one. Hearty fare and a locals welcome meant Ed's doggy bag was foil-wrapped! Surprising to me amounts of very dirty, very granular snow held no fears as the London to Brighton route in reverse led us to Fanny's for mince pies all round. Home in the dark after 60 miles.
Posted by Anonymous at 08:59 No comments: 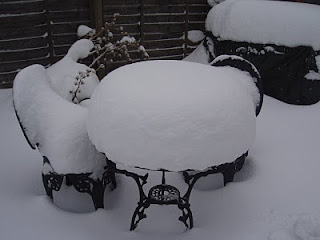 Well done Terry & Co for making it out today. Garden table and car on Thursday. I managed 6mls part off-road this afternoon down track from Walton on the Hill to Headley and then road to Ashtead. Returned in the dark to my horror the roads were like glass and I walked most of way back up Hirst Lane with Knobblies on MTB! 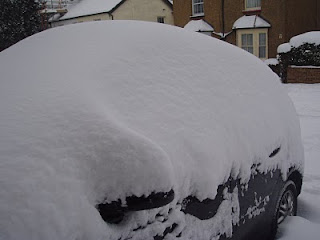 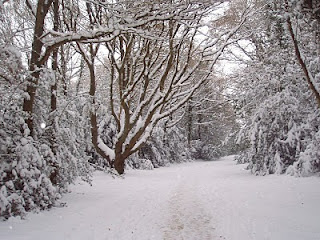 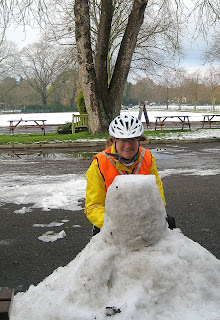 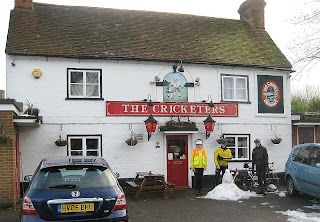 ....Not quite cricketing weather ?