I joined the bunch at Hookwood. From the centre of Horley we went south. I think Jake's planned route was via Shipley Bridge (B2037) but our actual route went the Wayfarers' way, Crawley outskirts then up Turner's Hill Road which well merits its five (and more) entries at FillThatHole.org.uk. Turning at the church, we sped down past Worth Abbey, over Balcombe Tunnel and through Staplefield to Slaugham mixing with a sportif along the way. The pub had food but only if ordered in advance so all went hungry or nibbled surreptitiously on produce from elsewhere. Over Ashfold Crossways and down to the hammer ponds was taken at a decent pace but we regrouped before Colgate and were still together for a round of cakes at Tanhouse Farm.

This FNRttC ride was a charity event with 120 starting from HPC at midnight, and very professional as Simon had made a risk assessment and signing-on sheets plus sag wagons for riders and bikes. Having the paper qualifications was my excuse; not that I had anything to do - no leading, no mechanicals; the smoothest/driest ride yet. A Penny Farthing (which shipped a pedal in Lonesome Lane), a "tall" bicycle (twiddled all the way up the Beacon) and lots of clunky MTBs are sights not normally seen on these rides. Cakes galore were on hand at the halfway point (the so called Horley Scout Hut around four miles from Horley!) We made Brighton in just over eight hours - quite an achievement as half had not tackled this distance before and I was home by ten thirty. The photographer has caught my better side - the back - so I've labelled my helmetted(!) self.

Once again I joined at elevenses, this time in Shere where the Palm Sunday procession was in full swing. A fine day produced a fine crop of cyclists including Lawrence in a CTC Central London group. Just five followed Ed out the door. His route had a simplicity - A25, A248, A3100 thus we arrived at the Jack Phillips in Godalming around 1220 so it was full Sunday lunches all round. Leaving around two, the way back was equally simple - A3100, the High Street cobbles, A25, A246. Keith and I took off towards the prison so here ends my tale.
Posted by Anonymous at 10:01 No comments:

They're already started - the rest of the schedule:

Thanks Bob
Posted by Anonymous at 16:27 No comments:

this starts from Kingston Bridge at 0830.
Posted by Anonymous at 19:52 No comments:

Andy is unable to lead the ride on March 14th so the train-assisted ride is off. I'll be at Surbiton Station just in case someone turns up. If you want to join me afterwards, I'll be linking up with Irene and Pam at Fairoaks around 11:00. Lunch is vague and as it's Mothering Day, I'm definitely taking sandwiches. 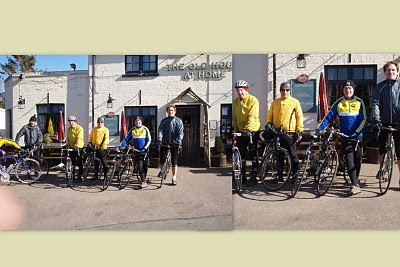 (Apologies to a truncated Graham)

Sunday morning and it seemed that El Nino had relented: the sky a clear, icy blue. However, several layers of thermal protection were needed before heading North to pick up Ed, John G and Graham H at the N. Cheam staging post. Then it was into the sharp-toothed Easterly wind that was to accompany us nearly all the way to Oxted. The route took us along what is probably the most benign incline to Botley Hill: Sutton, Carshalton, S. Croydon, Farleigh and Warlingham to the top of Titsey Hill. A short, wind-assisted freewheel along The Ridge brought us to the top of Chalkpit Lane for a brake-testing, white knuckle descent to Oxted Station and the superstore café at Morrisons.

With their teapots already half empty, Bob, Pete B and Pete F were waiting. There was still time for a hearty English breakfast before setting off, as Dormansland was fairly close and downhill, with no intervening outcrops. A pretty leisurely jaunt took us through Broadham Green, Staffhurst Wood, Crowhurst and Lingfield to The Old House at Home in Dormansland. After a leisurely lunch, sound food and service, we were off again on the way back to Redhill via Newchapel, Horne (which does have a bit of a hillette), Outwood, S. Nutfield and Philanthropic Road. Tea was planned for Fanny's but the Red Arrows did a sudden starburst and I had lost them. However, half-way along Rocky Lane I discovered the two Petes escorting me on my wing tips all the way to the fabulous Fanny, where we were very soon joined by Graham. Ed and John had plumped for Wetherspoons.

Pete B was greeted like a long lost lover by Fanny, as he had offered to provide her with some railway memorabilia - but he still had to pay for his coffee. We took our tea in the shelter of the Pagoda, tastefully walled with mattress springs, before heading back to base, still in bright but dazzling sunshine low in the sky. Pete B and I accompanied each other to Chipstead and the A217 before a final farewell wave.

We had enjoyed a day of sunshine, blue skies and not a drop of rain, sleet or snow all day, though in places there had been ice and slush on the road, the temperature barely rising above zero. For me the distance home to home some 54 miles.

Hilly 50 on You Tube

Our Staines correspondent tells me that Bookham Common is "impassible" due to tree felling/clearing operations. She managed to get through but you have been warned!
Posted by Anonymous at 18:06 1 comment:

This was a day which started dull and above zero but ended bright and below zero due to an east wind. A week without rain left the course dry with its potholes and mud clearly visible so perfect for this event.

Most of the 134 riders got away on time whilst others suffered train delays or punctures and started up to 20 minutes late. GD came home in his usual 1:50 followed by a couple more in 2 hours with the rest spread over two more hours. Five punctures and a visit to Peaslake (not on route) topped the tales of woe but most enjoyed it (so they told me).
Posted by Anonymous at 17:42 No comments: