As I passed, the (new to me) Ivy Tea Rooms at the back of The Old Plough in Stoke D'abernon were open; seating alfresco (something warmer in winter?) Meanwhile Deputy Ed was leading from North Cheam via Malden Rushett, Cobham and The Hautboy to West Horsley where a decent crowd(19) was enjoying the long delayed summer. Half were out for the morning only. So it was the other half which witnessed Jake's distress at losing her lock key. However a blunt hacksaw and lusty efforts from Ed and Steve cured that. Belatedly ten (Ed, Ann, Daphne, Graham, Jake, Keith, Paul, Pete, Steve and Terry) headed off towards Guildford.

Unusually we rode Staple Lane to the top of Coombe Bottom; the rest was obvious: Shalford, first left after the crematorium, second left after the level crossing and we were in the garden of The Cricketers at Farncombe. Barbecued fare was to be had at around £3 and we bathed long in the sunshine before heading back on a slightly devious route. Backroads took us to Wonersh then Chilworth and up Halfpenny Lane; Terry and I stopping to admire alpacas in Chilworth Manor. In normal years the track from White Lane to Newlands is rutted concrete but 2007 is very different. Most walked and those with mudguards had gardening to do when they reached tarmac. The waitress service at The Barn was in some confusion and we ended up with an extra pot of tea - it could have been more if we said "we're number 28". Noboby fancied more of the NDW so it was down to the Epsom Road and a split at East Clandon.
Posted by Anonymous at 19:40 No comments: 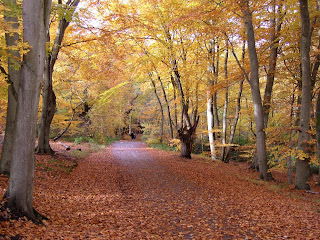 CTC South Bucks has issued an open invitation to its Golden Beeches Weekend, 27-28 October, at Great Kingshill near High Wycombe. Choice of led rides each day, slide show, catering at hall. Booking information and form, and accommodation list, now at www.southbuckscycling.org.uk
Posted by Pete at 19:44 No comments:

Transport for London (TfL) has today launched the latest edition of its popular free bike maps covering the whole of London.

The new set of 14 maps, developed with the London Cycle Campaign, are double-sided, hard-wearing and contain a wealth of information about 4,000km of routes. This includes the London Cycle Network Plus (a network of signed routes for cyclists across the capital), the National Cycle Network and routes through parks and canal towpaths.

The easy to use maps help cyclists to identify quick or quiet routes wherever they want to travel in the Capital. The cycle routes featured have all been ridden and recommended by experienced cyclists.

The cycle maps are available to order a month ahead of the Hovis London Freewheel, a fun, free bike ride open to all Londoners taking place on Sunday 23 September. Tens of thousands of riders are expected to cycle into a 14km central London route free of non-cycle traffic passing some of the Capital's most iconic sights. For more information and to register for the event, visit: www.londonfreewheel.com.

Ken Livingstone, the Mayor of London, said:
“'Cycling is the fastest, cheapest, most healthy and environmentally friendly way to get around London. These new cycle maps will make cycling in London easier and help cyclists explore a whole new side to the capital by discovering literally thousands of short cuts and little known paths.”

Jenny Jones, the Mayor's Green transport advisor, said: 'Londoners are realising that cycling is fun as well as efficient. These new maps and the Hovis London Freewheel will give everyone a chance to find that out for themselves.'

Charlie Lloyd, London Cycling Campaign, said:
"The London Cycle Guide maps have proven to be the most useful aid for anyone cycling in London. They provide all you need to make cycling the quickest, most effective way of getting around London. The wider coverage of the new edition Cycle Guides is exactly what we need. Discovering new areas and new routes is easier than ever. "

The maps can be requested online from www.tfl.gov.uk/cycling or by calling TfL’s customer service helpline on 020 7222 1234. They are also available in cycle shops throughout the Capital.
Posted by Pete at 06:42 No comments:

Greetings all after a enforced break because of technical problems to do with signing in to Blogger, cookies, passwords, Firefox, IE6 and anything else that shortens my attention span.

A few words about my run to Denham via Grand Union Canal. Just Ed and myself took Thames path to Teddington Lock then north to Syon Park where we found the cafe shut. On leaving the park we met Bob coming the otherway. Osterley Park was to be the alternative and this to was to prove a fruitless trip since it was also shut. Bob left us as we headed toward the GUC and a late 11's at Hayes (Bulls Bridge) Tesco.
My Dutch Vico Perfect, from the Gazelle stable, sustained a puncture, but apart from that our route was incident free arriving at Denham Visitor Centre at 1pm.
Tea was at The Orangery (Upper Halliford).

The rain was coming down but that didn't stop me, I'm keen (on points).
Unusually, I chose the higher road (A246) on account of light traffic to 11's at Shere.
The Lucky Duck produces mixed reactions amongst members with Simon ("hate it") to Ed ("I like it here") the latter more to do with his affection for attractive, young staff than the prices.
That said, by opting for £1.80 unlimited filter coffee (I managed 4 cups), dare I say VFM?
It was midday and we clearly had no intention of going any further so Simon and Keith headed off in the direction of Dorking via the lanes which left Ed, Ray and myself to ascend White Down.
Puffing, Panting, Sweating I arrived at the top with Ray barely a wheel length behind, he's 81 you know, quite remarkable. I think he said his resting heart beat is 43 bpm. Crikey, we have a super fit human being in our ranks.
33 odd miles, 35 max, 12.3 ave.
I'm handing the reins to Ed next week, I'm returning a colleague a favour and working his shift as well as my own, I hope it rains (only joking!).
Posted by Tartan Socks(long) at 15:39 No comments: 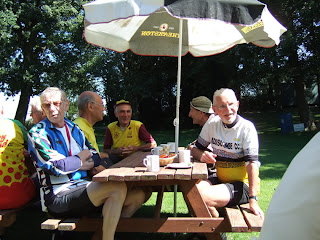 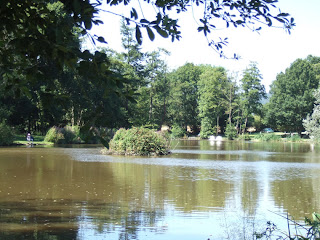 Henfold Lakes for 11s on Sunday 5th August Pictures by Francoise
Posted by Pete at 06:35 No comments: 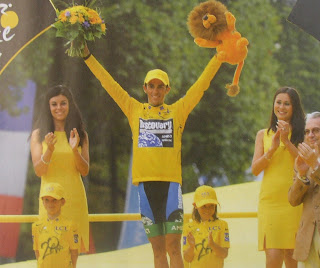 David Aylett (Phone no on The Sou'Wester) offers to lend the complete 21 days as put out on the highlight programs now recorded on Video if you missed it and wish to catch up contact David
Posted by Pete at 16:11 No comments:

On the hottest day of the year so far, Henfold saw an allsorts of cyclists. I counted around 20 C&M, plus Downlanders, Addiscombe, Clarencourt and a handful of independents. Eventually Keith led 11 (Daphne, Ed, Emma, Graham, Irene, Jake, welcome back John M, Paul, Petes B and C, Terry) on an energetic and roundabout route via Capel, Jayes Park and Mole Street to Walliswood then north to the Polo Grounds and south to Rudgwick and the King's Head. Most sat outside though Ed lingered over the Sunday newspapers (or was it the barmaid?). For many thirst could only be quenched by second helpings so a leisurely lunch was enjoyed by those who took that option. The route back was simplicity itself: Oakwoodhill and Weare Street to Capel Church where cakes and the odd cup of tea were downed. Simon and Jen joined us and discussion turned to next year's Easter tour which is on March 23, the earliest date since 1818 and before clocks go back. Speak now if you've any suggestions.
Posted by Anonymous at 20:47 No comments: