Fat chance of me reaching Banstead by 0900 so I settled for an 11s rendezvous at Godstone though I shouldn't have tried the very muddy (for the time of year) Banstead Heath.

Just four (Ed, Dave, Helene, me) climbed Tilburstow to encounter not one but two events (a road race and a sportif) near Crowhurst. From Edenbridge, we headed towards Four Elms and then it was upwards. The climb felt harder than anyone could recall; at the top all was revealed - we were at Toy's Hill (100 feet higher than the intended Ide Hill)! But it was one o'clock and The Fox And Hounds was both close and eager to feed us.

A long after lunch downhill brought us to Brasted and then it was upwards again along the Pilgrims Way. By White Lane it was my chance to lead the others astray though we retraced from near Beaver World. Thankfully four miles later we were at Farleigh Church for double helpings of cakes.

Cloudy, very windy, occasionally drizzly - not at all weather to grace the longest Sunday of the year. Around 70 miles door-to-door.
Posted by Anonymous at 11:25 No comments:

Another new start point this morning...........Cafe Nero in Reigate's Old Town Hall.
Just Ed & Dave joined me at the strike of ten to ride the delightful Lonesome Lane to Waitrose in Horley.
By collecting a "MyWaitrose" card,this will entitle you to a free tea or coffee,with few conditions.

Brian was out on his new Van Nicholas but returned home with Terry.
Seven of us climbed the B-road past Tulley's Farm to briefly mingle with the L2B bike ride at Turners Hill but soon turned off toward West Hoathly & Sharpthorne.
At Tyes Cross we headed south up and down a couple of hills to Chelwood Gate PH.
No food here (due to Father's Day) so after a quick glance at the map,a "PH" appeared to be a short distance away in neighbouring Chelwood Common.

For info:The Coach & Horses is a good establishment but is marked by a phone box on OS 187 not PH sign!!!

The delay in finding food caused a 2.30pm departure but we were soon descending then climbing to Danehill and an additional stop at Horsted Keynes station (to view the Bluebell Railway).
The original plan was to rejoin the Turners Hill road going north to Ardingly but this idea was abandoned thanks to the L2B which still had to clear this part of Sussex (the road was basically closed north bound until 6pm).
Plan B involved riding with the mass to Lindfield where we took a right to tea at Borde Hill gardens. 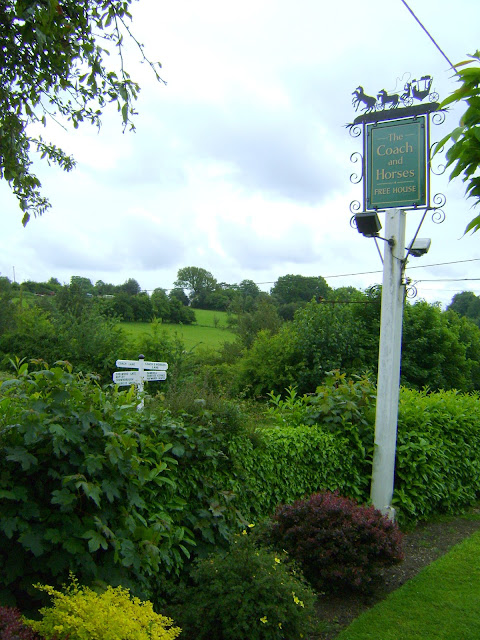 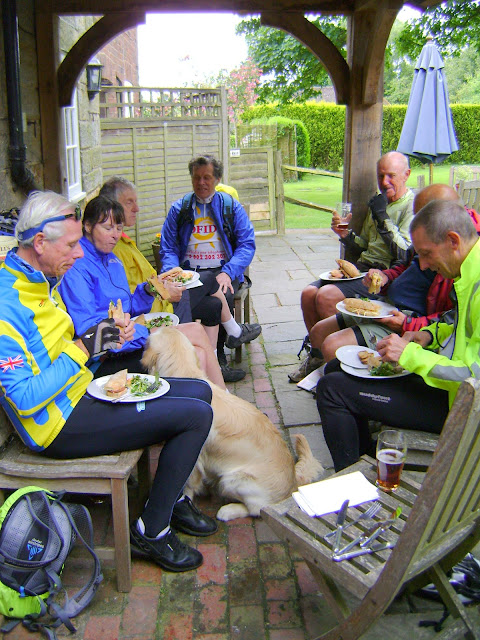 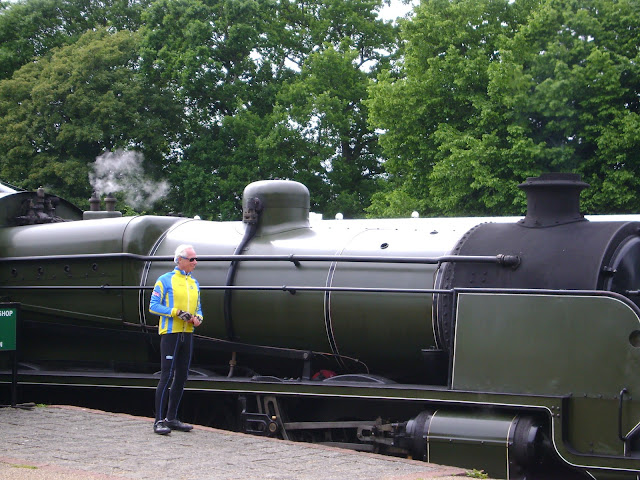 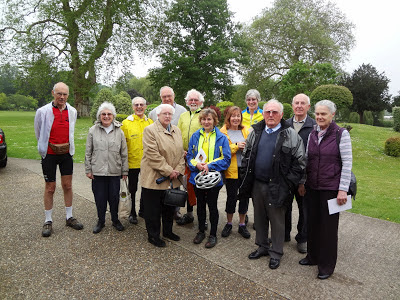 Many friends and family attended the service at Randalls Park @ 11.45am today. Fitting tributes were given by Anthony a long time friend of Deanna & a C&M member. He was clearly devoted to her and as with all her family & friends will miss her a lot. Perhaps the most fitting tribute was given by her brother Vincent who gave very moving and heart felt memories of his early years with his sister and more importantly in recent years until her passing. She was apparently a remarkable woman who after retiring took two degrees, one in art and the other science - quite an achievement! 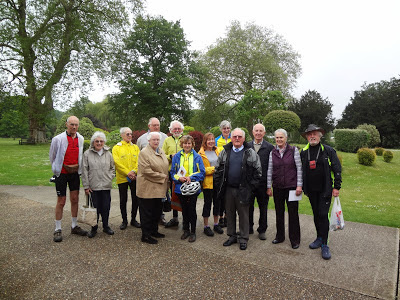 The pictures show those cycling friends that were able to make the service. It was good to see Pat Mathews there thanks to David & Dawn who gave her a lift. (excuse the plastic bag in my hand it contained 2 trophies for Collin Quemby) 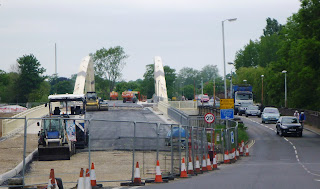 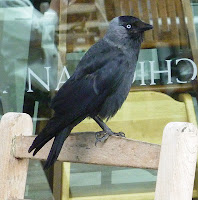 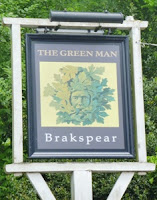 10 set off from Magna Carta tea rooms for lunch at “The Green Man” Hurst Wokingham, then tea at Savill Gardens via Windsor Park, Maidens Green, Moss End, Shurlock Row to Hurst, returning via Beenham Heath, Drift Road to Windsor Park, quite cold and breezy but dry. Many Thanks to everyone. 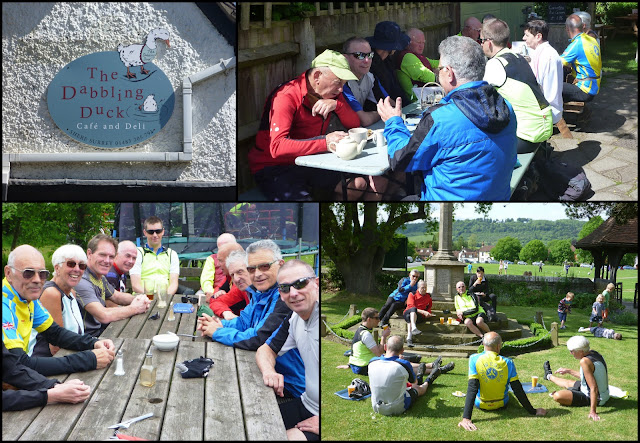 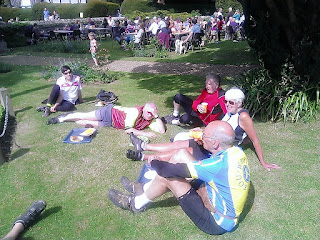 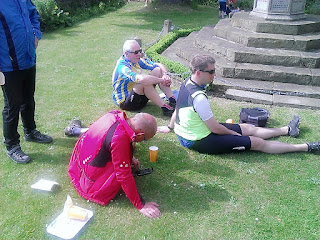 Enjoying Tea and Cake at Brockham
Posted by Tony at 21:18 No comments:

Having had to cancel my last two leads due to weather, I was pleased to wake to a cloudless sky (it didn't stay like that for long, but at least it didn't RAIN).

11s was at the refurbished, re-managed, re-named Dabbling Duck at Shere, nice but unsurprisingly pricey.

We headed south, shortly turning right to Little London and Brook. By now we had noticed several competition cyclists, fortunately heading in the opposite direction. From Farley Green we passed Farley Heath to Shamley Green where Hullbrook Lane led to a short stretch of N22 before joining the Downs Link. This was quite popular with walkers and cyclists, but well worth using for the peace and quiet and absence of road vehicles. We occasionally noticed stretches of the Wey and Arun Canal - sadly not in a usable state. Leaving the Link on the outskirts of Cranleigh we headed for The Little Park Hatch, via The Common, Horseshoe Lane (past the manicured lawns of Cranleigh School - not a dandelion in sight), Amlets Lane and Barhatch Road.

Nice lunches were quickly served after which we continued east to turn right into Gadbridge Lane to Ewhurst Green. After Plough Lane we rejoined the B2127 (don't use Lower Breache Road - it has a terrible surface) then followed the 'usual route' to Newdigate. A variation from 'normal' - in Newdigate we turned right, shortly left into Church Lane then New Barn Lane leading to Parkgate and tea and cakes at Brockham. The church hall is currently being extended so teas are served in a marquee - they taste just as good. After tea we went our separate ways, having enjoyed a fine day out on quiet roads through green countryside (something in favour of RAIN ?).

Good to see John Gould out enjoying a day off from chemotherapy.