A Very cold morning and ride to Windsor. Graham, Irene, Alan and Bob had already arrived were warming up. Soon after I arrived John and Carolyn Arrived as did Vic. John and Carolyn were not going to join us and Vice was off somewhere with his camera. So just Irene, Graham and myself set off for the Bear at Maidenhead, Bob was going to make his own way there. Off heading west to Clewer then Oakley Green and onto Fiffield.  Then onto Bray and the nice off road section at Braywick and across the Bath road heading toward Cookham with a loop round just past Bolters lock and back the Bear for lunch to meet Bob who had just arrived.

Wined and dined we headed back towards Dorney and along the Jubilee river to Datchet, having decided not to stop for tea we left Irene heading towards Wraysbury and Graham and myself towards Poyle where Graham turned to Stanwell Moor and me to Longford and home. A very cold day but the Sun did help. Very short on numbers but not surprising considering the temperature. 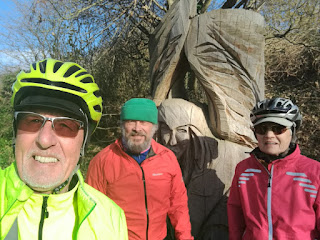 On the track through Braywick
Tony..
Posted by Tony at 17:33 No comments:

Lunch will now be at The Bear (Wetherspoons) Maidenhead. 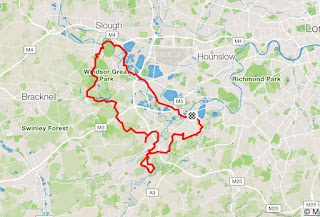 Graham, Vic, Paul, Ed, Irene, Pam and I met for the ride at the ever-busy and newly-refurbished Bourne Valley Garden Centre café, and Alan, Bob and Terry joined us for elevenses only.   It was a glorious morning but rather chilly, so I thought a few climbs to keep us warm would be the best thing!   Accordingly, we set off for Virginia Water via Ottershaw, Kitsmead Lane and Wellington Avenue.  I decided the preferred route, the shared path around the lake, would be a little busy on such a lovely day, so we headed west to Blacknest and entered Windsor Great Park at Cheapside instead, much quieter but still with delightful scenery.   We left the park at the Rangers Gate and picked up the cycle route to Spital, then dodged round some backstreets to reach The Windlesora, Windsor’s other, less touristy Wetherspoons!    Service was quick and friendly, and we all enjoyed good meals.   No hills at all on the return trip, just a few hump-backed bridges as we motored through Datchet, Wraysbury and Staines at a steady 12 mph to reach the tea stop at Laleham just after 2.30 pm.    Many thanks to all for a problem-free ride and I hope you enjoyed it.   Mea culpa – I forgot the customary group photo hence the map!
Posted by David W at 17:20 No comments:

Thirteen met at West Horsley Squires but, fortunately for the superstitious, Alan, Bob and Donald did not join the ride. We headed east, our entry to Chalk Lane being delayed slightly by about a couple of dozen Harley Davidsons burbling past in the opposite direction. Ascending Greendene and descending Combe  Lane we saw many other cyclists out on training runs. To Shere next via Rectory Lane, over rather than through the ford then a change from normal by using Church Hill before joining Sandy Lane. On to the outskirts of Peaslake where we followed Hoe Lane to Horsham Road. Just short of the junction we met a car travelling in the opposite  direction. I stopped, so did the car – I wanted to warn the driver there were more  cyclists coming. I recognised the driver as an old friend and former works colleague. He was and is very keen on motorcycle racing. Many years ago he prepared and rode his own bike in the Clubmans’ races (not the TT) in the Isle of Man and finished third in his first race there. Now his two sons are doing nearly as well. We joined the B2126 as far as Sutton Abinger then via Sutton Lane, Donkey Lane and Hollow Lane we reached the A25. Turning into Balchins Lane we avoided main road traffic and noise. There were wonderful views of the trees on Ranmore in their various autumn colours. On the outskirts of Dorking we turned left into Station Road, shortly right into Parkway then across Meadowbank to the cycle track  to Leatherhead and lunch at the Edmund Tylney. By the time we had all eaten and drunk and chatted it was 1500 hrs and it was unanimously decided to head homewards in the daylight.

Edmund (later Sir) Tylney was  the Master of Revels (I’m not joking) for Queen Elizabeth I and King James I and lived in Leatherhead. He had great influence in the censorship and developement of drama.

My original lunch venue was The Scarlett Arms but after a recce I decided it was a pub too far. Tracey, the landlady was scheduled to have left by now, (going to pastures/pub new in Cranleigh) to be replaced by one Jill. Another redoubtable lady leaving us.

Thanks to all for company, David for tec and people various for corner marking. I hope we have a few more Sundays with such agreeable weather. 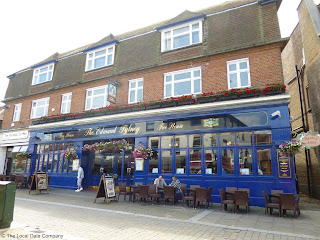 Having recced my proposed route I have decided to shorten it. The 11s venue is unchanged at West Horsley GC but lunch will be at the Edmund Tylney at Leatherhead and 3s at Painshill if we are there by 3.30.

High Barn Road and Hogden Lanes led us to the top of the Downs. Then began the long descent from Ranmore Common into Dorking. We left the one way system at Horsham Road before crossing from west to east using St Paul's Roads. After a brief dalliance with the A24 Blackbrook was next. Here a glance at the watch indicated time for an offroad detour so we turned left at the still muddy waters of Forwents Pond. We now encountered an unexpected hazard - smartly dressed riders and horses, dozens of them! They'd done their best to ensure that any mud was well and truly churned. But soon we were through and heading for Shellwood Manor. It needed a burst of evens to ensure that we (or more accurately I) reached The Royal Oak reached at the appointed time of 1230. It was heaving but already arrived were the softies who'd used the Gap. That made 16 (more than my guestimate of 10). However by the time the food arrived the pub had emptied (to watch the Morris Dancers?) and we were all seated.

With no intention of stopping for tea I led across the Coach Road to the A25. In Pixham Lane came news via Ann (and presumably Steve) that a rucksack had been left at the pub. Mine! so here my ride ended. And to make matters worse - crossing Ashstead Common I punctured, a lengthy stop as it took forever to inflate the tyre with a mini-pump. Home before sunset (1630) after 50 eventful, stressful miles.

Apologies for the mud; none on Wednesday's recce. Finally that letter box: TQ181591


Posted by RaasayWarden at 08:36 No comments:

Table booked for 1230 as it could be heaving. Festivities last the whole weekend so expect Morris dancers on arrival. Ranmore Common and Dorking town centre are on the official route though I hear rumours that some "softies" may be taking an alternative route with no hills! The choice is yours. 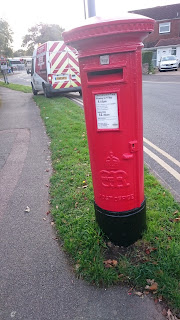 An Edward VIII letterbox spotted on my route home - not many of them about. Won't tell you where it is but there's a big clue in the background (no it's not the Virginmedia van).
Posted by RaasayWarden at 08:19 No comments: