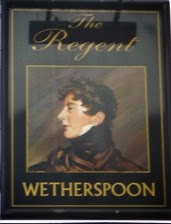 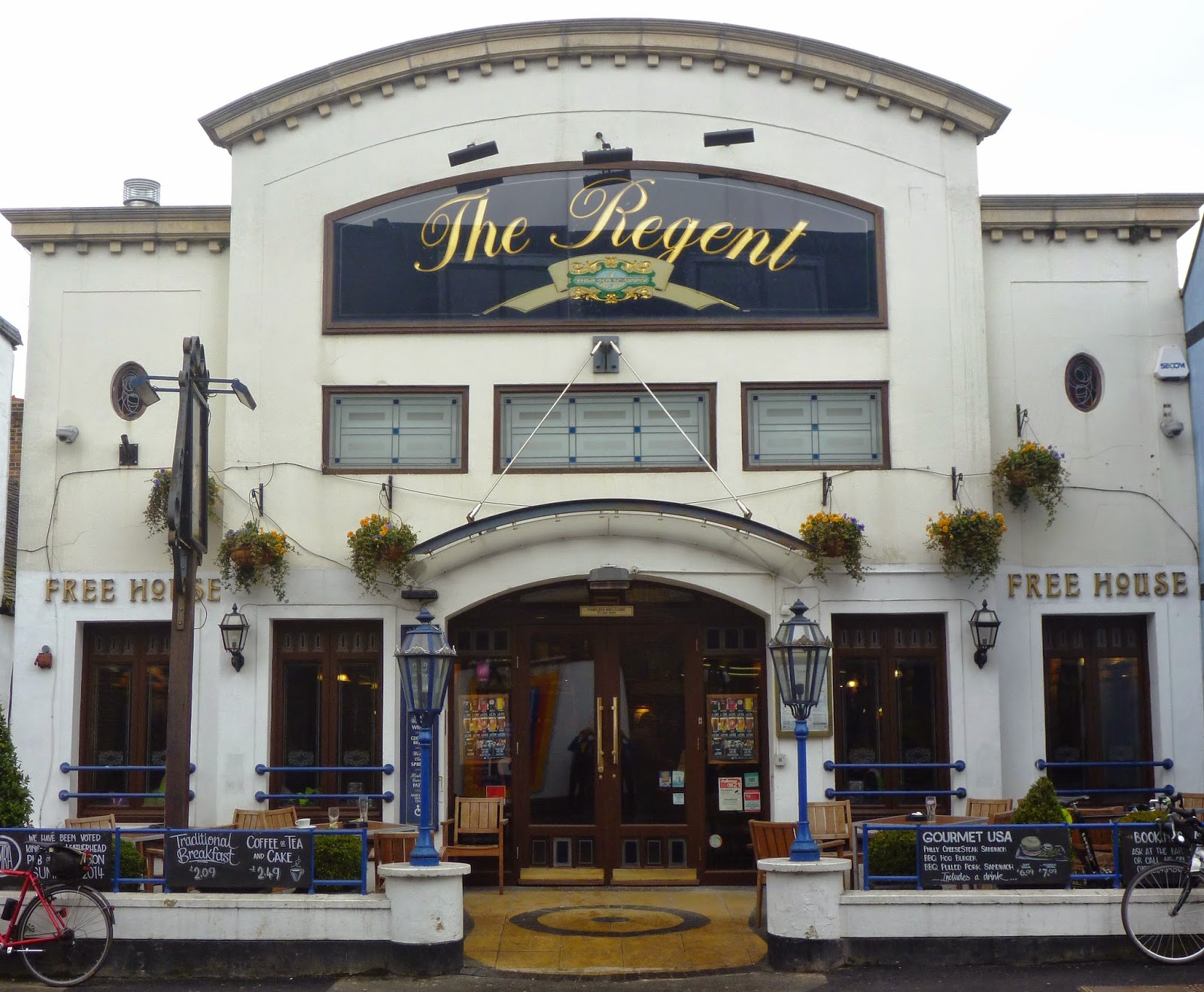 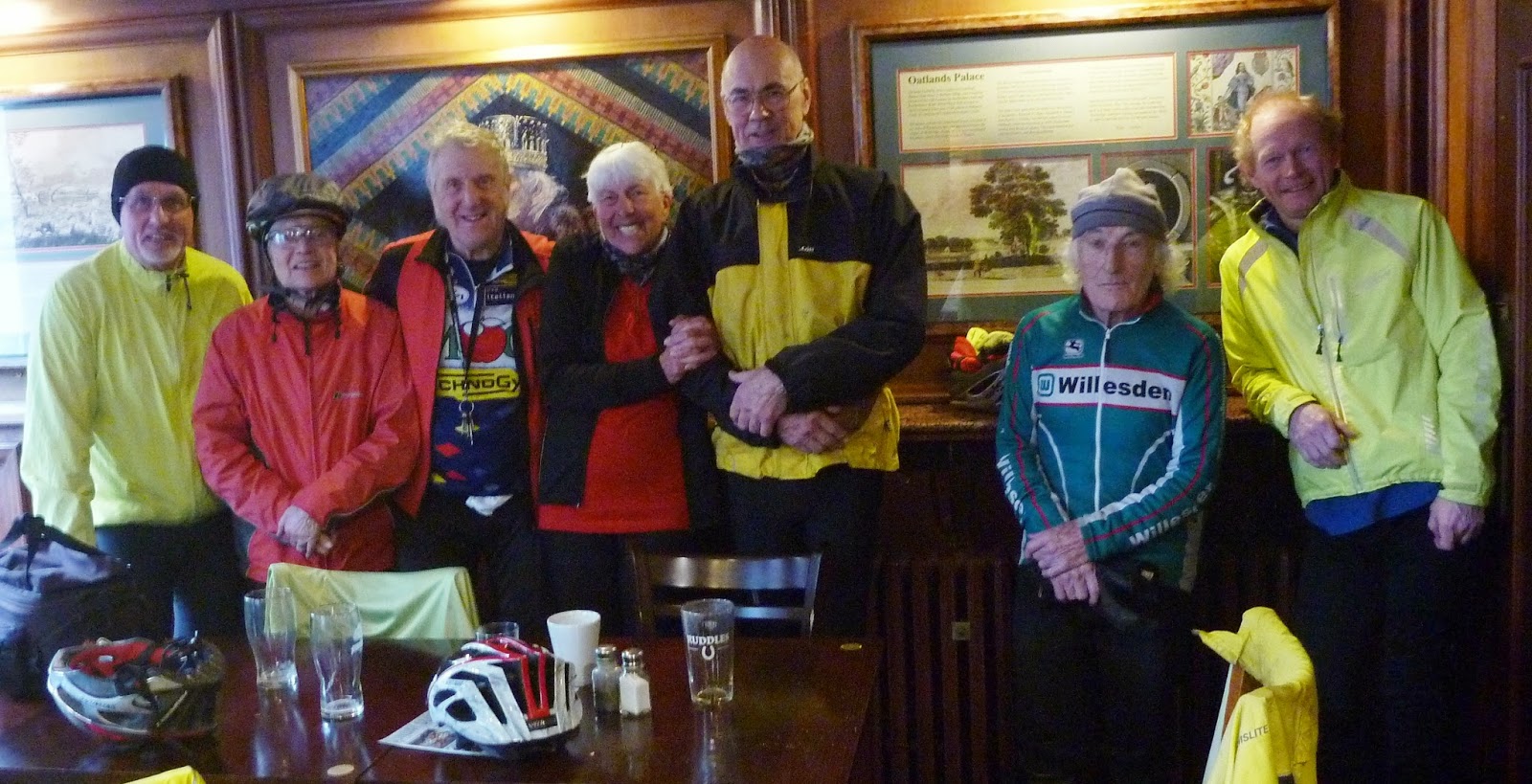 Ante-meridian sun encouraged fourteen to face frost and ice to share a cup of tea and company at the pleasure gardens of West Horsley. However, as the tea-pots emptied, the skies began to cloud over. Come the time of departure, leader Ed's thrust unusually was North, not South, not Irene. Some could not, dared not  resist the lure of Sunday roast at home, but others took up the challenge. Ed led us via the cyclists' mecca, Ripley, where we did not drop anchor, to West Byfleet, New Haw, around Addlestone and Weybridge to Walton, where we found refuge in that ever welcoming port in every cyclist's storm, the trusty haven of Wetherspoons. Space for all, good ale and solid food (though not for Neil, who was still recovering from the previous evening's intemperance, celebrating the Chinese New Year). He did force down a few abandoned and rather luke -warm chips.

By this time the forecast rain had begun to settle in, the lure of Thames Ditton for tea was waning, some preferring to explore the temptations of the Lidl/Aldi? store across the road, while non-shoppers put on their waterproofs and headed home. We did get home in daylight, despite the howling wind across the  Downs that threatened life and limb. I trust all made it safely . Our thanks to leader Ed.
Jeff
Posted by Jeff at 18:58 1 comment:

A day of daffodils, crocuses, grey skies to blue and late afternoon sunshine
Posted by Jeff at 13:59 No comments:

Thirteen came to Savill Gardens for morning refreshment, and eight continued with Bob making his own way to lunch. We passed through Windsor Park to Drift Road, Maidens Green and Moss End (goodbyes to Alan) arriving at the Victoria Arms Binfield at 12.40 pm. where a table was reserved for us in the name of Morse?!
Lunch was very good and served quickly. We left an hour later making our way in glorious sunshine over Cabbage Hill to Warfield church,  across Ascot racecourse and back into the Park. Laleham Garden Centre was reached at 3.15 for more refreshment (phew). Here we dallied for over an hour so I hope everyone (including Jeff?) managed to get home in the light. A big thanks to all for coming and making for a very pleasant day.
Irene
Posted by RaasayWarden at 12:42 No comments:

The Annual Gathering of the Cheam & Morden Clan 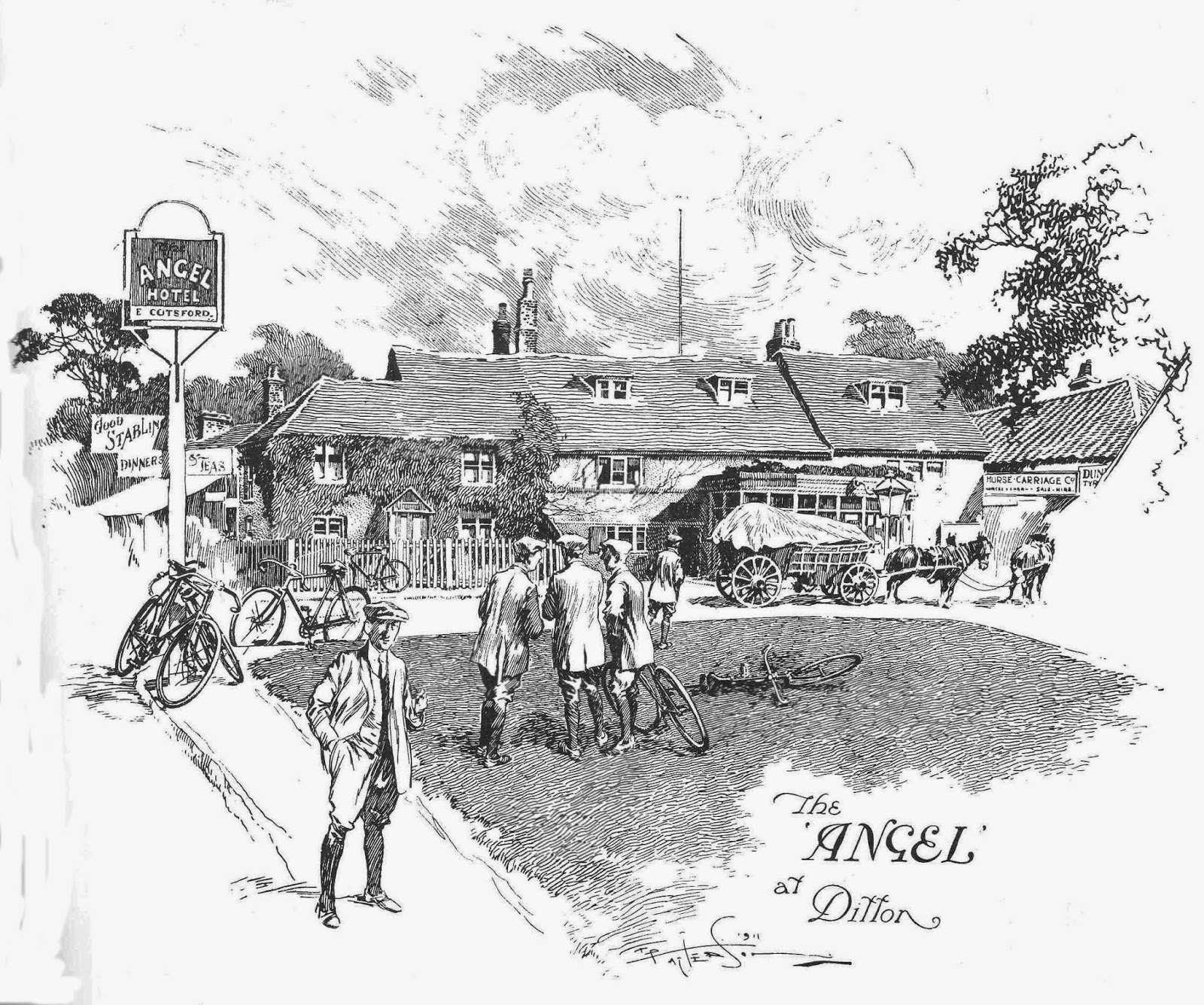 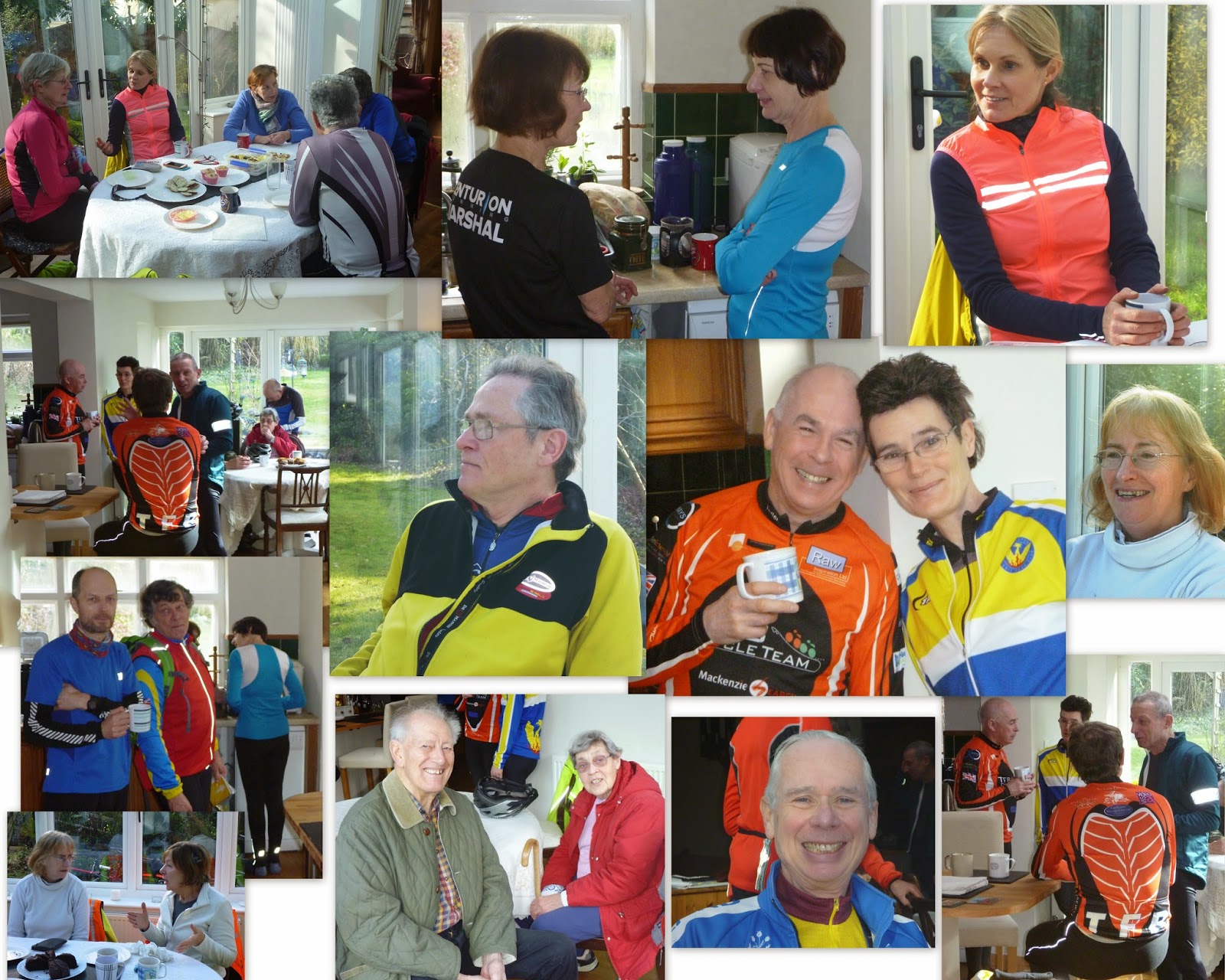 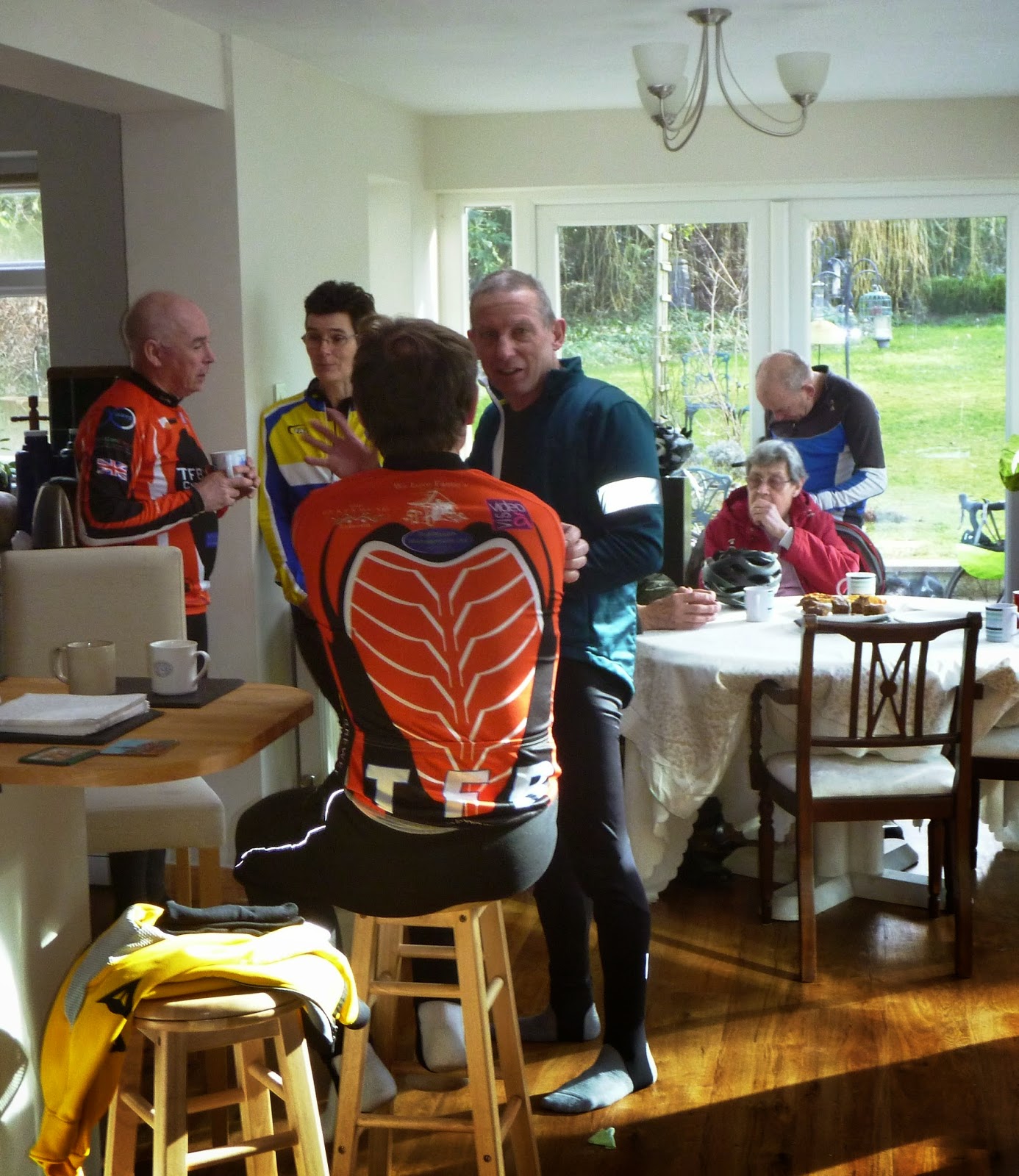 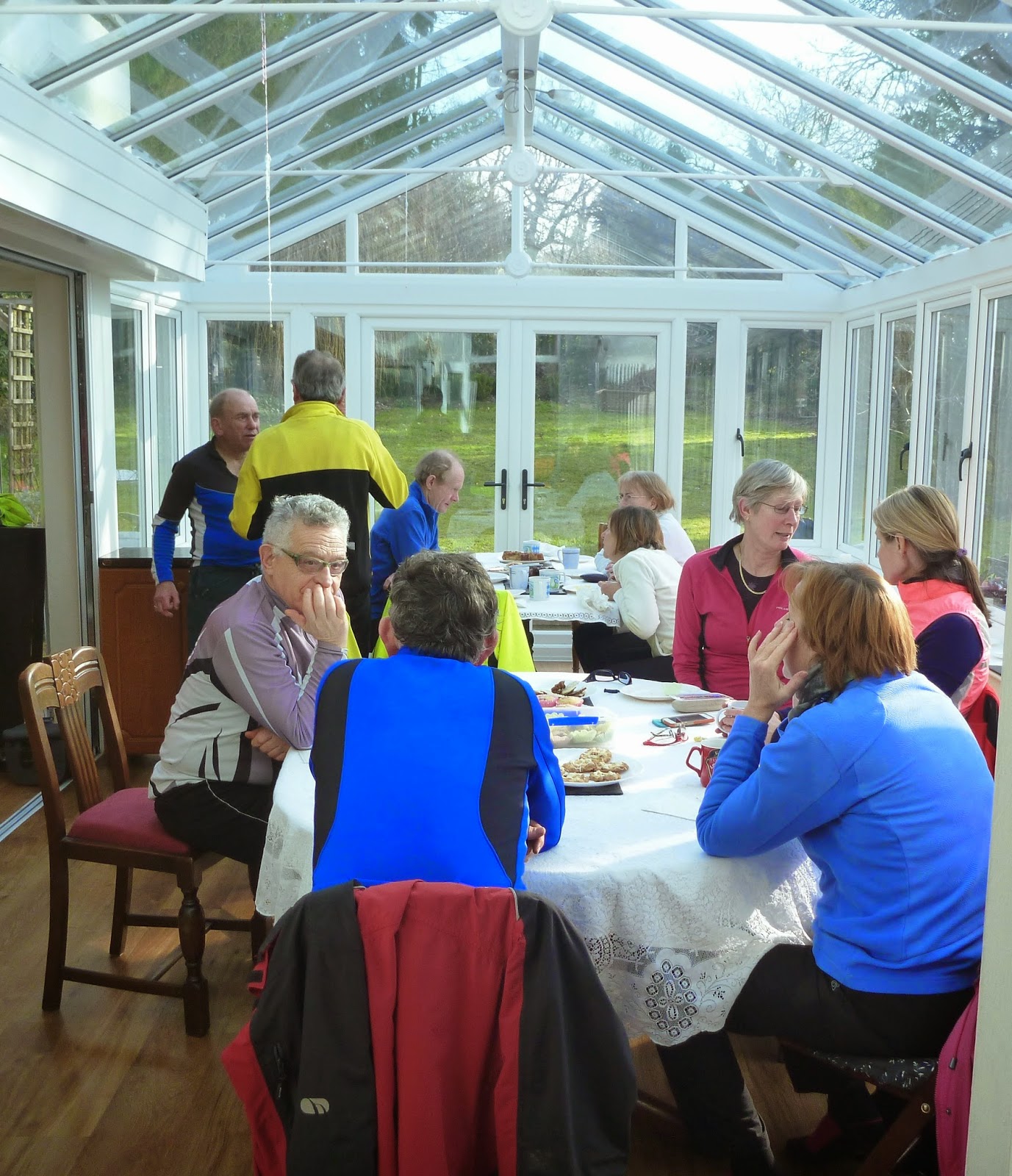 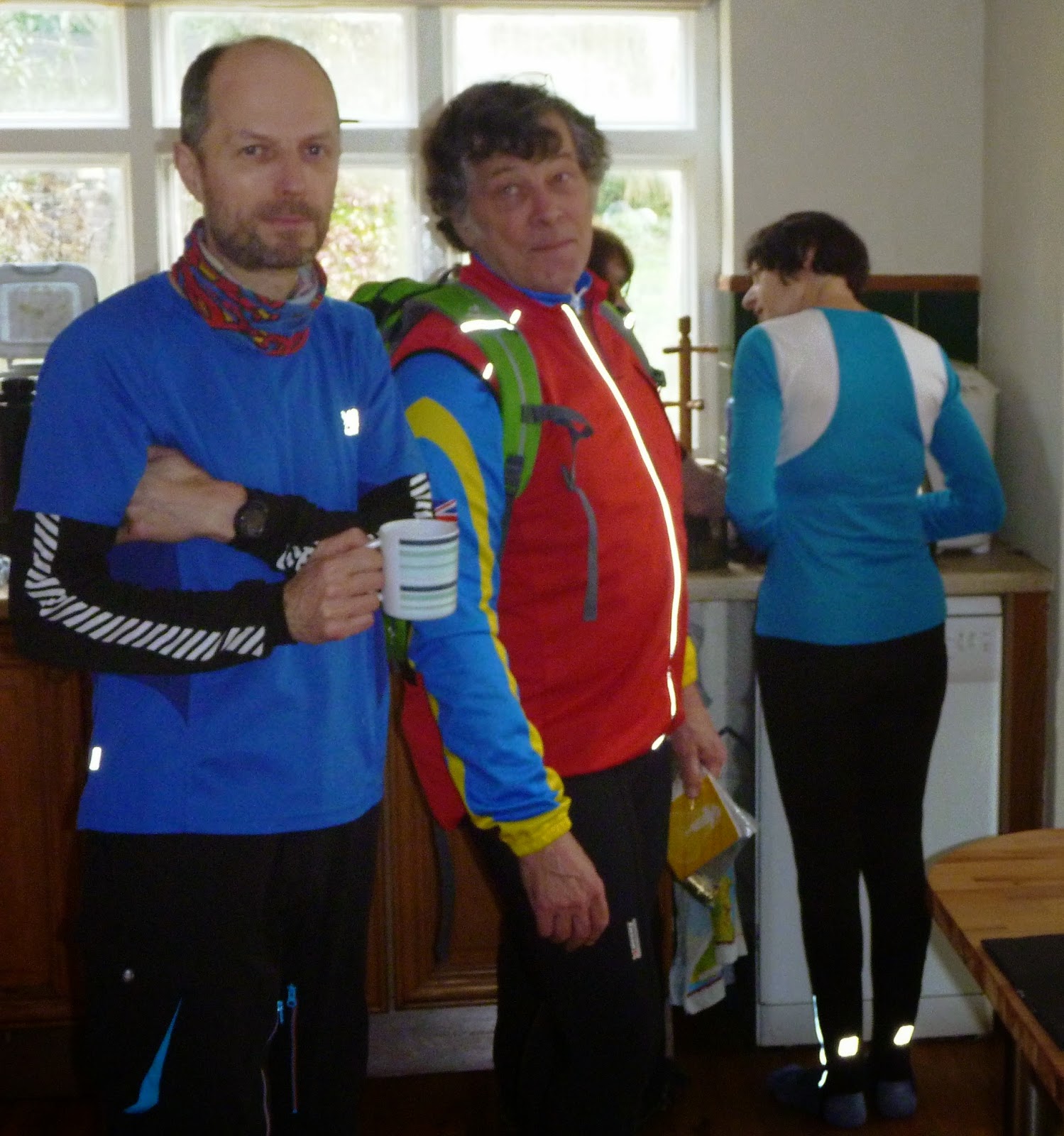 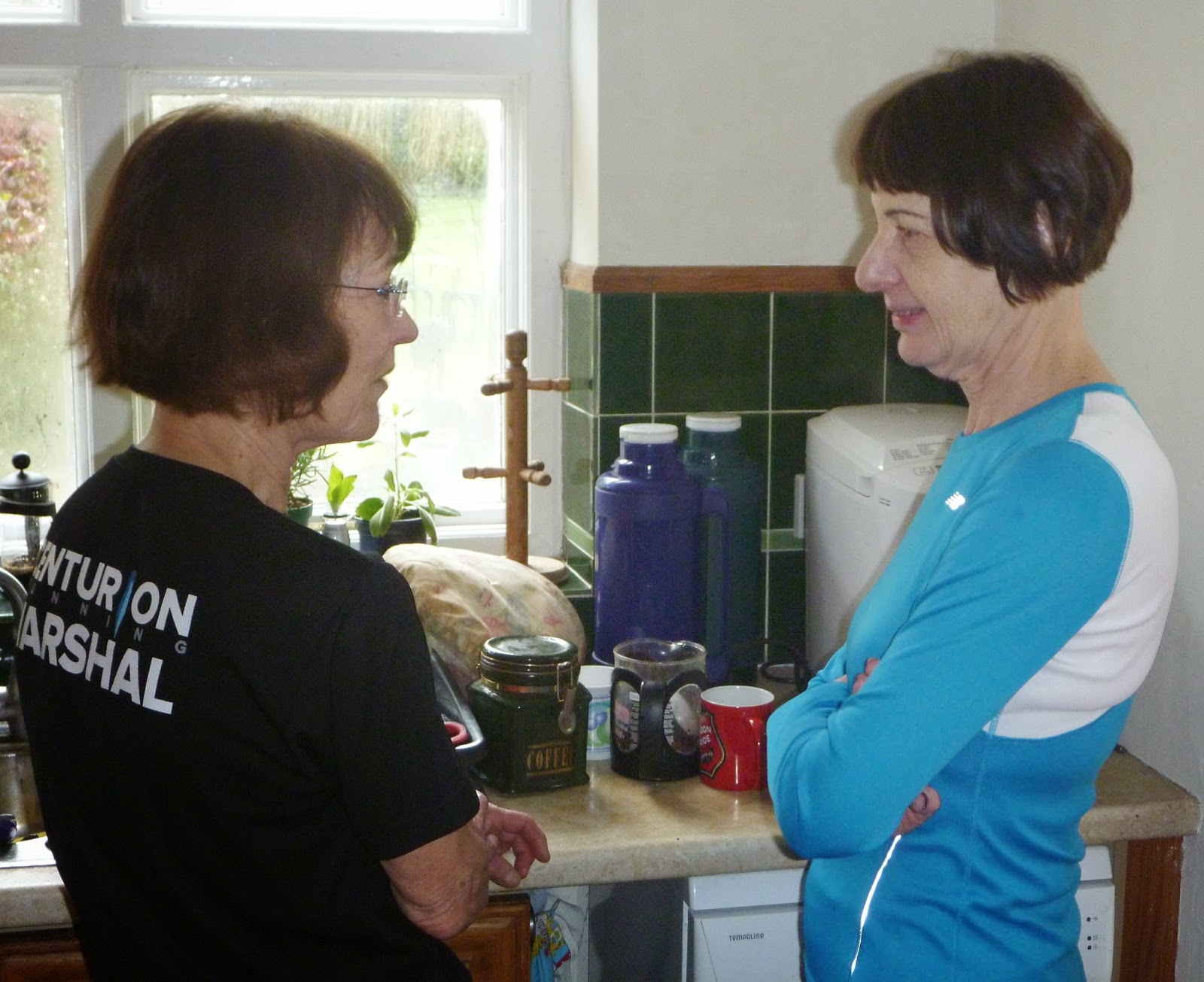 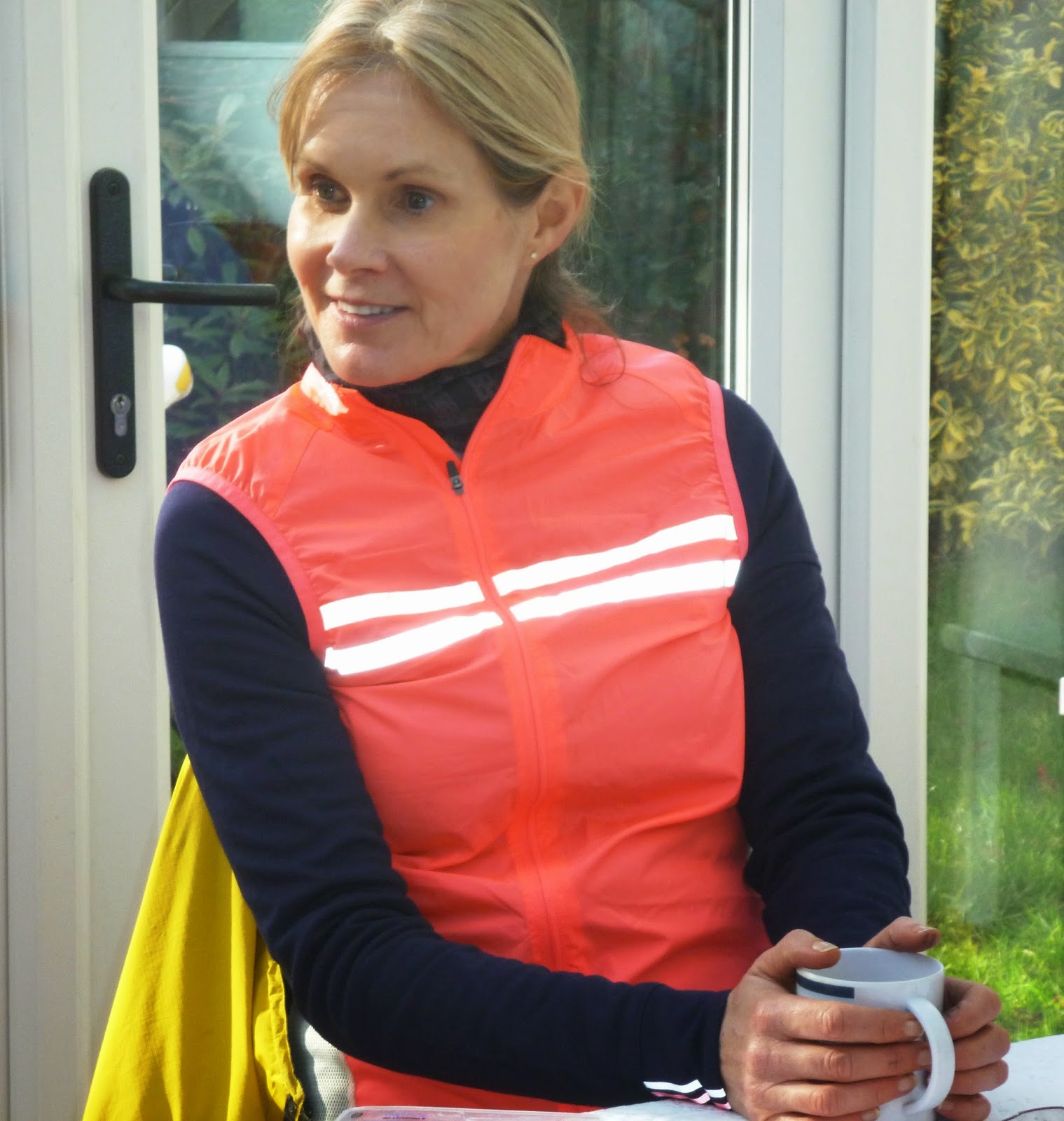 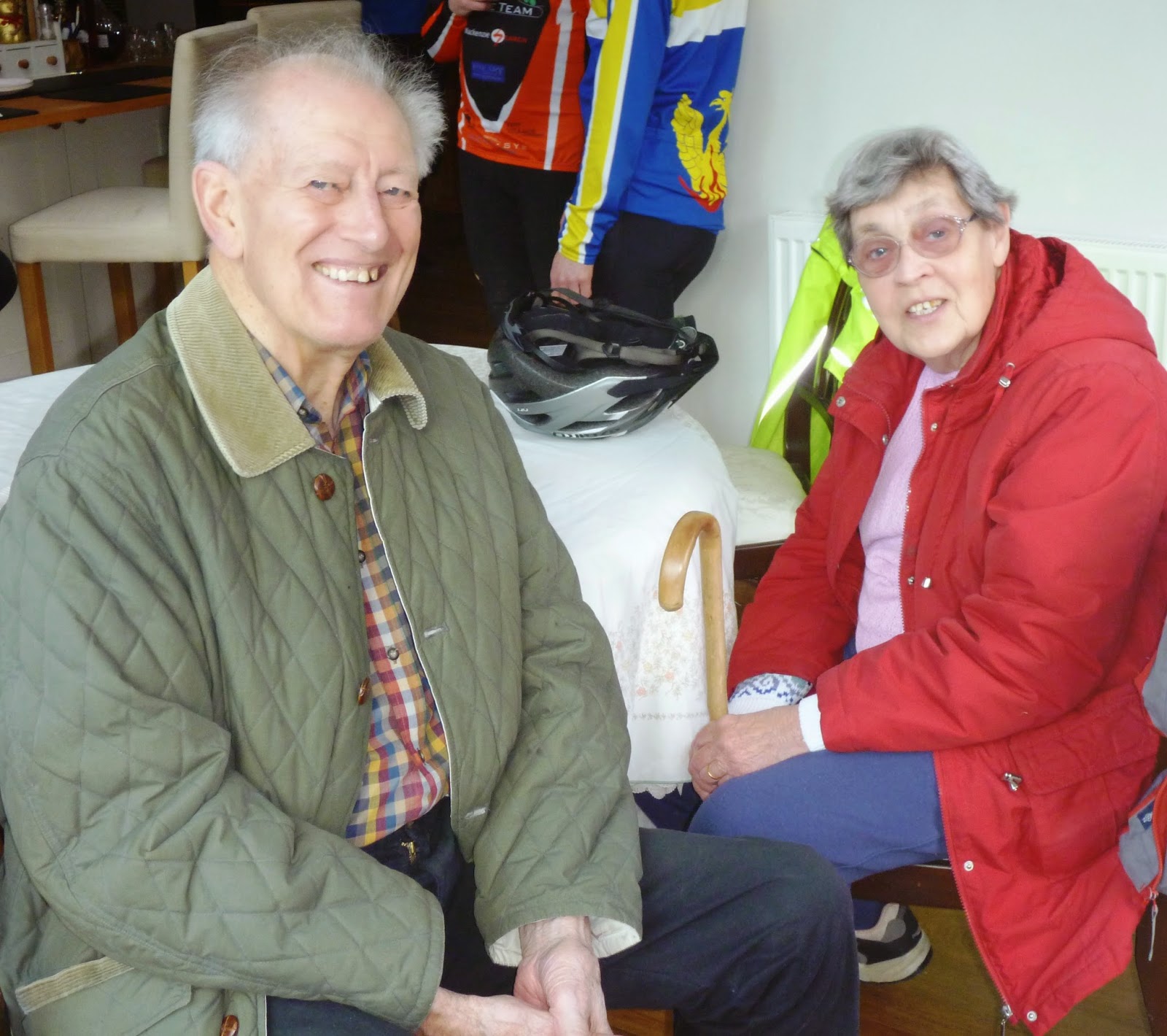 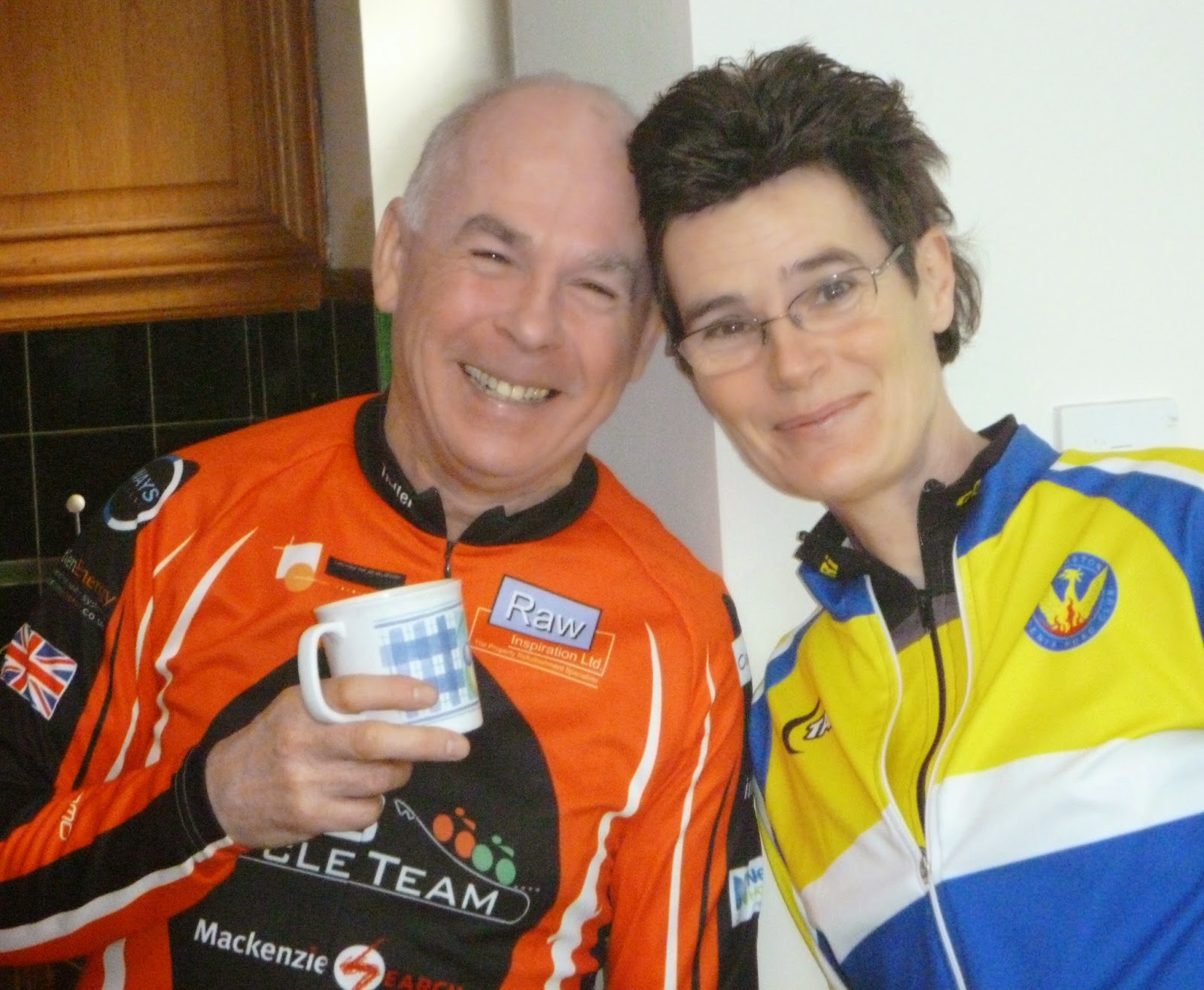 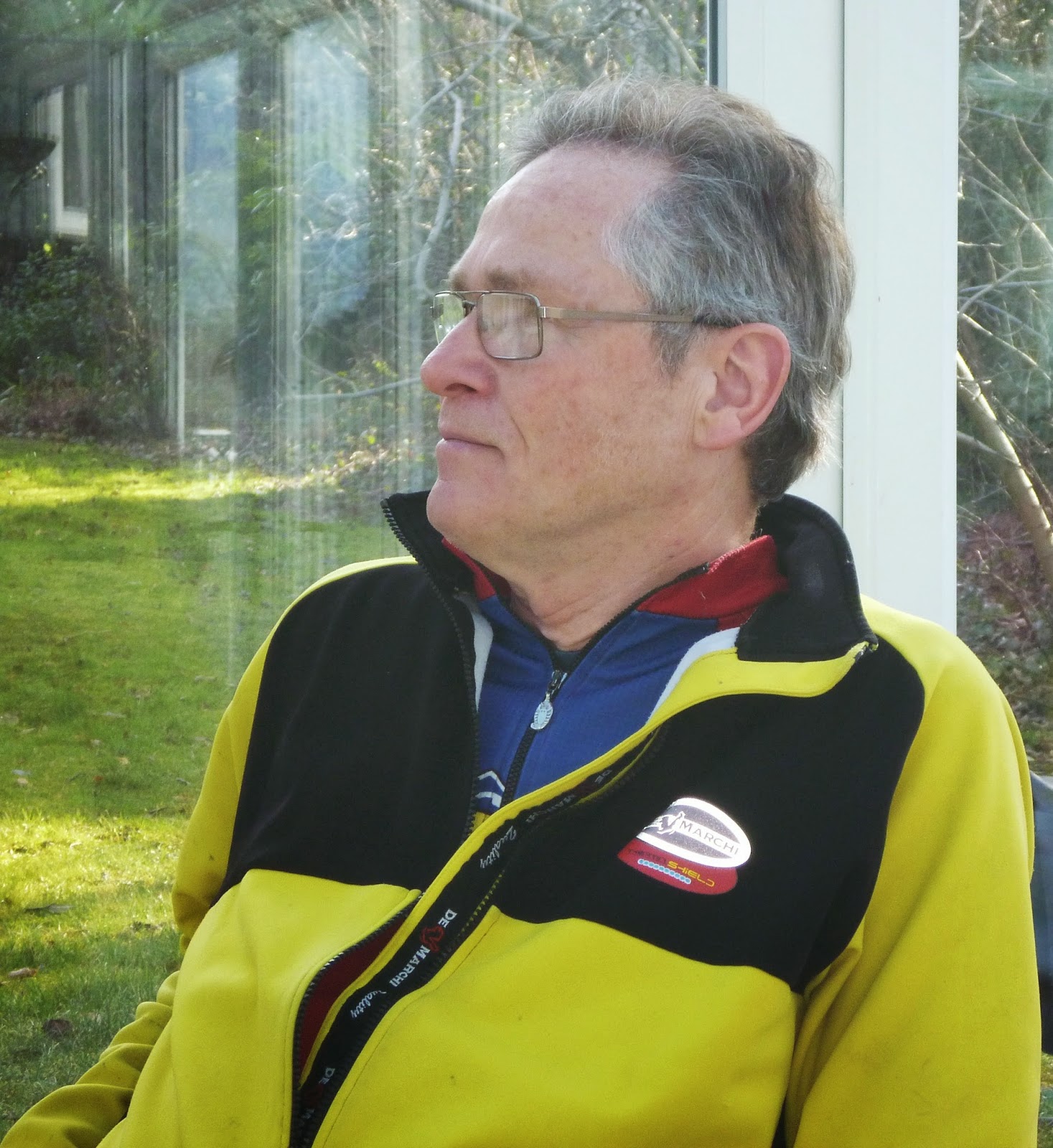 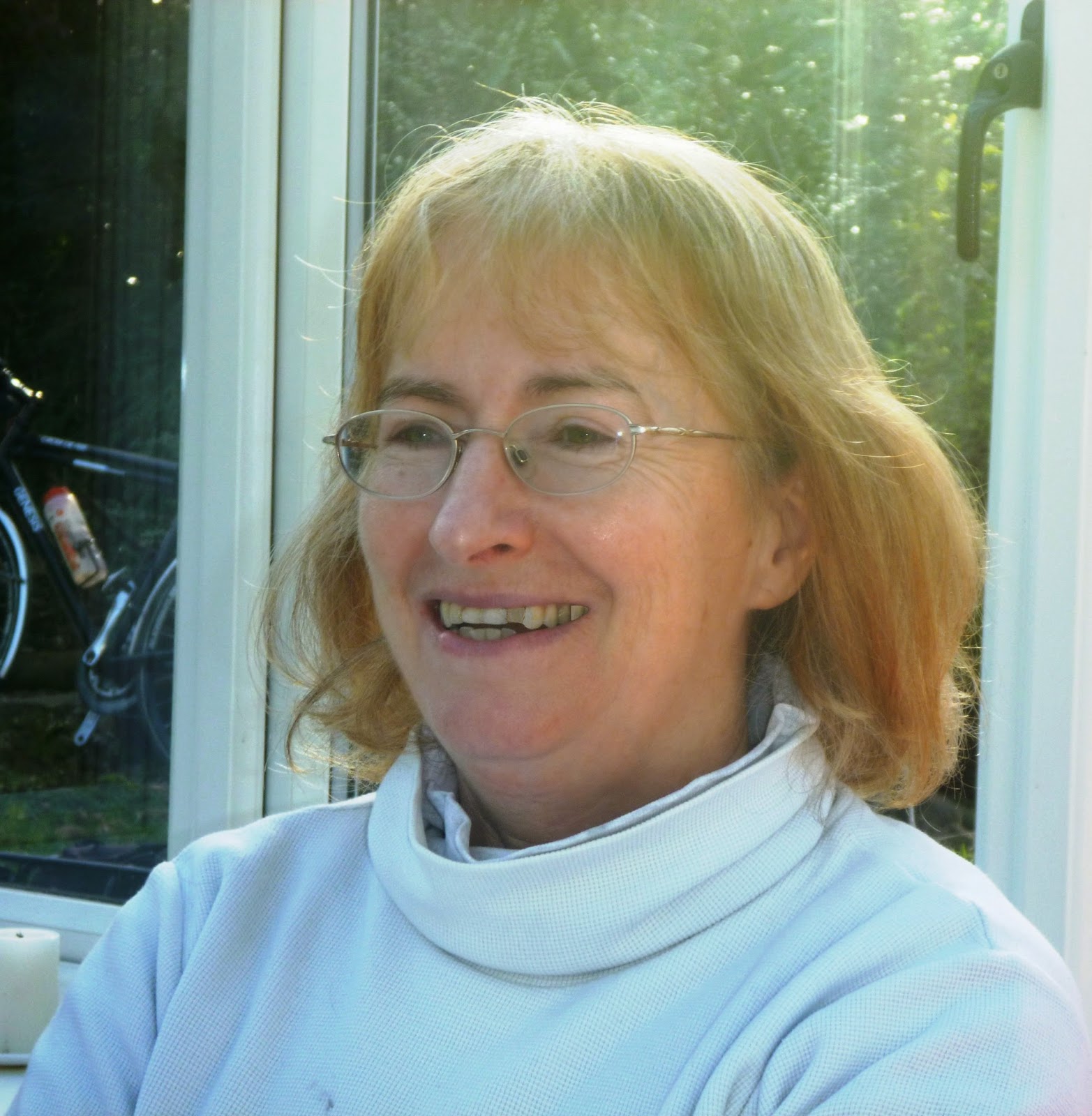 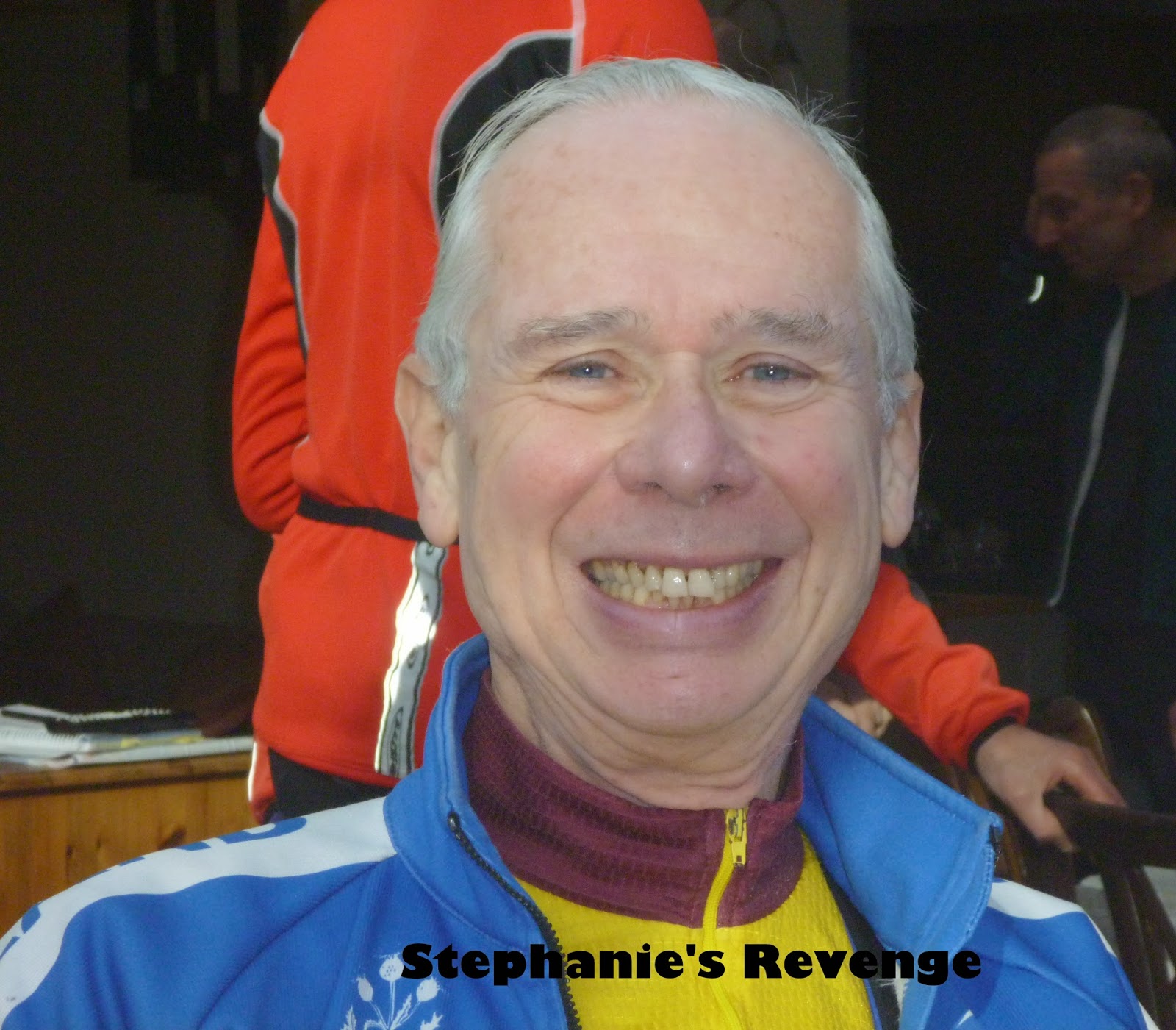 All together at the Angel 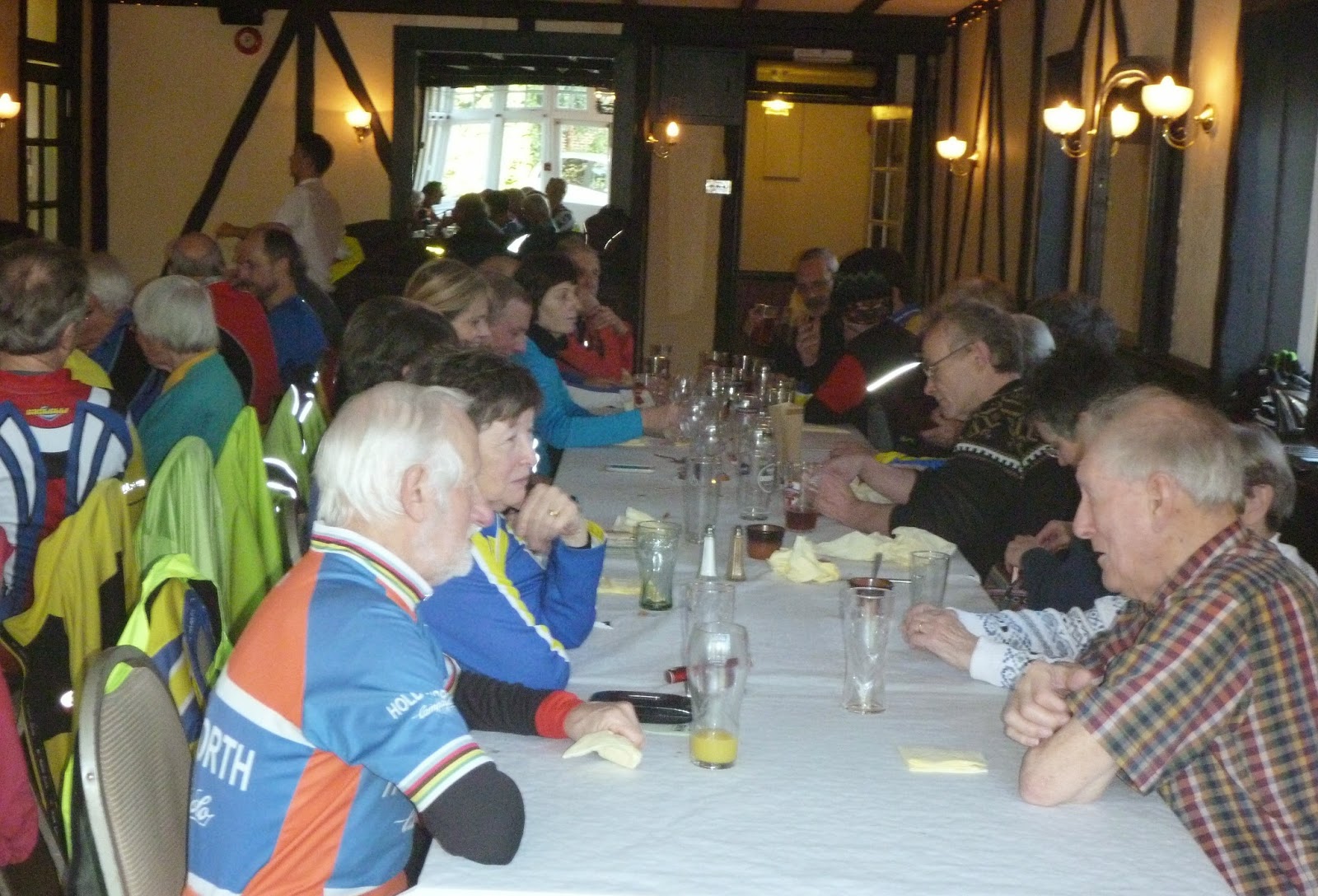 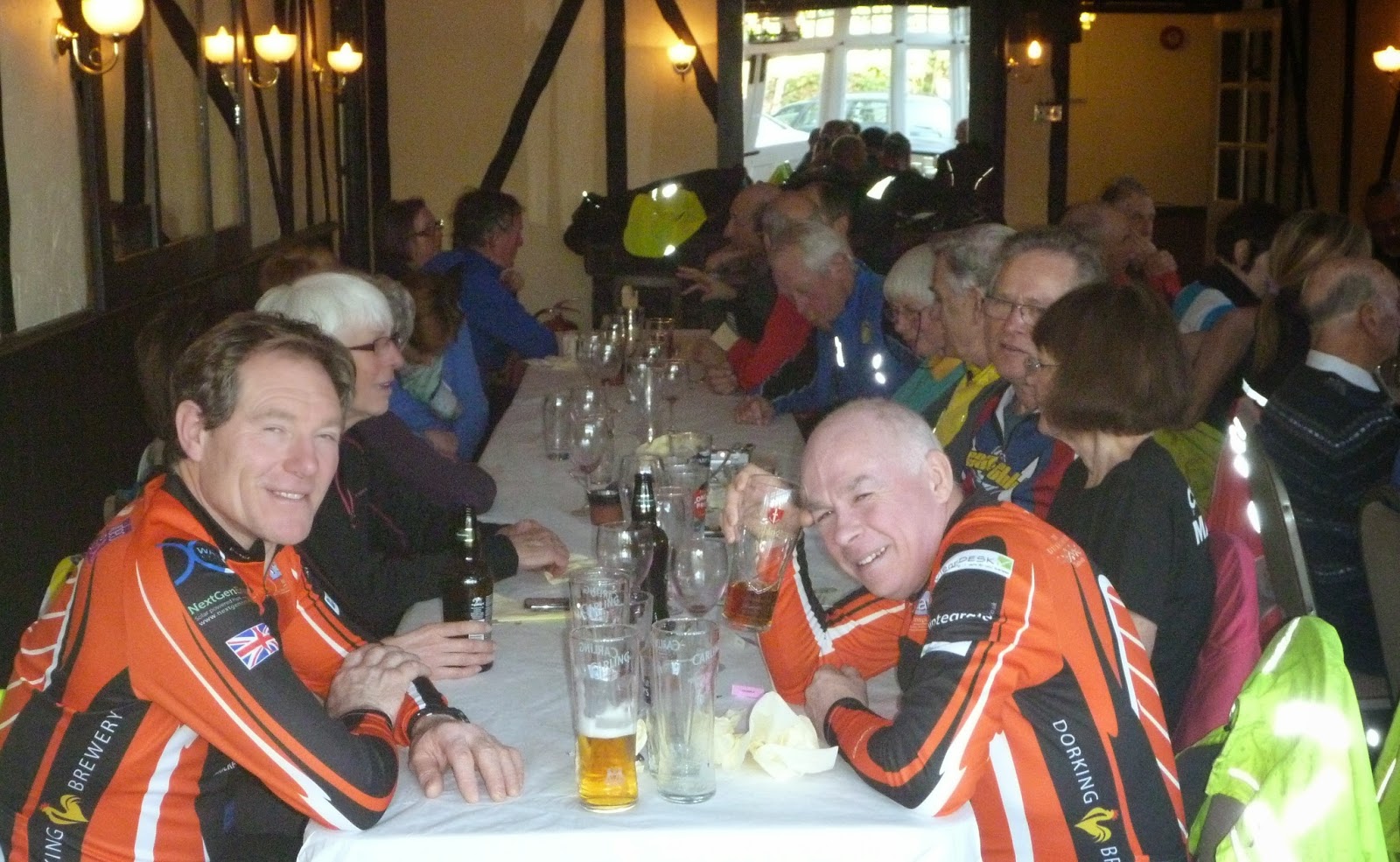 Those TFBs get everywhere!
Our grateful thanks to Steve for leading us on an appetite-sharpening tour of South West London via Richmond Park and Teddington Lock, to a cordon bleu elevenses conjured up by Ann, followed by shared good fellowship at the Angel, organised once again by Steve. Our warm appreciation to Ann, Steve and one and all.
Posted by Jeff at 21:26 No comments: 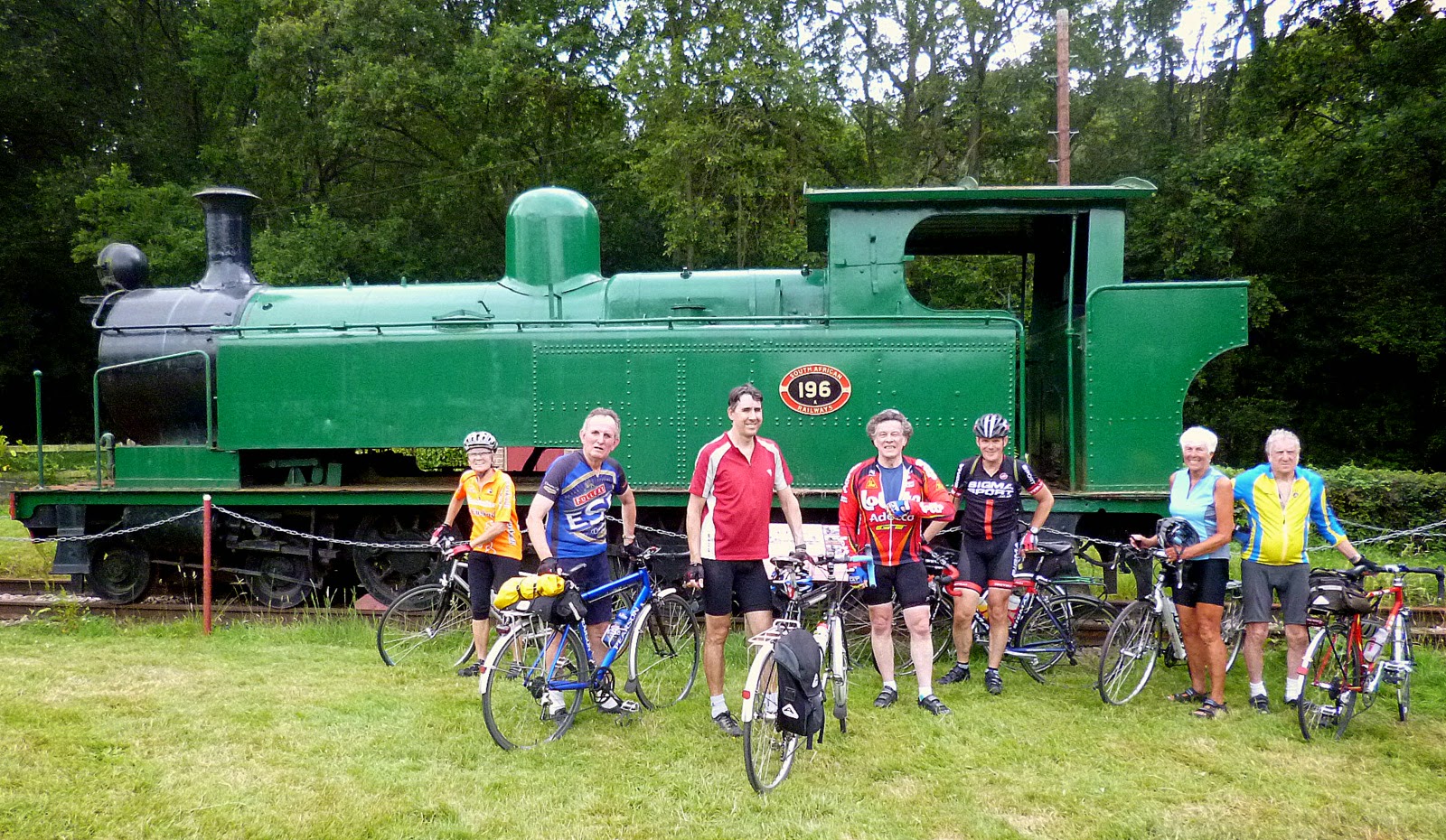 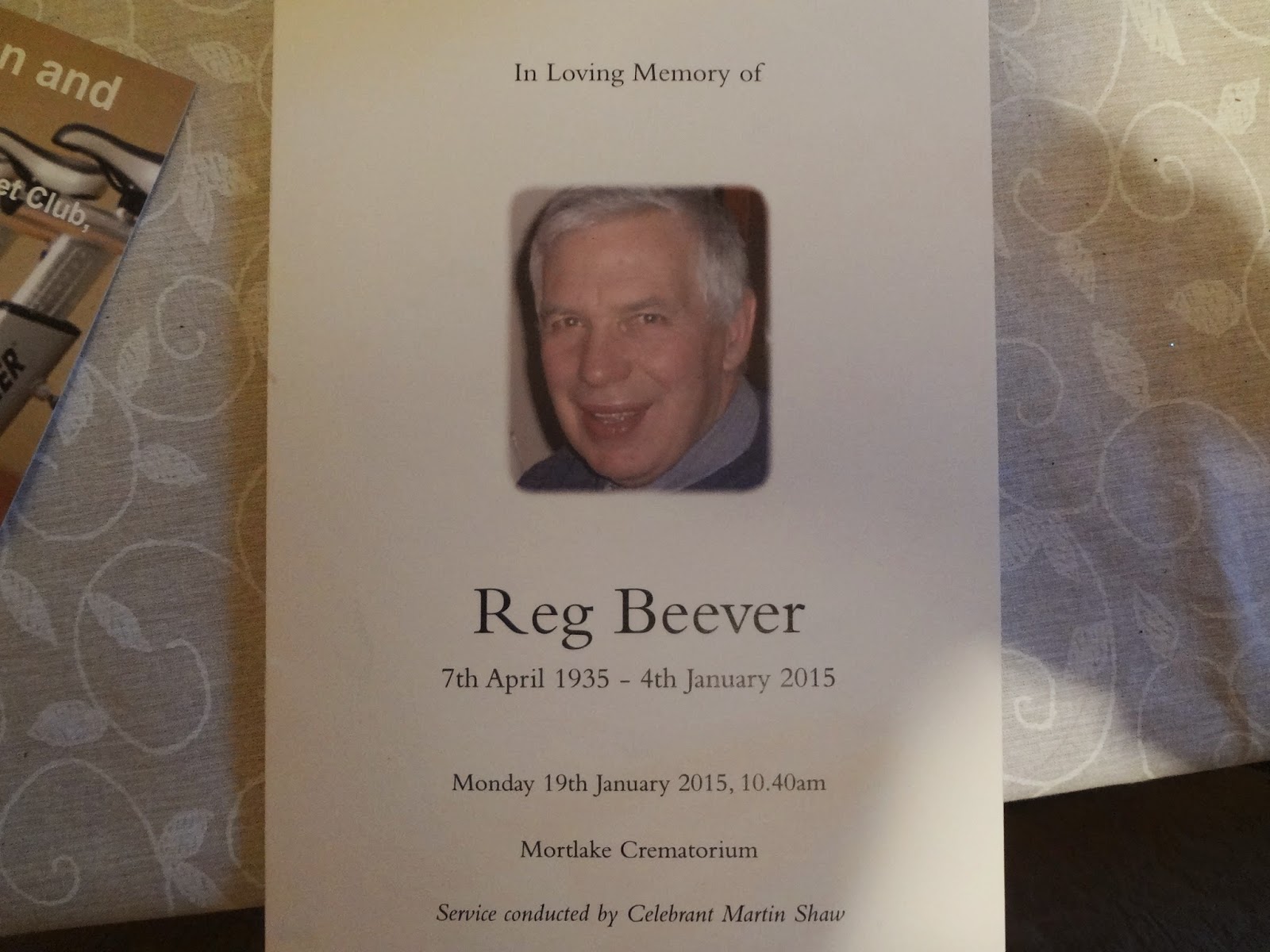 See tribute on MWW Blog. Photo's from order of service. If anyone from C&M would like to post old photo's the family have given permission and will be pleased.
Posted by mike morley at 21:26 No comments: 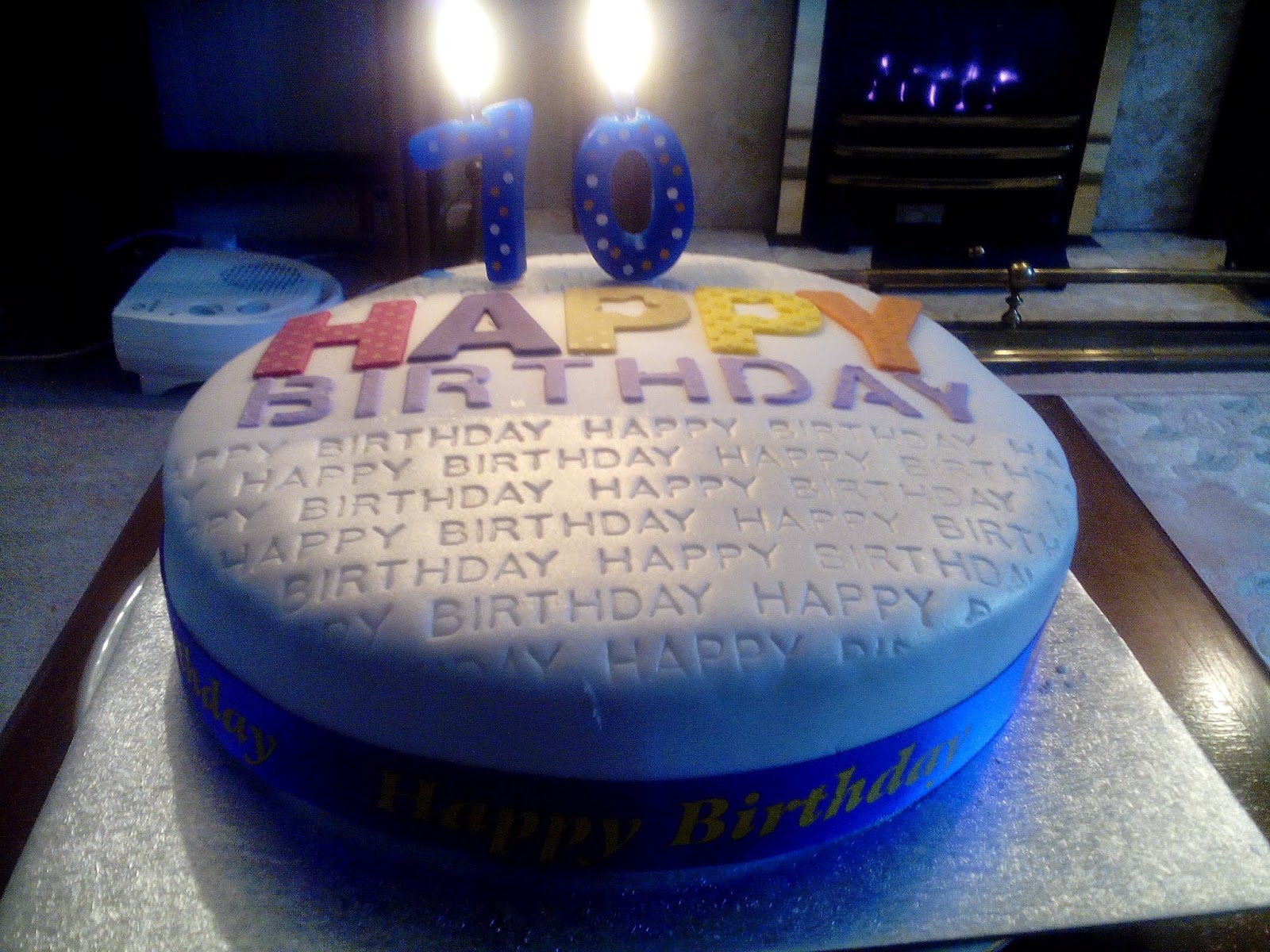 I wasn't born until 2210 hours so today was the right day for my birthday ride. Just on five past nine, a well wrapped-up eight set off from Kingston Bridge. Richmond Park was entered at Ham and exited at Roehampton with nary a hint of ice. Our first mission was to meet up with Irene and Pam at Barnes station. One level crossing was closed but there was still time for cake before eight became ten. We were using NCN4 without most of the uneven, cobbled, pot-holed side roads so beloved of Sustrans engineers. From Hurlingham we past through Chelsea Harbour and along the Embarkment and over Westminster Bridge. Even with three earlier arrivals, there was room inside for all of us in Bill's Cafe though we were requested to be on our way by eleven!

Dour and drab miles go us to Greenwich for a gentle trundle past the Cutty Sark and old naval colleges and onto the narrow Thames Path. It couldn't have been a profitable day (queue of two!) for the Emirates Cable Car so our flight departed on time at 1215 hours. It was enlivened by a violent sway and a stall but after two minutes a spectral voice assured us this was quite normal. The mileage through Canning Town and Plaistow was mercifully short before we turned west onto the Greenway (or more properly the Northern Sewer Outfall). We ignored East London cemetery as "Dixon Of Dock Green" is the most famous person buried here but we did pause at Abbeys Mills, perhaps the major reminder of Bazalgette's contribution to London. We were now experiencing a keen northerly wind and the centrally heated Olympic Park toilets proved to be popular. Most dined in the Mittel Orbit cafe while Neil went in search of the velodrome. Just before his return, our trencherman squeezed a pudding and a second drink.

We continued along the Greenway to its end in Wick Lane before crossing a near deserted (was it really that cold!) Victoria Park. Four traffic-clogged miles saw us to the final stop, the crowded Look Mum No Hands in Old Street. Smithfield and Blackfriars Bridge returned us to Waterloo. By now numbers were dwindling and I led a rump to Victoria Station before rejoining the outward route. Pam, Irene and Tony departed just after the Marc Bolan memorial, and I said my final goodbyes to Paul and Ed at Kingston Gate. Call it 40+ miles.


A first contribution to the blog from Ed methinks! 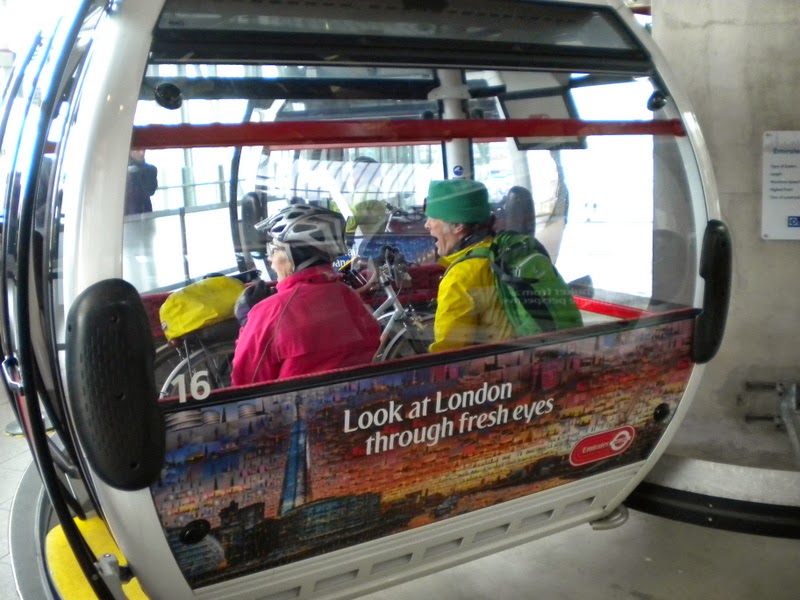 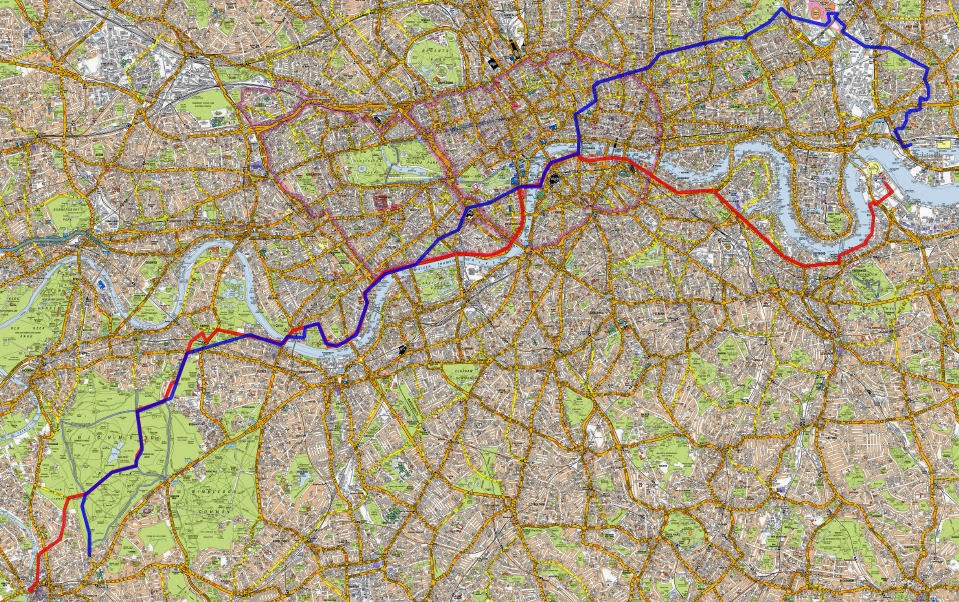 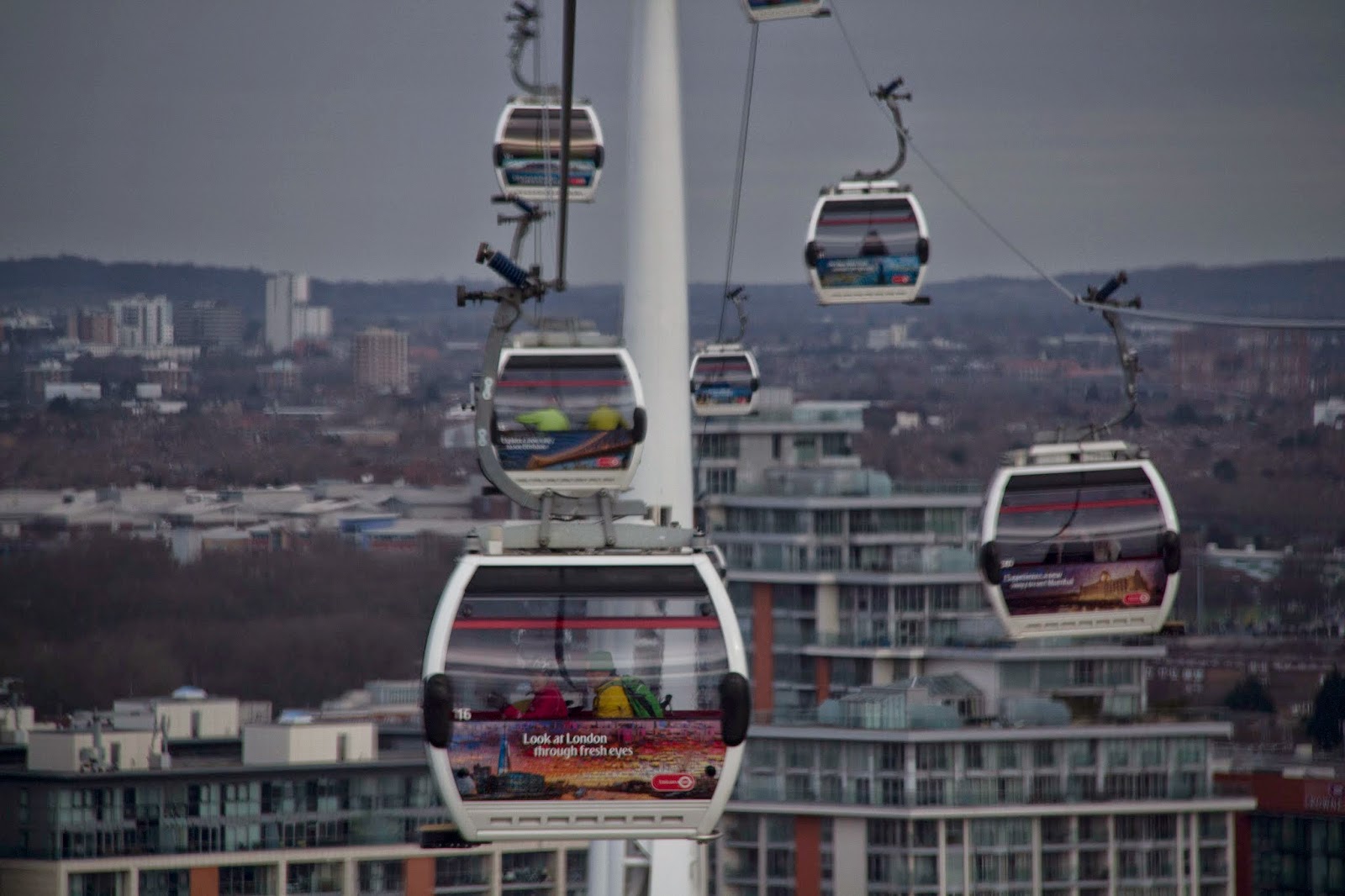 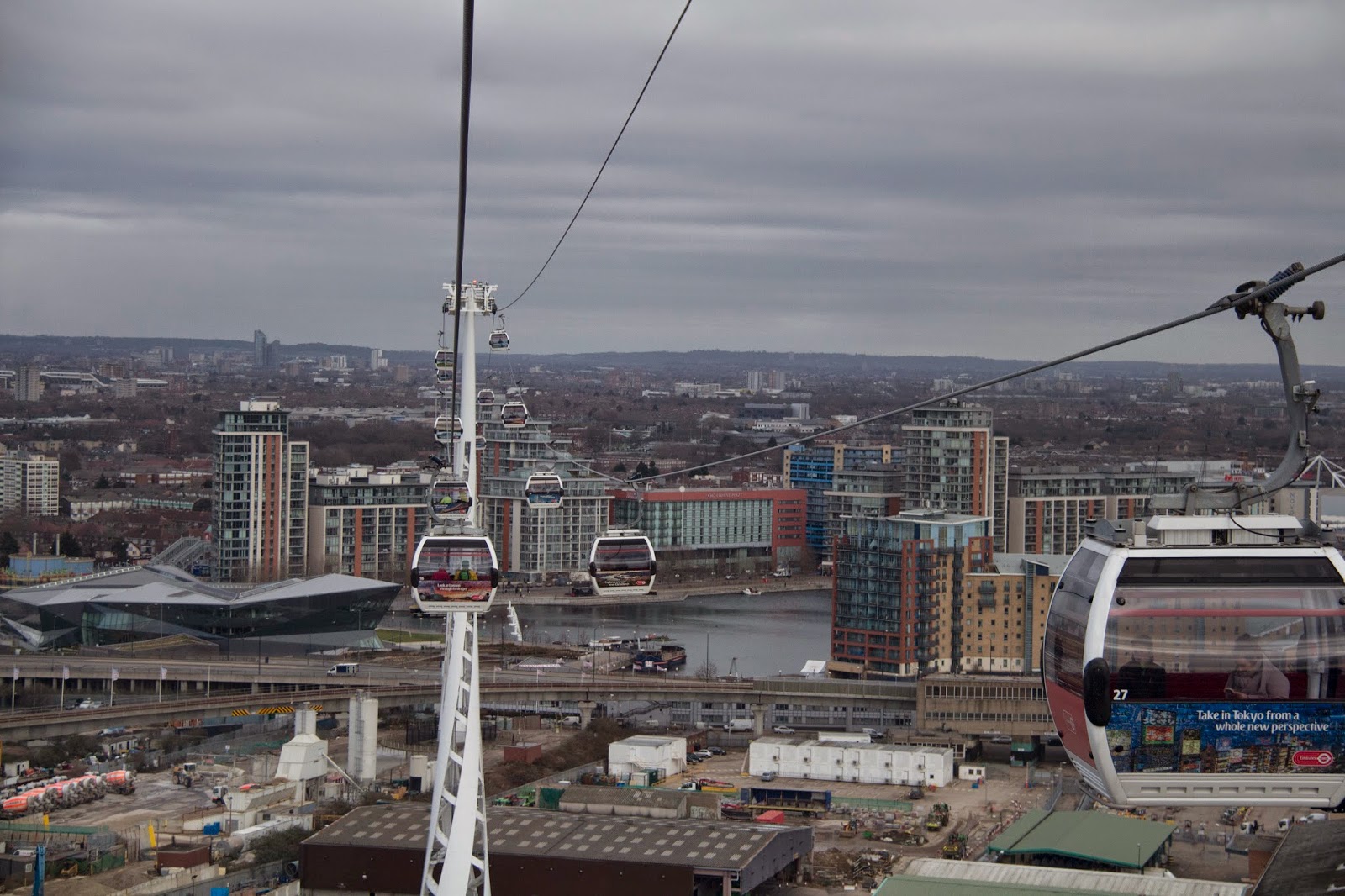 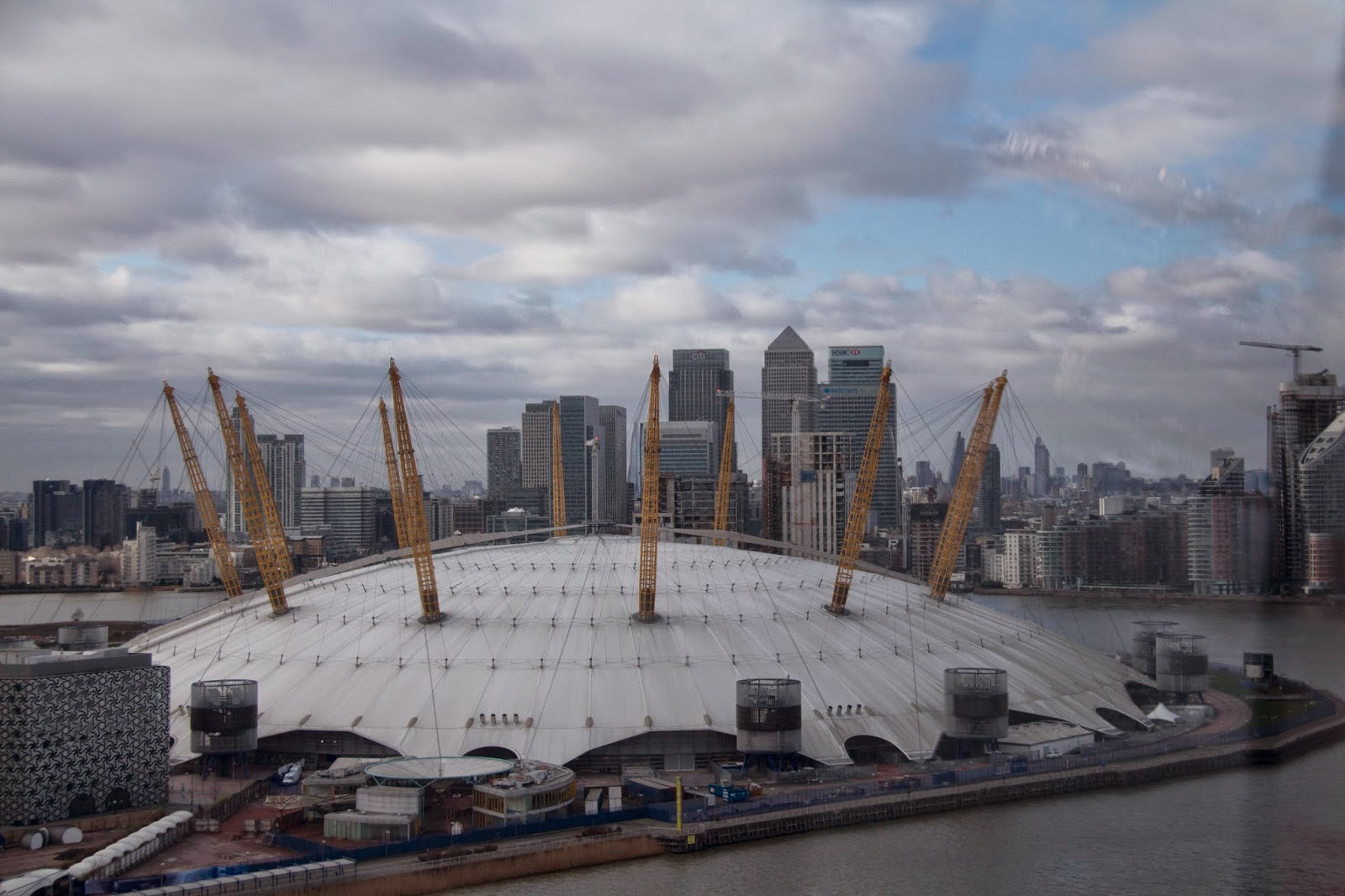 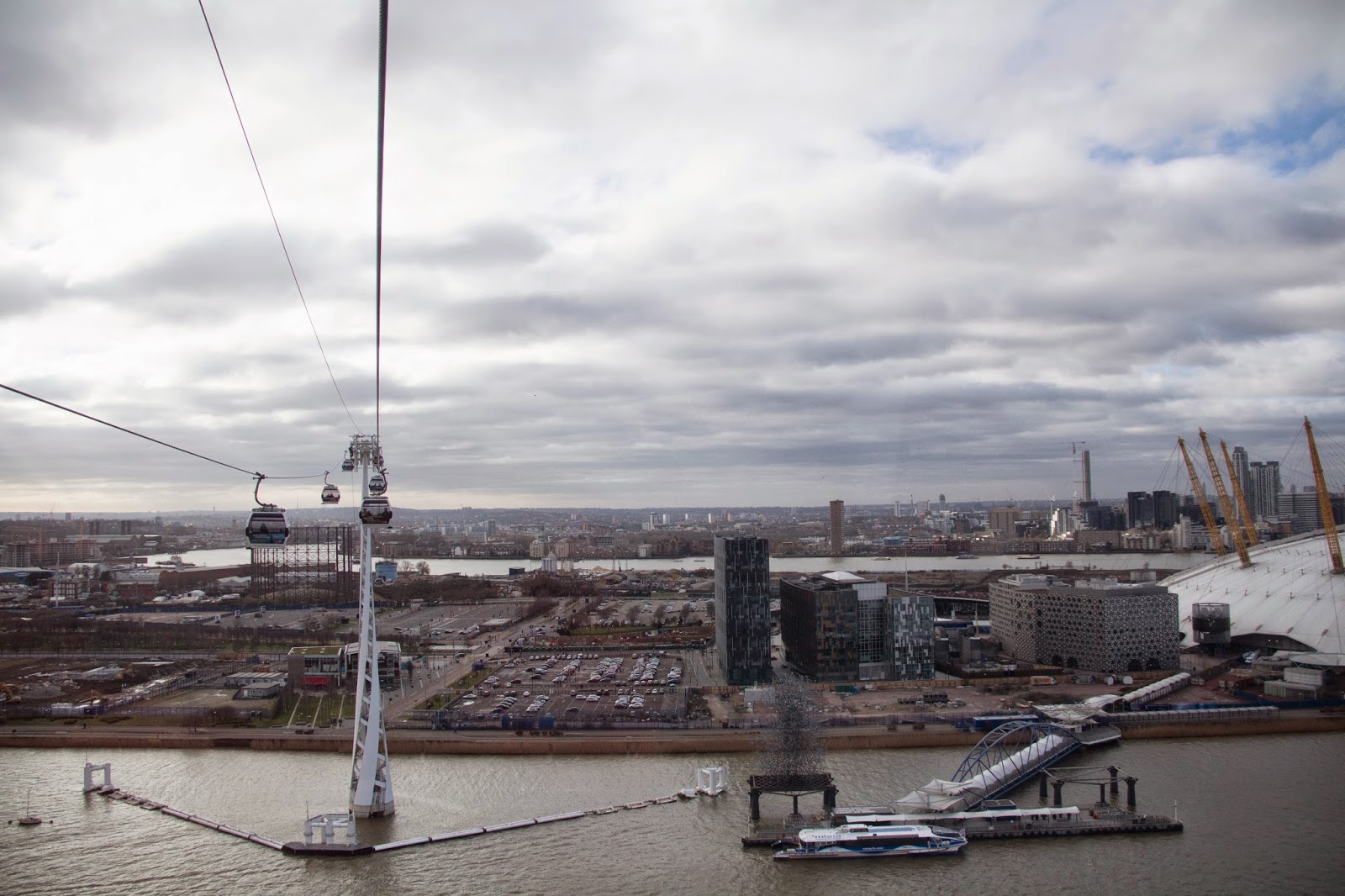 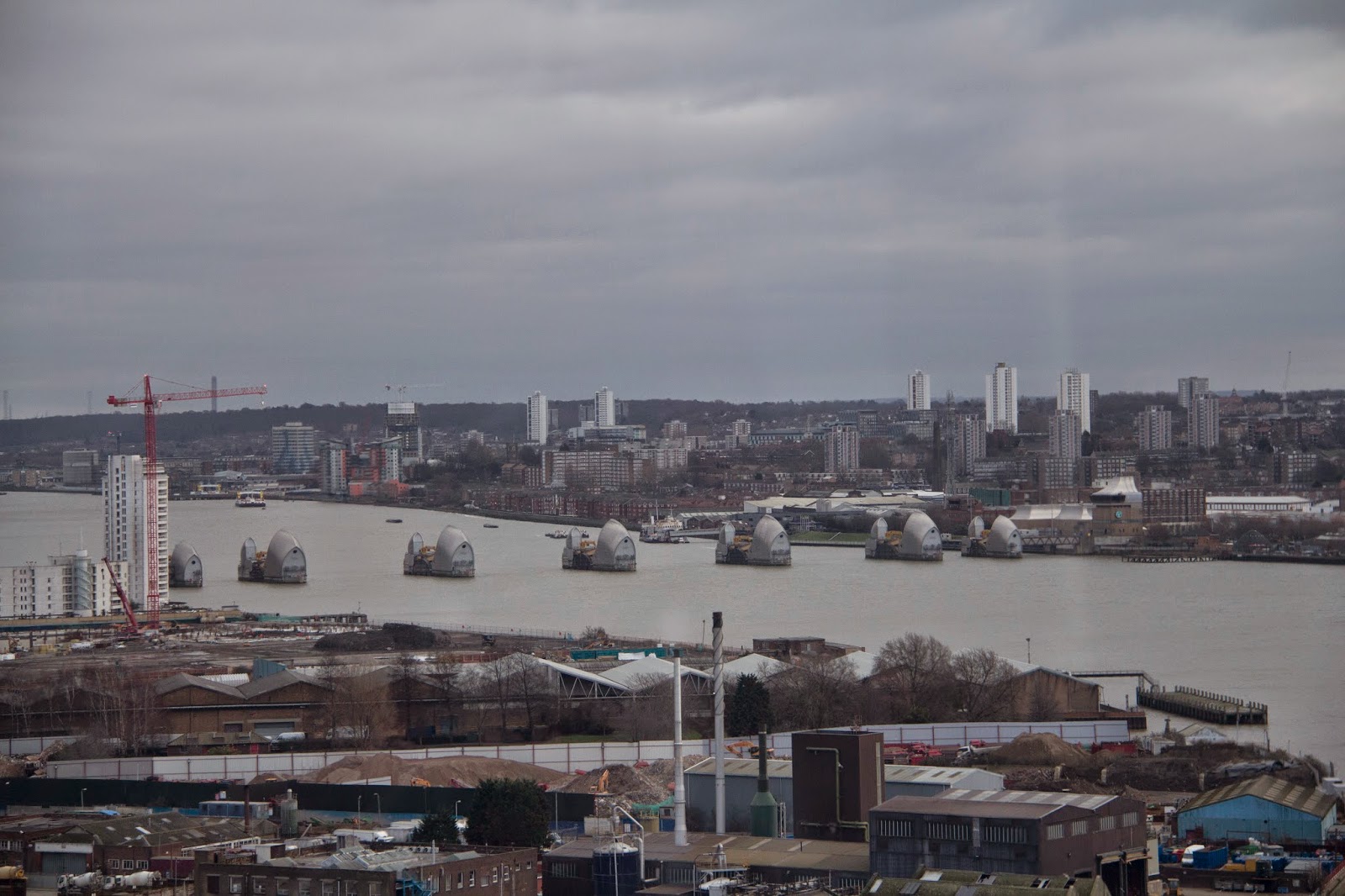 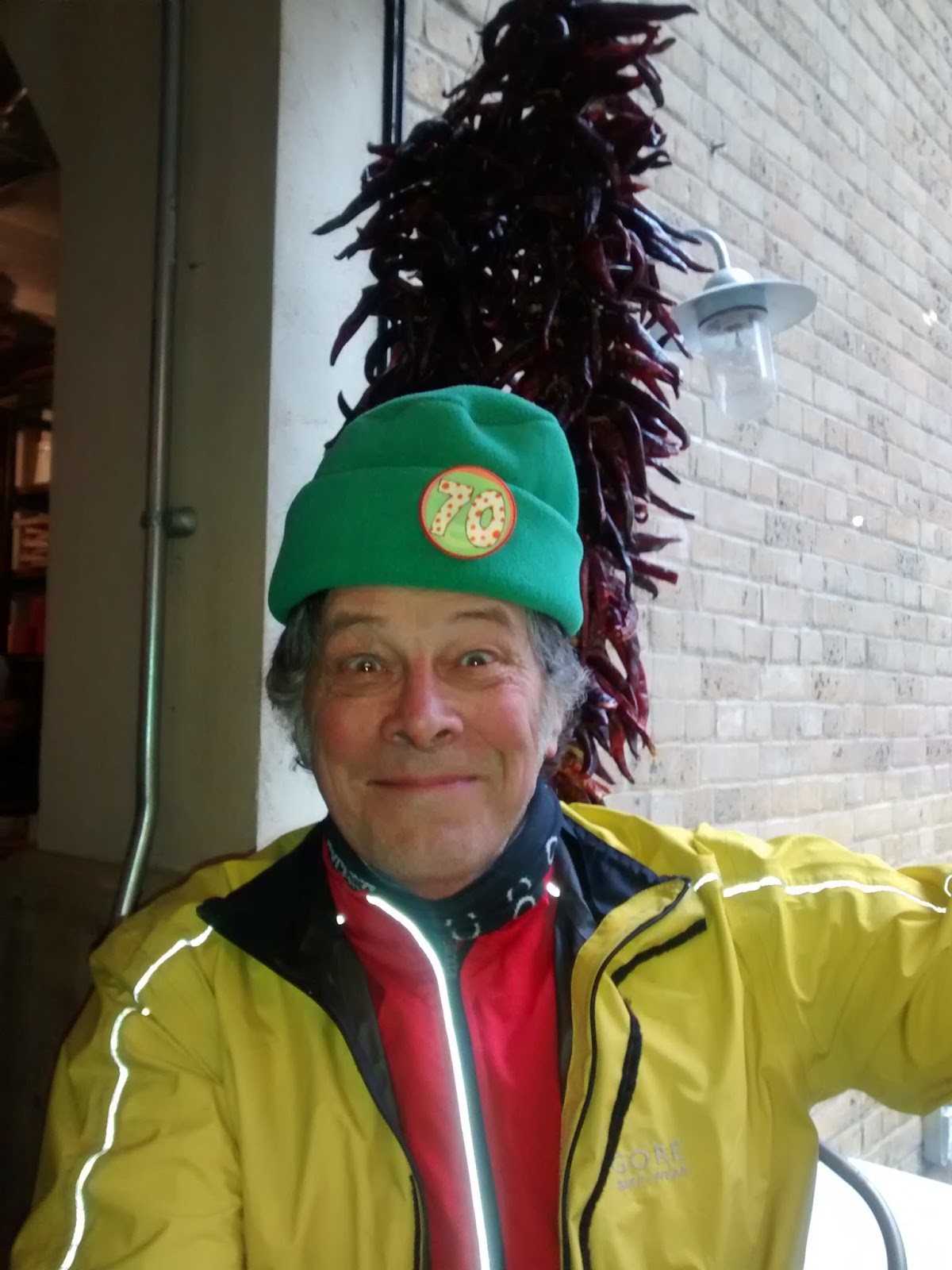 Our Leader the Birthday Boy 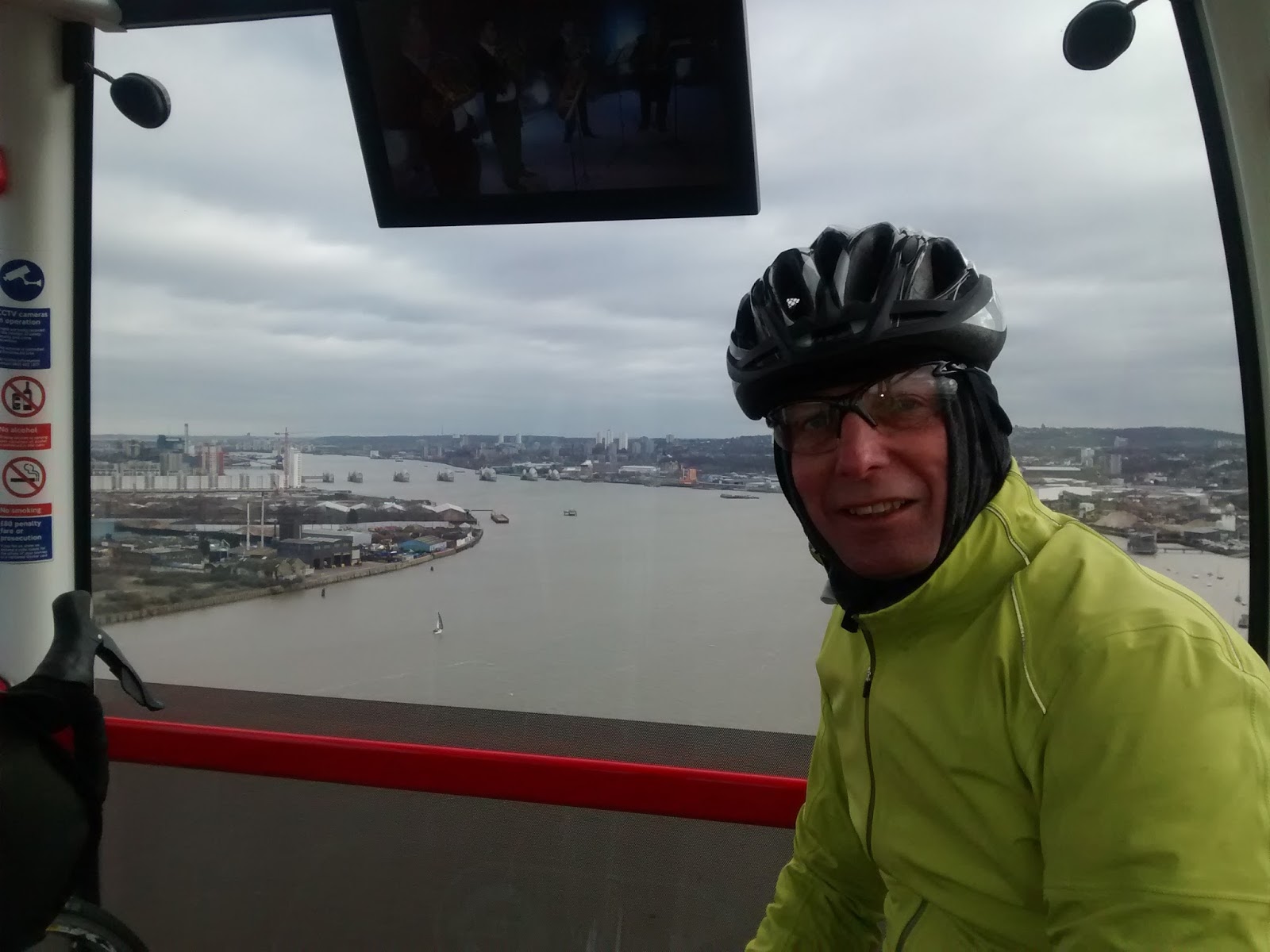 A View from the Cable Car