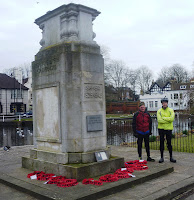 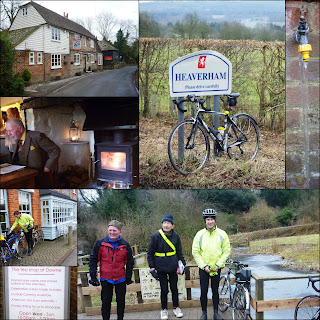 Assembly point Carshalton Ponds, so it must be Kent. The ponds were not frozen, so it can’t have been too cold. However, the cocktail of Kent and a north-easterly wind chill deterred all but the most determined. Richard thus had two penitent Canterbury pilgrims to follow his lead and chastise the flesh.

Within a few hundred yards, Richard had abandoned the main road and wove an intricate route through parks, cycle tracks and quiet roads to the sleepy hamlet that is Croydon. We then rejoined the combustion engine through West Wickham and Jackass Lane to our coffee stop at High Elms, with Richard reluctantly escorted away from the Golf Club to the Country Park, where Bob awaited us. The pond was frozen over, but the smiles from staff were warm and welcoming. After a natter with Bob we set off to embrace some Kentish hillocks and occasional flurries of snow via Shoreham, Otford and Kemsing to the modest yet impressive 15 century Chequers Inn at Heaverham.

Outside, the dripping tap was a three foot icicle; inside were roaring log fires, briefly steamed up spectacles and a warm welcome. No sooner had we settled than I was approached by an elderly stranger, asking if I were Graham Hill. It seems he has been in contact with our Secretary and is keen to join us. However, at present he lacks a bicycle. He had come from Wandsworth, I am not sure whether by car or train. On the hour we departed and passed through Otford and Twitton, where Richard introduced us to a novel route partly along an abandoned road to the top of Polhill. After Knockholt Pound, our leader found another couple of chevrons to keep us warm before tea and bread pudding in Downe.

Then it was all downhill, well nearly, to West Wickham where we said farewell to our leader and made our way home in fading light, with for me some 60 miles on the clock and for Paul I would think quite a few more. Our thanks to Richard for a bracing day on the bike! 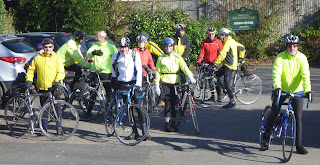 Before the route departs our collective memories...

This was easily the best Sunday of the year though it started chilly. That was soon rectified as Dave set off at a spirited pace. So it was Hampton Court, Hersham, Walton and along Walton Lane after an updated view of the bridge. From Addlestone a long climb to Longcross and beyond led onto a gentle descent into Windlesham and finally to Notcutts, Bagshot.

Most of the assembled dozen ground a way up the A30 to the Jolly Farmer (as was) where thankfully we parted left. Plunging into terra incognita for me, Heatherside, we were not long among sylvan surroundings before a familiar landmark appeared  - the home of darts, Lakeside. A change of venue meant we reached the Old Wheatsheaf Frimley just after twelve! Despite soup cold and salty, we dined alfresco; in time to be joined by three laggards.

The way back was via Pirbright, West End, Burrowhill and Ottershaw for a leisurely tea in Cafe 2 Addlestone - around 55 miles door-to-door.

Posted by Anonymous at 10:24 No comments: 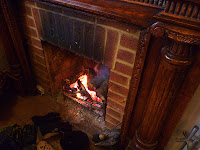 The highlight of the ride was the log fire, well tended by the landlord of The Gate, though still not able to dry out some sodden gloves. Reluctantly abandoning the hearth, we don oilskins before taking to the waters to head for home.
Posted by Jeff at 10:46 No comments:


Had I been less responsible I might have stayed in bed for the rain it was relentless. So it was something of a surprise that we numbered eight at Bocketts - in truth seven as Dave was headed home. Our outward route went via Gadbrook Lane, Norwood Hill (where Richard call it a day) and Charlwood. Prestwood Lane is demonstrably not a priority for West Sussex's highway department. Soon we were huddling beside an open fire in the Gate with all clothing which could be decently removed steaming gently on the available radiators.

With dipping temperatures the unanimous vote was for home so after Parkgate and Pixham Lane we went our various ways. No cars at the stepping stones, no bikes at Rykas so perhaps no surprise when the A24 cycle path bow waves went over the tops of my boots. It could have been worse; snow flurries as I climbed into bed.

Posted by Anonymous at 07:00 No comments:


A Few Words of Thanks


Steve celebrated his return to Blighty the previous evening by leading a chain gang from North Cheam around Richmond Park, before taking them to his home for Ann to take over the baton and offer coffee, cake and tasty morsels, accompanied with a splendid variety of home made juniper and vodka  cocktails to warm the cockles and sharpen the appetite. 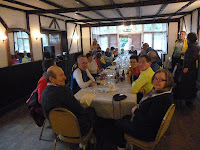 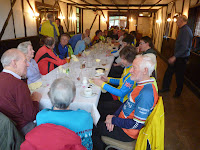 With our cheeks flushed and our speech already slightly slurred, the cycling congregation was gently shepherded to the venue for our Sunday Service at the altar of the Angel, Long Ditton. Early arrivals were already occupying pews in the Saloon Bar, while the new arrivals soon sought out the Doom Bar. Shirley Quemby entertained us with some fascinating Patterson prints and images of the Angel and its history. All too soon it seemed, we were summoned to table to be smilingly served an excellent lunch, which was hopefully enjoyed by all. I heard no complaint. We must thank Steve for organising this annual beanfeast, and all the staff of the Angel for serving us so well. It was all over so soon that I am already impatient for next year. Steve, you have got the job!