With showers forecast all day, merely four started from the appointed Leatherhead Wetherspoons.  However, the apparently long-unfrequented elevenses venue at Rusper Golf Club gathered others from far-afield: Dave from an overnight stop in Horsham to assist with an Addiscombe time trial, Graham and visiting CTC rider Rachel from near Heathrow and Ray from Fetcham.  We commiserate with others who may have been Majorca-bound or otherwise indisposed.
Whilst Grant and Ray returned to domestic duties, the remaining seven headed for Ifield and Crawley via Partridge then Orltons Ln, with pleasant views and road surfaces on The Mount and Prestwood Ln, only for the maiden leader’s voyage to start inexpertly by losing back-marker Graham and Rachel at only the second turn!  Five pressed on via the somewhat tricky route around the edge of Crawley, passing through Langley Green, Martyr’s Ave and the Manor Royal industrial area then NCR 21 to negotiate past the Snooty Fox at Three Bridges, before turning up Crawley Lane to Pound Hill and thence up the gradual climb of Turners Hill Road.  Not to worry about the two departees: the Warden’s gazetteer-like knowledge allowed him to arrive just before the main group at the lunch stop of The Red Lion at Turner’s Hill (having gone via Charlwood and Horley)!  A hearty lunch was consumed, including various Harvey's  brews (Mild, Porter, 1040 Best) at a fortunately spare table (phoning before was advised but omitted).

We rode the return leg with a light tailwind via the pleasant Effingham, Broadbridge,  Hathersham and Axes Lanes to Salfords and Lonesome Lane to tea at another GC -- this time Reigate Garden Centre.  On what turned out to be a better day than forecast with only brief and light showers, a modest 55 miles of varied scenery door-to-door may not have used up the calorie intake but perhaps did so for those London-bound….?  A couple of useful leader's lessons learned. 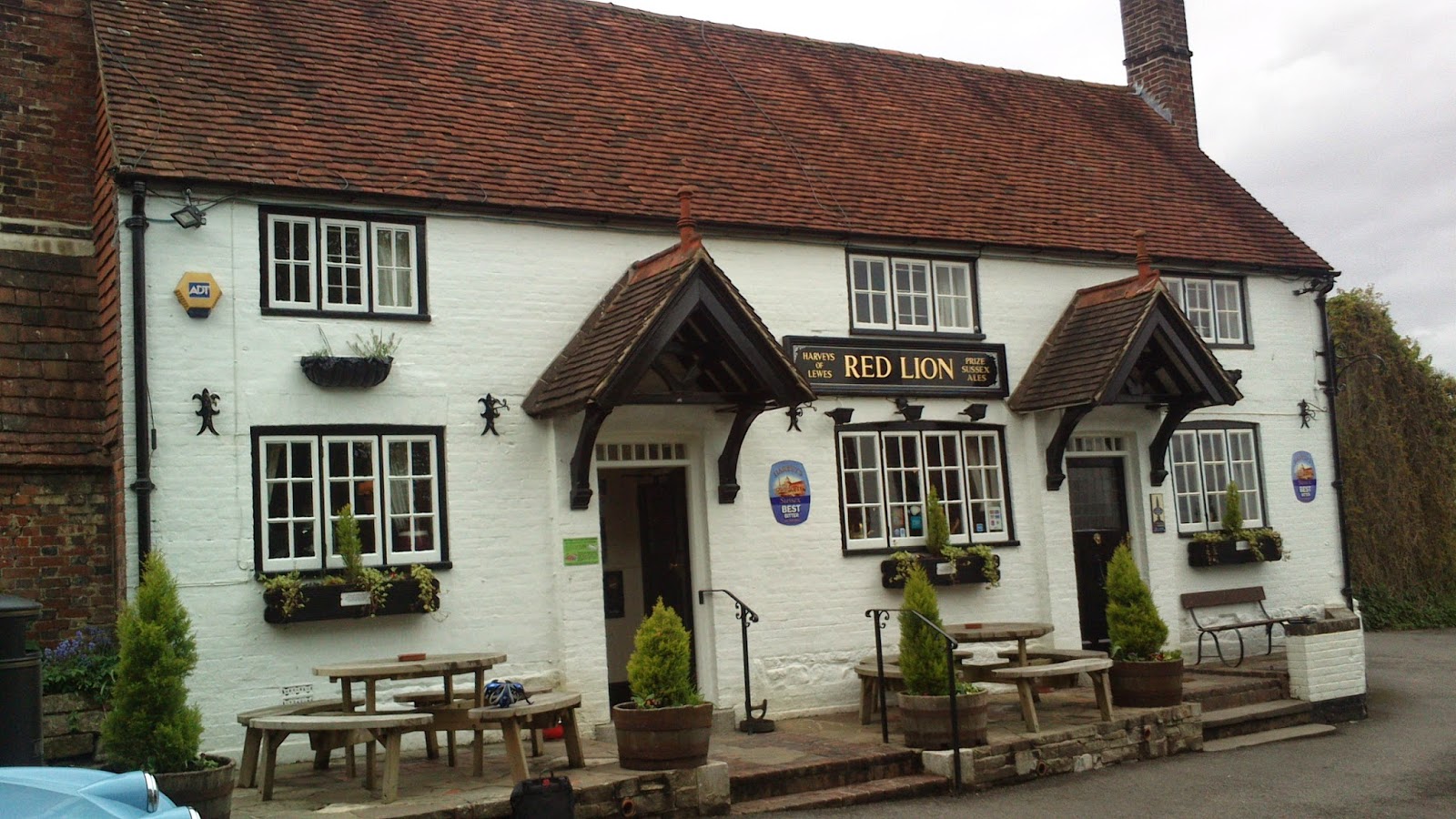 Some Photo's from the Easter Tour 2014

I have already posted some photo's of Foxton Lock on the KPRC Blog to help augment Jakes blog.
Here are some more to tell the tale of what was a very challenging tour in more ways than one but very memorable and far more challenging than I had expected. I must say I admired those that rode all the way from home and back it must have been quite a challenge and I guess around 300  miles round trip or more! 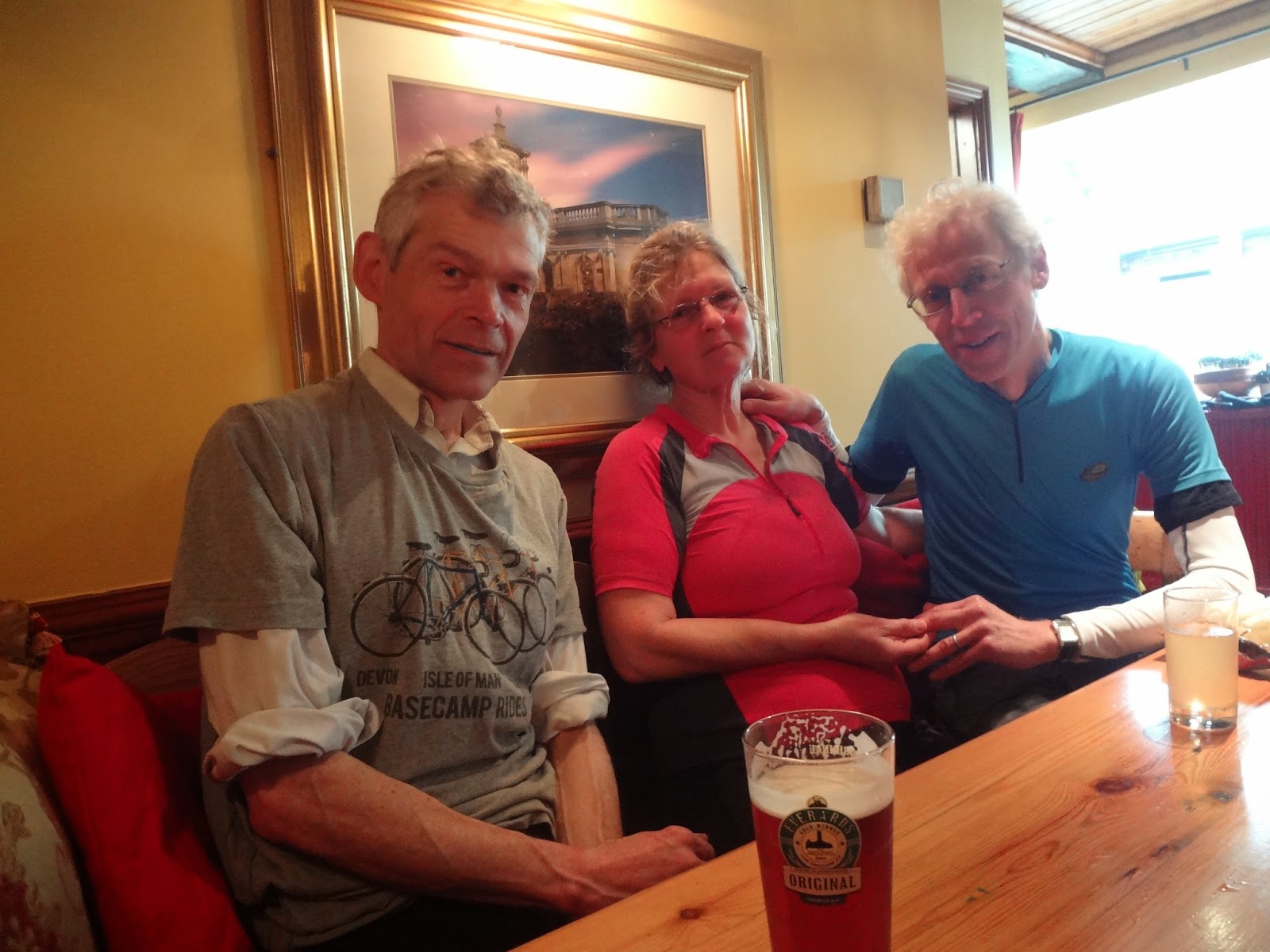 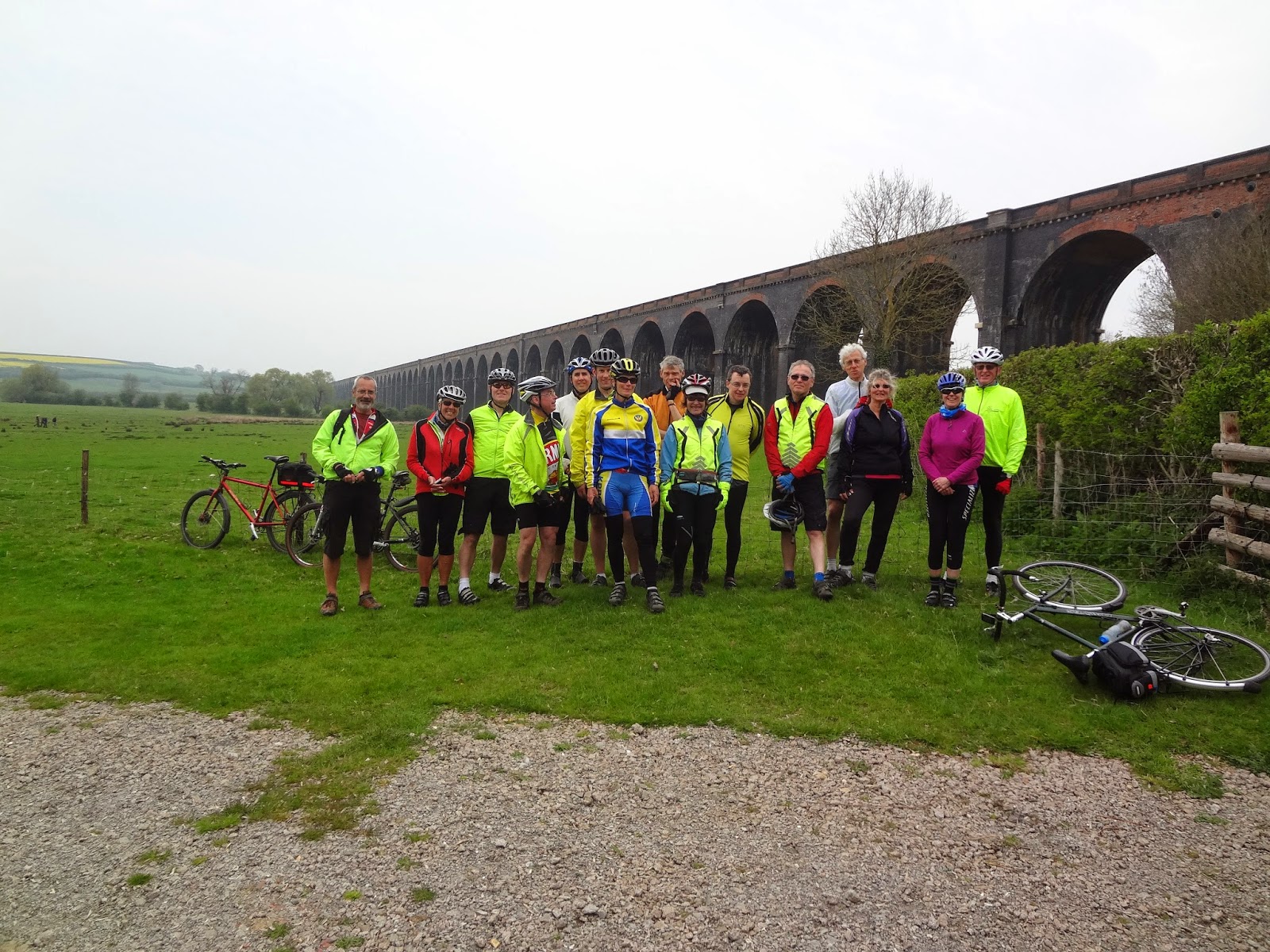 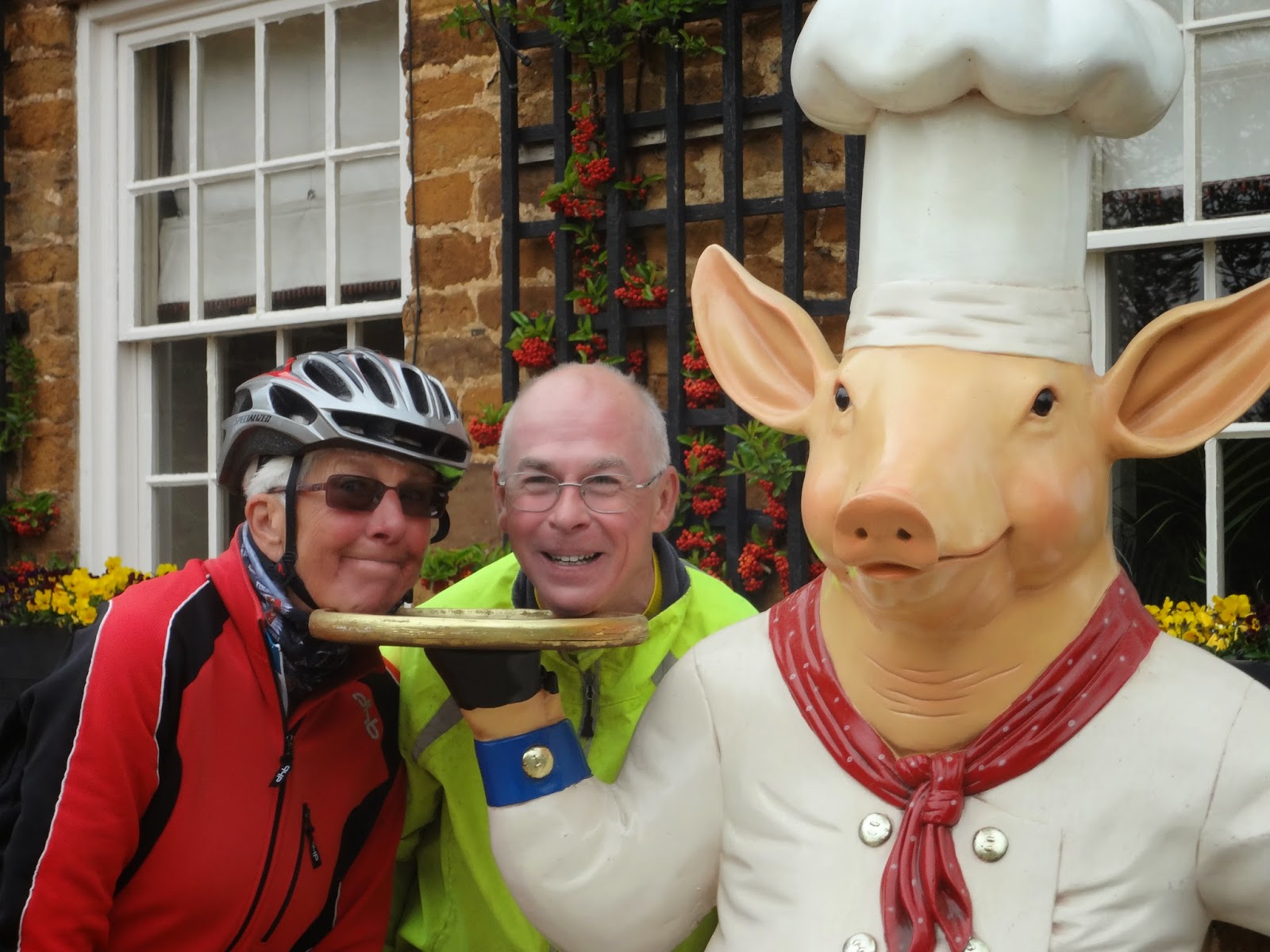 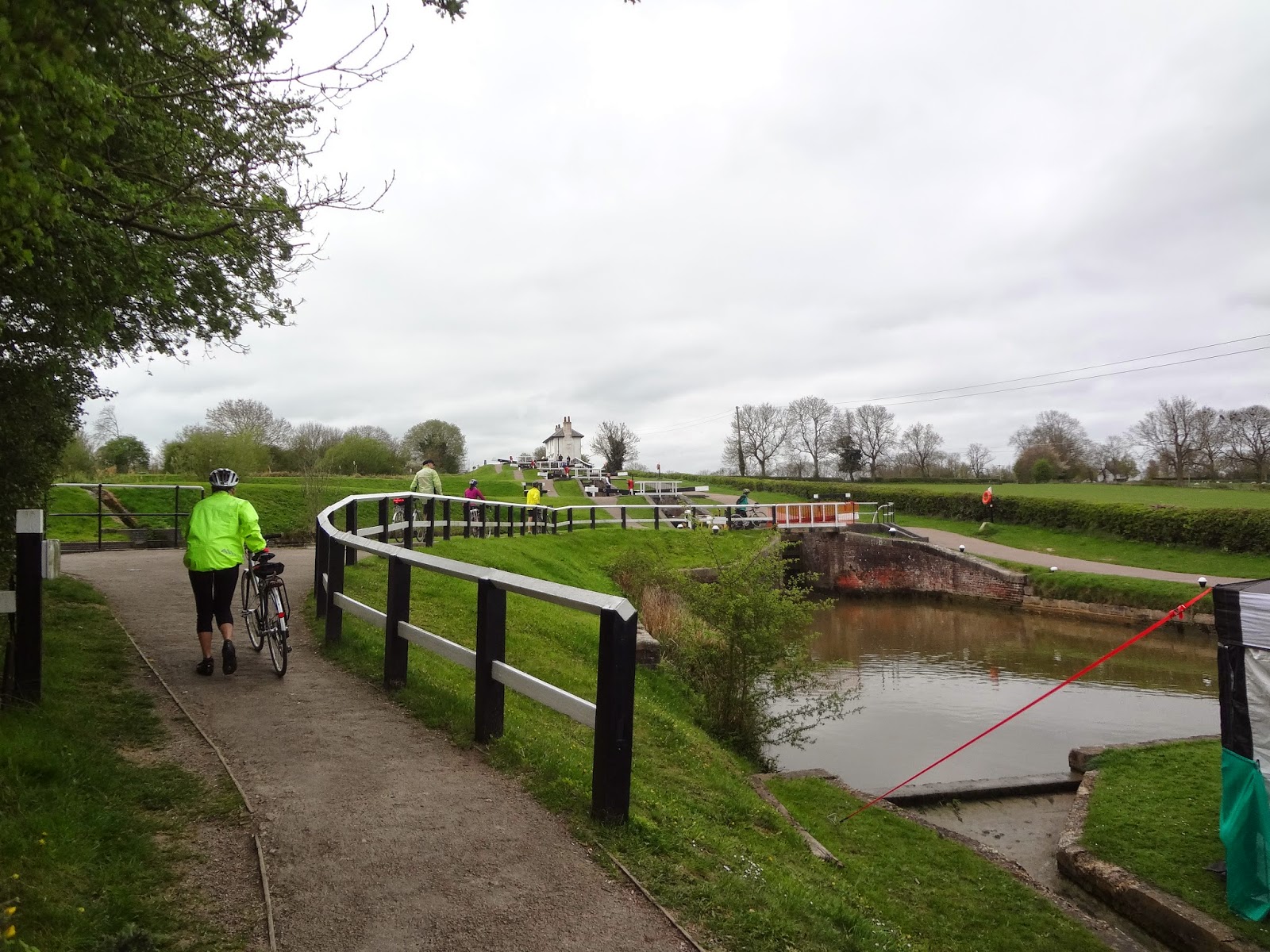 Without getting too deeply into the technicalities...

After another two hour telephone conversation and nearly four weeks, Virgin have finally accepted that my problem is their fault. At their prompting I was switched from landline to cable at the end of March. What they now admit that the older websites such as SWL can only be updated by landline (ADSL) users! I imagine changing that would be a very low priority and might take months (years or even never).

The quickest solution is to use new software, a new email address and a new website. But and there are always buts - I'm only allowed one website so any website can only be created from what's held on my PC. These files may/may not be complete or accurate.

For users the current website will disappear but (hopefully) only for an hour or two whilst I test the new website. The blogs are not affected and I'll update them before and after any changeover. This should be in the next few days. When I'm fully satisfied I'll ask Lisa to update the cyclingswlondon.org.uk link.
Posted by RaasayWarden at 20:50 1 comment:

My hardest Easter tour - indeed Sunday was a day of semi-rest for two of us.

Chilly north/northeasterly winds persisted throughout the weekend to produce a mix of sunshine and light showers. The heaviest rain fell on the way home - we were in a Stewkley pub so missing a localised thunderstorm! But the abiding memory will be of hills, short but lots of them. 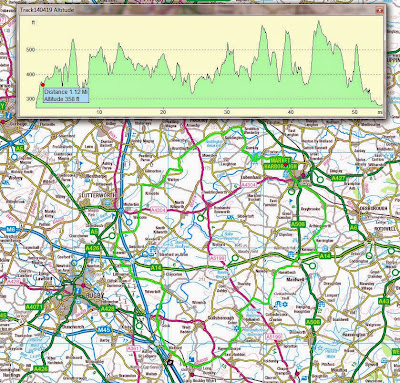 Posted by RaasayWarden at 08:42 No comments:

Due to the continuing incompetence of Virgin Media, I'm unable to update the website so this will have to do! 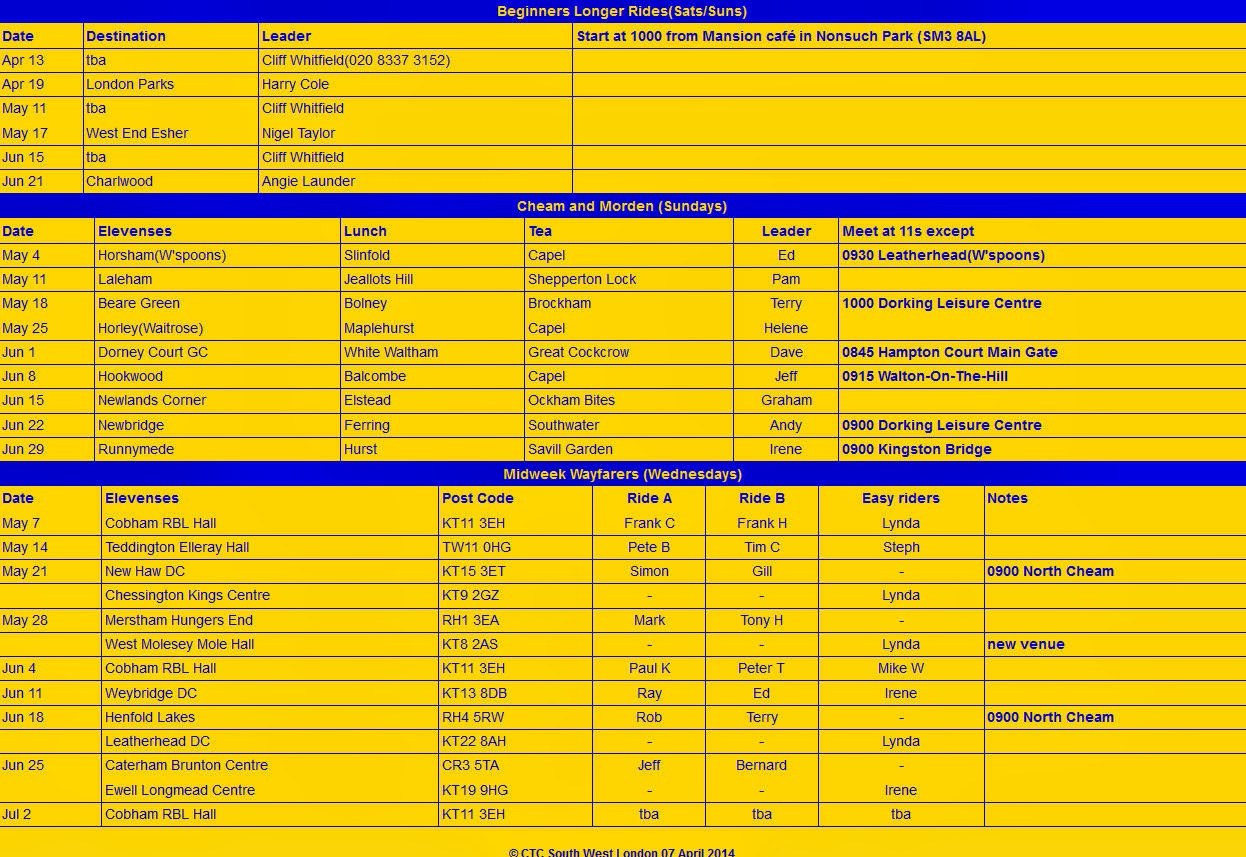 Posted by RaasayWarden at 07:48 No comments:

Posted by Tartan Socks(long) at 17:02 No comments: 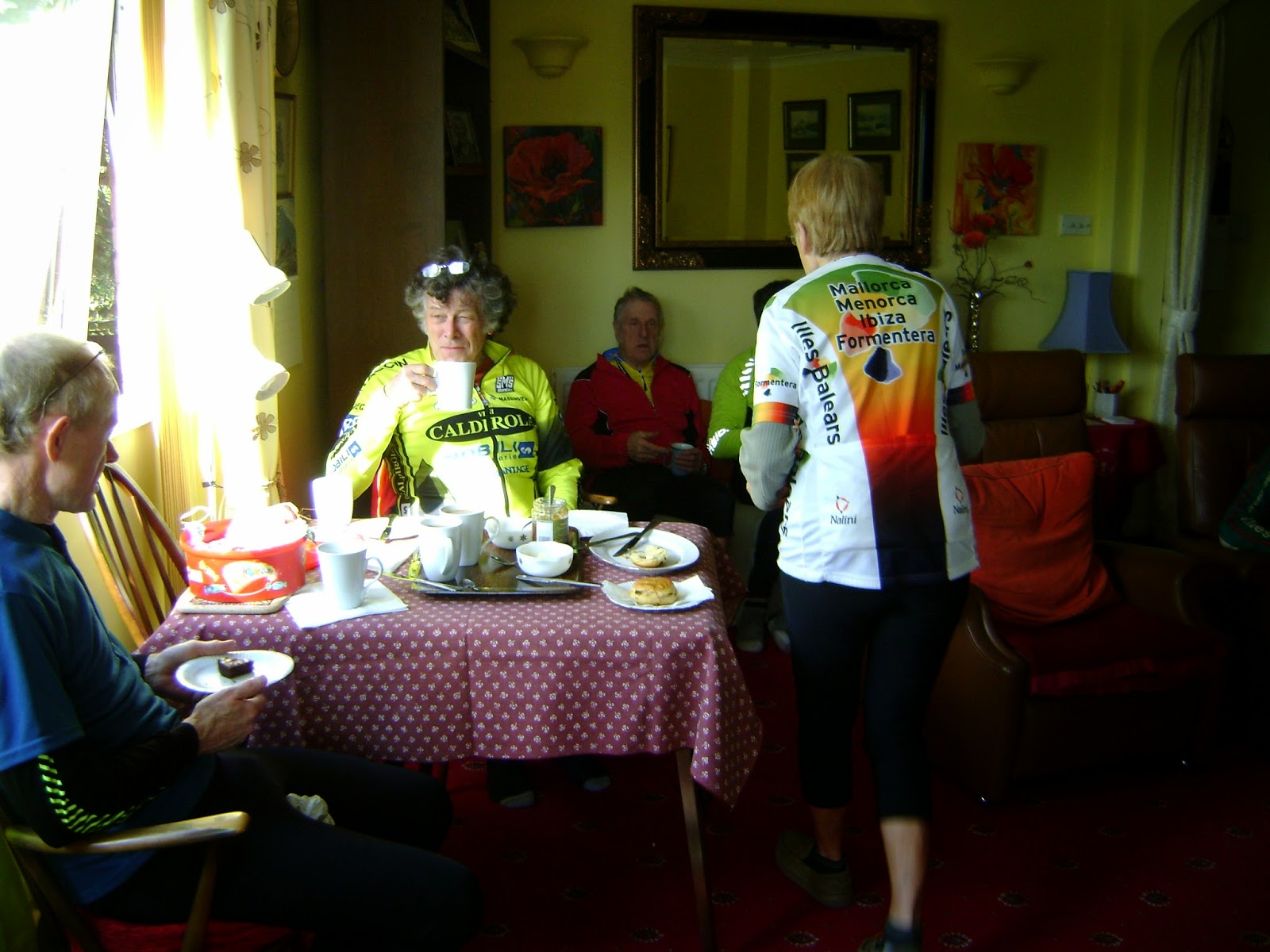 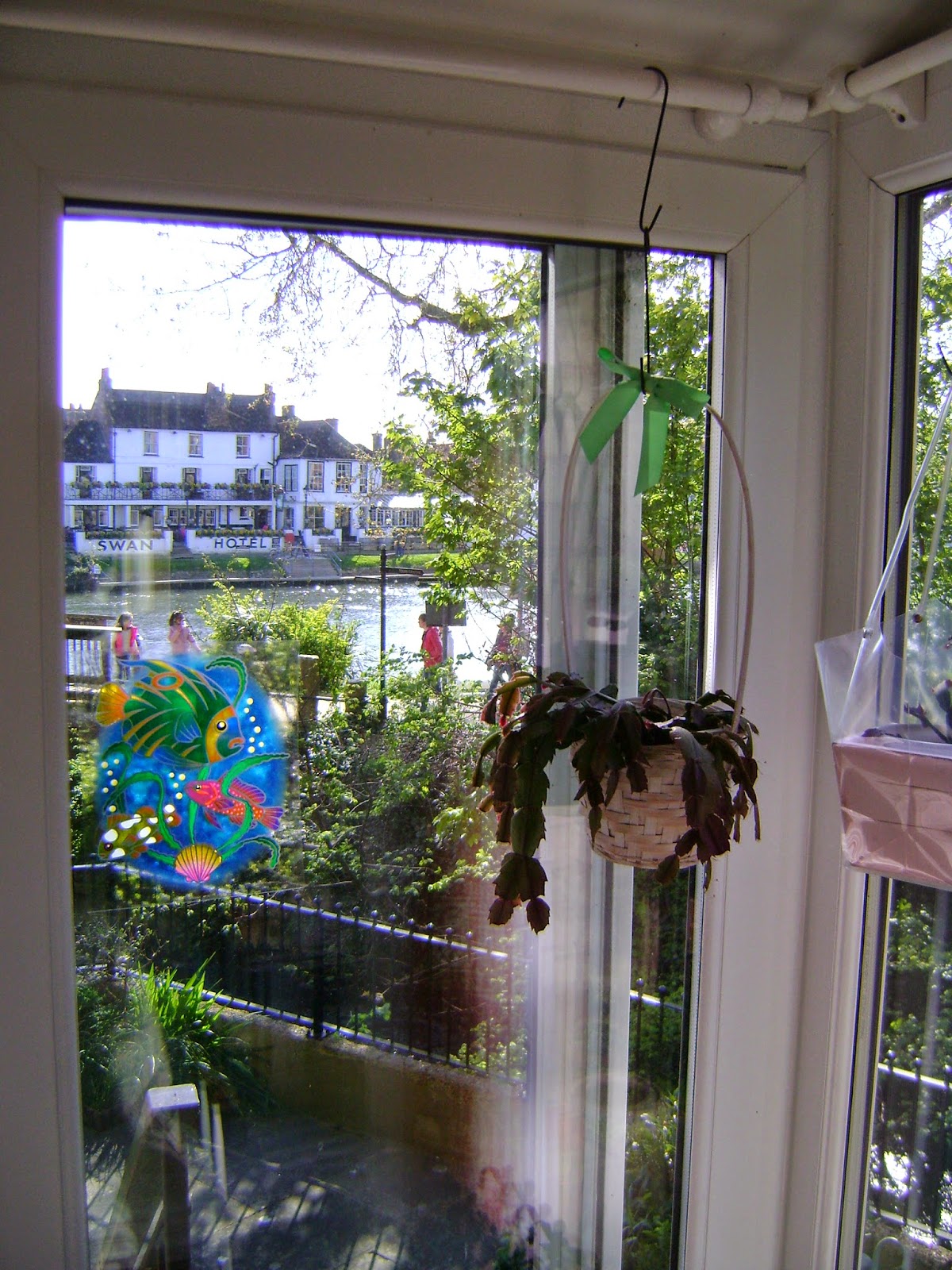 For those out and about over Easter here's the weather ..........just move the arrow to the required day/days and play animation............Sunday looks pants!


HAPPY EASTER ALL!!
Posted by Tartan Socks(long) at 17:50 No comments:

A fine sunny day produced a fine crop of riders at Kingston Bridge - thirteen in all! Bushy Park, the Feltham wheat belt, Ashford and Stanwell got us to a rendezvous with Irene and Pam in the middle of Colnbrook. The fun and games had already started - Tony (puncture in Poyle), Chris (slow puncture), and Andy (AWOL). As special treats I tossed in the Lakeside Road Incinerator and off-road sections  of NCN 61. Most (including the missing Andy) were in the cafe overlooking the lake but 11s for four stragglers was at the other (and unknown to me) cafe in Black Park.

The restart was protracted as the four had to be rounded up whilst others stood transfixed by the manoeuvrings of model boats on the lake. Roads still showed signs of the recent floods but what really caught the eye were the innumerable potholes. Near to Fulmer and near to Hedgerley got us to Littleworth Common (nearly). But instead of right then left I went left then right meaning a long descent was followed by a long ascent up the same hill albeit on different roads. Nevertheless we were at The Jolly Woodman before one. Taking the landlady's advice we removed our bikes from the garden to the car park. It didn't deter us from sampling the menu.

To avoid a repeat of last week's ride we headed for Taplow but not before dispatching Chris towards Burnham (he'd finally given up on his slow puncture). Our numbers were further diminished as Vic and Jeff left for differing reasons. The Olympic rowing lake (for anyone who'd never been there), Eton Wick, Horton and Poyle led us to tea at North's of Staines. To my surprise all three runaways turned up so only Tony missed for family reasons. About 60 (plus 2 extra) miles door to door.

PS Due to the incompetence of  Virgin Media, I've been unable to update the website for the last two weeks. I'm on my fifth round of communication!
Posted by RaasayWarden at 12:36 No comments: 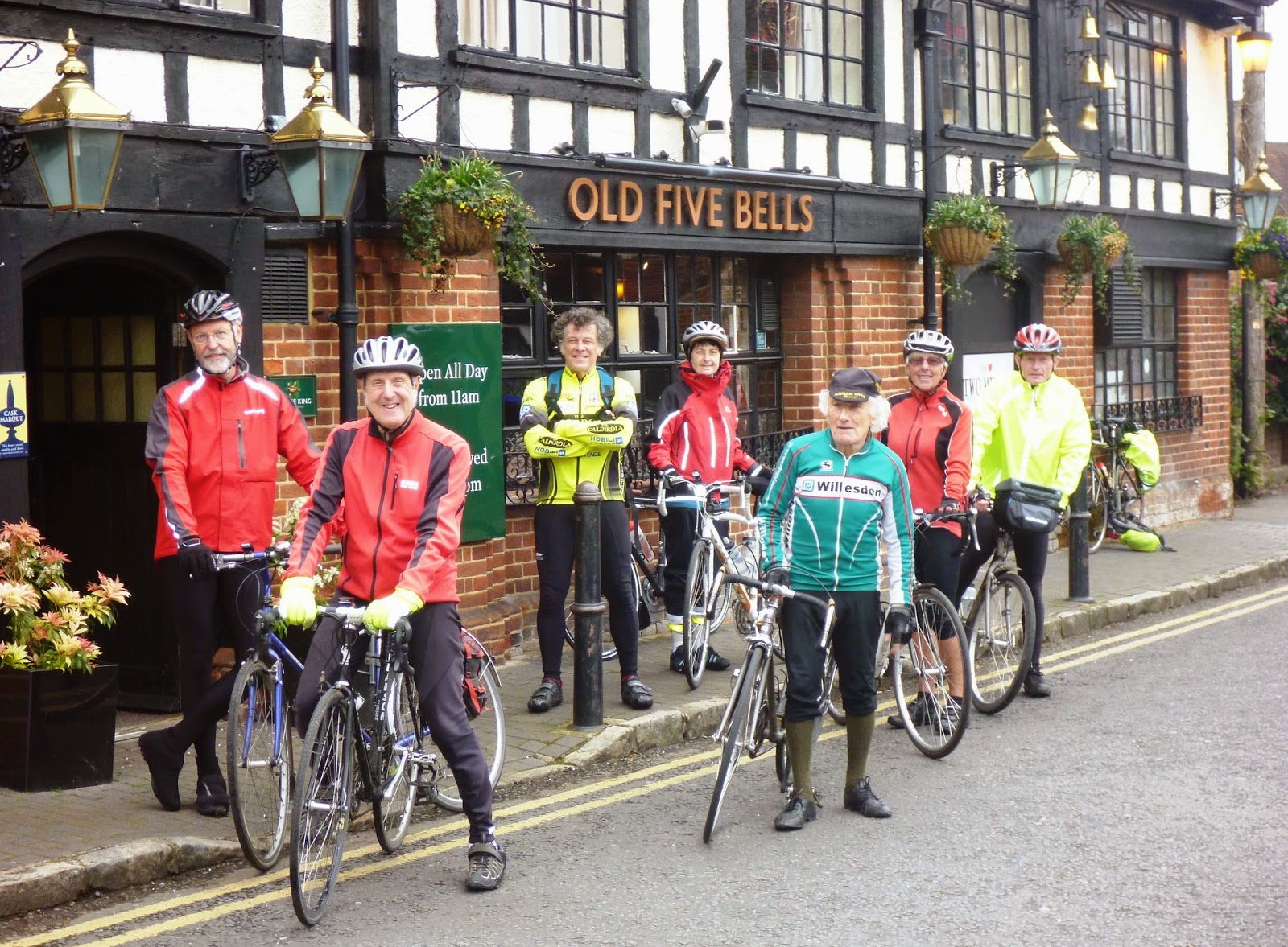 Two young belles with  five old reprobates  at the Old Five Bells
The early morning rain was most unfortunate for it  deterred some riders from starting on their journey to Egham for elevenses!    I was spared a soaking for instead of cycling  I was cooking sausages and onions in preparation for their elevenses.   In the mean time, Irene and Alan very kindly cycled to Weybridge station to meet Lillian who does not know this area.
Bill and Margaret were the first to arrive, just as I was returning from the shops with the necessary rolls - and then Graham arrived with Mike, and very shortly Ed, Vic, Irene, Lillian and Neil and Jeff!    Four more cyclists phoned to apologise for not coming to elevenses as had been arranged.

We were on our way to Burnham by 11.30 -ish first of all crossing Runnymede meadow to pick up the A308 to Old Windsor.... (whoops, Irene punctured as we approached Old Windsor so she walked home at least 3 miles, repaired the puncture, then cycled out to meet us at Dorney on our way to tea!  Well done Irene).   The group continued to Datchet, across Eton Bridge to Eton Wick.  Here I took a bridle path route away from the main road, to avoid the strong head wind and to show others a route that Irene and I favour!    From Dorney we continued in the direction of  Taplow, taking a right into Hitcham Lane where there is a dear little church that appeared to be open, which would have been a first according to Vic!  Anyway, we stopped, found the door locked but a chap appeared who unlocked the door for Vic and others!   I did not go in myself but half the group did and I'm sure Jeff would have taken several photos!  Lillian was in wonder of the amazing old stained glass windows!
It was but a mile or so to The Five Bells pub for lunch where we were cosseted with laid up tables etc.   Food didn't take long to arrive and it was very good.  A group of Uxbridge Loiterers (CTC) were already eating when we arrived - they say hello Tony!
Now homeward bound - via Huntercombe Lane to Dorney where we joined the Jubilee River, exiting on to the  Eton Road which led us to Datchet, Horton, Wraysbury,  Staines and so to tea at Notcutts, Staines Road, Laleham.
As usual, we  went our separate ways after tea....Irene and I escorted Lillian back to Weybridge station for which she was very grateful - at least it gave me a few more miles towards the days total - which was not very much by comparison!!
Thanks to all for being there, good day, good company...and I hope you all got home before it rained again.
Pam :) :)

Fans of 'Carry On' films may recognise the church of St Mary as the location for 'Carry on Dick', in which Sid James played the part of the Reverend Flasher, alias Dick Turpin.
RJT
Posted by Jeff at 18:58 No comments:

Once again I find myself in the role of amanuensis; once again a largely uneventful ride on officially the warmest day of the year so far. Certainly there were hordes of cyclists; most of whom overtook us with something to spare.

At the top of Staple Lane were the signs of the Cycling Weekly Cyclone; later on we met competitors close by Walliswood. At a cyclists' cafe recently featured in Cycle magazine, Dave opined that "most expensive" rather than "favourite" was more accurate as £20 bought him two breakfasts and not much small change. Leaving eight behind for various reasons, Ed settled on a flat route via Peaslake, Ewhurst and Rowhook to Warnham. As befits Mothers' Day, most lunched in the churchyard before crossing to The Sussex Oak for liquid refreshment. In time seven became eleven as Terry, then Chris and finally the two Petes joined us.

Balfour Beatty were hard at work on the Warnham station crossing so bikes had to be carried. But there was no real delay and 25 minutes before Capel church's official opening hour we were making our selection of cakes. Roger put in an appearance; he was leading a KCC ride from Horsham station(!) to The Haven and Capel and Kingston. About 60 miles door to door.
Posted by RaasayWarden at 14:01 No comments: