Richard chose the direct route to Knockholt via the 1:4 North face of Cudham. I approached from the South along the Pilgrims’ Way and Westerham Hill and was surprised to find the trio of Naiads (Stephanie, Ed and Richard) still lingering and gently steaming at Green & Pleasant. S. headed home with her usual bright smile, while Richard revised his lunch destination to the Windmill at Sevenoaks Weald.

We arrived spot on 1pm to find only a brimming skip outside another skeleton pub, its spirit elevated to the great brewery in the sky. Here was the parting of the ways; Richard and Ed to Riverhead and the Lone Ranger South in increasingly heavy rain towards Bough Beech, in a vain effort to meet up with Daniel.

We passed unseen at Edenbridge, where D decided to lunch, while I resisted all calorific temptation and challenged the flooded lanes, hidden potholes and hostile motorists to head for home. It was cold and very wet but in some ways really quite enjoyable. On reaching home, the distance ridden seemed more than the 60 miles reported by Cateye. The damp squib was no hot water for the shower. Are there no limits to self-discipline?

Sunday 23rd Sept.
A lovely run to Knockholt, only a slight splattering of rain.  Was pleased with my return route, particularly at Hawley's Corner where I took the "private road", Chestnut Avenue, which got me to the top of the road out of Westerham without losing any height.  Then a straight run to Woldingham, Caterham, Coulsdon.  Unfortunately the rain got heavier and  on my last uphill to Banstead my chain broke, I walked to the top, persuaded the bus driver of the S1 to let me on with bike and got bus to Sutton and train to South Merton so home safely.  Steph
Posted by Steph at 20:17 2 comments: 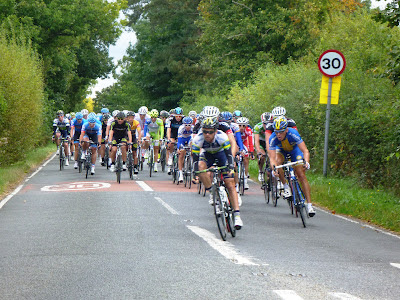 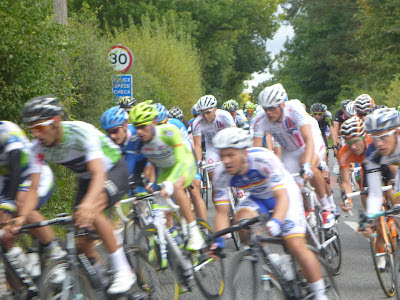 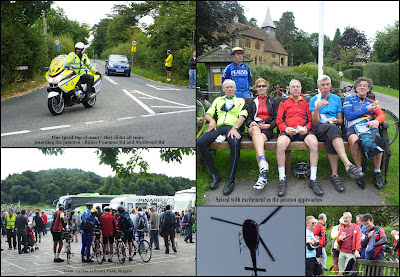 As everyone was flashing cameras, I thought that there would be lots of pics on the blog.
Here is something to fill the gap
Posted by Jeff at 18:28 No comments: 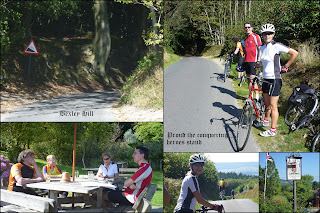 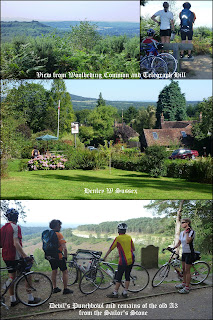 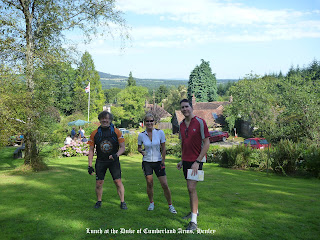 Superb late summer ride through  glorious and rolling lush  countryside in Surrey, West Sussex and Hampshire.
This is of the very best that England has to offer.

Having frightened off some, we were but seven at Wetherspoons Guildford for breakfast. Four (Bob, Daniel, Janice, Jeff) had ridden; three (Irene, John and the author) had come by train. Leaving Bob behind, we started with the familiar (very familiar to some) Shalford, Bramley, Hascombe and Dunsfold. Then it was terra incognita as we skirted Shillinglee and crossed the A283. Here John took a shortcut to Haslemere whilst the rest headed along the first undulating green tunnel. By Lickford and its still closed pub (offers to: C Evans c/o BBC) we were back to square one heightwise. Now started the climb of the ever steepening Bexleyhill. Its 17% roadsign was hotly debated (Daniel's toy said it was 34%!; our two most senior riders felt it merited a close inspection on foot). And thus we arrived at the Duke Of Cumberland from the south. I know of no finer situated pub and don't they know it.

One hour later and with wallets noticeably lighter we headed back turning west towards the  onetime TB sanitorium. After a short roughstuff section we were at the Woolbeding Common viewpoint. With stepladders it might have yielded extensive views but today all I could picked out was the Butser Hill mast. Three miles of downhill followed but by Elmers Marsh cruelly the road began to climb and continued so through Liphook, Bramshott, Headley Down (of Led Zep fame). In Grayshott Daniel needed cash and the Editor, bananas and Lucozade.

All settled for a calorie laden slice (two for our trencherman) of cake at Hindhead's NT cafe. As anticipated the splendid cyclepath as far as the Sailor's Memorial was full of mobile bollards but the next 2 1/2 miles were walker-free so speeds approached 40 mph as we turned to Thursley and Elstead.  Charterhouse and Loseley were familiar and soon it was all over. Guildford saw the editor joining the train travellers.
A very warm day so thanks to all those green tunnels. Around 55 miles but more importantly 4000+ ft of climbing (suspect; flat battery!)
Posted by Anonymous at 09:17 2 comments:

I missed Wednesday's rides to inspect an "unavoidable" track on Sunday's train assisted ride. It's rideable though some will disagree! Believe me it's worth it. And the new cycle path north from Hindhead is a wonder though I suspect we'll face many more mobile bollards (walkers).

The ride is heavy so cast aside panniers, mudguards and heavy tools. This may get you up Bexley Hill which steepens as it climbs. Not as hard as a recent ride up the A939 which was ridden (apart from sections of the west-east track which definitely wouldn't suit anyone from Tadworth). Anyone seeking early retirement may like to note we'll pass Liphook station and other stations are downhill.

So see you Sunday in Weatherspoons Guildford between 0900 and 1000. I'd like to leave promptly (you know who you are).
Posted by Anonymous at 10:30 1 comment:

A damp autumnal day but we warmed up quickly and enjoyed the cool air on the uphills. We were joined at 11 s by Bob, Daniel, Ed, and at last Jeff, who was on an eating day so we allowed him to finish his bacon sandwich before setting off. We were joined by two riders from the Tadworth Fat Boys - a cycling group I've not encountered before - possibly because I'm not a boy and I'm not fat. Jeff also unlikely to ever be admitted due to his new dietary regime. However the fat boys were most helpful at lunch as they managed to phone back to Henfold Lakes to check that Jeff's cycle helmet with luminous cover was still on the premises. Tea was to be at Guildford but the fat boys were definitely not keen on that direction, perhaps the additional miles would eat into their profile. They did agree to accompany Jeff back to Henfold, cushioning him gently on either side so that no other part of his cycling equipment would fall unnoticed by the wayside.

John led the remainder, Ed, Daniel and I through pretty lanes, past the elevated toilets around Munstead area and on into Shalford Park and Guildford. Unfortunately Daniel punctured (apparently for the third time that day) but John kindly gave an inner tube, Ed lent the use of a splendid pump and soon all was well again. I was suffering with worn brake pads on the rear so did not stop for tea but continued slowly using front brakes only and eventually caught the train from Leatherhead. Must pay more attention to bike maintenance. A lovely route, thank you John, even the bits of off-road on the Downslink were tarmaced to a standard acceptable to all. Oh and the green outside the Sun pub at Dunsfold was a very pleasant lunch spot with cyclists from a charity 100km ride passing regularly.
Steph
Posted by Lisa at 18:23 No comments: 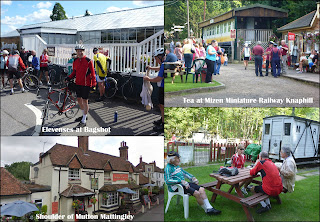 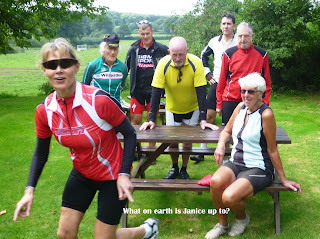 With 11's at Bagshot there was an 8am start from Kingston Bridge. Some made their own way, some followed Dave and I followed the map, as for me Bagshot is terra incognita. After bevs and half a sin-laden bacon sandwich we set off in sunshine, some for home and some for Mattingley. I shan't (that is can't) describe Dave's route, though it did start with a lovely long downhill along the A30, and ended up at Mattingley. We lunched outside in the peaceful, rustic garden of the Shoulder of Mutton.

A welcome change of plan moved our tea stop from Mytchett to the Mizen Miniature Railway at Knaphill. Dave then guided the disoriented to roads they knew, to navigate home. Janice, Daniel and I headed for Leatherhead before parting. A most enjoyable ride of 82 miles, despite my somehow losing my wristwatch en route. Still, that gave me an excellent excuse to replace it.

Many thanks to Dave for the ride and to everyone for their company.