Choice of cakes at Capel church.

Suitably refreshed, I led Ann, Keith and David south from a very popular Tanhouse Farm, leaving Lilian, Jeff and Graham to 'do their own thing'. A familiar route via Rusper and Warnham led to a less familiar bridleway from Broadbridge  Heath avoiding Horsham. After a short stretch of the A264 we turned off to Slinfold, shortly joining the A29 briefly before turning off to The Haven. The Blue Ship served the food pretty quickly, but Dave only quenched his thirst before heading home for allotment duties.

After lunch we had a leisurely familiar ride to Capel via Rudgwick, Ellens Green, Okewood Hill and Weare Street ensuring we didn't arrive before opening time (1500 hrs). The usual splendid choice of cakes was available, still all produced by one shy lady. We then proceded in a homeward direction.

A very pleasant day, thanks to all for your company, also to the Clerk of the Weather.

Fathers Day'    .... and there were lots of families in Notcutts, maybe celebrating with breakfasts and not lunches ?!?!... As I walked out of my back door - the rain came down - so waterproofs on - but it had stopped during my short ride to elevenses.  Terry arrived the same time as me and there was already a welcoming group inside.  Bob, who didn't go to lunch, Tony who cycled with us to Horton where he left us to join his family.  For the rest of the day (almost), Graham, Ed, Terry, Steve Duffin (a very pleasant surprise), Gemma who joined us for the first time, then Carolyn arrived as we were leaving.

Now I am excusing myself because the route was pretty flat!  I chose not to go into Windsor Great Park (a more challenging route) as I had heard there were several events going on...One in particular was the V-CC's (Veteran Cycle Club) annual 'very old bikes' ride when all dress in period clothing and it is very well attended.   Hence,we cycled to lunch via Wraysbury, Datchet, Eton, Dorney, along side the M4 to Bray then cycle route 4 into Maidenhead where we had a very sociable lunch in The Bear pub (Wetherspoons).  Seems, generally speaking,  one does not celebrate Mothers Day or Fathers day in a 'Wetherspoons' for there were plenty of empty tables.Our group photo was taken on the way to lunch and then a couple more photos at lunch time.

Our route to tea....... along the A4 to Marsh Lane, the Jubilee River, turning off for Windsor along side the railway arches.   Over Eton Bridge and up past Windsor Castle to Old Windsor, Runnymede, Egham, Thorpe, Chertsey to Shepperton.  Ed stopped for a breather along Runnymede with instructions for us to continue.  (Ed text and told me he had cycled home in his own time).

Tea was at Nauticalia, Shepperton where Steve, Terry, Graham, Gemma and I spent some time talking of 'all things cycling; !!!!   Carolyn had left us to get home asap!

We were so lucky for it stayed dry - bright and very breezy as from the time we left Notcutts.  Welcome to Gemma - we look forward to you joining us again and  my thanks to all for joining me: it was a lovely day....until next time, happy cycling, Pam :) :)

In 1519, Magellan set out on the first circumnavigation of the globe.   Only 500 years later, a brave crew of Cheam and Morden riders set out to mark this occasion by successfully circumnavigating Woking.   Well, that's how it worked out anyway.   We were originally planning an even more ambitious journey to The Sun - the one at Windlesham - but a rather stressed landlady told me that she couldn't accommodate us because she had no staff.

In fact the Cheam and Morden crew were suffering staff shortages too - Pam and Vic were away at a Veteran Cycle Club rally, and Tony was away on holiday.   So the regulars at 11s comprised just Bob, Ed, Graham, Lena. and Ray, along with myself.   Only Ray and Graham were planning to ride, but the day was saved by a group of riders from the Ealing Friday Riders, mostly new to the C&M,  who joined us for the day:   Niall, who has been before, Ruth, Jan, Guy and Roger.


It was a good day for a sailing voyage: bright and breezy, just like us as we set off via Addlestone and Ottershaw to Stonehill Road, bound towards Chobham.   Tacking south along Philpot Lane brought us to Horsell, where we turned right to cross the Basingstoke Canal at Arthur's Bridge.   Then it was plain sailing down White Rose Lane, across Woking Park and through to The Saddlers' Arms at Send Marsh, where we took on victuals for the return journey, this time with the wind behind us. 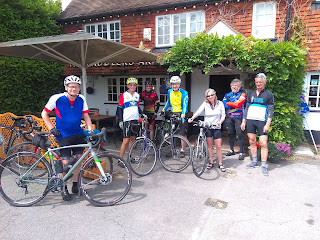 Leaving via Pyrford, again we sailed dangerously close to Woking itself, in order to get on to the Basingstoke Canal, which led us to New Haw and then on familiar roads to Addlestone and Chertsey.    We had kept dry up to now but the sky was filling with threatening clouds, and Niall and Guy made a dash for home.  Graham left us around this point too, leaving five who decided that outdoors tea at Shepperton Lock was unwise, so we went to the nearby Nauticalia cafe for tea and cake, just as a long spell of rain started.    It was still raining when we finished, but there were promises of "it's brightening up over there" so we lingered, and indeed it did stop raining for our triumphant journey home after our massive achievement.   Well done all and thank you for your company, especially to Graham who back-marked.

Let's hope The Sun at Windlesham is back to it's normal hospitable self soon.

Incidentally, it took Magellan's crew almost three years to complete the circumnavigation.   Magellan himself died in 1521 in the Phillipines and the journey was completed under the command of Juan Sebastian Elcano, but only after the two joint captains elected to replace Magellan were captured and murdered.  They set out with five ships and 270 men, and returned with one ship and 19 men, so we should count ourselves lucky.

Just to fill in the blanks on the Rides List, our lunch destination on 30 June will be The Sennochian (Wetherspoons) at Sevenoaks.   The (hopefully) scenic route will take us via Shoreham (Kent).   Not a totally flat ride but no really long, steep climbs.   The lunch stop is very convenient for Sevenoaks  station so, if you are travelling out to elevenses and back from lunch by train, it might be cheaper to buy an Anytime Return to Sevenoaks and break your outward journey at Petts Wood.   I'll lead a ride towards home from lunch if there is any demand, but might stop at (eg) Purley as the ride onwards from there to Walton on a Sunday afternoon is not congenial!
Posted by David W at 07:58 No comments:

Due to a staffing crisis, we are unable to visit The Sun at Windlesham this weekend, so I plan to go to The Saddlers Arms in Send Marsh instead.   Elevenses will still be at The Riverhouse Barn, Walton, and tea will still be at Shepperton.   My apologies for the late change.
Posted by Simon L at 19:15 No comments:

A nice bright day and blue skies, the first day that it really felt like summer. Cycling into Longacres GC I arrived just behind Pam. Soon to be followed by Ed, Graham, Terry, Ray and eventually Vic.

The route was up through Windsor great park via a very short section of the A30 and Middle hill. Just before reaching the park we dropped Ed who has not yet recovered from 3 weeks off the bike due to illness. He headed for Savill garden and some food before heading for Egham Station.

Back roads and private estates took us into Windlesham and lunch at an old favourite, the Sun pub. Lunch in the sun, what a treat.

Fed and watered we set off for the return trip. We stopped briefly in Gracious  Pond road to view the replaced memorial plaque to Alf Whiteway of Clarence Wheelers(see picture). Through Burrowhill and onto Addlestone and dispersal as no one really wanted to stop for tea. And I had my granddaughters 1st birthday party to attend. Vic headed home as did Pam and Terry while Graham and Ray followed me as far as Hampton. A lovely warm day on the bike. 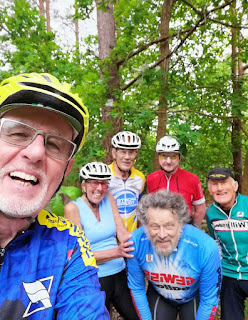 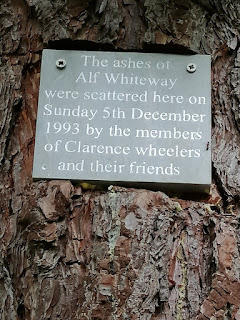