A very cold ride to 11's at the Golden cafe Adlestone, luckily no wind. A few were already seated and a steady stream arrived right upto 11.00am with a total of around 20, not all of whom where going further. So a delayed start and the puncture fairy struck Terry immediately who waived us on and said he would meet us at lunch. John G said that he may struggle and to go on and likewise he would meet us at lunch.


Leaving Adlestone on the B3121 to the Ottershaw roundabout and then the Chobham road past Fareoaks and a left, just before Chobham, into Delta Road, at this point we were short of Graham and John G, we waited but for a while and assumed they would make their own way to the Pub, on upto Burrowhill, past The Four Horse Shoes and a left turn onto Steep Hill to warm us up. It was slowly getting milder. Just on the steepest section I noticed ice on the road and got off my bike to warn the group to go easy. Luckily Mr Frosty didn't catch anyone out.


Over the M3 and on to Sunningdale, across the A30 and through Sunninghill and a brief section of the A329 and into Cheapside road, Watersplash Lane and into Windsor Great Park via Ascot gate and Dukes Lane and a left to take us past the Long Walk and onto Bishops Gate and a nice decent of Crimp Hill and to lunch at the Fox and Castle. At the foot of Crimp Hill Graham was waiting for us as he had stayed with John G, who had called it a day earlier. Terry didn't make lunch but got home safely.


The Pub was reasonably busy and lunch was server rather spasmodicly in fits and starts but we were all eventually fed. The afternoons ride to tea was flat and around 13 miles. A few dropped off on the way to get home in daylight. Lots of cake and tea and the few that remained dispersed to wend their own ways home. Thank you one and all for your company. 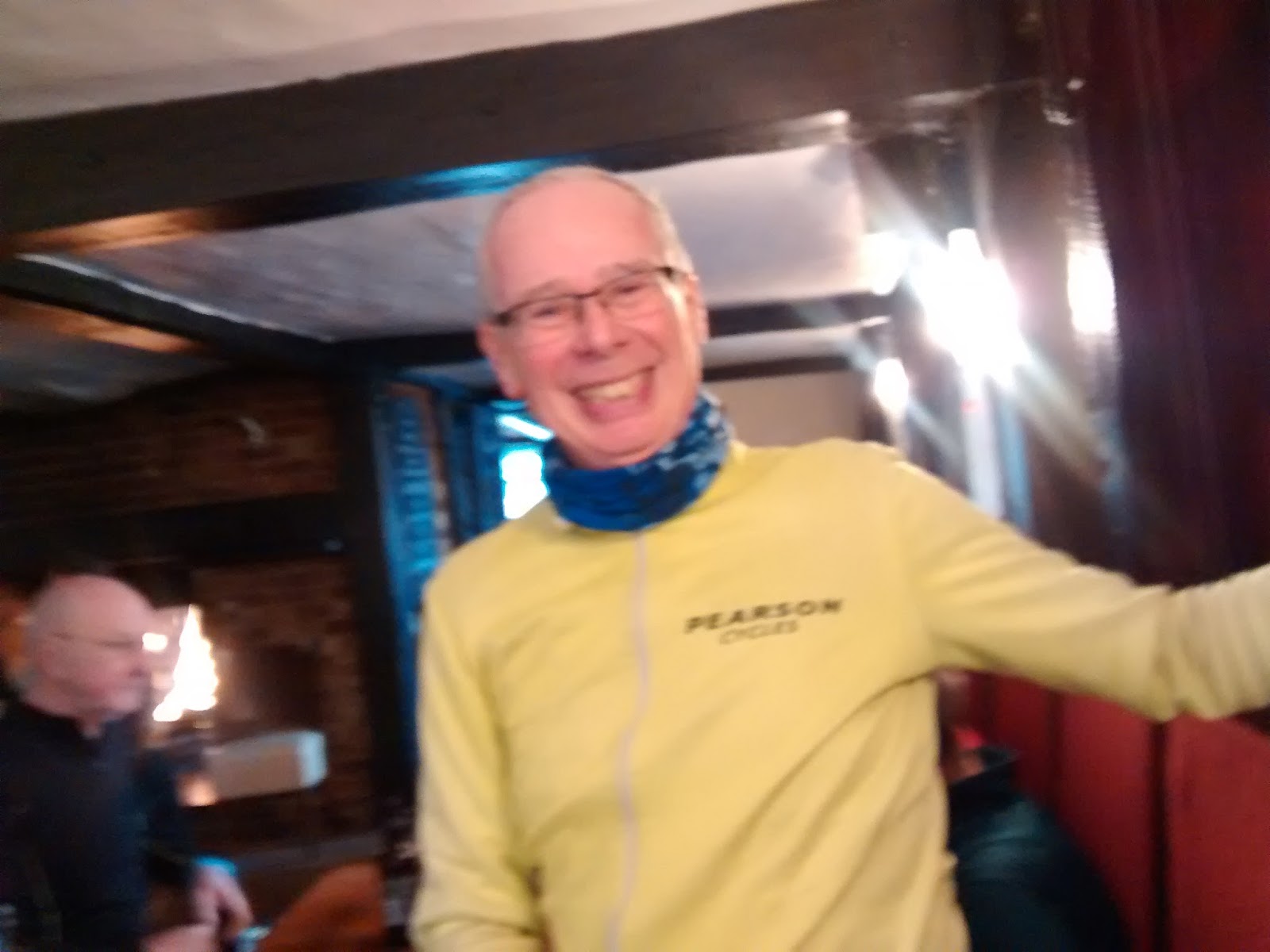 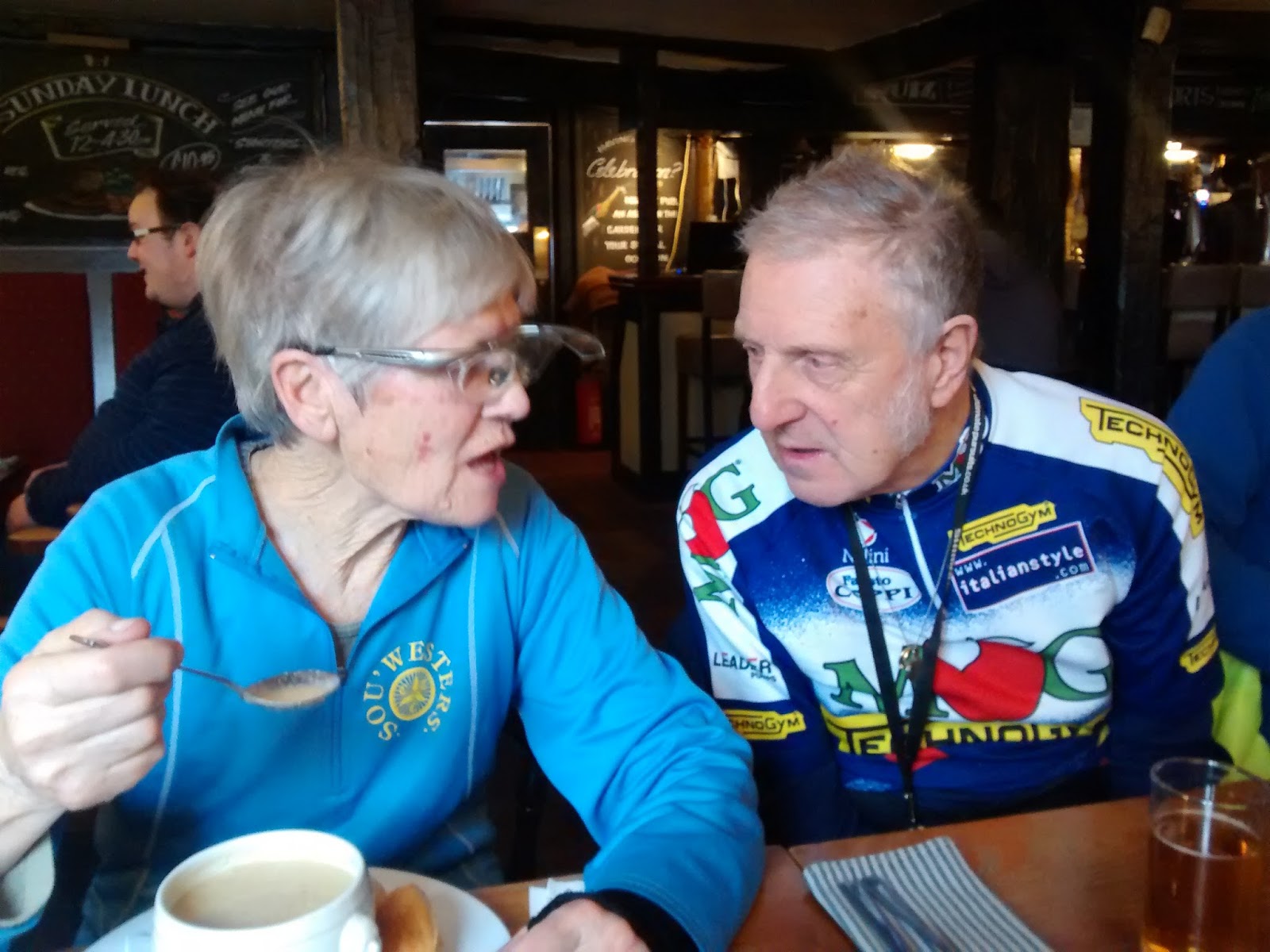 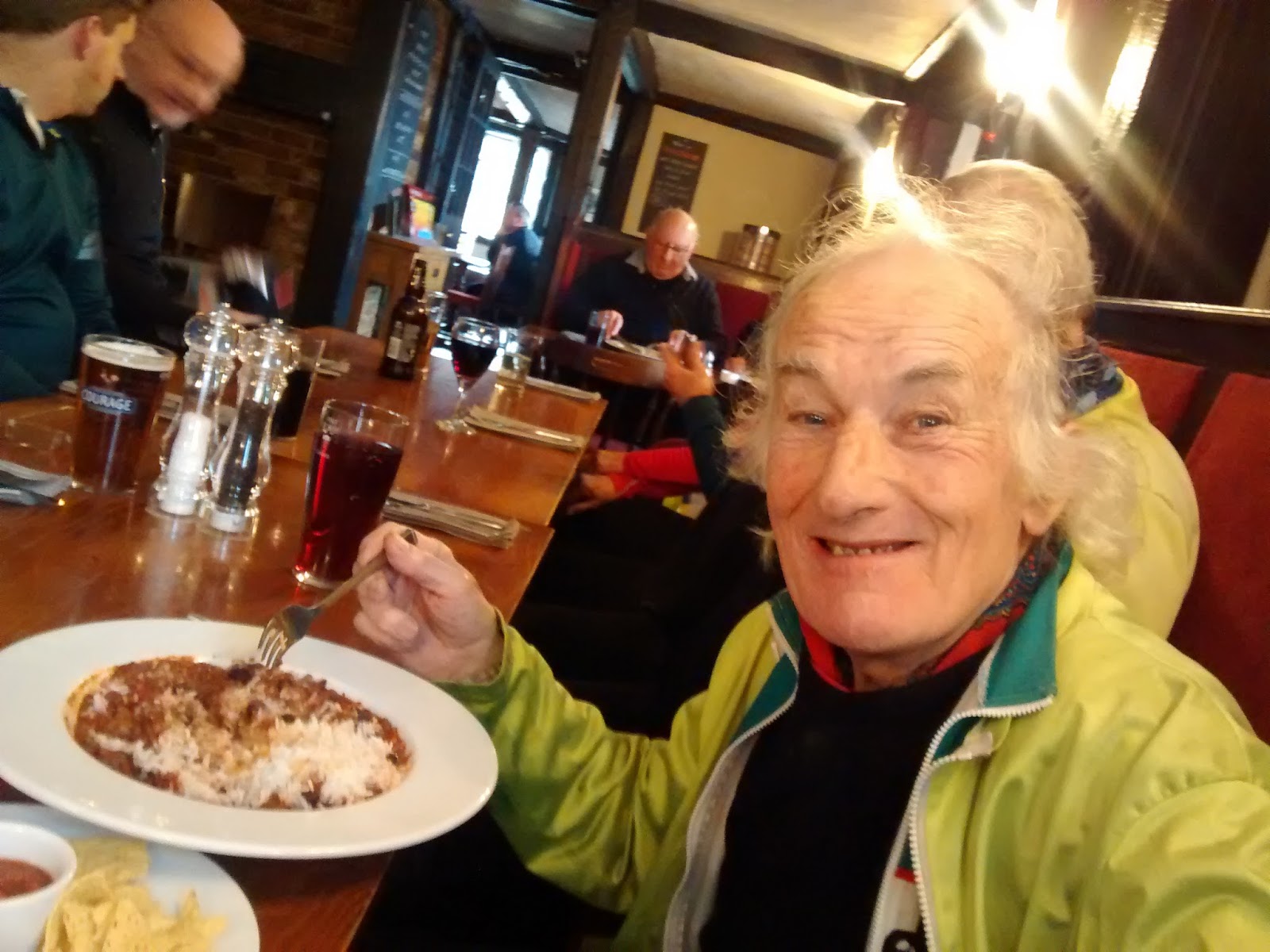 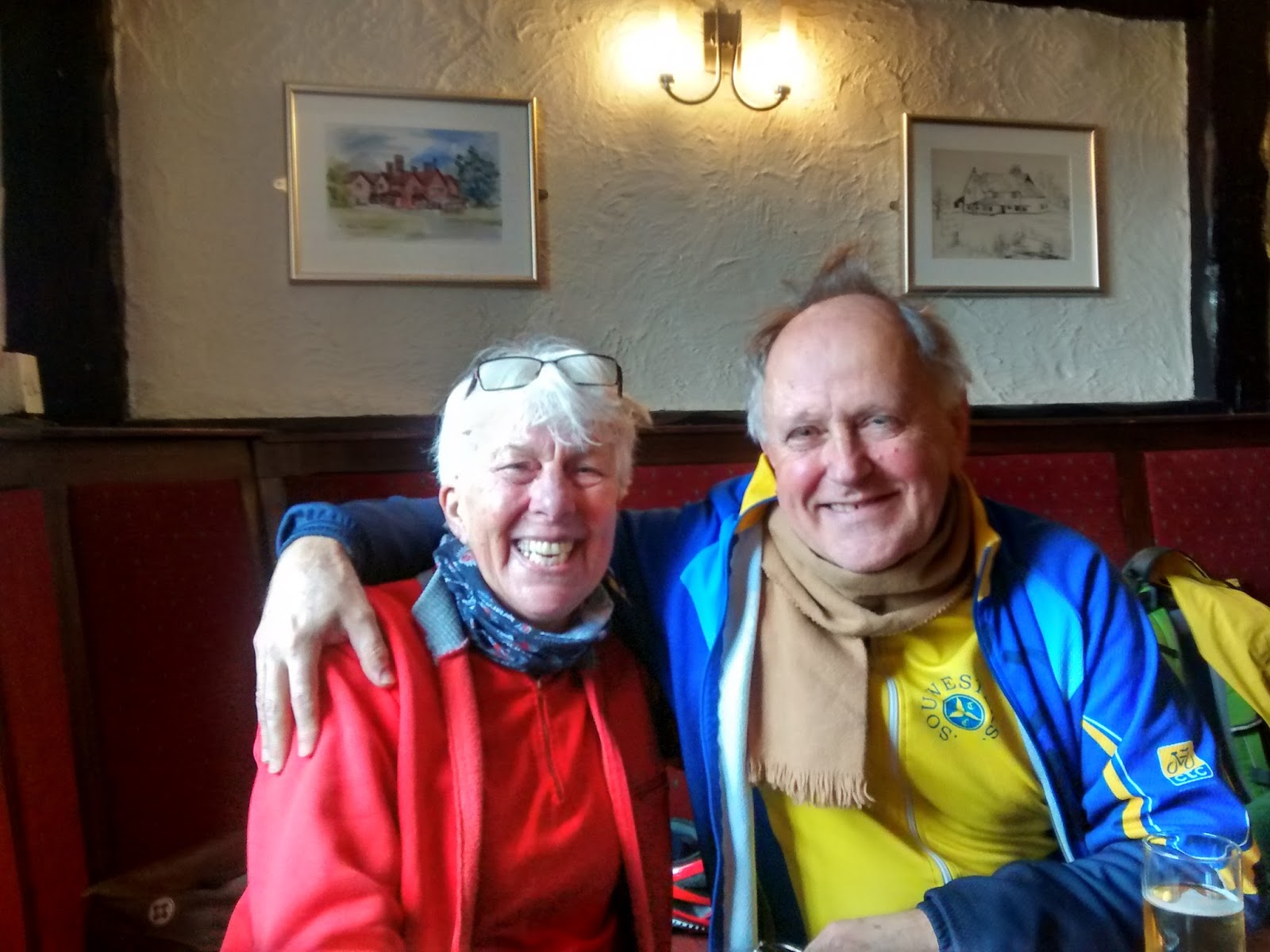 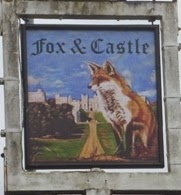 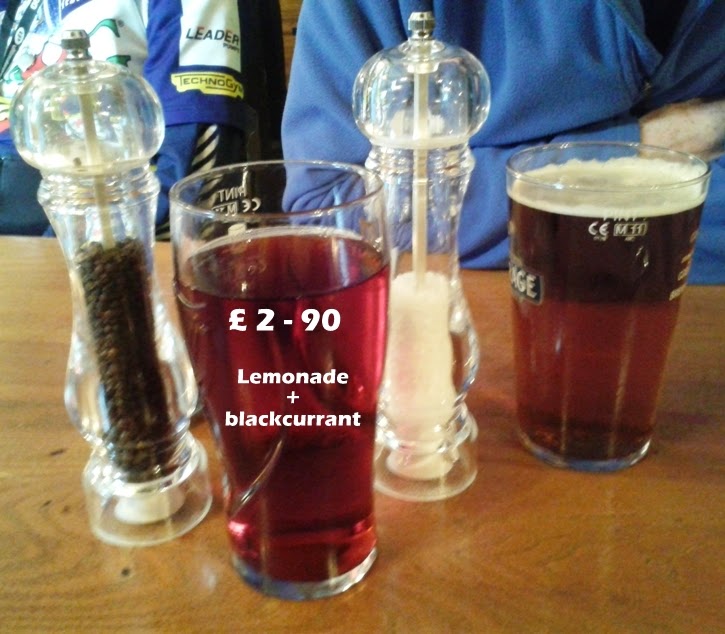 Has the Chancellor added a surreptitious stealth tax to lemonade or is this an example of RoB?

Tony's baker's dozen.  After an hour in a pub they look a very sober bunch!
Posted by Jeff at 19:15 No comments: 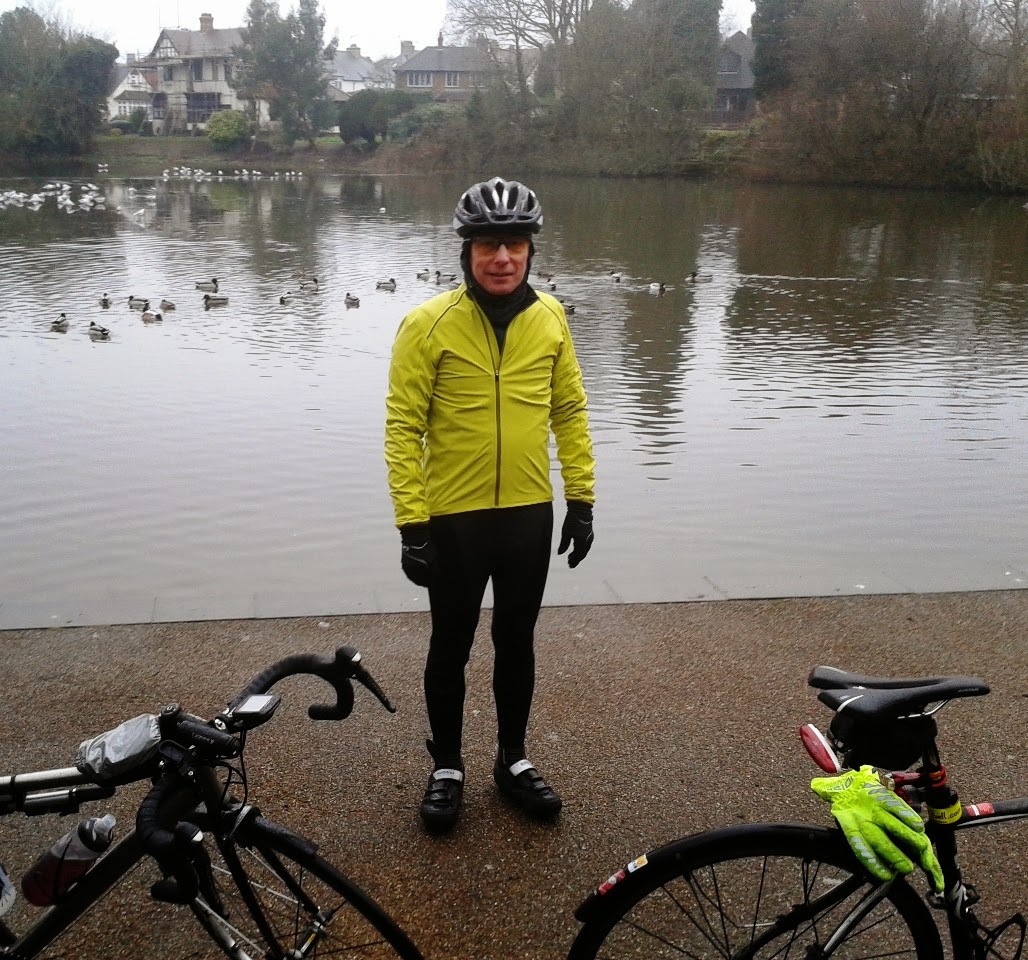 For Sunday the scribblers and twitterers of press and TV promised flood and permafrost, with birds falling out of the sky. Handicapped by their micro-memory-span, by midnight they had forgotten  their dire prognostications and stumbled on to their next mega-melodrama. In fact, the weather was normal; a faint drizzle with Walton-on-the-Hill  pond carrying a light glaze of ice in the centre and supporting a flock of water fowl. Dave Stott observed with interest. No Scott or Amundsen or Ranulph Fiennes appeared to join us. As Pebble Hill was closed again, we set off via the A217 and decided to forego a circuit of the lanes surrounding Reigate, in favour of a shortened trip to the supermarket. Lonesome Lane soon led us to the bad-lands of Horley and the misty minarets of Waitrose. 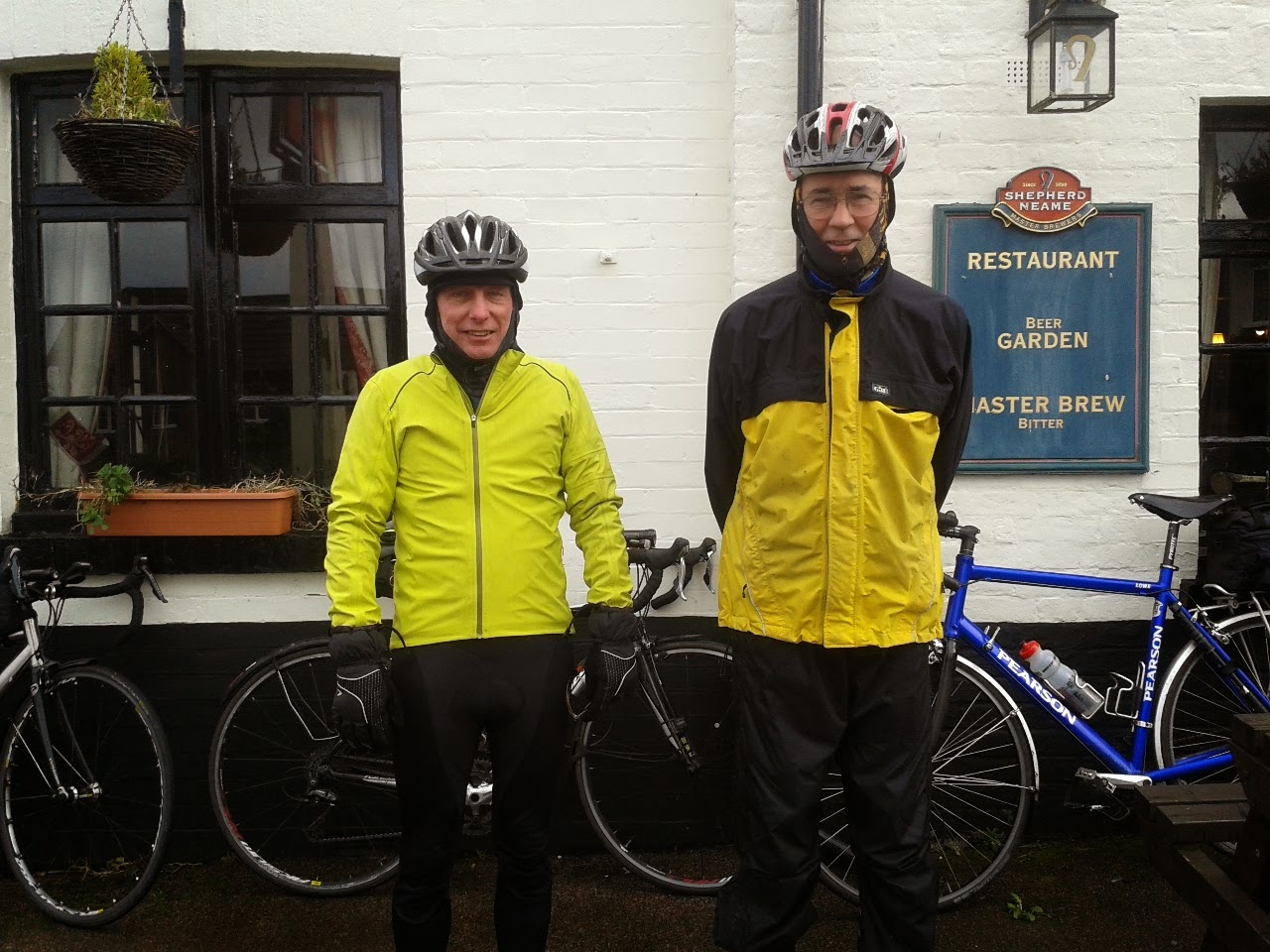 We settled in for tea and soon were joined by Terry. Our unanimous decision was: press on. So we did, but not before a swift hail and farewell by the cycle stand with Graham, who had cycled nearly thirty miles to pay his respects, before returning home, no doubt first fortified by a cup of tea on the house, thanks to his Waitrose Card. Beneath grey skies we passed through Smallfield to Effingham Park, through Crawley Down to Felbridge, downhill to Newchapel and N.E. to Lingfield. On the evidence of an earlier recce, however, our destination had been changed. The Cage Inn was boarded up and the Greyhound fodderless, the regulars clearly preferring it that way, with outsiders best kept outside. We therefore continued on to the familiar staging post of the Old House at Home.

We struggled to clear our plates, if not our tankards, and made a prompt departure as the Sunday deadline for last orders at Reigate Garden Centre café is 3.30pm. Do not believe the website. The sky now turned blue and a low sun demanded sunglasses as we rattled along through Blindley Heath and Horne, Outwood and Salfords, to arrive for tea with time in hand. Tea for all, cake for one and a departure still in dwindling sunshine as we made our separate ways home, mileage for the leader falling short of a half century. My thanks to stalwarts Dave and Terry for their welcome company. 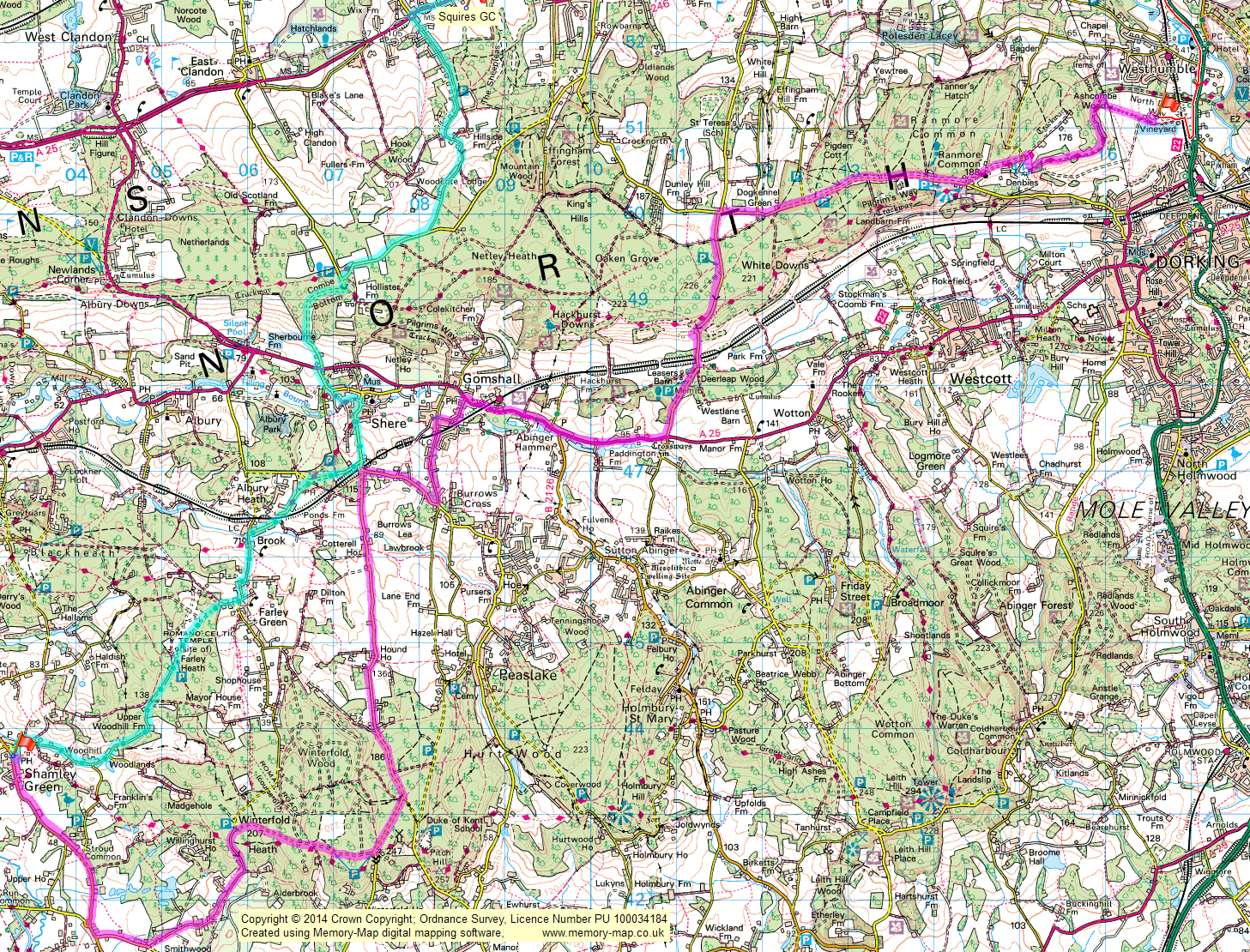 Thanks to Ray Wren for this map of Terry's Shamley Green ride
Posted by Jeff at 01:32 No comments: 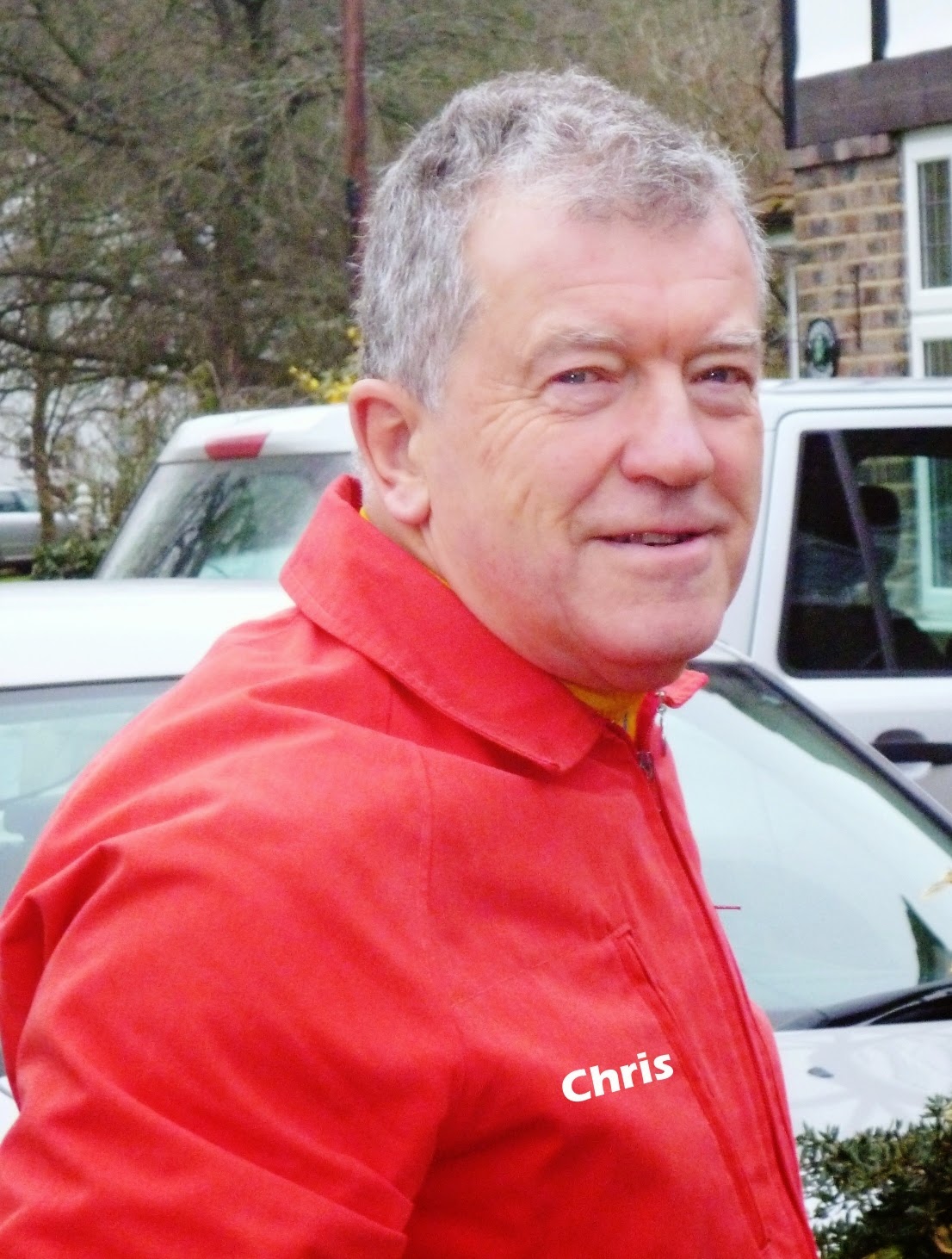 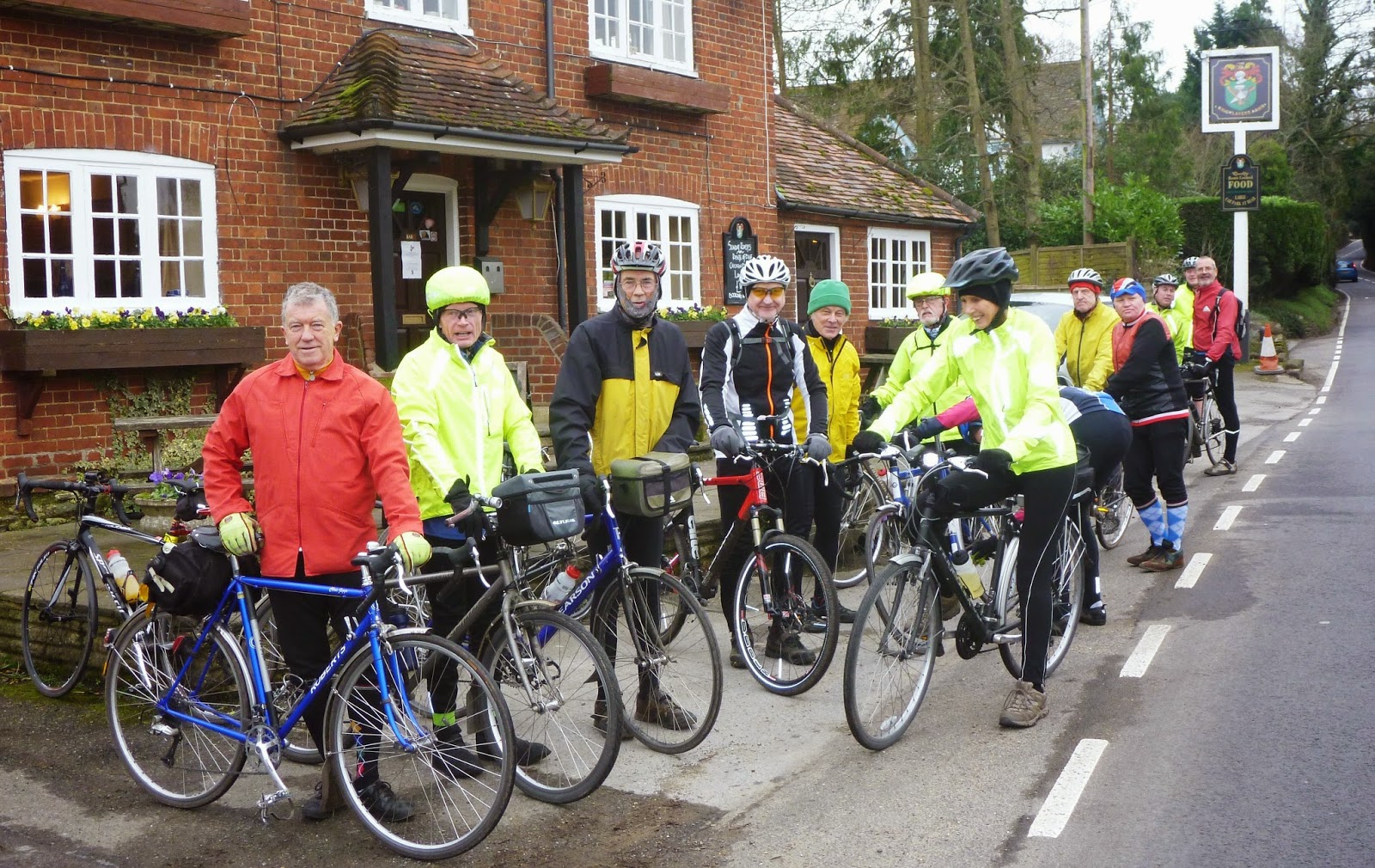 Terry-torial army ready to roll
Posted by Jeff at 23:19 No comments: 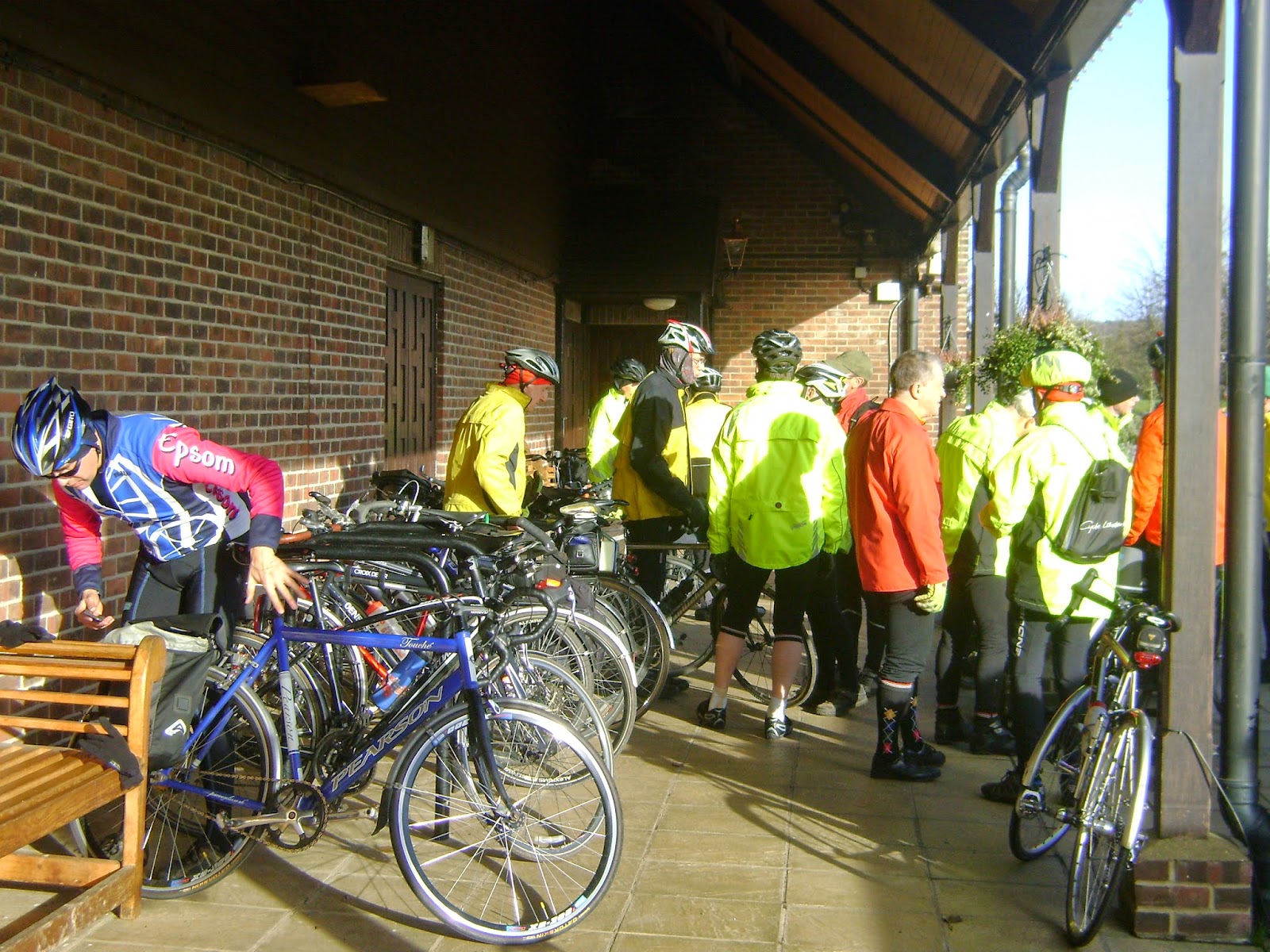 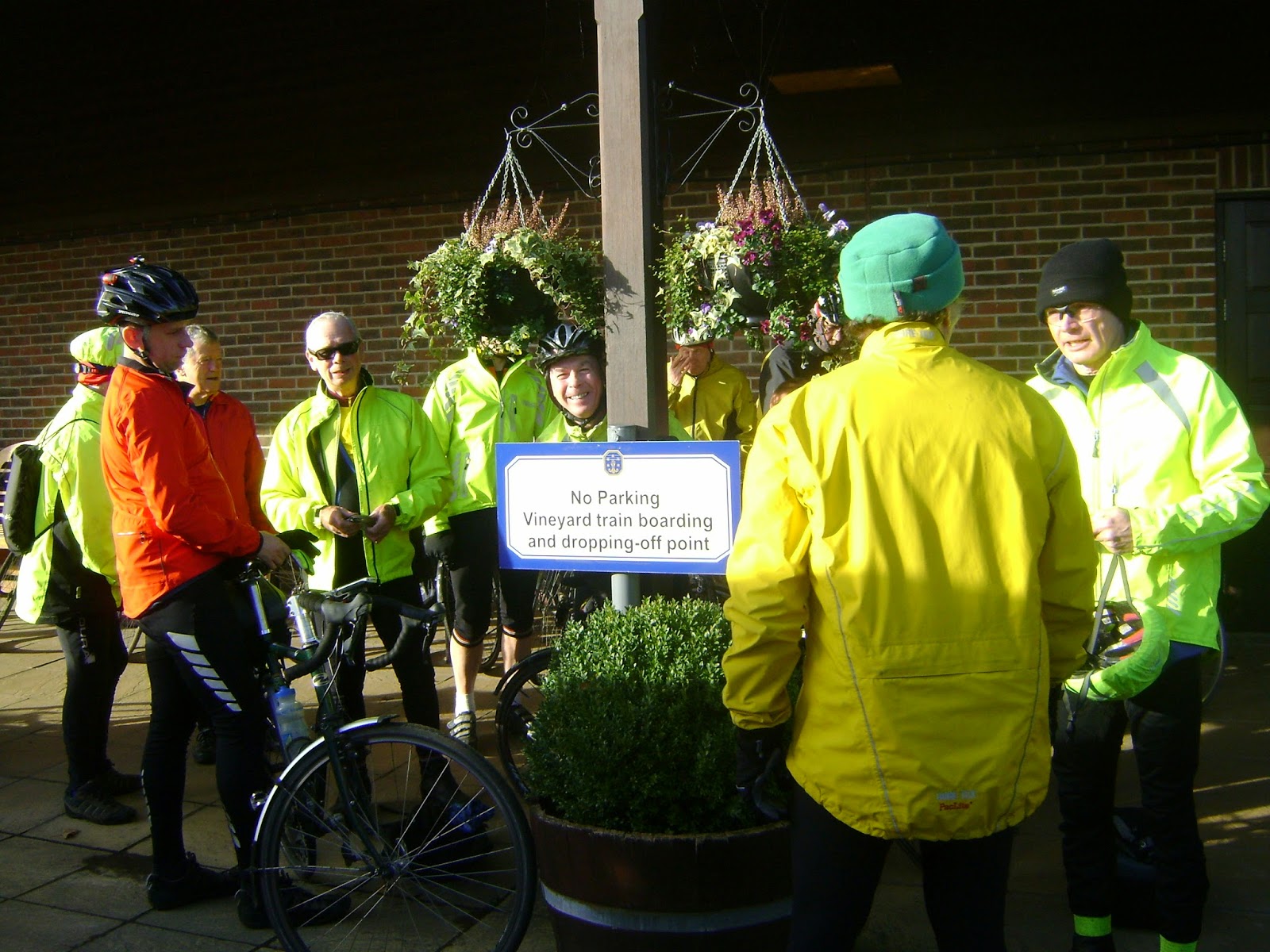 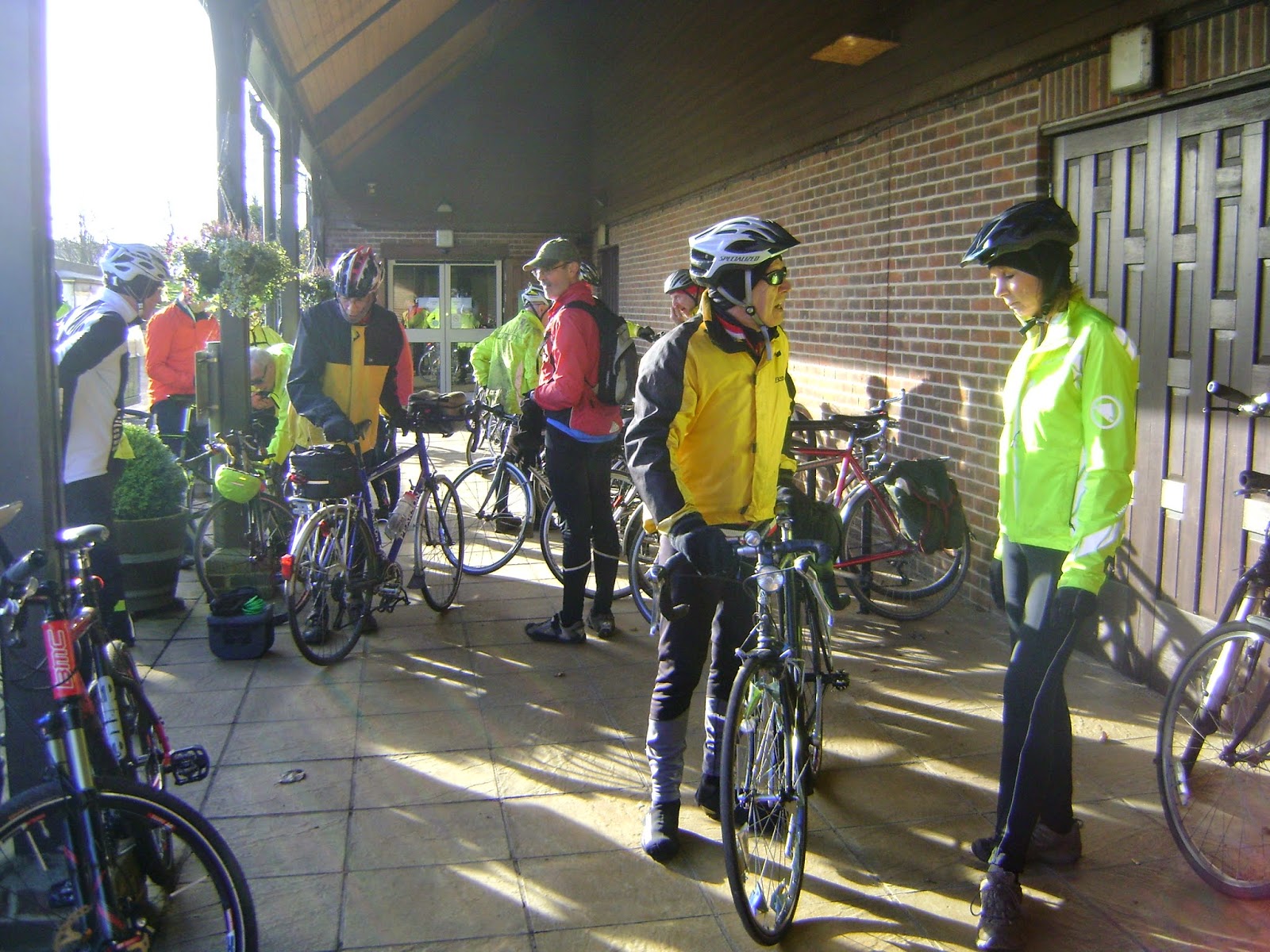 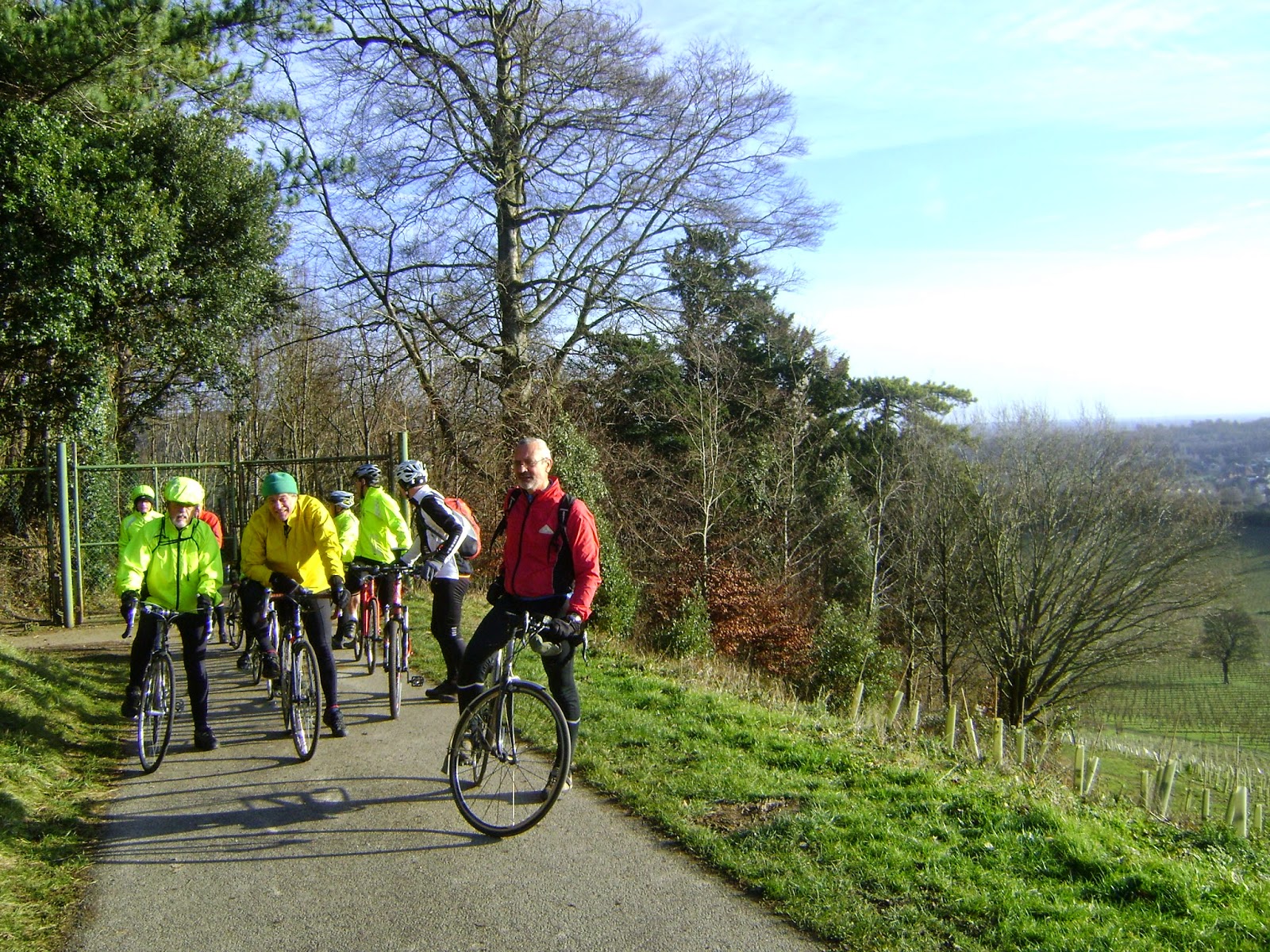 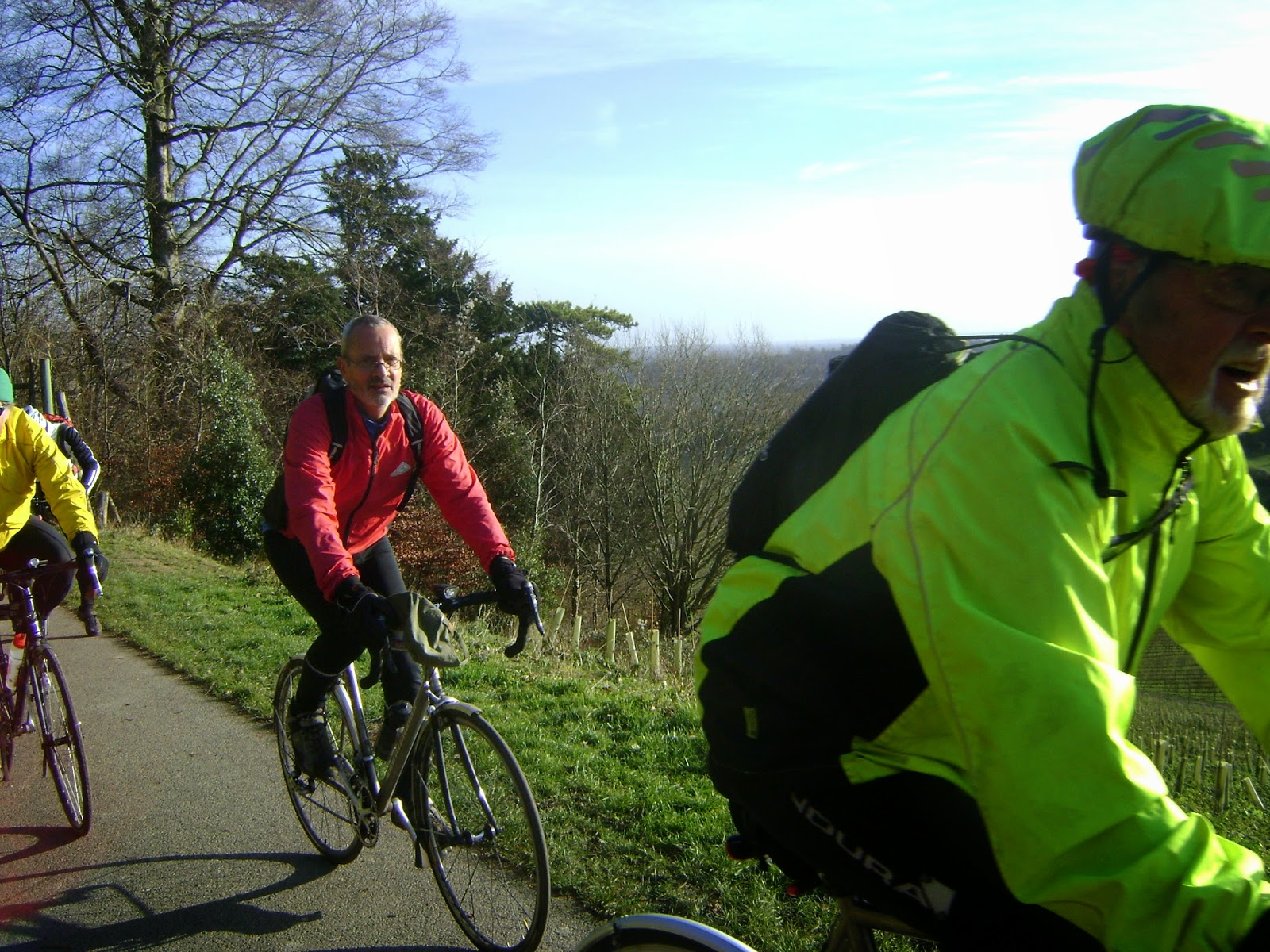 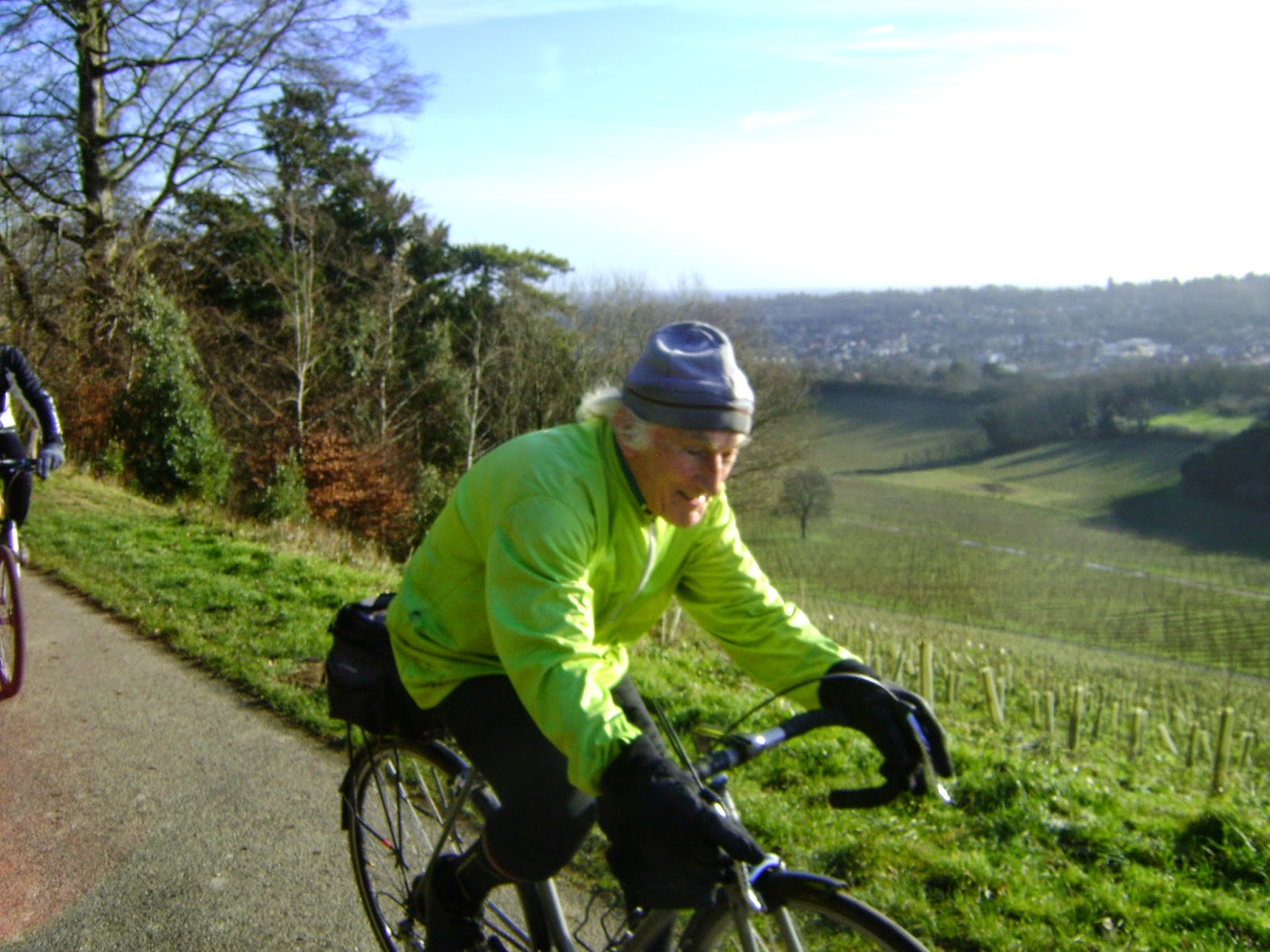 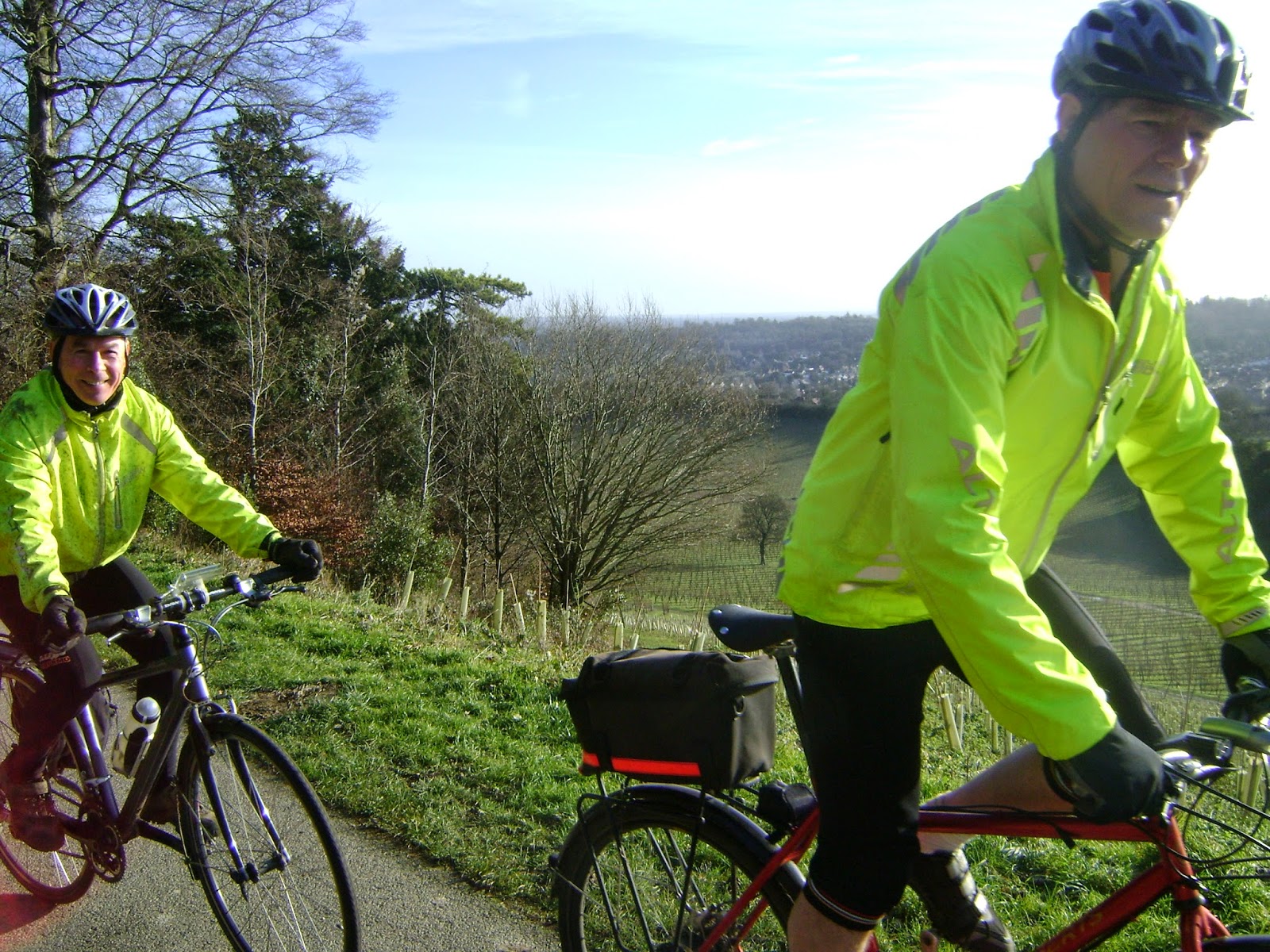 Posted by Tartan Socks(long) at 20:41 No comments:

A good turnout of about twenty-five (including guest Chris - hope to see you again, Chris) met at Denbies in bright, fine,cool conditions, with fifteen leaving for Shamley Green after 11s. Heading south from Dorking means hills, the first one being Ranmore with a choice of two approach routes. A brief stop at the top to confirm lunch nos at the pub and we were away, crossing Ranmore to descend Whitedown. Heading west on the A25 we turned into Goose Green in Gomshall leading to Burrows Cross and shortly passing Hound House whilst ascending Hound House Road. Having turned right into Winterfold Lane we soon turned right again into Alderbrook Road and enjoyed the unfamiliar sights of Winterfold Heath before cautiously descending to the junction with Smithwood Common Road, from where it was a short, flattish ride to The Bricklayers Arms.

Having had a good lunch we set off  after about an hour's break, following N22 to Farley Green and Brook to Shere, where we found an enormous traffic jam but managed to weave a way through to turn into the peace and quiet and ford in Lower Street. Here some chose to make their own way home. After crossing the A25 we had this afternoon's main challenge - Coombe Bottom , which was virtually traffic free. Turning right at the top and shortly left into Shere Road brought us to the lesser challenge of Peeble Hill from which we freewheeled to the roundabout on the A246. More decided to carry on homewards here, a handful turned right to Squires Horsley for tea but most carried on to get home before dark. Graham and I didn't and didn't.

An enjoyable ride - far more so than when I checked it out last Sunday - visibility then rarely exceeded fifty yards. Thanks to Graham and Neil for keeping an eye on things and to all for company. I rode about 43 miles door to door - I expect others did much more.

The forecast wasn't promising but apart from visibility being practically nil and temperature not yet reaching zero it looked like a good day for riding.
I took the shaded bridle path to the start point which confirmed conditions were not icy and arrived at Oaks Park to await the intrepid crew. Paul emerged from the fog first followed a few minutes later by Jeff.  No-one else had braved the weather and Jeff decided to potter so Paul and I set off into the mist.
We started with the gentle climb towards Woodmansterne then down Rectory Lane and through Coulsdon towards Farthing Downs.  The ride across the downs was not quite as scenic as my last ride there but we could see grass either side of the road. That led us to Chaldon then through Caterham on the Hill and down Burntwood Lane.  Next was the long hill climb to Woldingham followed by a fairly level ride along the Ridge and the descent of Clark's Lane to Westerham.
The Tudor Rose was full of cyclists but none from  Cheam and Morden so the two of us set off towards the lunch stop.  Visibility was nearly good by then.  We started North along the A23 then turned along Pilgrims Way - a route that seemed very popular with quite a few cyclists. Next we turned South and passed through the picturesque village of Chipstead.  A few more kilometres (and even fewer miles) took us through Otford after which it was just a gentle climb and descent into Shoreham.
Lunch was in front of a roaring fire at the Crown.  Apparently one of the regulars here is Reg Barnett who cycled in the 1968 Olympics.
After lunch we did the long climb out of Shoreham. After Halstead we were able to descend but then had to join the A21 for a few minutes. We branched off at Green Street Green and climbed Old Hill which was mercifully short. This kept us on a quiet lane though until we joined the  A2022 for the final climb to tea at Coombe Wood.
After tea I started my long 20 minute trek home while Paul headed to Sutton and beyond.  I did 51 miles - Paul would have done at least 20  miles more...........(77 actually,Ed). 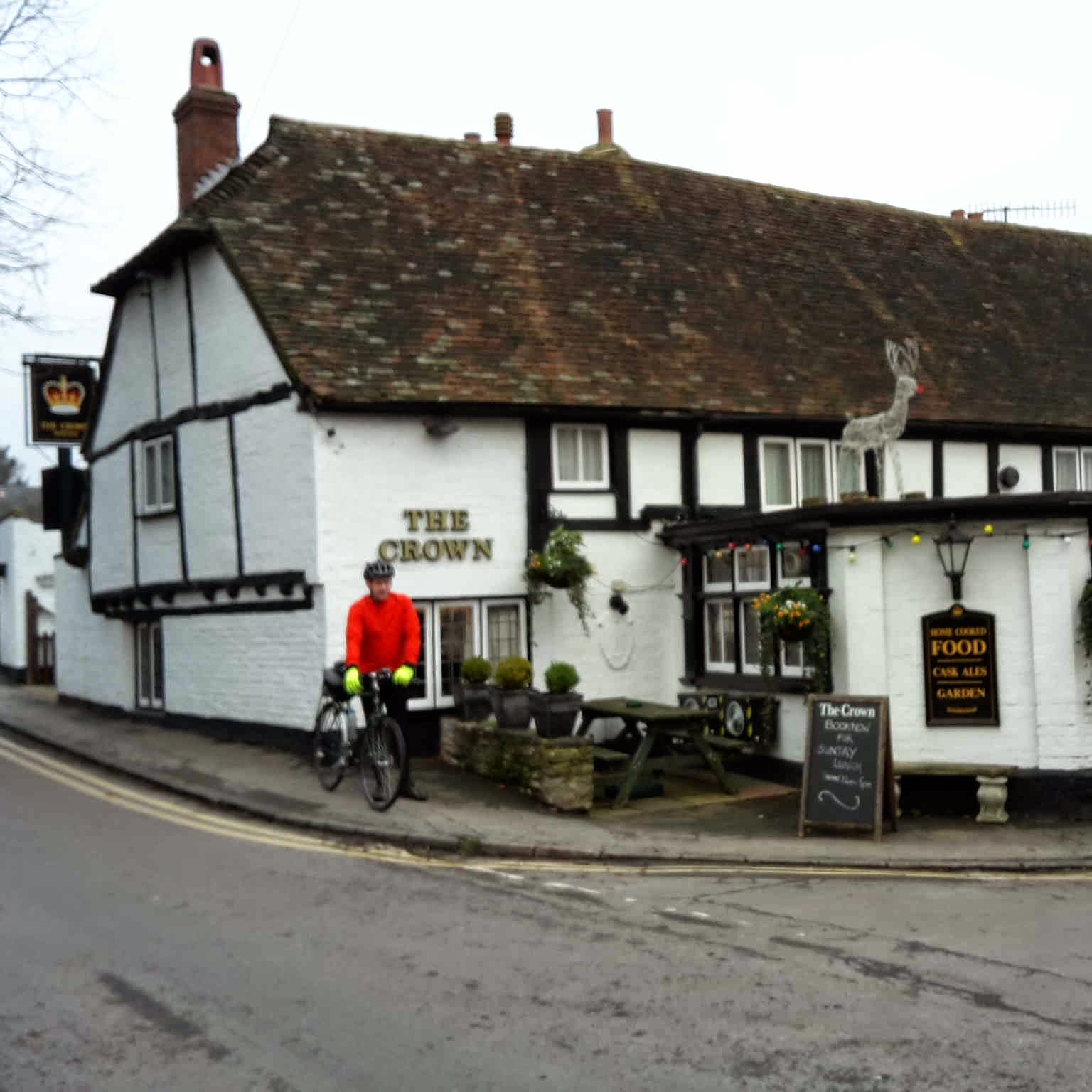 Posted by Tartan Socks(long) at 21:22 No comments: 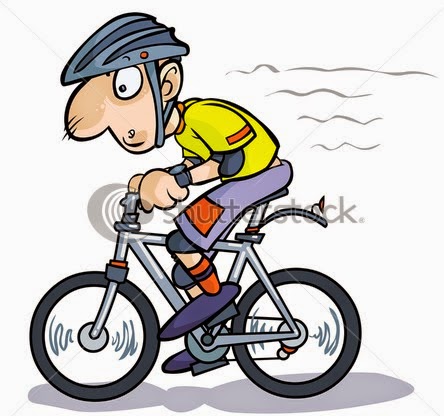 
With no more than four hours left in 2014, (well, there were when I wrote this), now may be the time to tot up your annual mileage cycled from 1st January to 31 December 2014. Mileage after midnight will count for 2015. Most of us take more than a passing interest in the number of miles that we cycle.  If you would like your distance pedalled to be added to our DA spreadsheet, please let me have your mileage for 2014 and it will be added to the record on the MWW blog. No metric distances please as I am an imperial man, however much Herr Junker or Señor Barroso may splutter.

The most widely travelled lady and gentleman might win a New Year's Honour if they top the list. There will also be an award for the rider with the greatest increase in mileage over the previous year. So get out you Cateye or abacus or whatever advanced technology you use and let me have the result. This need not be accurate to 0.01 of a mile, but in the event of a close call, validation may require enhanced interrogation techniques. The gongs will be presented at our annual lunch on the first Wednesday in March.

Thanks to our leaders for revealing to us pastures new over the past year and thanks to all for your fellowship and good company.

Happy New Year and safe cycling to all.

P.S. Email address is: jeff.tollerman@lineone.net
Posted by Jeff at 12:56 No comments:

In contrast to recent years, the warm but dull weather produced a bumper crowd at the Colicci Cafe Roehampton - at least 25 souls (C&M out all day : GH, TL, ES, DA, DS, LC; 11s only: PD, TH, AA, CB, etc). As usual I grilled Ed on his route; as usual I failed. Carters Tested Seeds (demolished 1970) got a mention so A3 then up into Coombe and Richmond Park via Ladderstile Gate will have to do.

Naturally I'm on firmer ground for the return. Eighteen rode across the park to Ham Gate then turned left into Church Road. After a brief dive into the bushes we arrived at the Grade 2 listed Parkleys Estate (1954-6, 'the most refreshing new housing in Surrey' though I sensed some didn't share Pevsner's enthusiasm). We reached the river via Hawkers (demolished early 90s) and continue alongside before turning north past the gasworks (remains being demolished).

After that it was pure suburbia: Norbiton Station, Elm Road, South Lane, Riverview Road and Pam's Way. At Ed's three Mitchells balanced those who had departed en route. Many thanks to Ed, Maureen and the Mitchells for a copious supply of food and drink. Around 25 miles door-to-door.
Posted by RaasayWarden at 11:27 No comments: