Elevenses on Sunday 1 March will now be at The Edmund Tylney, Leatherhead, and lunch will be at The Sun, Redhill.   As the crow flies, the distance between these two points is only about 10 miles.  Depending on the weather, and the wishes of the group, we will either take a short but quite hilly route through some delightful and little-visited lanes (via Walton-on-the Hill, Mugswell, and Upper Gatton), or else a slightly longer, more familiar route with fewer climbs, although not altogether flat (via Punchbowl Lane and Leigh).   The return route, via Betchworth, Pixham Lane, and Leatherhead, isn't too hilly, and has plenty of tea stop options.

Apologies for this change which is shown on the new rides list.   The ride originally planned for this day has been moved to 29 March.
Posted by David W at 08:01 No comments:

Having moved to Hampton the cycle ride to Squire's at Upper Haliford for 11's was short and,  considering the wind, welcome. About half mile from Squire's Carolin joined me.

As usual Dave was already there with his cooked breakfast chatting to Vic.   We were soon joined by Graham, Pam, Simon, Gemma, Ed,  Brian Bent, Steve Duffin and Paul Day.

Paul, Carolin, Graham and Ed had decided not to venture further and headed home.

We left 11's around 11.15 into a headwind which at times was gusty. We headed North through Ashford and onto Poyle, Colnbrook and across the M4 and the outskirts of Slough where the rain started and caused a brief stop to don waterproofs. Only another half mile and we reached our lunch stop at the red lion. By now the rain had stopped.

The food was soon delivered to our table ranging from a packet of crisps for some to full blown Sunday roasts along with dessert for others. Brian and Dave left lunch early to head home. Vic Pam and Gemma headed due South while Simon and Steve followed me eastwards.

Now with a tailwind progress was more rapid. At Cranford I turned South and crossed Hounslow Heath then onto the Crane river path. As we got to the Shot Tower it was a surprise to see it open, and so a brief stop to look inside. We were met by a very enthusiastic volunteer who explained the history of the Shot Tower, which in fact is not actually NOT a ShotTower as it is not tall enough for that purpose. We did however climb the spiral staircase to the top, see photo courtesy of Simon. 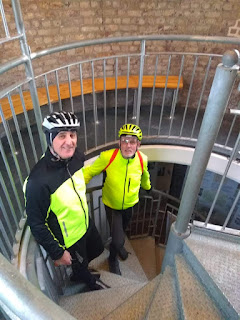 Just over another miles saw us reach tea at Squire's, Fulwell. Even after a full Sunday roast some still managed cake! After some enjoyable chat we all headed our separate ways home. Only 32 miles for me but very enjoyable and nice to be back cycling after time off the bike through injury and moving house.

The two Sundays I've been able to cycle so far this year have been named Storm Ciara and Storm Dennis.    Just my luck.  Here are some pictures from Pete Beyer of braver souls, the Tadworth Fat Boys, showing that they are hardier than myself. 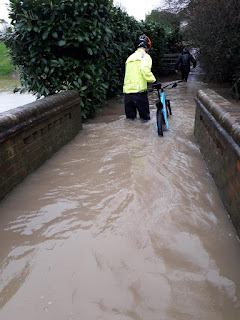 David Ward and I both made it to elevenses, him on a bike and myself part train, part bike.  The weather wasn't awful, just bad: fairly heavy rain showers, a strong wind and a lot of standing water on the road.   But we both decided that it would be more fun to ride on a different day, and caught the train home. 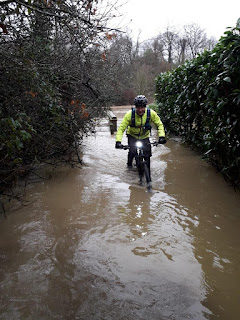 I have been made aware that there could be some weather this Sunday (again!)  The original plan was to ride to Eton, a ride that can be made longer or shorter depending on the weather.   It now seems that "even shorter" might be a better option.    So at least David Ward and I plan to turn up at Laleham (Notcutts) for elevenses.   We can then decide as a group whether do a very short ride, try and get to Eton, or go straight home.

I thought you might enjoy this video of the Hilly 50, which was posted on the C&M blog after the 2010 event.   Recognise anyone?

Storm Ciara failed to stop most of us from enjoying a delicious annual lunch, although only one brave soul (Colin Q) cycled to The Angel: the rest of us made our way there by inferior means of transport.  Unfortunately that meant there weren't many there to enjoy the delicious elevenses at Ann and Steve's - if you were there, there was more than enough to go round!   Nice to see everyone - and especially Ian and Lena.  Thank you to Pam for organising so well, to the staff at The Angel for delicious food and good service, and to Ann and Steve for hosting us at elevenses.

In view of the gale-force winds expected tomorrow,  Ann has decided not to risk riding to lunch tomorrow, so there won't be a led ride to lunch there unless it's an informal arrangement.    So the arrangements are as follows:

Elevenses still at Steve and Ann's, but Ann will be leaving at 11:30 to go to The Angel by public transport.

Please think carefully about whether to use alternative transport.  All of the royal parks will closed due to the safety risk during the severe weather.
Posted by Simon L at 15:08 No comments:

A sportive challenge. On Saturday 7th March join in the Sou'Westers' well-established Hilly 50 km event: 33 miles of the best of Surrey Hills and 3670ft of ascent, supported by route sheets and maps (available in PDF format), with GPX data for devices such as Garmin.  This is a challenging circuit starting at Ryka’s Café, Burford Bridge and finishing at the top of Box Hill. 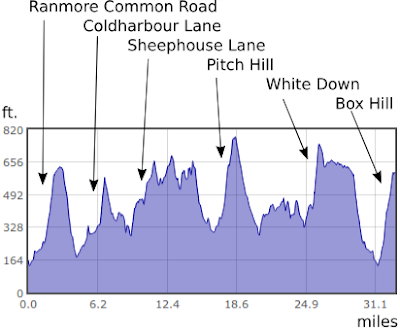 Pre-entry is preferable and can be made by visiting:  http://www.swlondonctc.wixsite.com/ctcswlondon/hilly-50k,
or Cycling UK events page http://www.cyclinguk.org/event/hilly-50km-2020

Follow the instructions to enter, or just turn up on the day.  Entry fee of £7 payable at the start and all proceeds will go to St. Raphael’s Hospice in North Cheam.  Signing on is from 9.30 am with a start time of 10 am to finish by 2 pm.  This is a challenging unsupported event and riders participate at their own risk.
Posted by Simon L at 10:41 No comments:

The first ride of my 76th year turned out to be unusually warm, overcast and far better than the forecast as the heavy rain ceased just after six. It left plenty of surface water on Ford Bridge Road but traffic was light.

When I arrived at Bourne Valley Garden Centre we were four but eventually ten turned up including three A riders. Terry rang to request a rendezvous: I said Rodboro 1230, Pam said 1245. Anyone familiar with my rides will recognize the route so this map should suffice. 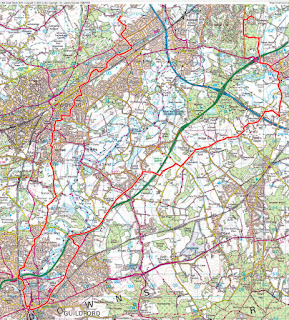 We arrived at the Rodboro at 1231 to find it full (the weekend only Brexit discount?). Later Bob rejoined.

Over a leisurely lunch I suggested we investigate a 1907 murder (google William Whiteley). We headed up the cobbles and along the A3. Pam, Terry and Vic split off as we turned after The Jovial Sailor. An oncoming MTB'er forewarned of floods along Plough Lane so we rode via Downside into Cobham. After Notre Dame and Seven Hills a right into Whiteley Village brought us to the "new" Harvest Cafe which lies in the NE quadrant of the octagon. We trebled the number of visitors at the start of our hour plus stay but when full it probably seats 40/50 in comfort. I can't comment on the cakes as few if any were on view.

About 50 miles door to door.