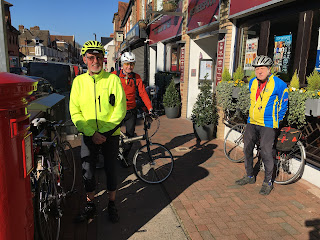 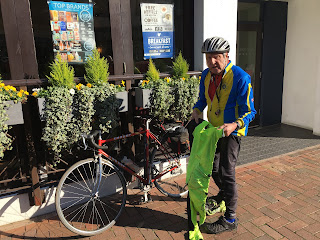 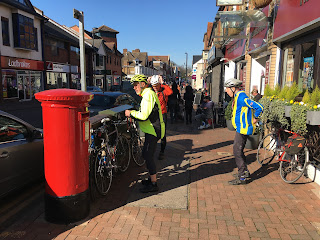 It was a very nice day to be leading a ride with better weather than most of my Sunday rides last summer!    Tony, Ed, Ray W and I left Carolyn and Bob at Fairoaks and set off towards Bagshot via Pennypot Ford and Windlesham.   Then it was the long grind uphill to the Jolly Farmer roundabout before we picked up Middleton Road, a quiet, narrow road, almost a country lane, which led us virtually into the centre of Camberley.   After a relaxing lunch at the Claude Duvall we found Brackendale Road, another quiet, sinuous and tree-lined, dead end road starting very near the centre of town and leading us out to the south.  We crossed the M3 on an impressive triple-ramped footbridge then ducked and dived through backstreets to The Maultway and the sharp drop down Red Road which took us back to Lightwater and Windlesham.  The plan was for tea at Holloway Hill but at Chobham Ed decided he would like to return via Woking so I offered to lead him there and we parted company from Tony and Ray.  Thanks to everyone for a very pleasant day out in the sunshine.
Posted by David W at 17:08 1 comment:

No changes are planned from the ride as advertised.   Just a reminder that the cafe at Fairoaks can get very busy, and, as I plan to set off as soon after 11.00 am as possible,  and certainly no later than 11.10 am, please allow plenty of time to procure your beverages and comestibles!

For anyone wishing to return home from lunch by train, the Claude Duvall is temptingly adjacent to Camberley station.   Trains will be running to Camberley tomorrow, but, unfortunately, engineering works at either end of the line (Guildford and Virginia Water) mean that it would probably be better to return from Brookwood, which we will also pass near about 30 mins after leaving lunch.

Having left Maureen and Bob at the Musette (vegan for the day) cafe, eight of us headed for Rusper. From the top of Cotmandene we could admire the view, watch a local exercising his rights by hanging laundry on the green and wonder how cricket could ever have been played there. After a short stretch of the A24 we turned into Chart Lane South, the good freewheel stopped by turning into Punchbowl Lane and passing the gin factory (no free samples). Tilehurst Lane, Roothill and Brockhamhurst Road led to Leigh and Norwood Hill. (Now the Time Well Spent chain no longer exists the Fox Revived has undergone changes and has gone 'up-market'). Taking Ifield Road out of Charlwood we soon passed The Gate, now a private house but a few years ago it was a public house of the same name. Soon we arrived at Rusper, destination The Star, where we were served good food pretty quickly. Ed and Graham had chosen an alternative route and soon joined us. Observant Wayfarers will have noted we included three freewheel competition hills in this route, unless they were busy admiring the many crocuses and snowdrops.

A direct route to Dorking was planned and it was thought a good idea to check on the menu at Henfold (elevenses are there on April 10th). Pete B enquired and emerged with the good news that we can be catered for if we give them notice. We all appreciated the resurfaced road from Newdigate to Four Wents pond. Threes were at Denbies but as we left the sky looked somewhat  doubtful, hope you all reached home dry.

Thanks all for your company, hope you enjoyed the ride on a very pleasant, sunny day. 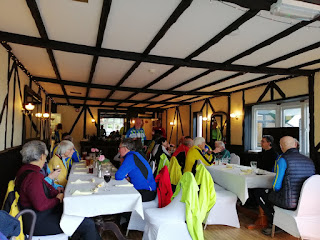 Making merry.
Posted by Tony at 13:52 No comments:

We had eight brave riders turn up at Effingham Vineries for elevenses, but only four for the rest of the ride. It soon became apparent on climbing up to Ranmore that the minor roads were extremely dangerous. I think Torvill and Dean would have been more at home up there.

Once up on Ranmore we decided to head on to the Royal Oak at Brockham Green for lunch. (Whitedown, I later found out was closed anyway).
The road down to Westhumble was also sheet ice, especially on the bend at the top, so that involved another walk.
All in all a very challenging ride.

Thiis year it is South Bucks turn to host the Joint ride. Th date will be the 5th of May and the general area will be around Denham.