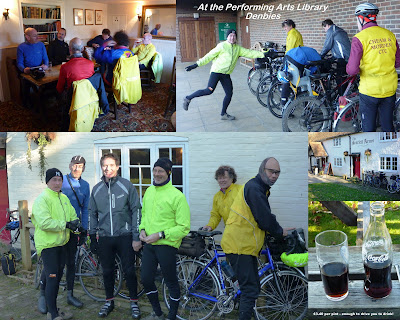 Today I was short of energy especially on the uphill stretches so this is a report from the distant rear.

For reasons that may be obvious, I won't name the nameless one but he did lead two from Cheam. The infamous you know what was draped in black so it must have been cold; the sun though out making little impact. Our route was an obvious one though why we went round the back of Waitrose in Banstead escaped me. Up to Chipstead and along carried us back to the A217 and the long plunge into Reigate. At the other end of Lonesome Lane lay 11s round the corner from Planet Sweet but affiliated.

A magnificent seven rode west towards Charlwood but not before an M-reg BMW lowlife threw something at Peter the Large; naturally it disappeared rapidly when confrontation seemed possible. Over the hills we went to Newdigate which was entered beside the church. At the Weare Street turn-out the road was blocked by three police cars and two ambulances. They let us through; a figure in shock lay on the right hand verge and covered in foil so little more can be said.

The Scarlett Arms was crowded apart from one room heated by four candles but plenty of room for us. Most settled for the Starter menu and extended banter with the waitress. Across the road the big boys' toys are gone replaced by far less interesting carbon fibre so still a racing concern.

After odd patches of ice in the morning, no chances were taken on the return. A29 and A24 got us to Dorking Town Centre and Denbies where Ed was waiting.
Posted by Anonymous at 19:28 1 comment: 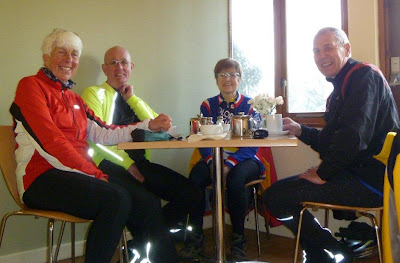 The four of us, Irene, Alan, Tony and myself had a real nice day cycling around the Berkshire countryside. We made our way to Dorney Walled Garden for our 11s's, then to Jealotts Hill, the New Leathern Bottle for lunch - a HUGE baguette and then tea at Irene's! What a treat to see the sun to-day! Not too many miles for me but I believe Tony was somewhere between 60+70! Pam :) 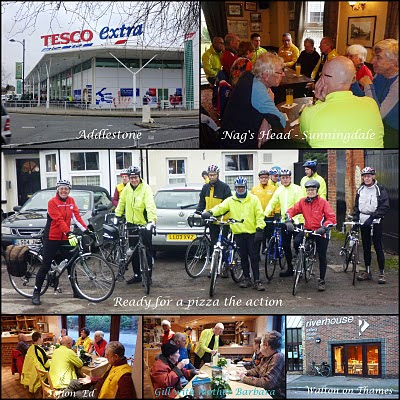 For a crow this was less than thirty miles but I stretched it to just over fifty. A call late on Saturday reminded me that Addlestone didn't officially open until 11 (actually 1035) so eight of us including two newbies went on a tour of the Royal Borough. We inspected Surbiton's Alpha Road (still? the roughest place in town) followed by roads more befitting its Victorian tag of "Queen of the Suburbs"  - now disputed by Ealing of all places! After the site of Gorbachev's last burger we climbed up to the Esher crossroad and descended past Sandown. Here Francoise performed a puncture with quadruple chain twist! 45minutes later the Humphreys were pointed in the direction of Esher station, and the blackened Ed and Ian were ready to continue. Naturally my hasty revised route could be discarded and the quickest way to Addlestone saw us arrive by 11 despite closed gates at the station.

Suitably refreshed around 20 willing souls now cycled onto Liberty Lane (you can guess the rest) and into  Burrowhill. Here excessive chattering in the ranks was rewarded with (a not so) Steep Hill. I was relieved to discover that there is still a footpath in Poplar Avenue Windlesham so we rode into South Ascot across (not on) the A30. An oddly named Dry Arch Lane opened the door to Sunningdale and the Nag's Head dead on one o'clock. The menu stretched to one item - pizza (divers toppings) served one at a time at six minutes intervals. Not a problem and one hour later we were on our way to Blacknest gate and soon slaloming through the Sunday hordes to Savill Gardens. Prune Hill and Thorpe Green (via Hurst Lane) kept them guessing but in Lyne I punctured so the ladies were commanded to lead the flock to a revised teastop, the Riverhouse Gallery Walton. At Walton Bridge something caused the flock to scatter unexpectedly - silly sheep; no fault of the shepherds (I was later informed). Nine (eventually) lingered until closing time at the new venue (you know who's only complaint was the size of the cups).

Postscript from Francoise and Frank

We managed to ride back home via Hampton Court admittingly in a leisurely way. THANKS to Ed and Ian for their heroic efforts at trying to fix the problems and to everyone who so patiently waited for us.
Posted by Anonymous at 23:31 2 comments: 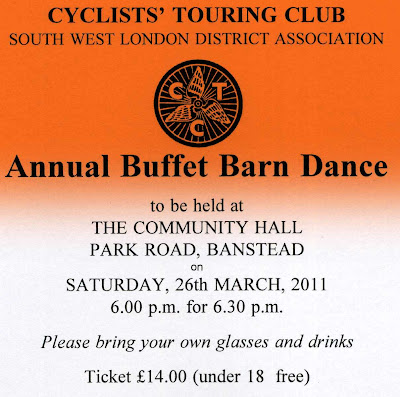 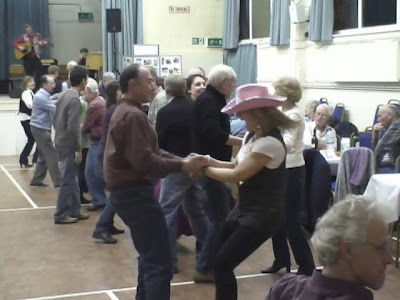 Tickets Now Available
Posted by Pete at 06:59 No comments: 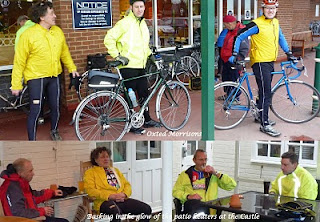 Graham, John G, Keith, Andrew and I set off from North Cheam on a windy day, heading for Oxted. We followed a route that I had set up on my Garmin sat-nav through Banstead, Chipstead, Woldingham and on to Morrisons. The 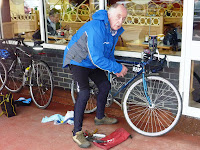 re we met Mike Morley, Ian Appleton and Jeff. There was now an unscheduled Dr Bike session, as Mike M's rear mech. cable had given up the unequal struggle en route. For some reason, despite encouragement, he was unwilling to spend the rest of the day on the smallest sprocket. Ian produced a suitable cable from his horn of plenty and Mike then carried out the necessary embroidery.
Andrew and Mike F left us here as we set off for the Bell at Outwood on some lovely, quiet country lanes. We bypassed Old Oxted via Woodhurst Lane and Spring Lane to go through Crowhurst, Blindley Heath, and Horne to find the Bell very crowded with nowhere to sit. A unanimous decision took us swiftly to the much more welcoming nearby Castle at Wasp Green. After lunch, the group decided to forego the temptations of Annie's ample welcome and part company, with each taking his own way to try and reach home before dark.

Today I had a rather disasterous day going to Oxted over Chipstead and Caterham, my rear gear cable snapped and put me in the small sproket I had to walk the odd hill. On arrival at Morrisons I started to fit a new cable but then realised I only had two brake cables in my saddle bag! Ian Appleton came to the rescue with a spare gear cable. What a remarkable man. Young Paul led the ride and a right song and dance it was too, quite a pace guided by his "Garmin" and occasionaly prompted by Graham H & Jeff.Well done Paul!
From Mike Morley
Posted by Pete at 15:58 No comments: 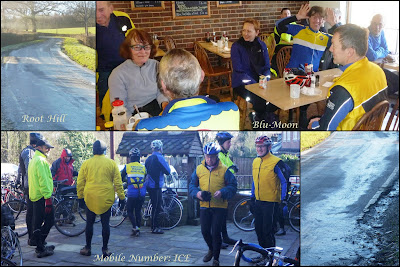 God speed to the daring dozen who undaunted carried on to Albury.
Posted by Jeff at 23:37 1 comment: 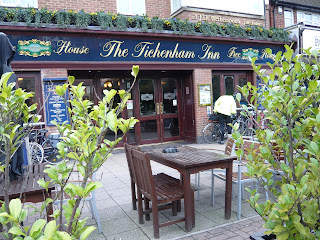 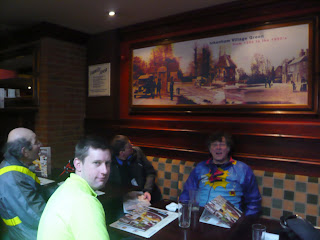 Anyway,Paul & myself set off toward Osterley Tesco's arriving in record time.....10.10am.
Bob was there as usual with Dave & Graham arriving shortly after.
With the help of TFL's cycle maps it was basically a ride northwards to hit the A40 at the Polish War Memorial,then west on the cycle path adjoining the Western Avenue to Hillingdon tube station then a short ride north to lunch at Ickenham's W'spoons.
The return was via quiet residential roads and the Grand Union Canal to Hampton Court for tea.
Posted by Tartan Socks(long) at 19:45 No comments:

A slight drizzle found over 18 riders at Ewell Village to welcome the New Year. First puncture of the year was claimed by Jeff. A steady meandering pace with regroups at various places on quiet tracks through Ewell Court & back roads to Richmond Park & the Roehampton Gate Cafe heaving with customers, our numbers rose to over 30 and so back to Ed Sharps for Chilli con Carni and Rice plus Eds special cakes. A video presentation of all 2010 Blog pictures plus Jan 1 2009 Video ended the day.
From Pete M
Posted by Pete at 17:46 No comments: