May Day to Fingest Change Of Start Time

The total distance is about 80 miles at a steady pace. That's rather too many for early May so don't come expecting unwanted climbs or lengthy refreshment breaks! Unusually we'll be going clockwise so Hambleden Lock in the morning and Marlow in the afternoon.

Like many pubs in the Chilterns, The Chequers in Fingest is an eaterie. For those who can't survive all day on a starter, Marlow has at least two supermarkets.

Posted by RaasayWarden at 07:56 No comments:

A summary of Dave's ride.

There were 3 at the start and 7 at Sunningdale. Paul headed for home as we set off the opposite direction round the back of Windlesham and into Lightwater and up the climb spurning Red Road for much of its length. We then enjoyed the long long descent into Deepcut and Mytchett before turning west to a quietish Tilly Shilling in the centre of Farnborough. After lunch Dave's west, north and east through Queen Elizabeth Park saw us to Farnborough North and its two level crossings. The lunchtime vote for tea was Addlestone which was reached via Pirbright, Knaphill, Chobham (and windowless Castle Grove), and Burrowhill.

About 60 miles door to door. Chilly but bright with just a few spots of rain after tea.

With Warlingham for 11's being 23 miles cycle for me and around 33 for Pam and Irene, plus the fact I hadn't clue how to get there an alternative was on the cards. So Pam's reccy ride to 11's at Savill Garden saw Ed, Irene, Pam, Ray Wren and myself (5) arrive in good time for refreshments.

The lunch destination was the Green Man at Hurst. Through the Great park and the Peanut, Maidens Green to Moss End and onto lunch. Although Sunny there was a chill in the air that made it worse by having to sit outside. We were soon served our children's portions, mostly sausage and mash, followed by a scoop of ice cream (included in the kiddies portion).

A wrong turn saw us on the dreaded Drift road back to the Peanut and on to tea at Notcutts GC Laleham. A nice day out in the saddle.

The meeting point this week was the Amano Caffe in Warlingham. The weather was dry, the sun was out but come eleven o'clock there were only four of us there. Were the others still winching themselves up the hill? Were they put off by my reputation for wet rides? Who knew. But we waited while Jeff finished off his bacon sandwich before he headed off home for domestic duties.

That left me to lead, Dave S to backmark, and Janice to be the rest of the peloton.

As we were already at an altitude of 600 feet it would be downhill all the way to lunch. Well not really. But it was downhill until the next uphill section.

We headed off through Chelsham before dropping down into the valley and up past Beddlestead Farm to the top of the North Downs ridge. Passing around the edge of Tatsfield we reached Hawley's Corner - at 800 feet the highest point in Greater London.

Another long downhill section (followed by a short uphill bit) led us to Cudham, before more (mostly) downhill roads brought us to Pratt's Bottom. The roads had been quiet, the bluebells were in bloom in the roadside woods, and the sun was shining as we arrived at The Bull's Head.

Food was promptly served and we were on our way within the hour.

A brief loop north of the A21 to Green Street Green gave us a short hill to warm up the legs and a tour of large houses of various architectural styles. Next we climbed up to Downe and then down towards Keston before heading south to Fickleshole. From there Chelsham, Warlingham and Bug Hill took us to Woldingham Garden Centre for afternoon tea.

We then all headed off to Burntwood Lane for a hilly ride home.....
Posted by Neil C at 00:32 No comments: 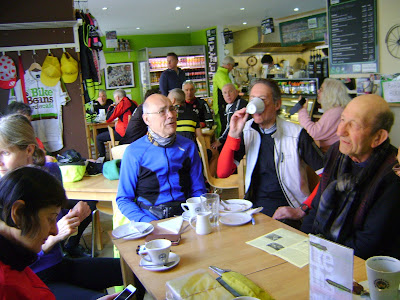 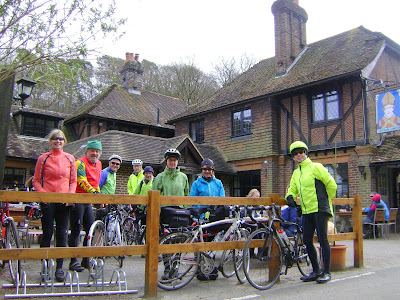 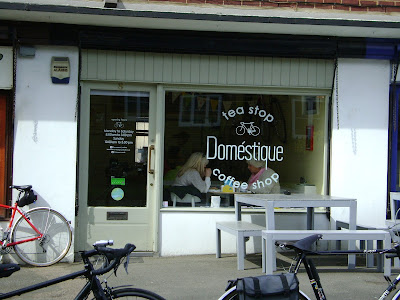 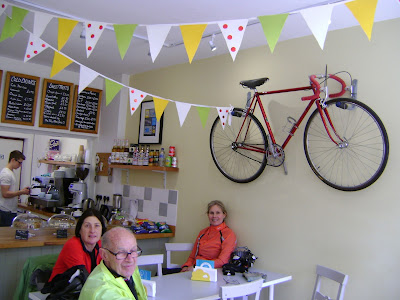 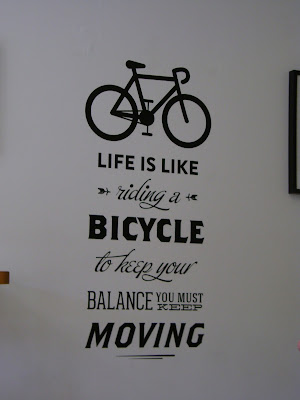 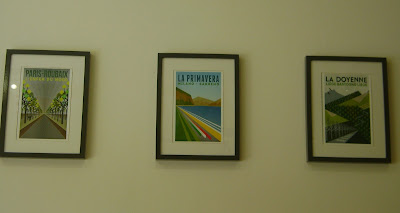 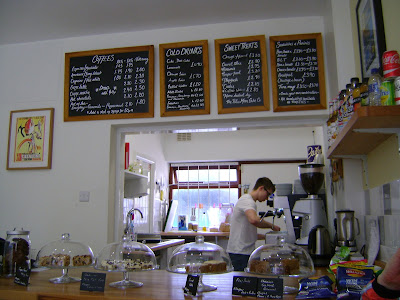 A new formula of ride today.
Basically short in distance but with more climbing than would be normal for a typical Sunday clubrun.
In part this was to allow for my mood changes associated with insomnia and visit a "new" cyclist's cafe at Bookham,which had a closing time of 3pm.
Although I was groggy in the morning,I had perked up by the afternoon.
The ride from Ashtead was via Headley and the wonderful Lodgebottom Road/Headley Lane to Rykas.
Past Chapel Farm and the ascent up to Ranmore.
White Down Lane to the A25.
Past Abinger Hatch to the triangle then Friday Street to..................Stephan Langton, Friday Street.
It was 12.20pm.The sandwiches looked tasty served on a wooden board with crisps and salad.
Ann returned to her bike to find a flat tyre.It was 1.30pm and I was aware that we had to push on so regretably, we left Ann & Steve to possibly meet later.
It was down to Ray, Janice, Lillian and myself to checkout the tea stop.
It's easy to miss.........around the corner from the parade of shops on the south side of the A246.
I was impressed for such a tiny cafe.
Friendly guy with possibly his girlfriend welcomed us.
Nice selection of cakes.
When I asked why there was limited publicity (it's been open two years) I was told Brian, the owner doesn't want hoards of cyclists because there is simply not enough room.

A fine day with a moderate easterly felt on the return.

Aldi has limited cycling featured this week.
Unlike Lidl, Aldi can deliver via their online site.
I ordered a Garmin Edge 25 (£109.99 at Wiggle) safely arrived today for the very reasonable sum of £79.99!

The day gave a hint of summer and might be described as eventful. Seven became eight on the Middlesex side of Kingston Bridge when Janice appeared after mistaking the start (HC). We took my  route across Bushy Park to Hampton, Hanworth and Ashford before starting a sort of 'Genevieve' trail near Vermeulens. In Poyle we had to edge nervously past a very skittish horse and trap and another more docile in Colnbrook. The obstacles grow ever more in Hollow Hill Lane but it remains passable (just). Soon we were in Langley Park where I spotted a muntjac moving too fast for a more accurate description. Most now crossed the A412 into Black Park, a roughstuff manoevre missed by two backmarkers. Being less than 1/2 mile from the cafe, no harm was done.

Amongst the six already seated was the Trencherman on a rare trip south. As the crow flies, it's less than six miles to lunch so we rode north to the ford (yes that ford) and Fulmer. After heading west to the now demolished One Pin PH (yes in that film) we plunged down into Hedgerley and along Kiln Lane and into the Portman Estate. This brought us to the busy A355 where a motorist halted traffic to allow us to cross. We then followed the western edge of Burnham Beeches to Dorney Wood and Burnham where lunch awaited (or so I thought). From past experience I'd not phoned the pub (bad idea) and today there were 75 guests for a christening! Fortunately T***o Express was open and not far away. We were now back to 13 as three rejoined having been detached at 11s; Bob (by arrangement), Daniel (who'd shuddered at "offroad") and Don (who'd joined up with Bob).


By popular vote, we settled on Notcutts Laleham for tea reached by way of Dorney, Eton, Datchet and Wraysbury. About 55 miles door to door and home well before five.


Posted by RaasayWarden at 20:27 No comments:

1. The Plough and Attic Rooms, pub at Rusper reopened before Easter.

2. Stretches of Weare Street have been resurfaced.

3. Henfold rebuilding plans are (still) with 'the authorities'.