Eleven arrived at The Dabbling Duck in Shere and sat outside with fingers crossed hoping for a dry ride but they were to be disappointed. The heavens soon opened and we tarried until after 11.30 while the worst of the weather passed. 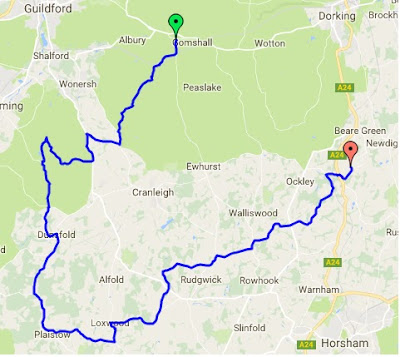 As we cycled along this road we were treated to glimpses of the Red Arrows as they performed their display for the Wings and Wheels event at Dunsfold Aerodrome. Sorry no photos, they were just too quick.

Turning south again we passed through Hascombe, Loxhill, Dunsfold and Plaistow before arriving at The Onslow Arms in Loxwood. The damp weather meant it was very busy inside but after a short wait for tables, and a longer wait for the food, large portions of wide range of meals were served. 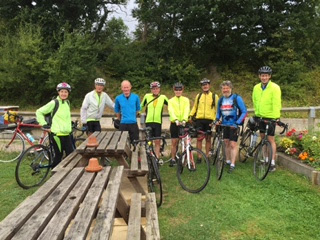 It was about quarter to three before we left and some were concerned that the cake may run out at Capel so a fairly direct route was taken via Tisman's Common, Oakwood Hill and Weare Street.

We should not have been concerned as there was still enough to feed the 5000.

August 21 2016 An Alternative Tour Of The Surrey Heights

First a confession : I went to bed expecting rain but awoke to dry roofs, overcast skies and an obvious breeze. Had the forecast weather arrived or was it still to come? No idea so I opted for the train (as did others).

Thus four reached The Snooty Fox together; a real find and clearly popular with locals/not so locals. Six had already arrived with Dave and Don tucking in to full Englishes. When Ray showed up we were 11. As usual Bob and Don headed home whilst we set off of a roundabout journey to lunch. Main roads got us to the crematorium then came Farncombe's backstreets. After the level crossing re-opened, we were easily bested on the hill up to Charterhouse by an electric bike (oh the shame of it!) From Norney northwest led to Shackleford and over the hill to the scene of our last employment (or if you prefer, the home of Queen's drummer). Hops aren't a common sight on Surrey's roads but they were on the road to Seale. In Sandy Cross a left turn led us to lunch at the Barley Mow in The Sands. We arrived early at 1220. It had been 11+ miles with a few undulations but only that one lung-burster.


Most settled for child's portions though Ed and Lilian were grown ups. The pub wasn't busy when we arrived (no surprise) but worringly neither was it as we leave just before one thirty. The way to Cutmill is downhill so speeds of 30+ mph soon brought the lake into view. Shortly afterwards we turned right and headed past Peper Harrow's entrance. On the cross-country to Eashing, Ed had a close encounter with the sand but seemed unharmed. And that left just one more surprise though probably of interest only to habitual television channel hoppers: Channel 4's Supervet clinic high above Godalming. From the Jack Phillips memorial, we took an all too familiar route: Farncombe, Loseley, Guildford High Street. the A3 cyclepath, and Ripley to tea at Ockham Bites. Just over 30 miles from 11s to teas (plus a further 20 miles for me).


Finally if I read the notice correctly, the "infamous" footpaths between Byfleet and Wisley are to be upgraded to bridleways. Don't get too excited just yet - appeals don't close for another three weeks. 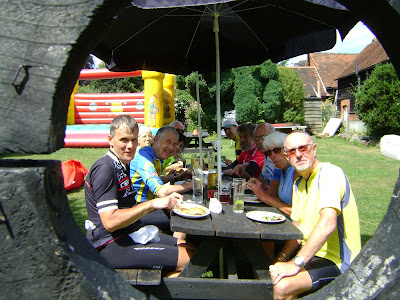 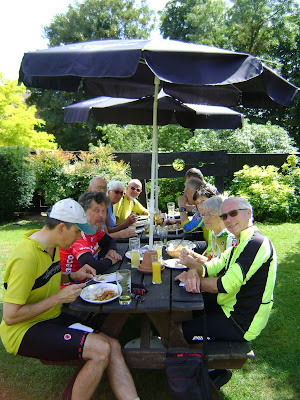 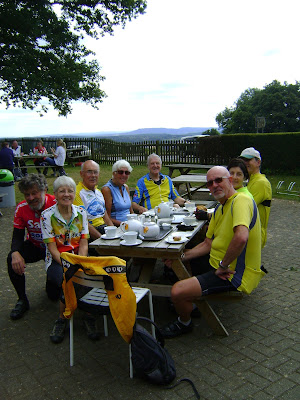 Your leader returns for a jaunt into deepest Surrey.
We meet at a comfortable Sainsbury's cafe in Cobham where a phone call was made to the new lunch destination (nine to dine. not including me)
One day I'll actually do the published ride!
A lapse of concentration in Cobham High Street sent us toward Leatherhead but I swiftly retraced before anybody had noticed.
We head toward East Horsley, Britain's richest village in 2011 & 2015.
Up and over the North Downs and left to Albury (where the difference between the 2001 & 2011 census was one person!) 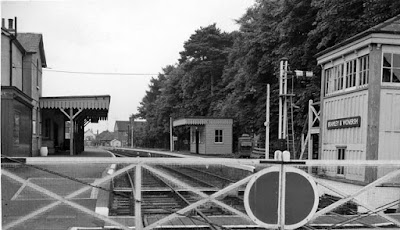 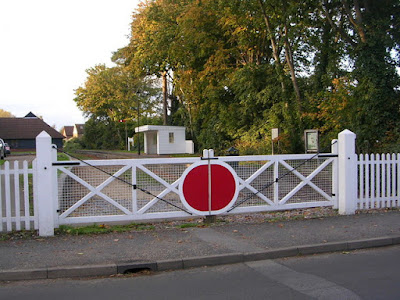 The above pictures show Bramley station in 1961 & after renovation.
Trains ceased due to Beeching cuts in 1965.

Lunch was at the Wheatsheaf in the High Street.
Tea was at the renamed Squirrel Hill cafe, Newlands Corner.

I returned home via the NDW to Staple Lane car park where I noticed a little van serving tea and cake. 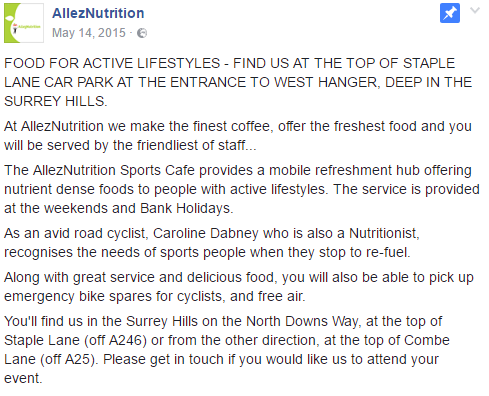 The weather was dry and warm with a sunny ride home for all.
Posted by Tartan Socks(long) at 21:20 1 comment:

Due to the unsuitabilty of the Witley pubs, I propose one of the following ......to be decided by a vote on the day. 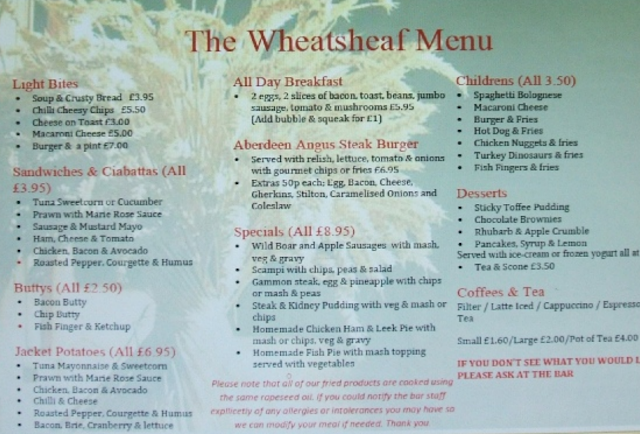 The publican has requested he know in advance any food orders as he only has one person in the kitchen.
Posted by Tartan Socks(long) at 19:18 No comments:

Having left Bob, Richard and Mike at the golf club we headed south through Rusper where tea and cakes were already available outside the church. Resisting the strong temptation we continued on the 'usual route' to Warnham level crossing. Arriving at the t-junction by The Sussex Oak we turned right, using less frequented (by us) lanes to rejoin our 'usual route' to Broadbridge Heath. David W left us here. A short, noisy spell on the A264 brought us to the welcome turning to Slinfold, where we enjoyed lunch at The Red Lyon. Daniel was waiting here to join us.

After lunch Jeff and Daniel chose the road route to tea, the rest of us headed west on the Downs Link,stopping for the obligatory photo at the two tier bridge. We left the Link at Lynwick Street, Rudgwick. Graham found an alternative route but sadly he didn't have to carry his bike up about twenty steps. In the wonderful but not too hot sunshine we followed the 'usual route' via Ellen's Green, Okewood Hill (where The Punchbowl  has just reopened) to Weare Street. Here, Ed punctured but soon effected a temporary repair, good enough to get him to Capel. Jeff and Daniel were here and had thoughtfully left us some cake. Whilst eating/drinking/talking Paul D and many walkers arrived. After a lengthy break during which Ed changed his tube we left to head homewards. A very modest mileage for me, thanks everybody for your company.
Terry 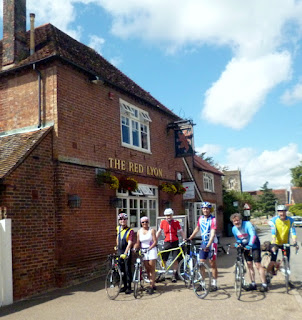 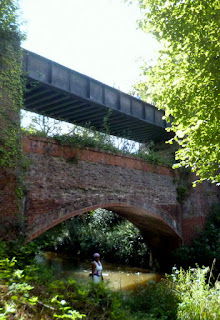 Rudgwick two tier bridge
Posted by Terry at 21:39 No comments:


Thank you Dave for a very pleasant ride on a near perfect day for cycling. 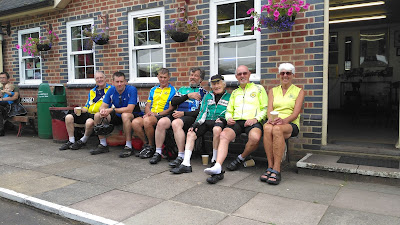 As others found elsewhere Plan A ("lift up thy bike and run") would have worked but we (Ed, Steph and G) used Plan B passing under the Pru ride on the Hampton Wick side of Kingston bridge then left by Sigma. Bushy Park saw numbers double with the appearance of Ken, Paul and Tony. No surprise there was very little traffic until we neared Chertsey. As the rendezvous was reached, Dave and Don were coming over Chertsey Bridge! So without delay we transversed the town and rode up the hill towards Longcross. Down to Windlesham and up to Sunninghill got us to 11s where Pam and Vic were enjoying the sun.

Once refreshed Steph and Don headed home. Save for a brief detour into Windlesham and Bagshot the rest had to endure traffic on the A30 and B3272. No water babies were sighted in Eversley. Just after Bramshill Police College a minor road brought us to The Shoulder Of Mutton at Hazeley with cows at bottom of garden as a backdrop for an alfresco lunch.

The afternoon was more countrified at least as far as Fleet!(Mattingley, Phoenix Green and Winchfield Hurst) after which basically we followed railway through Farnborough, Pirbright and Brookwood. Here we turned northeast for tea at a popular Mizen railway. About 75 miles door to door.
Posted by RaasayWarden at 16:50 No comments: