Two months off the bike seems to have begat an embryonic inclination to conspiracy theorism. Is C&M trying to tell me something? After a warm welcome within sight of the red hot pokers of the Garden Centre and the still redolent embers of Clandon House, I enjoyed the somewhat damp company of the C&M as far as Guildford High Street. Here  not quite time enough to remove sunglasses and don waterproofs before the peloton was off for North Street. Baulked by red lights and traffic, I did briefly glimpse a luminescent Vic at the bottom of N.St. but that was my last contact with C&M for the day. An anti-clockwise circuit  in the face of horrendous Forces Day traffic got me to JDW.  After an obstacle course of one way traffic and endless barriers, I eventually found my way to the friendly A31 Farnham Rd, where I could cycle once again, even if the only way was up and parallel to the Mount. Down then past the Watts Gallery and up again to Puttenham Heath Road and the Good Intent in Puttenham. I thought I might be the last to arrive, but there were no bicycles.

After a damp wait I fished out the mobile to 'phone Ed and found a voicemail from him to say that the party was going to Hurtmore. This puzzled me as I was sure that Puttenham was the destination. Nonetheless I left a message for Ed (I had no idea that some form of code is necessary),  upped sticks and headed down to Hurtmore. It seems ill-endowed with taverns. I searched high and low but found no sign of cycling life. After another vain 'phone call, I responded to the call of home via Farncombe and Loseley Park.

On the +ve side, I did enjoy some unexpected hills and was not tempted by bacon rolls, beer  or carrot cake, so the calorie and cholesterol count was nil, though without the company of the phantom riders of the C&M. My roll of Kodak film remained unexposed.

I mentioned Conan Doyle in last week's post and this week we had our very own "Adventure Of The Solitary Cyclist" (more of this later). With three octogenarians, this must ranked first among rides based on highest average age!

On the way to 11s there were plenty of signs and cyclists so at least two sportives. Clandon Park may have lost its no roof, windows, ceilings and floors but the hoardings are up and security guards are in situ so action is imminent . Just nine were gathered at the garden centre with Jeff and Andy making welcome returns. However Andy's stay was short lived - he was unwell. We needed an substitute leader - me.

The A25 saw the six into Guildford. Nothing in BBC's weather forecast had suggested that our passing shower would last from Merrow to Puttenham. So we donned waterproofs on the High Street  and then the fun started! AFAIK there is no east-west cycle route through Guildford centre so my plan was to use pedestrianised Friar Street to reach the town bridge. But that was scuppered when the trailing Vic turned right off North Street towards the bus station. So we advanced to the inner ring road and happily he spotted us. But of Jeff there was no trace. On the bridge Ed made the first of several calls through the day - it went through voicemail. Later on Ed did receive a voicemail but without the passcode, we were none the wiser!

We rode the Loseley road to Farncombe. Charterhouse school was out for summer and in Norney a first right led us through Shackleford and on to Puttenham. The Good Intent had plenty of room for the unbooked - another worrying sign of the times?

By two it was warm and sticky and time for some of Andy's promised roughstuff. The NDW got us to Watts Gallery and the uphill brought us to the start of the trackway. The Mount has been resurfaced so the town bridge soon hoved into view. And it's now possible to ride the cobbles without riding on the pavement - thank you Guildford council.

At lunch we agreed on a teastop change and were delighted to discover that the A3 cyclepath has been gardened. Not so its continuation from Ripley to Ockham Bites. At Vic's insistence we stopped for a second time to admire orchids (bee, in this instance). And did you know the entire building is privately owned by Ockham Bites? After a desultory teastop we went our various ways. Just 56 miles door to door. 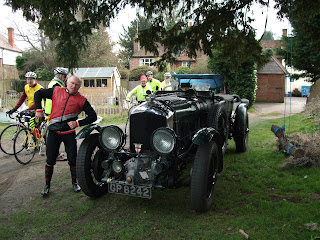 Posted by RaasayWarden at 09:38 No comments:

It's a couple of years since we headed this way and much has changed. By ten or thereabouts, seven had gathered in Wetherspoons. Leaving Bob behind in Astolat, we headed south to Shalford before quieter roads took over : Bramley, Hascombe, Dunfold and Durfold.

Black Down rears up after Shillinglee but fortunately our route lay along its side. The first change was the re-opened Lickfold Inn (which must hearten the new Top Gear presenter). But it marks the start of the "climb" (Bexleyhill). This year the score was 5-1 with only Dave S wobbling to the top without putting a foot down. The Duke Of Cumberland was bathed in sunshine as we disappear in its vast gardens. 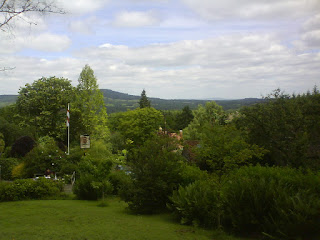 Mindful of our newest octogenarian, we skipped the King Edward VII estate and its 247(!) new houses and apartments by heading north. Since my last visit Fernhurst has gained a one-way system. Seeing no obvious alternative I ignored the signs without consequence; apologies to anyone appalled  by my rule flouting. The standard route was rejoined for the climb to Linchmere. Paul punctured in Hammer Bottom leading to an unscheduled delay of thirty minutes. With the A3 now underground, Hindhead has been transformed with even the old Conan Doyle house (Undershaw) being redeveloped.

Lillian and Ed headed for Haslemere and an early train so just four started the last leg. I can't recall the last time we used Boundless Road so Brook Wormley and Enton Hall were new to most. Another sign of the time: Milford Hospital has sprouted a large housing estate. Terry peeled off in Godalming for Shalford whilst we took the Loseley to Guildford where my day ended. Dave and Paul were last seen tackling the cobbled High Street.

Only 45 miles but b****y hard. Pleasantly warm with plenty of cyclists well off route if they were doing the L2B.
Posted by RaasayWarden at 07:02 1 comment:

Read more about it on the SWLDABlog. Picture below starts the story. 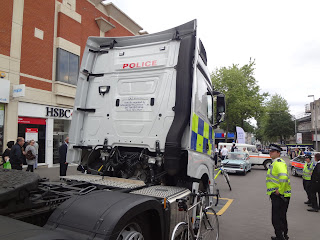 A rather mangy Parrot
though very smart inside 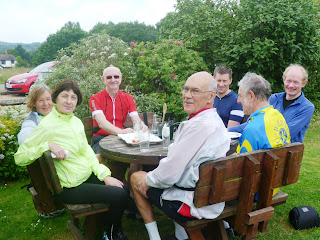 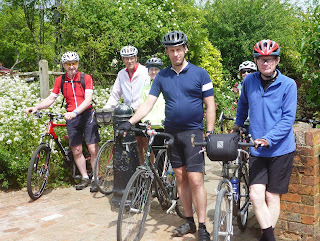 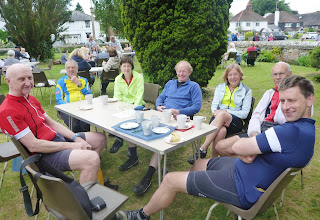 At Brockham - sitting around, eating and drinking once again!

On a cool, damp morning eight of us (including Jeff, welcome back to C and M after sickness, Jeff) set out from Squires, West Horsley, bound for The Parrot, Forest Green. We soon warmed up after ascending Shere Road, with a stop at the top to order 'Six roast beef sandwiches, please' at The Parrot. By turning into Chantry Lane, we avoided the centre of Shere, also chose to avoid the stream by using the footbridge and were able to admire the flourishing allotments. After the climb south we turned into Brook Lane thence via Farley Green (Shophouse Lane) to Smithwood Common Road and Amletts Lane to bypass Cranleigh. As we passed, the refurbished Park Hatch looked very smart but we pressed on to Ewhurst Green along Plough Lane to rejoion the B2127 to Forest Green. Here our pre-ordered sandwiches soon appeared and we were able to sit outside and enjoy them.

After lunch the weather brightened and warmed up a litttle, we followed the 'usual' route to Capel where we ignored the welcoming signs of 'Teas at the Church' - we were heading for Brockham. At Newdigate we turned right and shortly left into Church Lane, soon joining Parkgate Road, then via Parkgate and Shellwood Cross to Brockham. Upon arrival we were pleasantly surprised to see Ruth and Rob already there with their choir friends, but, most importantly, there was still some cake left. After a leisurely tea break we crossed the golf course and after Pixham Lane I left my good companions at Denbie's roundabout. About forty six miles for me, d to d, but I expect others will have done more.

Quite by chance all nine meet up in Stoke Poges before continuing to 11s. Thanks to a drizzle never heavy but penetrating, the cafe had few other customers. Alan headed back so the bunch was now:
Irene, Caroline, Janice, Lillian, Maureen, Pam plus Dave S and Graham.

We set off on an amended course: a quick tour of the Beeches, then south through Burnham, past Dorney Court and over the Thames to Bray. Our target was Moneyrow Green but the White Hart had a private party and the Jolly Gardener, a 45 minutes wait for food. So after drinks but feeling hungry we continued to Windsor, Datchet and Wraysbury and into Staines where three enjoyed tea and cakes at North's. Grey until five when blue/sun appeared - naturally we were home by then.

Thanks all for turning out on a miserable last day of May.

Posted by RaasayWarden at 08:31 No comments: