Fortunately for me, I only had one and a half miles to get to elevenses!   I say that because the weather forecast did not induce one to go on a bike ride today so I was pleased to see four people already in Wetherspoons when I arrived.  Surprisingly another five 'clubbers' arrived before eleven!  Bob and Ian planned to make their own way to Dorney, Carolyn returned to Teddington, Graham took the opportunity to check out one of his future rides whilst Don, Dave, Alan, Roger, Mike and myself headed off to Windsor Great Park via Egham. The rain started as we rode up Egham Hill!   Don turned back and Dave, minus one of his over shoes also decided to return. I shortened my ride in the park because of the rain... then was held up at the peanut roundabout (where we turned right), due to a very long procession of motor bikes and scooters.  The riders and bikes were dressed up with Xmas lights and decorations etc...!! Xmas is on the way!!!

Along Drift Road, through Fifield, past Bray Marina, right along the track taking us on to the bridge which led us to the path around Dorney Lake and so to The Pineapple for lunch where we were joined by Bob but no Ian?!  This pub is well known for its sandwiches but today they also had roast dinners on the menu.  I ordered a child's roast and it was surprisingly generous and very tasty!

Our return journey was 'the norm'!  Back to Staines asap after lunch for the wind had become very strong and blustery which gave us a tremendous boost cycling through Eton Wick - glad I wasn't going in the opposite direction!!    A tea stop was not required so we all went our separate ways from Staines.

Thanks to all for their company :) A good day even though rather short, Pam ) )
Posted by RaasayWarden at 06:01 No comments:

Not outside a pub this time. Thank you Dave for a very pleasant ride. 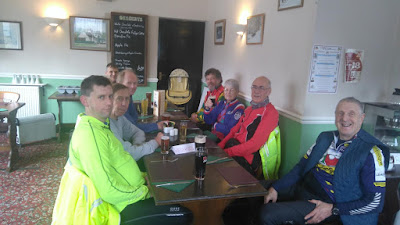 Our scout tells me that a visit to the Jolly Farmer would empty the deepest of pockets so lunch will now be at the Sun in Windlesham (GU20 6EN / SU933642)
Posted by RaasayWarden at 08:17 1 comment: 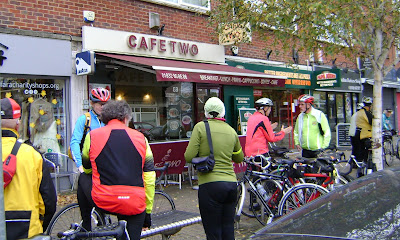 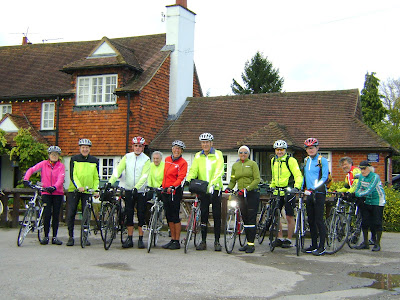 Many thanks to Irene for many enjoyable rides over the years..........she's calling it a day on leadership duties.


Some folk may remember a recent post on the sudden closure of The Jolly Farmer at Buckland.

The new owners seem keen to open up ASAP:

On a bright breezy day a baker's dozen set off from Cafe Two in Addlestone. We left at 11 proceeding along Church road towards the Otter Roundabout, then along Foxhills Road and Stonehill. A left into Old Chertsey Lane and right into Philpot Lane brought us to Horsell Common. We crossed over the Basingstoke Canal on a footbridge to Goldsworth. After passing Evans on our right we proceeded down White Rose Lane to the Old Woking Road, turning right to Send and Send Marsh. We arrived in good time at The Saddlers Arms where a table was reserved. This serves a full menu 7 days a week so the choice wasn't roast dinners or starve - very good food and plenty on the plate.
After lunch we continued along Marsh road into Ripley and on to Ockham Bites. A right along the lane to the Black Swan, and left soon found us in Cobham where we went our separate ways.
Thank you one and all for a very nice day, hope you all arrived home before blackout set in.
Posted by RaasayWarden at 22:04 No comments:


From memory for completists!

With a prompt start and just eight in the batch, a northern route was chosen past the Young Person's Estate and Bedfont to arrive at Stanwell Moor's garden centre well before ten. Here we were joined by Irene and Alan compensating for the departing Paul. And early arrival meant an early departure which proved fatal for the late arriving Neil.

Poyle and Colnbrook were all too familiar but after a transit of the rapidly disappearing Hollow Hill Lane there was a surprise (at least for this author). We turned west to enjoy Orchards Residential Park, and Slough’s northern suburbs (Wexham, Manor Park and Britwell). The escape to the country took us along Walton Lane and past the Burnham Recycling Centre. We then circled Burnham Beeches going first west then north then east. The Royal Oak (a pub only in name) was approached from the west down a footpath from Egypt Lane.

Over lunch we decided to forego tea and head for home in the light. The revised route went past the One Pin pub (no longer extant but featured in Genevieve)  and on to Pinewood Studios where three very large sheds are appearing on green belt land. Tony left just after the incinerator, and Vic and Irene in the middle of Colnbrook where Janice shown off her pumping skills following a puncture. Only Ed stopped for a second time in Vermeulen’s so here the story ends.
About 60 miles door to door.
Posted by RaasayWarden at 21:41 No comments:

According to the website, Tesco Addlestone and its cafe are not open until 1100 hrs. So Irene will be in the Golden Cafe from around 1000 hours. This is some 50 yards further west on the left hand side of the main road. Opposie is the local bike shop.
Posted by RaasayWarden at 20:46 No comments:

Many will have received an email from Steve and Ann  so for those who didn't ....

Next year's Easter tour will be based at the York House Hotel Eastbourne BN22 7AP. The cost for 3 nights will be £126 (plus £45 if you want a sea view!). This includes dinners on Friday and Sunday. To express an interest please contact Steve and Ann before November 24.

The email address is: steveandann61@btinternet.com.

You may also interested in the Annual Dinner. This will be on February 7th - same venue, same price last year. A ride will start at 9am from North Cheam to Thames Ditton via  Steve and Ann's place in Epsom. Further details in the next week or so.

Posted by RaasayWarden at 20:34 No comments:

I arrived at Hampton court early and soon had a group ready to head off just after 9.00 off 11's at Vermeulen's, not a long ride and we did arrive not long after 10. With the short daylight available I was keen to get off to lunch and we left 11's at around 10.40am. 9 set off through Colnbrook and past Iver golf club crossing Langley park road and into Trenches lane. With a shortcut through Orchard residential site and to Middle green and across the A412 to Stoke green. Through Farnham Royal and East Burnham and a loop round to Egypt. We arrived at the Royal Oak early with 7 sitting down for lunch. The Royal Oak is a very popular lunch time venue so I had pre-booked a table.

The food was good and served quickly and we set off for tea well ahead of schedule. Heading just South of Hedgerley  and on through Stoke Poges. At this point the general consensus was to skip tea and head for home. A route change and to Iver and Thorney. where I took my leave of the group and headed towards Sipson and home.

I later discovered that as Janice headed through Colnbrook she punctured. Also that Neal had arrived at 11's 5 minutes after we had left but did make his way to Farnham common but couldn't remember which pub we were going to. sorry Neal.  I arrived home well before dark and did manage to take Ed on roads he had not cycled before! 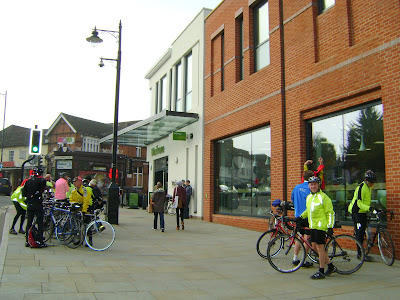 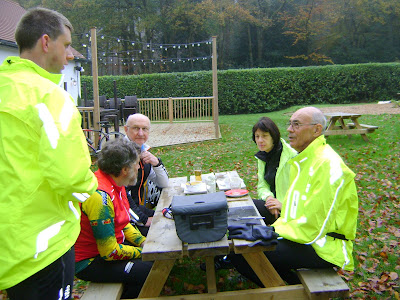 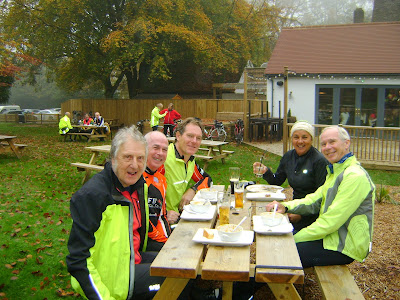 Posted by Tartan Socks(long) at 10:31 No comments:

Thirteen of us left Waitrose, Dorking, heading into the mist en route to Colgate. After crossing the A24 at the foot of Flint Hill the peace and calm of Inholms Lane was very welcome. I then rang The Dragon at Colgate to confirm my earlier reservation but they were fully booked and couldn't accommodate us, but we decided to go there anyway and sit outside if necessary, or there was always the alternative Holmbush at Faygate. After turning into Red Lane we decided against practising for next year's freewheeling competition and carried on past Roothill to Parkgate. I considered the recent rain would make Cudworth Lane too muddy so continued along Cidermill Road. (The moated Cudworth Manor was recently sold complete with full manorial rights). Shortly before turning into Orltons Lane and its' good descent Pete Marmite punctured but it was soon repaired. The Lamb at Lambs Green appeared to be hosting an elderly tractor rally.Soon we arrived at The Dragon and decided it was just warm enough to eat alfresco.

The return route involved retracing our tyremarks beyond Faygate to turn into Wimlands Lane thence via Rusper to threes at Capel church. Arriving at about 1457 we were disappointed to find there was a service at 1500 followed by teas, so we carried on via the cycle track alongside the A24, turning into Mill Road, leading to Four Wents Pond and Dorking. Due to the ever increasing mist, at the Punchbowl Lane/A25 junction everyone decided to head for home - hope you all made it safely.