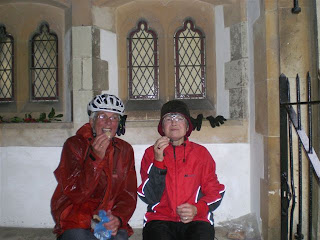 Pam & Irene enjoying Lunch
Posted by Pete at 07:09 No comments: 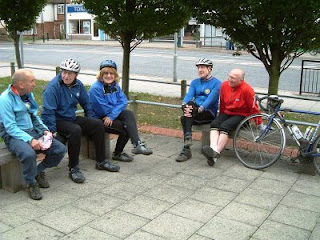 A rare photo of the Cheam and Morden Massive defending their North Cheam Manor, ready for a raid on West London along the Grand Union Canal 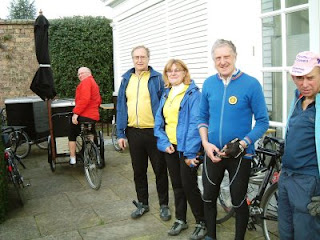 This might not look like the Hampton Court Palace of King Henry VIII. Perhaps just the tradesman's entrance. The regal redcoat that you can see is our noble leader, testing out a mightily well sprung Brooks saddle, in preparation for a possible fall-back career as a tricycle-powered delivery boy. 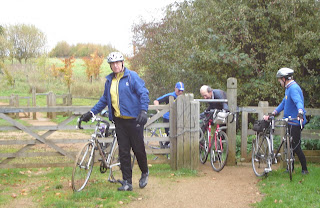 It's with hesitation that I put the words "Canal" or "Thames Path" on the runs list because historically they are less than well supported. Last summer, Ed accompanied me to Denham Country Park on mostly well surfaced canal side paths.
So to meet 6 members at NC was a revelation to say the least (Ian, Ed, Frank, Francoise, John & Jeff).
In Richmond Park, Jeff was amazed at the plethora of (mainly) racing cyclists doing the circuits. Across the bridge and TP to Syon Park to join the Grand Union Canal at Brentford.
Tarmac for three or so miles the path levels then climbs at locks but 10mph is easily achieved. Elevenses was a big Tesco at Bulls Bridge just off the route.
Bob with good reason complained of it's 11am opening, we had a nine minute wait.
Back on the GUC to West Drayton, where by now the path had lost it's surface and was a little bumpy.
South to Harmondsworth Moor and some cumbersome barriers (see pic). Past Terminal 5 to Horton Road and the George pub at Wraysbury.
No beer, according to Ian and my observations deduced a lack of upkeep, things awaiting repair, etc but despite this the non-British landlord seemed pleased to see us. Terry & Graham made an appearance so then a discussion about the 2009 Easter Tour ensued.
The return trip was via Staines, Laleham, Shepperton, Sunbury and Hampton Court's Tiltyard cafe.
Pot of tea - £1.45........... still cheaper than F***** F***.
If one of the greatest palaces ever built can do POT under £1.50, what's the problem? ............Over to you F****!!!

Friday Night Ride To The Coast(November 2008)

http://www.anothercyclingforum.com/index.php?topic=50999.0
Posted by Anonymous at 18:24 No comments: 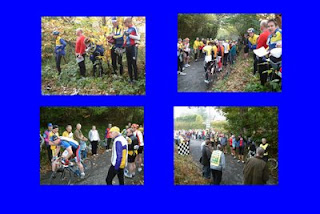 The Cat and Bec Hill Climbs
A bracing sprint down the A217 and the mad mile to get the blood pulsing got me to the N. Cheam starting grid with 5 minutes to spare, having already spotted Andy at the Banstead X roads heading Kentwards to sneak an early head start. Joined there, spot on 9am by Ed, reliable as clockwork, followed by Graham, Ann and Steve and evergreen Tony, I basked in the October sunlight and the joy of not being left on the starting line, as I had the privilege of being the leader!

The route taken was not adventurous, being much on main roads. From Cheam to Sutton to Carshalton, past the old Payne’s Poppets factory to Waddon, 5 Ways (by the old Propeller pub), to the Swan & Sugarloaf. I seem to identify places by landmarks that no longer exist! Thus we passed S. Croydon railway station and up the long but not too testing drag of Croham Road and Farley Road, which at the top, for some reason that I’m sure somebody will explain, metamorphoses into Old Farleigh Road. The ‘Old’ I can understand but why does Farley become Farleigh?

So up and down to Warlingham and the B269, still climbing steadily to Botley Hill, which Graham assures us is the highest point in Greater London. We followed the misty B269 to swoop like Toad of Toad Hall down Westerham Hill to meet the Sunday morning motoring blitzkrieg on the A25. A brief dogfight with the Messerschmitts and Mercedes before turning right up New Road to face the long climb to Ide Hill. In no time we were engulfed in the mêlé of cyclists at the top of Yorks Hill, with the Catford Hill Climb in full swing. Already critically appraising the performances, the feats of masochism beyond the bounds of sanity, were Andy, Lisa, Pete and Grant. The magazines and web-pages will relate the triumphs and disasters of the event.
Ready to leave the Fox & Hounds 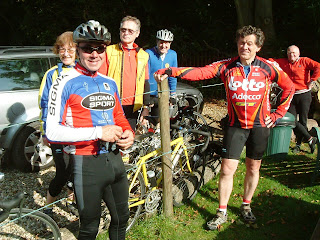 Then off we set again for the second act of the drama, the Bec Hill Climb, to be played out on the teasing gradients of White Lane, Titsey. We sunned ourselves at a lengthy stop en route at the overpriced Fox & Hounds, where the landlord charged a credit-crunching £3.40 for a pint of soda water and juice. He even complained about his bank manager! His card is marked! The fever caused was cooled by a swift descent of Toy’s Hill. Then we crossed the A25 to make our way via the Pilgrims Way to the afternoon venue for a further orgy of gladiatorial endeavour – and tea and cake. Here were also Ray with Beryl as well as Jake – all pedalling four wheels, not the customary two.
Winner of the Bec - Dan Lloyd (1.46.44) 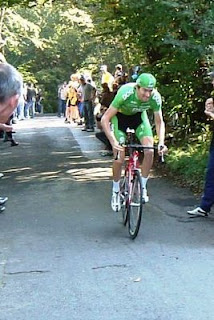 At the end, our senses sated, we struck for home back along the B269, this time a sweetly purring downhill. Past Warlingham the party split, our one anxiety – which way did Andy go?

In summary, a day to make the ladies glow, the gentlemen perspire, the leader sweat!

Gateway to Torment at the top of Titsey 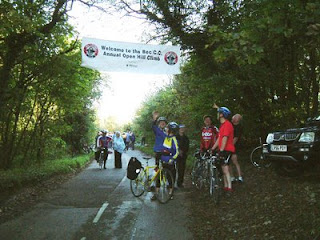 Re this Sunday's Ride to Yorks Hill etc - 12 Oct - Advisory

As the Catford Hill Climb is due to start at 10.30 this Sunday, anybody not wishing to miss a moment's sadistic spectating pleasure is advised to make his/her own way to Yorks Hill to get a good vantage point. A 9.00 start from North Cheam is unlikely to get us to the climb by 10.30, at least not me, and I would not want anyone to be disappointed!

Let's hope that the weather is good.

More From The FreeWheel 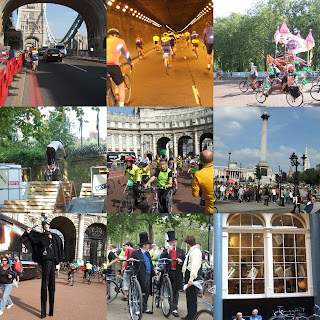 Pictures from Francoise
Posted by Pete at 17:57 No comments: 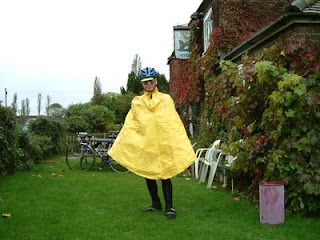 As Graham says, a most enjoyable cud was chewed in the Courtyard Cafe as we quietly steamed away.Serious intelligence was passed that the Frog and Nightgown does not provide food. I therefore armed myself with a double flavour muffin to munch for lunch in some inconspicuous corner beneath the hem of the nightgown. Then, an unfortunately timed precautionary visit to inspect the Courtyard's facilities - not long - but long enough for that vote to be taken whilst I was in absentia (or more precisely in lavatorio). It was time for the off ,to gown up and depart. Some of the party were clearly heading home. However, by the time I was caped up, not a spoke to be seen. Could I catch them up? But however hard I pedalled, not a sign of spray from a back wheel on the horizon. So it was from North Holmwood to Henfold to Newdigate to Rusper to Wimland. By heavens, they must have been going at a lick! At last the F&N but no sign of any familiar bikes from the C&M. Where are they? Have they added in a few extra miles? Puzzled once again, I reflect on the loneliness of the short distance cyclist as I wend my way homeward for an early shower and comforting cup of Earl Grey to sup with my somewhat soggy muffin.
Posted by Jeff at 15:47 No comments:

This was a miserable day, wet and windy. The forecast had changed overnight - under (not over) an inch of rain was likely to fall. But it was warm and off I went. First came Jake then me then the official party (Mike and Keith via the Zigzags) and finally Jeff. Thus five were present at the Courtyard Cafe Dorking to chew the cycling cud before a crucial vote. The motion was passed nem con and home we all went. As is often the case, it improved - steady drizzle until I was over the threshold.

Posted by Anonymous at 13:27 No comments:

From Godstone GC (not illustrated) to the Royal Oak Crawley Down to Fanny's Farm Shop via Chaldon Church - the C&M in training to join the Bullingdon Club. There was a little bit of unavoidable cycling in between refreshment stops
Posted by Jeff at 12:12 No comments: