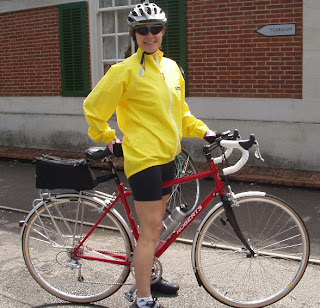 Janice on her 'Ferrari Red' machine
Picture by Lisa
Posted by Pete at 06:49 No comments:

This ride should have been Pam's but understandably Irene and I would have to do. We rode through Lower Sunbury and Upper Halliford to Laleham and Staines. As on a previous occasion Irene was AWOL! But she soon realised that we were not coming along the towpath and returned in time to lead us over the bridge. The first level crossing was under repair but they kindly let us through. So Egham town centre was next before we cut across to Runnymede. Sixteen was our number being Irene, Graham, Bob, Daphne, Ed, Francoise (long time no see), Frank, Grant, Jake, Janice, Keith, Lisa, Pete C, Pete M, Stephanie, and finally John(Pam's friend, down from Scotland). Much elevenses' talk developed the theme "How deep was your flooding?" - too deep for Grant and Frank, on behalf of his mum. Grant (no surprise), Pete M, Lisa and Janice (on new Ferrari Red? Roberts Roughstuff) were for home. That left twelve who climbed up into Great Windsor Park and through Maiden's Green to Moss End where west and then south took us to the Stag and Hounds in Binfield. Unexpectedly this was closed for renovation. A brief pow-wow, and we headed east. By luck we headed off Bob on Cabbage Hill. The revised stop was the Cricketers in Winkfield Row where the staff turned a blind eye to our BYO brigade. Tea was too close so it was taken instead at Shepperton Lock, reached via Ascot Racecourse, Cheapside, the Park (again), Egham (again), Thorpe and Penton Hook. Around 60 miles on a day very fair by this year's standard.
Posted by Anonymous at 21:24 No comments:

A select bunch gathered at Beare Green being the Cheam Four (Ed, Daphne, Keith, Pete C) with Andy, Bob, Graham, Ian and Terry who arrived one by one. It was Ian's first outing since completing an Island Hopping LEJOG in 19 days. On the way most had (almost literally) run into riders in the Capital to Coast charity event.


Bob and Terry were for home. Thus only seven carried on through Capel, Ockley, Ewhurst and Cranleigh before we stopped rather unexpectedly at the Three Compasses, Laker's Green. No objections were raised; wisely as later we learnt that its 'roast only on Sundays' rule has been scrapped. We dined, or more accurately supped alfresco, as there is now ample outdoor sitting (is the large gazebo smokers only?).

Around two we set off under darkening skies and the first hint of rain. Near the Japanese school, the taps were fully on with flashes of lightning and claps of thunder. Although it lasted no more than thirty minutes, we were soaked; the roads, awash, and trees, a scant shelter - personally the worst storm in at least five years. Near Ellen's Green, Keith and then Daphne and Peter opted for home. The rest continued through Walliswood and up past Leith Hill Place. Debris was everywhere, evidence of the storm, and we were halted at a large and uninviting puddle. The footpath from the Windy Gap car park offered the quickest way up but it's very steep which did Ed's back no good at all. Unsurprisingly Leith Hill tower was quiet so we settled into a leisurely tea and cakes. Andy's rear tyre deflated just before Dorking so then was the time for farewells. Around 70 miles on a day that stayed sticky despite the storm.
Posted by Anonymous at 22:20 No comments:

The thoughts of our great leader are set out elsewhere

so I'll restrict myself to the C&M details. The very early start did not deter Simon (naturally), Andy, Frank H, Graham, Jake, Keith, Roger and Steve and KPRC irregulars: Andy, Jackie, Rachel, and eventually Paul (complete with Dad). Around 24 set off on a very non-C&M route and at a very non-C&M pace: A2043 to Cheam, A232 to Beddington, B275 to South Croydon, A235 and B269 to Titsey Hill, B2024 to Westerham before long stretches of A25 and A21 to northeast of Tunbridge Wells. Here we got "lost" due to the road closures before finding the Halfway House at Brenchley well ahead of the caravan but behind our leader who had been shepherding the stragglers. This was a fine spot to view the Tour as viewing numbers were limited to those prepared to walk or ride.

Simon mentioned "Titsey Hill" for the return so I formulated a more leisurely alternative. Our initial stages coincided - along the Tour route to Colt's Hill before heading towards the B2017 and the centre of Tonbridge. To my surprise and later perhaps theirs, everyone followed my roughstuff route to Leigh. They survived and continued towards Four Elms. Here again there was a surprise - again they went my way towards Edenbridge and Tandridge. I should have been more precise and said Marlpit Hill. Only five reached there - the rest were just too quick. Halts at various junctions didnt re-establish contact but eventually in Tandridge a phone call located them in Oxted. Thus an excuse had been found for drinks before heading along Jackass Lane where Andy and Jackie were spotted on the A25 just before we reached the junction. The rest was routine, Godstone, Bletchingley, Merstham, Fanny's, etc.

Around 90 miles on a sunny and warm day. After the last six weeks I think we deserved it but it's just started to rain (2100 hours)!
Posted by Anonymous at 21:31 No comments:

By the time I reached the start, the skies were displaying familiar grey tones and we (Ed, Andrew, Daphne, Graham, Keith, Pete) set off fully prepared for the rain which soon began to fall. The route was a familar one: the back of Epsom, Headley, Pebblecombe, Brockham and thence to Henfold Lakes. Already here were Petes B and F and Andy, plus a fair chunk of the KPRC who had been in action around Crawley. Any thoughts of an early return were soon dispelled as the weather settled down to blustery and cloudy. Our departure (all but Andrew) was delayed by the discovery that the resident rook had "decorated" PC's saddlebag. Down Weare Street we rode to Okewood Hill, Ellen's Green and Rusper where there was a sharp reminder of recent weather. This was sufficient to demand a vote and the Blue Ship easily carried the day. Ed's route back was via Walliswood and Forest Green where we tackled a farm road(TQ124407) leading to Mole Street. Ockley lead on to Capel and the church where Frank and Francoise were setting about the cakes. The best weather of the day (sunny and warm with a strong tailwind) was reserved for the last stage of the ride.
Posted by Anonymous at 18:39 No comments: