No pub photo this week, but here's a recent pic of our leader. Anybody recognise her ?

A 'good weather' day had been forecast, possible afternoon showers - which we did not get!  Bob and Ed were already at Fairoaks when Lilian and I arrived just after ten with others arriving soon after.   Stephanie, Miles, Alan and pal John, Carolyn and hubby John. All but Ed did not continue to lunch.   So, Ed, Lilian, Dave, Don, Terry, Ray and Vic joined me for the ride to Puttenham; joining the Basingstoke canal at Woking and leaving it at Brookwood.  Down Cemetery Pales to Pirbright onwards towards Normandy on the A324. A left turn into Corbett Hill Road, right at A323, left into Bailes Lane where we continued along the bridle path to Westwood Lane.  Then it was up Wanborough Hill where a right turn took us to Puttenham.   Unfortunateley Ed took a wrong turn at the top of hill causing a little concern and Terry made a big effort to find him (you never know) but they both arrived at the pub OK.   Graham is on Warden duty at Puttenham Barns so he and Irene joined us for lunch after their morning ride!

Our return was on a well known route - cycle route 22 alongside the golf course, Pilgrims Way, left past the Watts Gallery and then right along the Hogs Back, leading to a very steep drop into Guildford.   Up the High Street, across Stoke Park, River Wey and then the cycle path alongside A3 leading us to Ockham Bites for a welcome cuppa accompanied by plenty of chat and giggles!!  Then it was time to say goodbye.  Ray and Vic led me over the A3 on a bridge I had not used before, crossing Wisley Common; a short ride along the River Wey into Byfleet.  Made a nice change from the usual way I would go home.

Thank you all for your company, with  a special thanks to Terry for back marking.

Felt good today.6 at 11's, 5 to lunch via the bumpy track past Gibbon's Mill.
Dave had a quick drink and was off............we lingered for around 2 hours.
Graham mentioned this new tea/coffee stop near Cox Green.We called in........not for refreshment though, just a look.
Long stop at Capel too. 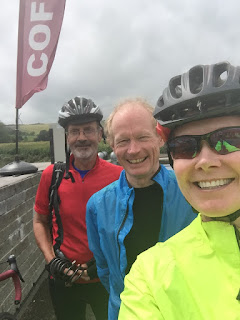 The more observant will have noted a potential clash with a larger event - the Pru. We could try "pick up thy bike and run" at Hampton Court but both Dave and I feel that it could be undignified and perhaps chancy.

So the start will be Kingston Bridge. The centre of town (including the station) should be clear as their route is the one way system in reverse, that is, twice passing under the railway. Any one coming from the north should use either of  the underpasses at the ends of Kingston bridge to reach TK Maxx. Conversely there'll be a rendezvous at Chertsey Bridge (car park opposite Kingfisher). Say 0915 to 0930.

On the way to 11's the rain started and by the time I arrived at the NT cafe at Runnymede I was fairly wet. I was first to arrive soon joined by Bob who had been sheltering under a tree by the river. Don, Dave, Ken and Alan soon joined us. Very soon Irene arrived dressed for walking as she was off on her hols the next day. Terry, Ed, Graham, Rachel and Vic also braved the rain. Setting off, Don headed home,  with a break in the rain we headed to Windsor and over the Thames to Dorney where Alan and Graham headed for home. The rain was off and on all the way to lunch. Up through Taplow to the A40 and across onto Forty Green and past Alfriston school where Dave had had enough of the rain (also having cycled to Bedford the previous day) onto Horseshoe lane past Winchmore hill then doubled back to the Pub.

The Potters arms is a typical pub that now does dinning and we were welcomed, drinks and the bar and food orders taken at the table, the food took a little while to arrive but was of good quality. As we were eating our lunch the Sun popped its head through the clouds and stayed with us for the rest of the afternoon. Stomachs full we headed off to tea at Windsor farm shop. Magpie lane to the A355 and across into Bottrells lane and Back lane to Chalfont St Giles and on through Gerrards Cross, Fulmer and across the Bath road and M4 to Datchet and onto to Tea. Vic and Ken headed home so only 5 had tea and cake in glorious sunshine at Windsor farm shop. A nice venture to a new lunch stop in the Chilterns. Thank you all for your company. 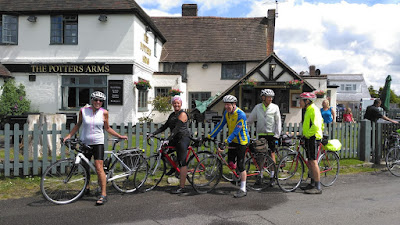 Once again the Council is seeking (and based on previous experience will ignore) your views on  proposed changes for cyclists. The next tranche covers roads which I rarely use. If you do, you may wish to comment. See

Five joined the annual ride to the coast with Graham joining the group until Horsham before he headed off to meet Ed and others in Guildford.

Starting at Dorking, first stop was in Horsham where Bill's was unable to accommodate the group so we moved to an adjacent cafe where perfectly adequate refreshments were available. Timing was perfect as the only shower of the day happened whilst we were there.

Dropping south into a testing headwind the group arrived in Shoreham by 12.30 and stocked up at The Bakery with lunch and also rock cakes and bread pudding for the journey home. Although windy the sun came out and the sea was turquoise for lunch on the beach.

The break allowed time for much speculation as to the source of the loud clanking from Janice's bike (bottom bracket, gears, fly wheel, spokes or who knows what). Fortunately the bike still worked and with a tail wind the group headed down cycle route 2 to Hove and then north to a pub stop at Warninglid. Drinks washed down the rock cakes and bread pudding and then it was head down and homeward bound for the last 30 miles or so.

An enjoyable day out!

Posted by RaasayWarden at 07:17 No comments: