The Jolly Farmer at Weybridge 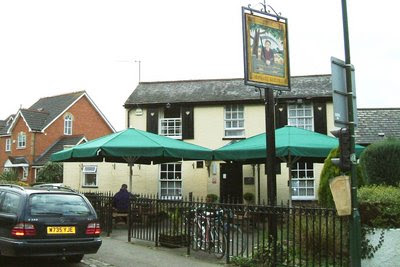 There were around 40 cyclists at West Horsley Squires including 21 from the C & M,the remainder being Hounslow Wheelers.Some may have noticed a modest reduction in prices - PoT is reasonable £1.22 whilst a cooked breakfast is £2.99.
Under cloudy skies,Ed led 15 in a NW direction along Ripley Lane over the A3 and past Newark Priory.Established in the 12th century,but in ruins since the 1730's when the owner,Lord Onslow decided to preserve what remained.It is now a grade one ancient monument on private land unable to be reached at close proximity.
Heavy traffic was encountered on the short distance to Weybridge's Jolly Farmer.
Initial doubts about it's food policy was cast aside and all seemed satisfied with a combination of beef baguettes and beef roasts.
Graham took over at the front on a familiar Wayfarers route to Hersham Weir and Weston Green.
The weary took tea at Long Ditton Squires.


For riders unaffected by the economic downturn,Lidl provides us with a chance to spend from Thursday.
Posted by Tartan Socks(long) at 19:35 No comments: 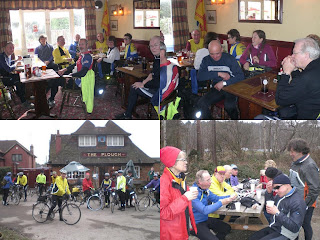 What a day - my first run as a leader and what a wonderful start with 20 people at Sainsbury's, Cobham which became 16 at lunch! We welcomed three new riders to the group, Jessica (surname unknown - sorry) and Jane and Dave Jarvis. My thanks go to Irene who graciously took on the duty of 'back marker'.We made our way through Cobham taking the lanes to Ripley. Fortunately most of the water that was rushing over the lanes, plus ice last Wednesday, had all but disappeared! From Ripley we continued along (up) Newark Lane, past the ruins of Newark Priory on our right, to skirt around Woking via Mayhurst to the six cross road roundabout - not too tricky to-day! Then along Woodham Lane to do a left and a quick right up Horsell Rise and so to The Plough where we were made very welcome.After lunch we made our way to the Basingstoke Canal via South Road, through Horsell village, into Arthurs Bridge Road where we joined the tow path with it's beautiful sand/gravel surface! The good surface finishes at Monument Bridge and it was here that we split into two groups, Irene led the tow path 'bikies' and I led the 'roadies' ! We met in West Byfleet (as planned!) then into Pyrford Road, Lock Lane, over the A3 at Wisley for tea at Ockham Bites! The ride took it's usual course, some staying for tea and others continuing on their way! Thanks to the weatherman for keeping the rain off until after tea and my thanks to everybody who made my day such a pleasure - Pam :)
Posted by Pete at 17:20 1 comment:

Due to the bad road conditions in the lanes The Hilly 50k has been cancelled for this Saturday
Posted by Pete at 06:48 No comments: 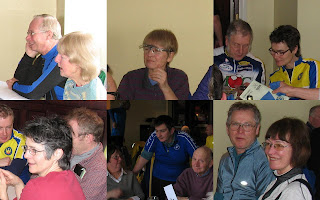 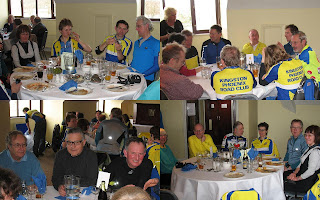 The Annual Lunch at Horton Golf Club
Pictures from Colin Quemby
Posted by Pete at 06:59 No comments: 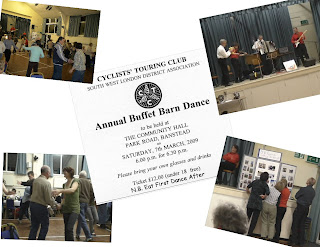 Thanks for the Sausage elevenses 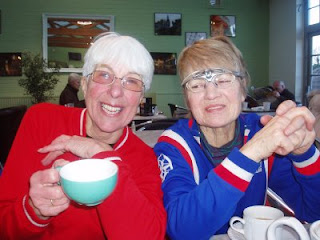 Cheam & Morden Sunday 1 Feb ride.
Thanks to Irenene for a splendid 11 o'clock stop in Staines. I must say what a lovely spot you live in and the Garage so tidy, I must have lessons. Picture taken at 3.30pm tea stop at Squires in Sunbury (or somesuch where - never been to this stop B4). A fantastic days ride and 73 miles to the chart. 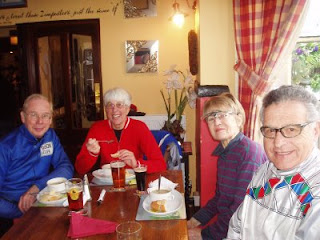 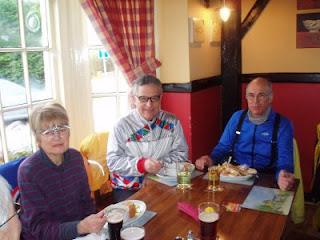 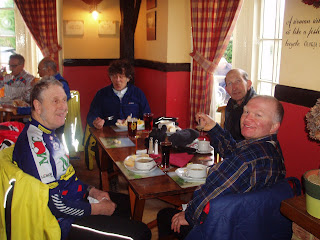 The above 3 photo's are of the group on Irene's ride to the Duke of Edinborough pub Near Virginia Water.

Base Camp was set up at Staines, where the expedition was fortified with tea and sherpalatas.

Andy and Simon - the latter defrosting by the radiator. Pity it was too late to save his fingers! 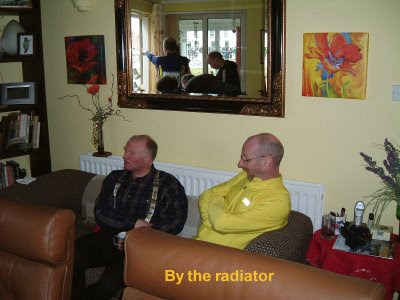 Blue skies and sunshine above the Duke of Edinburgh, Woodside, before the blizzard closed in. 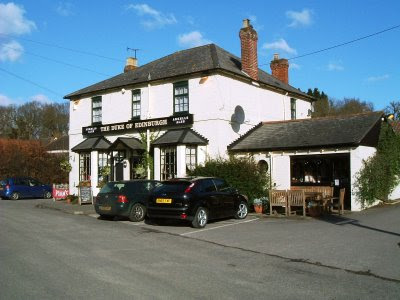 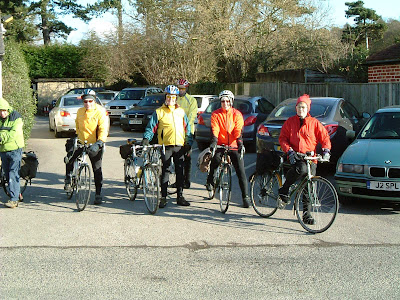 Doing my best Bibendum impression, I joined five huddled in Kingston’s doorways on a very chilly 101st for the old man (had he made it). From somewhere beyond the Urals, a strong breeze blew us past Hampton Court and waterworks then along back roads to Shepperton. In Staines the knee bandage was looking distinctly frozen as we lined up for Irene's hot sausages and baguettes. Soon seven became thirteen with Pete's DVD of the New Year's Day parade filling the giant screen.

Eventually over the water we went and round to Pooley Green where we joined Wednesday's route up Middle Hill, in at Bishopsgate and out at Cranbourne Gate. Eschewing the kidney, we turned at the next, crossed beside the Loch Fyne and reached Woodside's Duke of Edinburgh around twelve thirty. Bob and briefly Ian picnicked; the rest meekly settling for hot food.

On the return the racecourse and Watersplash Gate were familiar sights but we took the long route past George III to avoid that hill. The only variations on our morning ride were Tite Hill, a quiet towpath to Laleham and the Seasons (ex Orangery) café. In Kingston a sudden dusting of snow was a further reminder of just how cold it had been.
Posted by Anonymous at 18:20 1 comment: