Epsom Downs Racecourse.The (new) grandstand was open to all. 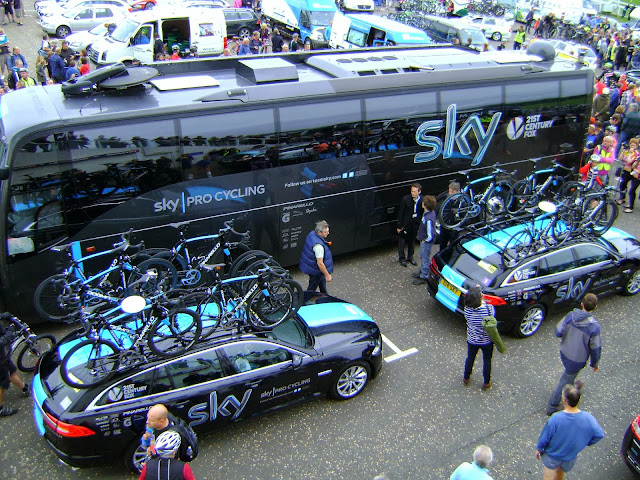 Opposite Tower of London (outside Wetherspoons ,The Liberty Bounds)

Last Lap video
Posted by Tartan Socks(long) at 15:13 No comments: 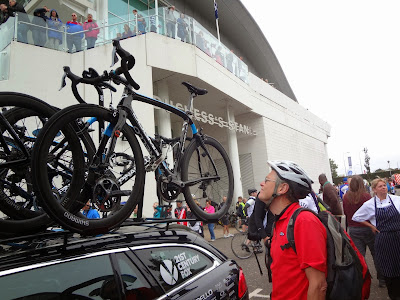 Five became nine at Newlands Corner after the shortest route from Cobham (past The Hautboy, over Hunger Hill and down West Clandon).

The dire weather forecast sent four packing. And I took no chances by dropping down to the Silent Pool before veering towards Bramley. The only significant climb was that out of Thorncombe Street to discover more road spending, the descent into Godalming (more or less complete).

Prompt service at The Jack Phillips saw us heading for home(!) just after one; thoughts of Capel teas banished for at least two weeks. After Farncombe, we split; three heading for the A25 and two for the A3.
A downpour before Ripley saw me donning a cape; naturally it stopped before we crossed the aerodrome. After a final split in Cobham, it was dry roads until I reached the royal borough (meaning the Met Office forecast was spot on).

55 miles door to door; plenty of cyclists about - disturbing most passed me with ease.
Posted by Anonymous at 09:55 No comments: 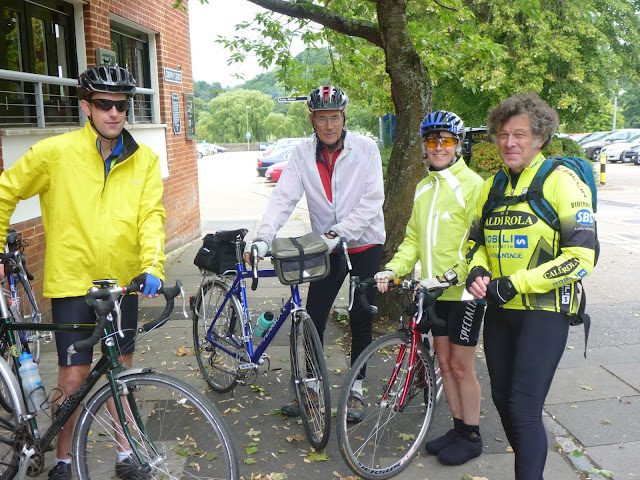 The Famous Five (4 + 1 behind the lens) at the Jack Phillips, Godalming.
Graham authoritatively informed us that Jack Phillips was the radio operator on the Titanic. Not still transmitting, but his legacy lives on through Wetherspoons. 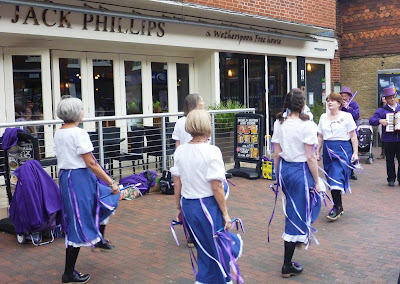 I leave it to others to identify the pressure group picketing Wetherspoons. At first I thought that it was the Salvation Army, then Morris Men, then I took the Fifth Amendment.

ITV 4 are taking a live broadcast each day.

gives British Eurosport's live feed (with audio) for those who are frustrated with ITV's frequent ad breaks.
Click on the "cycling" tab.
There are occasional "pop-ups" but just look for the small "x" in the right hand corner and these can be removed quickly.
Posted by Tartan Socks(long) at 20:39 No comments:


I overshot a turning on the way to Tandridge so a fairly ok stretch of roughstuff was included on the way to lunch.
We lost Jeff on the way but we were all reunited at The Barley Mow together with the rare sight of Bob at a location beyond 11's.
After a flatish ride in the morning,the delight of Chalkpit Lane lay in front of us on the way to tea at Farleigh.
I suffered a rear tyre puncture at the top so we sent Ian on his way along the main road.
Tea was taken in cramped conditions in the church hall courtesy of the cool and wet conditions outside.

51 miles.
Mostly cool and wet,particularily around lunchtime when we avoided a beefy shower. 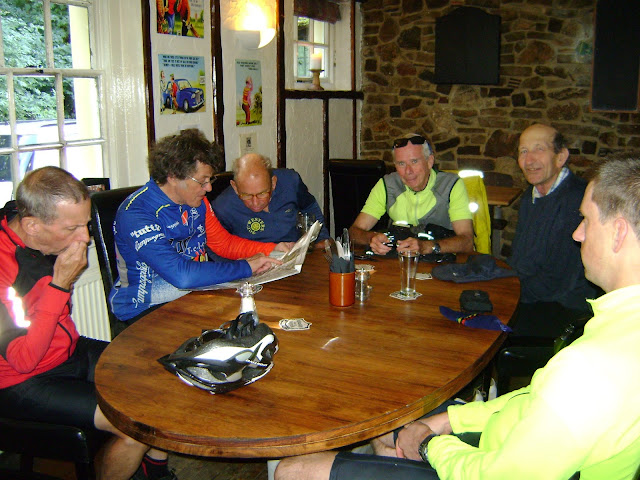 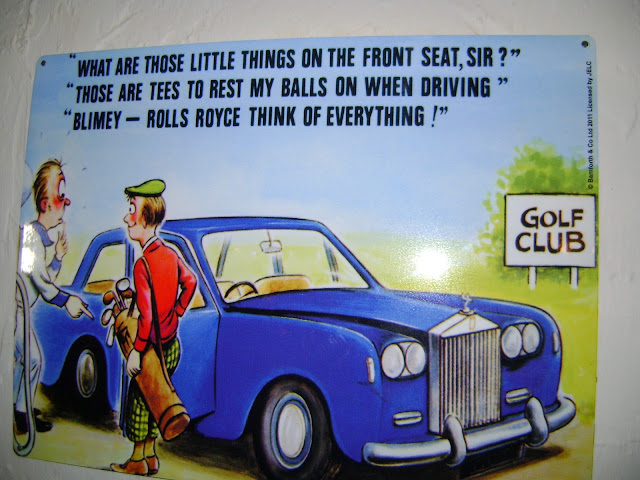 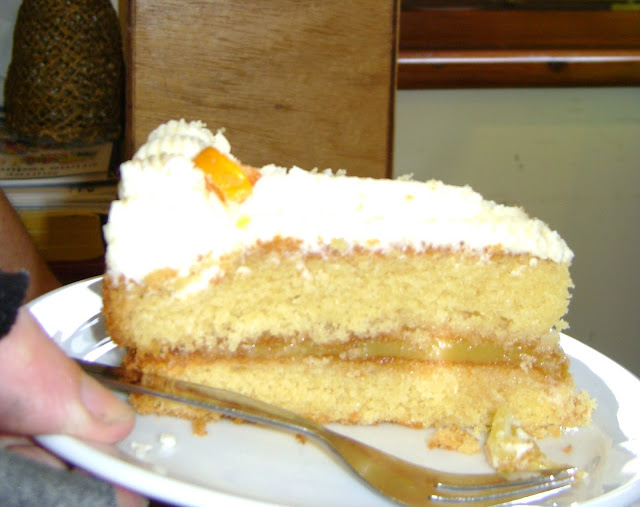 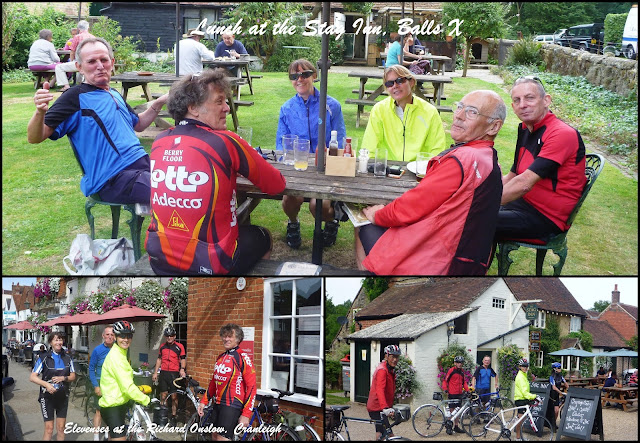 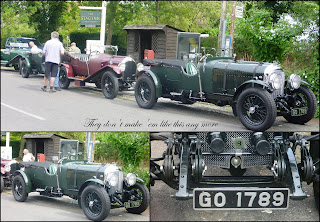 Richard doesn't; I couldn't leave a blog page empty so here's a precis.

Eight rendezvoused in Cranleigh, each with a tale to tell. For Bob, it was the Downslink from Guildford. The rest had to find ways round, under and through the wire cage which separates Ewhurst from Cranleigh (google Bookhurst Road for more). With prior knowledge I played safe and came the lumpy way via Coombe Bottom and Farley Green. For the benefit of the Runs Secretary, £2.20 buys you a paper cup of tea plus DIY toast!

Refreshed six went forth down Alford Road to the A281 and thence on to Dunsfold (where Dave flatted), Plaistow, (close to) Kirdford and finally The Stag at Balls Cross. There we joined an already seated and munching Terry in the garden. Despite a motoring / steam fair in the field opposite overspilling into the pub, we were soon served with portions which would have satisfied our trencherman had he not turned back at 11s.

During lunch it became clear that only Richard and Dave were for Farncombe. So the rest sped through Kirdford and past Brewhurst Mill and Baynards to Ellen's Green; the rest should be obvious. Terry kindly offered to be mum so five became four as we headed for Dorking West. To my surprise, just beyond Leatherhead Station I got within shouting distance of the Farncombe Two. We were turning in opposite directions so their route I know not.


To keep Virgin Media happy, the route to and from B****s Cross

Posted by Anonymous at 21:33 No comments: