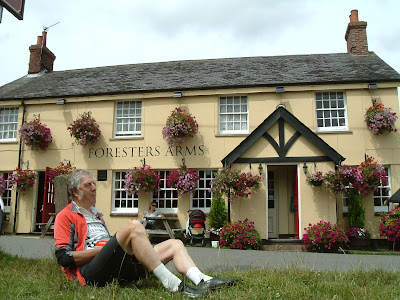 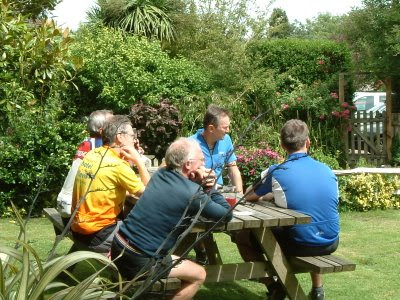 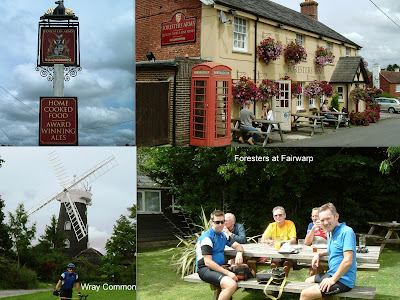 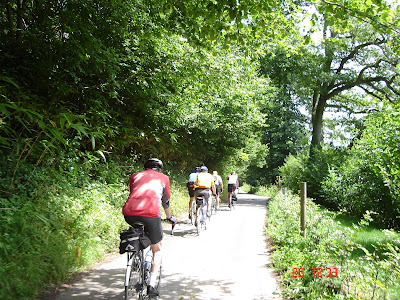 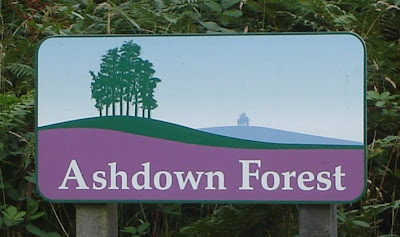 Eight of us left a rather cloudy ‘summer of 2009’ day to head for elevenses at Lingfield. Passing by Chaldon church it seemed we might be joined by another group of riders – headed by a team Katyusha jersey – but they stopped for a break at Bletchingley golf club. At elevenses, some of us tackling the huge scones at the garden centre tea room, Mike announces the competition of the day. Why is the Wetherspoon pub at Redhill, our tea stop, called the Sun? The prize is tea.

Slightly late – the scones take some eating – we set off for the High Weald. Along the delightful lane between Dormansland and Cowden we pass the South-East Road Club heading East Grinstead way. Then we are through Hartfield and making our way across Ashdown Forest past Chuck Hatch. Paul’s Garmin computer registers 211 metres and there are great views, especially towards the South Downs. Continuing southwards past Duddleswell we turn off to the little village of Fairwarp and lunch at the Foresters Arms. This is in a great location, has a pleasant garden, and was enjoyed by all.

However we cannot laze about for too long as we have to head homewards. We take a little country road across to Nutley thence to Chelwood Common. At this stage ‘summer of 2009’ sets in and we contend with light but incessant drizzle. Through Sharpthorne, Turners Hill and Smallfield we then pedal around Redhill Aerodrome and on to tea.

But nobody has won the prize! The answer is that Richard Carrington built an observatory in 1861 at Redhill and made observations of sunspots (see jdwetherspoon.co.uk). While at the Sun we celebrate Cav’s stage win and Wiggo’s fourth place and talk about travelling to Rotterdam for the start of next year’s tour.

It may not be a ‘BBQ summer’ but the great thing is it still gives us the chance for longer rides. Mike finishes with 89 miles on the clock but then again he does cycle from the ‘gateway to the south’.
Posted by Tartan Socks(long) at 16:25 No comments: 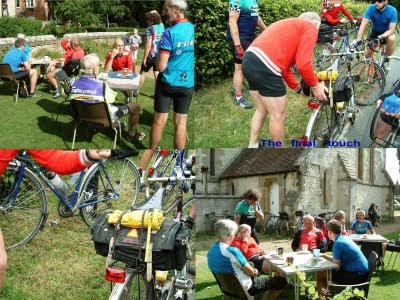 “North Cheam or not North Cheam?” That was the first question of the day. Whether ‘twas nobler to lead the ride from Cheam or sally forth direct, to join the ride at the mid-morn meet of Beare Green. Cheam won, whence Keith, Paul and Jeff accelerated southward over the Downs, through Walton-on-the Hill, down Pebble Hill to Betchworth, Brockham, Root Hill and soon the Blu- Moon Café at Beare Green, where Bob was already in waiting. As numbers swelled, tea flowed and bacon sandwiches multiplied. At the tolling of the half hour it was time for the off, some opting for a shorter ride, some opting to go all the way, the ladies alas in the former camp, but promising a tea-time rendezvous at Brockham.

With grey skies and scudding clouds, the Met Office fortune-tellers were hedging their bets with evasive prognostications of scattered showers. With lunch at Staplefield less than 18 miles away, we could twiddle our way into the south-westerlies and hope to skirt the rain. After a quick scurry along the A24 it was a familiar route to Capel, Clark’s Green and Rusper. Then a quiet diversion through Wimlands to Faygate and the haul up Tower Road to Colgate.

When Blackhouse Road met Grouse Road, great was the amazement of the group to be led off the tarmac onto a bridleway through woods and down to a stream to be faced with a grassy hillock with little sign of a path. So granny gears it was and up over cow pats and thistles to the blustery ridge, where the path emerged, soon to become a farm track of concrete slabs through the fragrant yard of Newstead Farm to join the High Weald Landscape Trail. This led us up to the B2110 from which it was no more than a couple of miles or so through Slaugham to our staging post of Staplefield, occupied already by the MG Owners Club. 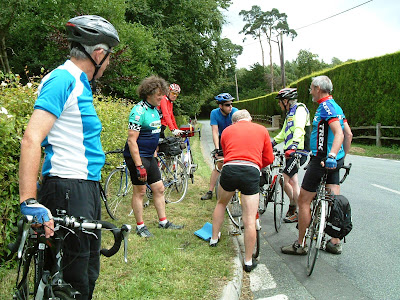 Decision Time again: The Victory or The Jolly Tanners? Victory for The Victory. Staple food taken at Staplefield, then up and away – destination Balcombe. However, at Balcombe Road, a first aid stop for repair by committee of Andy’s antique Carradice and route revision, as plan A via Ardingly Reservoir might not get us home in daylight. We therefore took to the B2036 through the outskirts of Crawley (in time to find the first and only shower of the day), then Gatwick, Charlwood, Leigh and Brockham.
We arrived at the tailend of the Victorian Fair, well in time for tea and cakes and to greet some easy riding ladies, who had been on what I understand is a traditional treasure hunt. Time then to wend our separate ways in pleasant, early evening sunshine. For me, a final fling up Pebble Coombe, then home with one mile short of three score miles and ten behind me, for some no doubt a good few more. 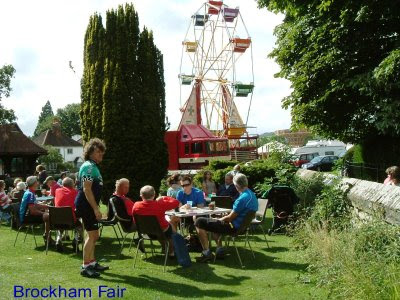 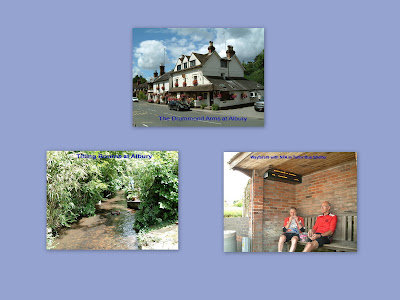 Just four set off down my Ruxley Lane route. At St Ebba's, last of the "hospitals", I was startled by previously unseen brick mountains and an embryonic cyclepath heading towards Epsom. Jake caught us at the Wells and together we headed down into Leatherhead, along the Lower Road before finally climbing to a new teaspot at Polesden Lacey where numbers by ones and twos grew eventually to 16.

Wisely most declined an offroad sortie as extended gardening for Ed and Pam at High Barn was needed before battle could recommence with the black stuff. At the start of White Down we rendezvoused with those who had come more quickly via Bagden Lane and Ranmore Church. Sensing the mood I kept it short and sweet: The Volunteer, Hoe Lane, Albury Heath and a final swoop down to the Drummond Arms for lunch. As is becoming the norm, this was either roast or soup. Ed, Jeff and Terry holed up in a bus shelter complete with electronic indicator but no buses whilst Bob and I settled for a more salubrious spot by the church. My return to the pub prompted an mass but unexpected exodus by the rest of the C&M who had basked beside the Tilling Bourne.

Divers pressing appointments meant that only four tackled the resurfaced but already falling in disrepair Cote Du Fond De La Cuvette (Coombe Bottom for non-linguists). HMP and the Black Swan where Terry turned were familiar sights before we reached a revised and lengthy tea stop at Shoots (previously Seymours) Stoke D'Abernon. That was little more than 50 miles door to door on a fine warm day ended by a spit of rain around five.
Posted by Anonymous at 12:51 No comments:

It's to Felpham near Bognor. For details see

http://www.cyclechat.co.uk/forums/showthread.php?t=38071
Posted by Anonymous at 08:54 No comments: 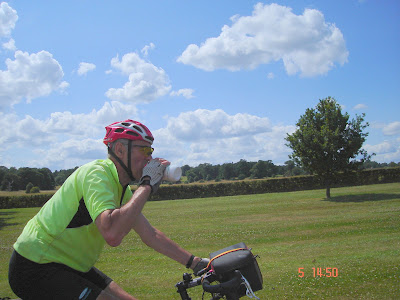 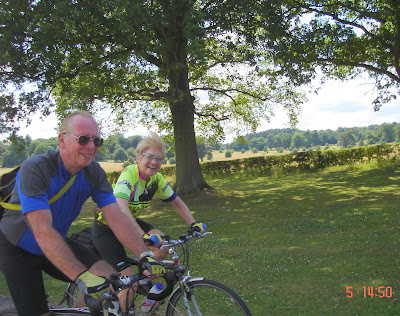 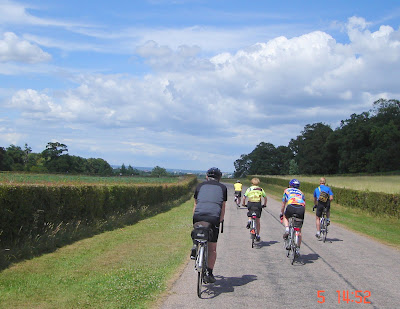 Posted by Tartan Socks(long) at 19:55 No comments:

As Cody might have said "Made It Ma! Top Of The Beacon" - that's enough of Saturday (see CycleChat or Yacf for more).

Half a dozen at Kingston Bridge joined the authentic Wayfarers' route in Weston Green and sampled Hersham Walton Weybridge and Addlestone. Fine weather drawn 19 (plus Squirrels) to a packed Fairoaks Airfield. Custom cars gave some clue to other visitors but was Jacques Rogge present in Jag 1OC?

Thirteen opted for Irene's serpentine route. Gracious Pond led on to Valley End and Sunningdale. In at Blacknest and out by Forest Lodge placed us near the Peanut from whence we headed through Cranbourne. After momentary hesitations in Maiden's Green we selected B3022 and its second left got us to The Cricketers for lunch. Here we split into haves and have nots (sarnies). In boisterous conditions our parasol was an early victim.

On automatic pilot we cruised back across Ascot and racecourse (though four must have switched off by Chavey Down and had to be shouted at). In at Watersplash and out at Bishopsgate completed our set. After Tite Hill and level crossing 1 we were held at the second by Staines. The Squirrels were awaiting; Lemon Drizzle vanished instantly but Honey and Marmalade needed pushing. And so after a decent interval another ride was over.
Posted by Anonymous at 06:57 No comments: 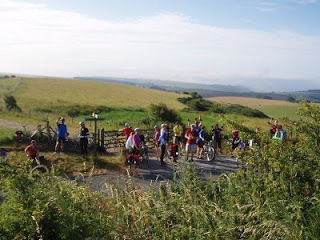 Some of the Riders, approx 60 in all at the top of Ditchling Beacon &am Saturday morning. 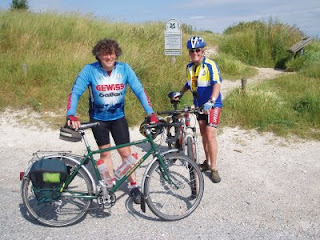 Graham and me en-route back, again at top beacon 10.30am, what a ride for Graham he started from Marble Arch at midnight. Apparently a fabulous moonlight warm night with some mist and mellow fruitfulness and good company, many doing the ride for the first time! Come on C&M give it a try its great fun and an experience even if you only do it once!! The next one is Bognor via Faygate on Fri 7th August which is the day the Birthday Rides start (Sat 8/8/09), and also I believe the VCC 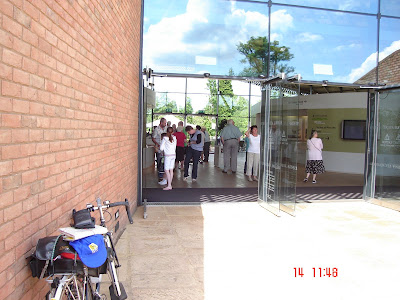 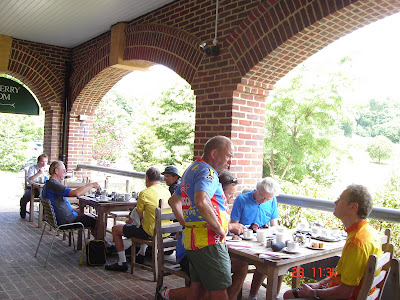 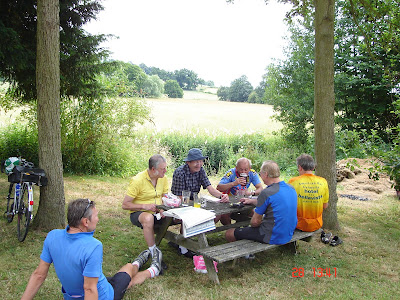 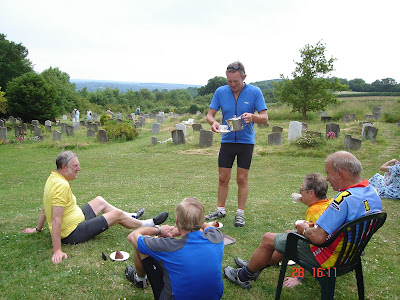 At the start of this summer’s heat wave Ed, Andrew, Steve and Mike set off at 0910 – it is quite a way to Chartwell so no lazing about at N. Cheam on this Sunday.

Across Farthing Down (Mike says he prefers this to Beddington and Purley but in truth it’s the only south-east route he knows) and then to Caterham. A few hills until the welcome downhill from Botley Hill. Pity the poor souls at Westerham going to the Biggin Hill air show, a hot morning stuck in their cars and, with horns blaring, signs of impending road rage. Fortunately it is only a short distance to the Chartwell turn-off and, a little after the appointed time, we arrived to meet Andy, Jeff and Ian. Although the car park at the home of the nation’s former leader was beginning to fill it was pleasant to sit outside at the coffee shop.

Shortly before noon we set off for Penshurst. A little way down the road and we turn onto Puddledock Lane. This is a little like those hills you climbed years ago in the Lakes; it is not far to the top now, what was all the fuss about, only to realise that it is not the summit at all and there is a long slog ahead. Puddledock starts with a short climb and then a nice stretch of downhill before the relentless steep climb. The reward is the view at the top across the south-east.

It was the ride leader’s initial plan to continue up and loop round Ide Hill but, he facing the fate of Captain Bligh on this sultry day, we headed down to Bough Beech reservoir, at this time of the year not many twitchers there.

Penshurst is another ‘false friend’. Pedalling past the station the expectation of lunch is in the air. But no, it is another couple of uphill miles to the village. Lunch at the Leicester Arms (Mike recommends the beetroot soup) and lazing at the foot of the garden by the stream with an in-depth discussion on the musical legacy of one M. Jackson.

After lunch we pedal, along a different route, past Chartwell again, Andy puncturing at Bough Beech. Billowing cumulus threaten those without capes but in the event only a few drops fall. After a few hills the ‘open for teas’ sign at Tatsfield is welcome. It is not long before we are joined by a former cyclist and the tea-time discussion covers frame builders that we knew before we pedal home on this warm afternoon.