I realise most of you will be working tomorrow (27/8) but if not a slice of cake is yours if you pop into Weybridge Day Centre tomorrow morning. See Wayfarers blog for image.
Posted by RaasayWarden at 11:33 No comments: 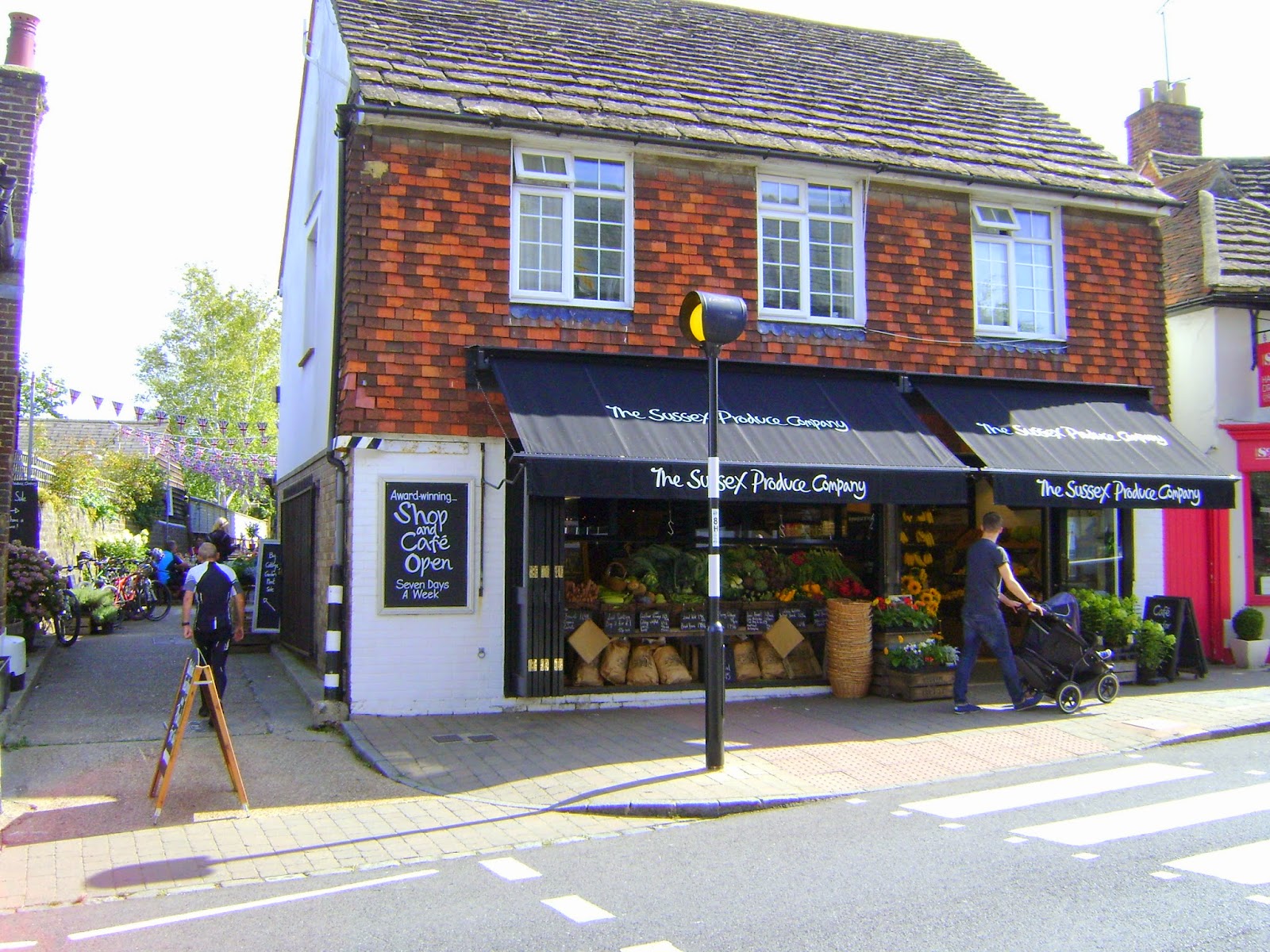 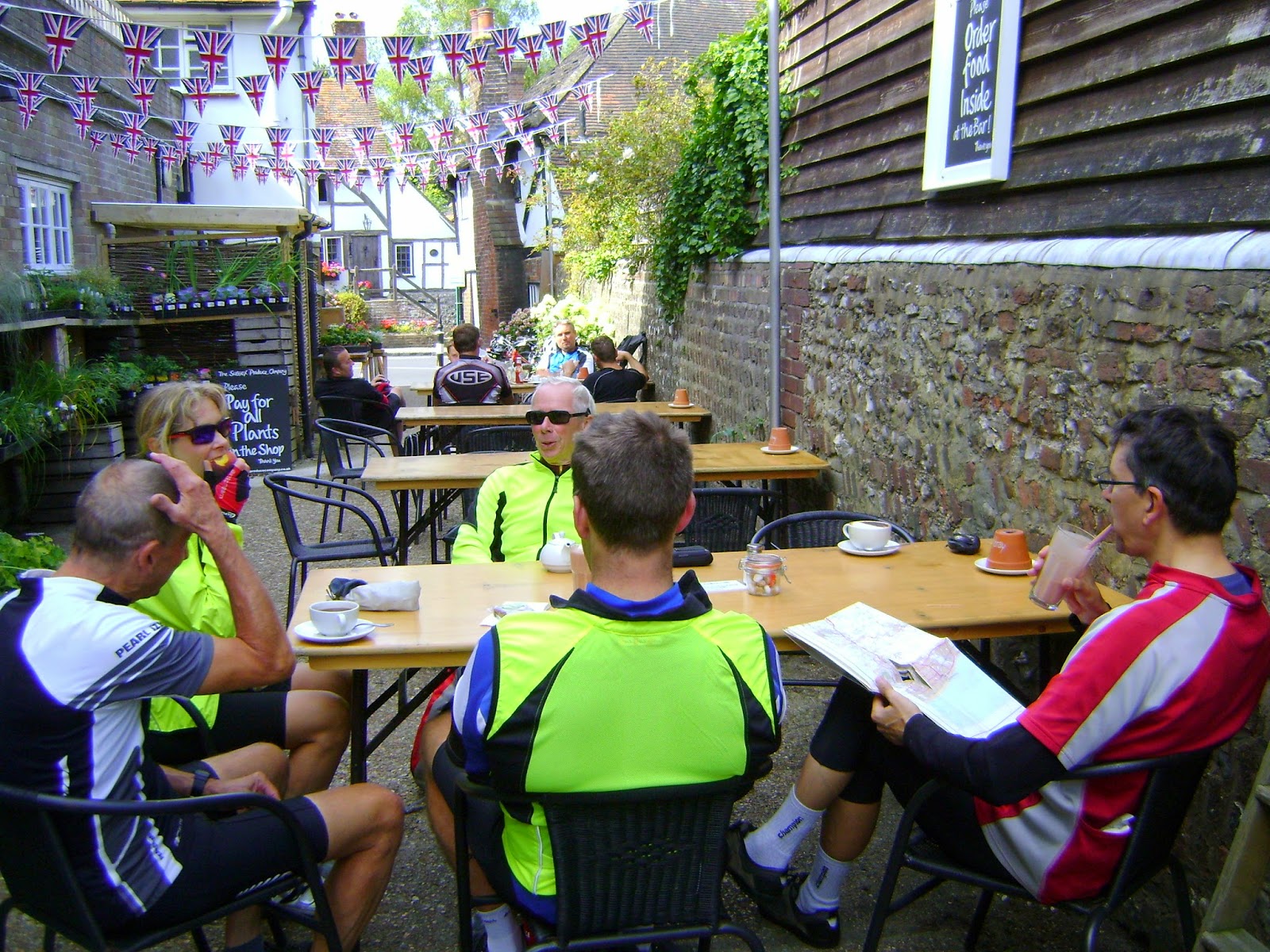 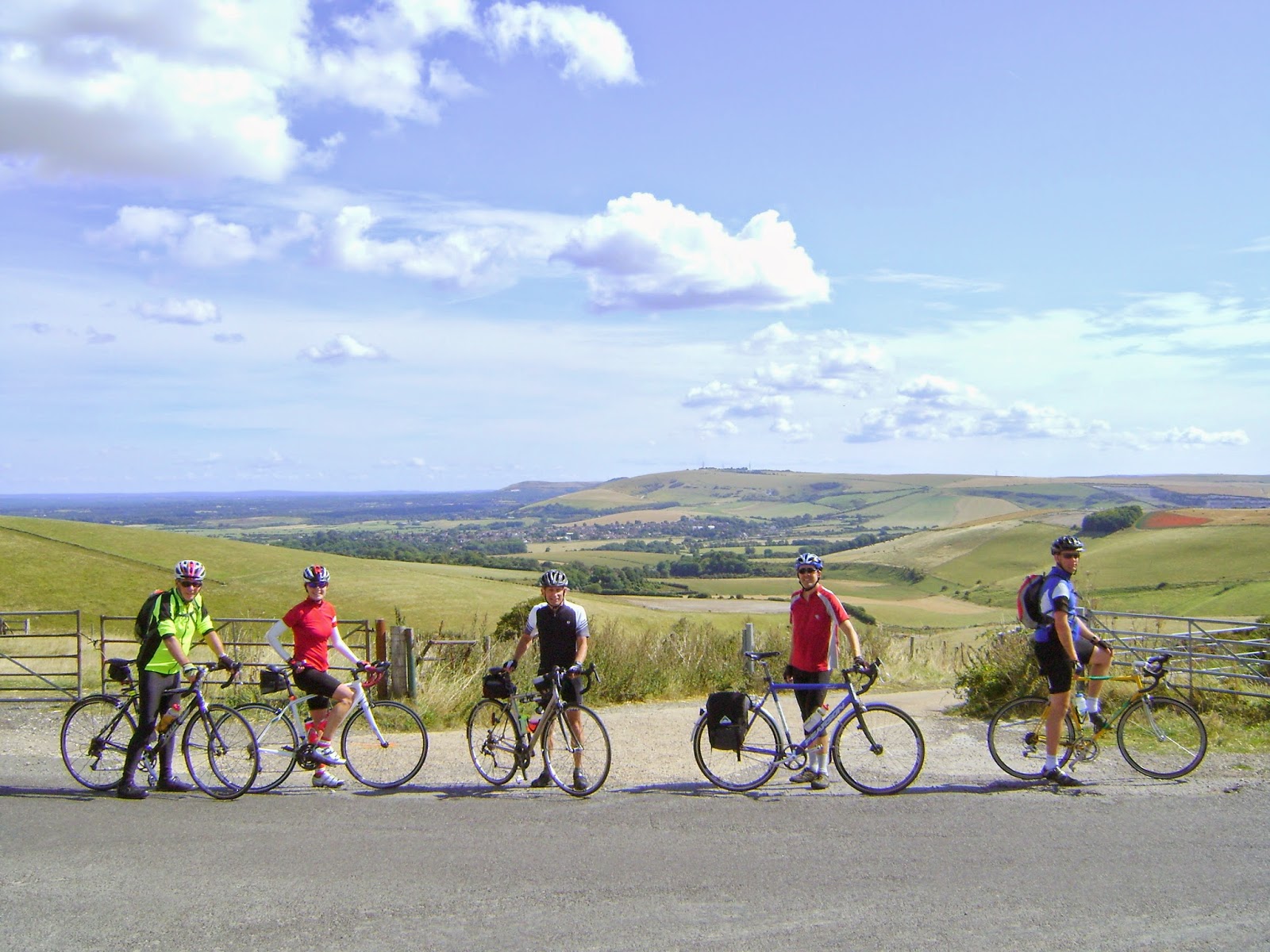 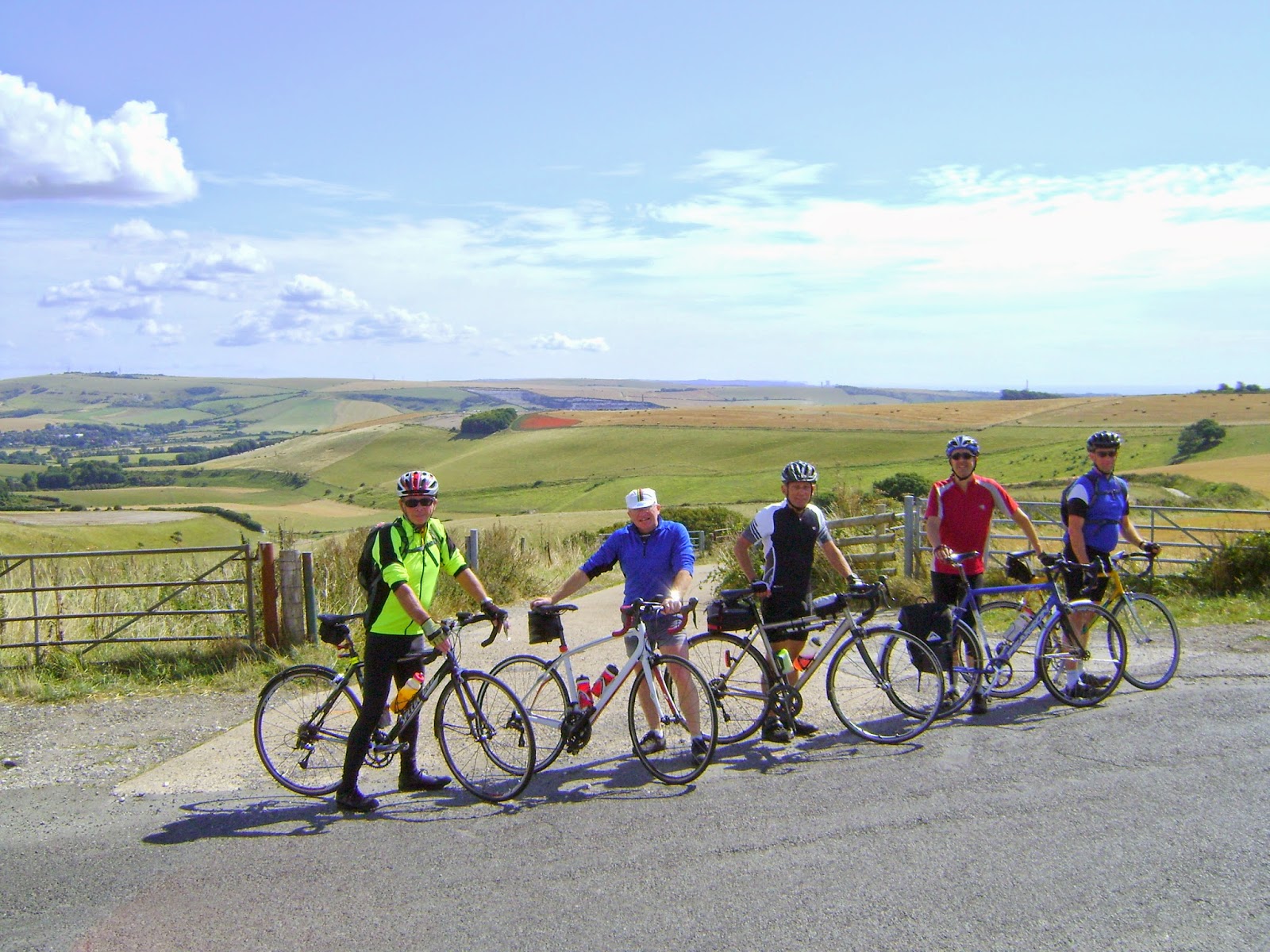 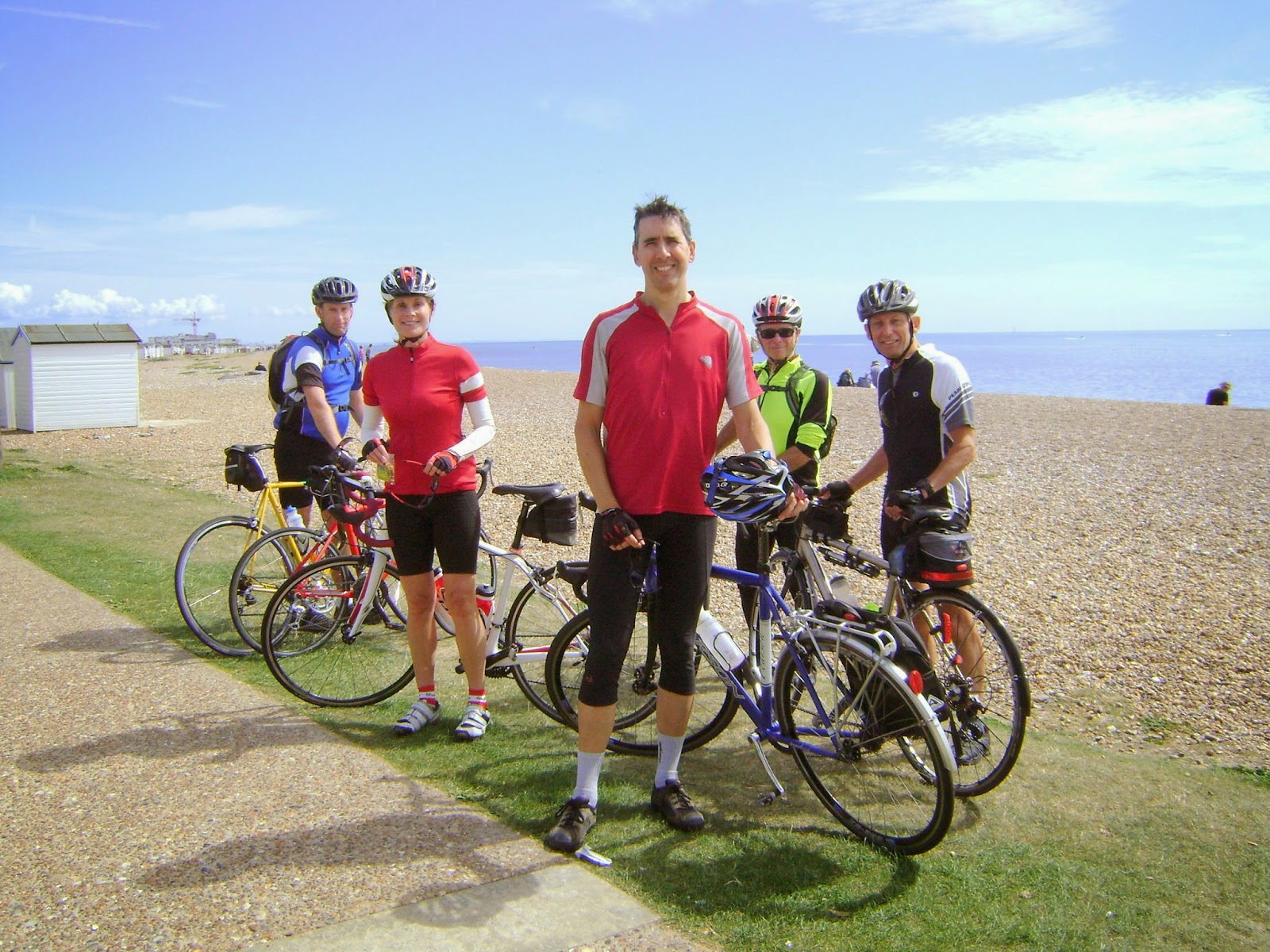 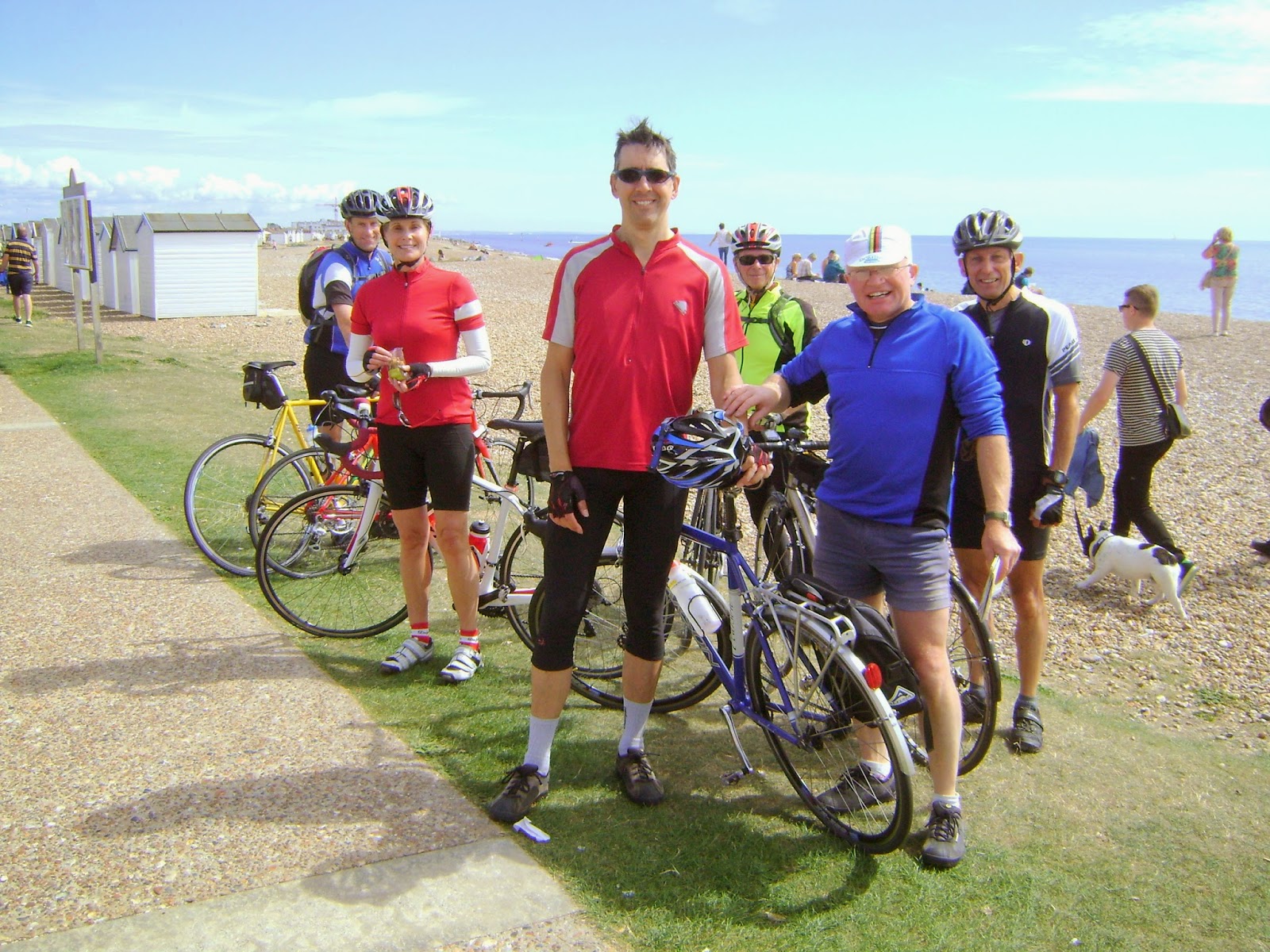 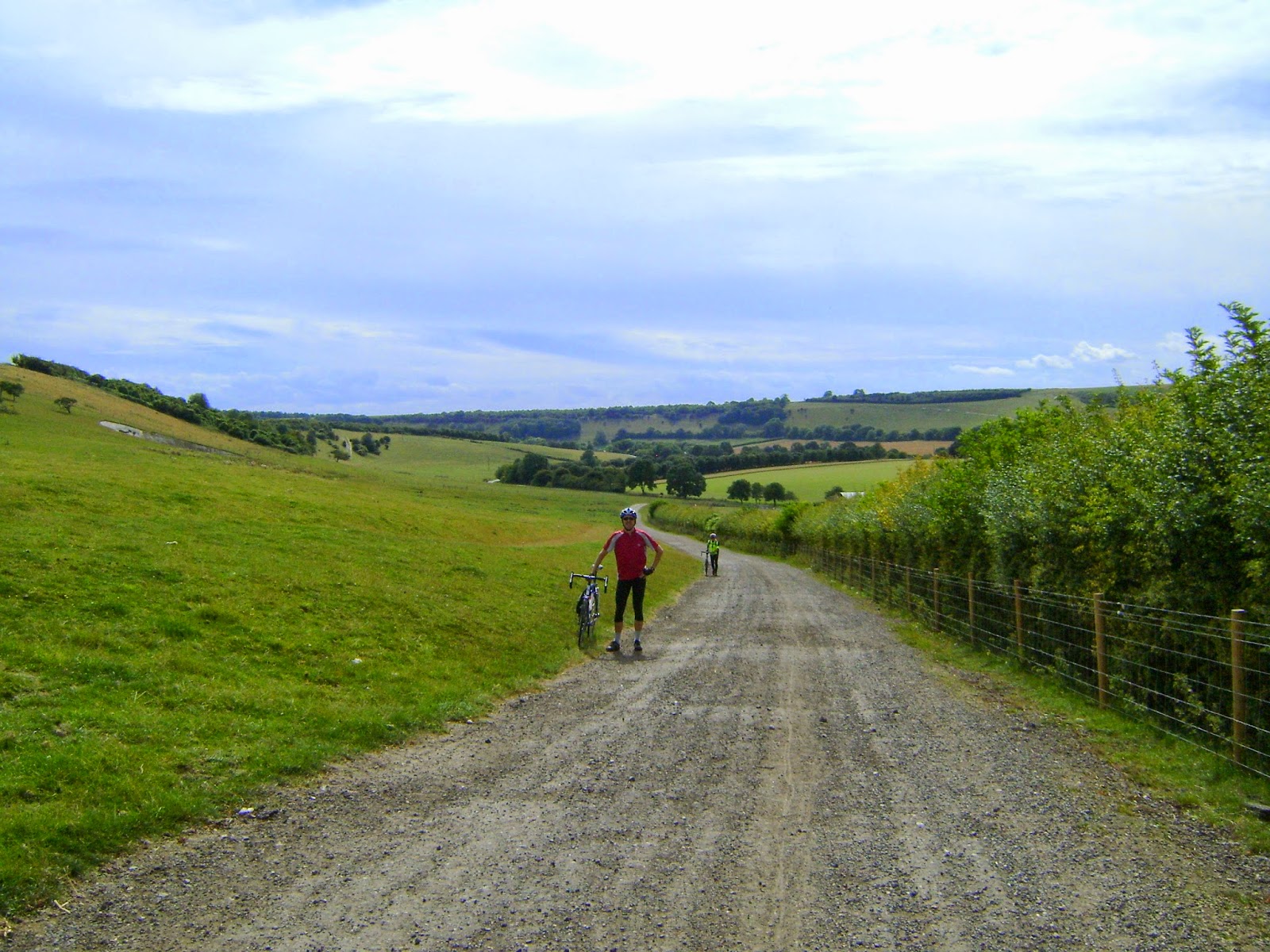 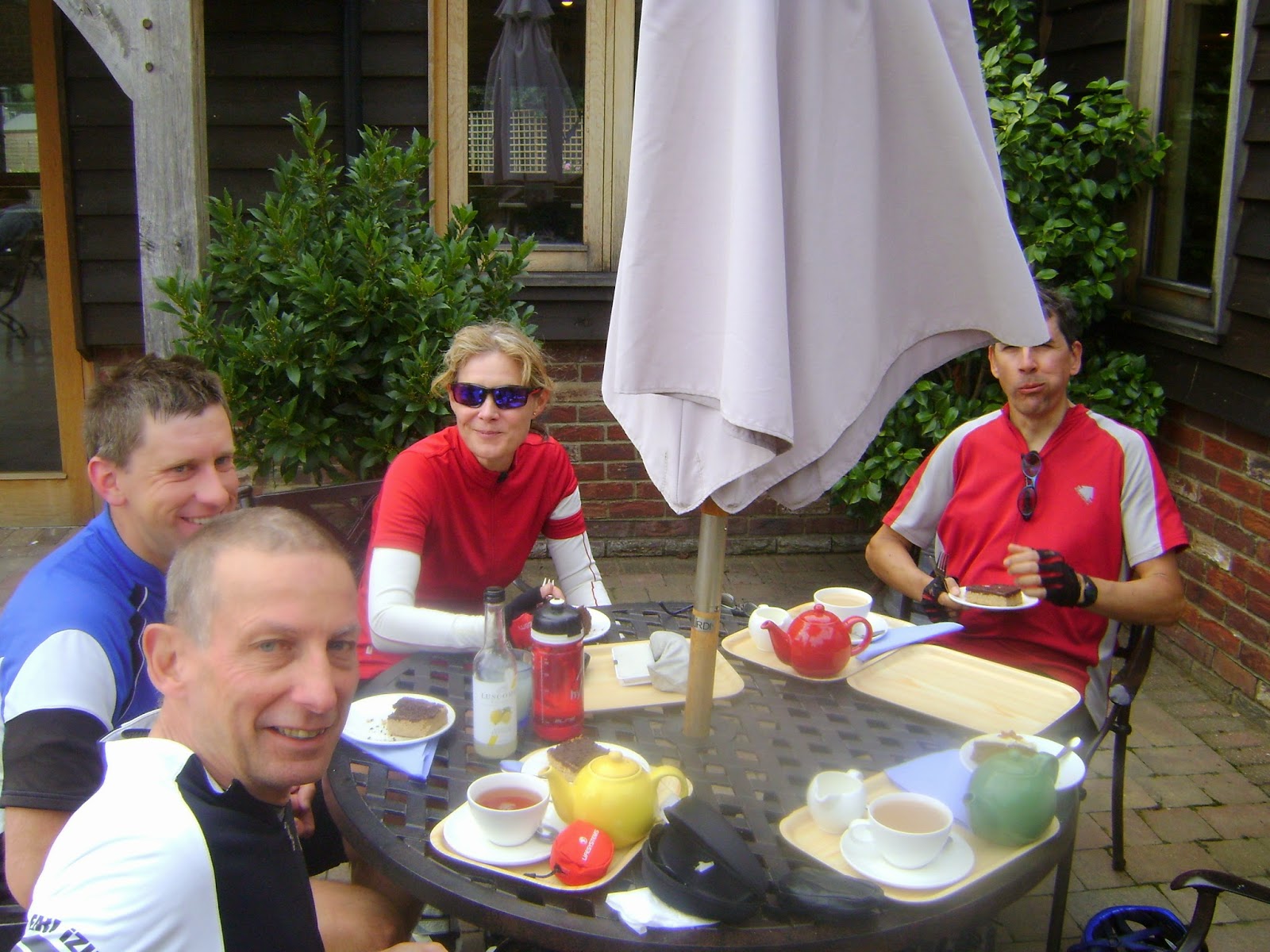 A unseasonably VERY cold  late August early morning 8° but that didn't deter five hardriders.
Typically, I set off way too fast for most and was soon getting a severe telling off (b*llocking) as we passed the "West Sussex" sign at around 8.40am.
Happy to slow down we were soon tucking into W'spoons' breakfast bap and drink (£2.29).
There was some confusion about Daniel's order but it meant he ended up eating a full english and a breakfast bap!
Also typically, Jeff arrived as we were leaving 9.40am but Stenying and the South Downs beckoned.
To be fair, any folk wishing to meet up on a coast run are unaware of where we'll be at certain times so from next year, I'll carry my mobile so organising a rendezvous would be simpler.
Apologies to Terry & Richard who missed us at Horsham.
So continuing south through Southwater, Dial Post, Ashurst to Stenying 10.40am.
I picked the first cafe I saw and that was the Sussex Produce Company.
http://www.thesussexproducecompany.co.uk/
Two chevrons a little way apart led us up onto the delightful road that drops down to Sompting.
I elected a short detour to Lancing to pick up the coastal cycle path (midday) and arrived at the designated lunch (Sea Lane cafe - Ferring).
This was the first disappointment of the day because it was way too busy with the queue for food out of the doorway.
After the photos we set off in search of lunch but got no further than 100yds...........a thorn puncture for Dave.
Fish and chips for me at The Mulberry Tree pub £4.99.............the plan B lunch stop.
Then Clapham, Storrington, West Chiltington, and the long road north to tea at Newbridge.
It was 4.15pm by now and Stooks shuts at 4pm on a Sunday...........but remarkably the owner called us back in offering tea and cakes but no coffee.
We were less than satisfied with the poor quality, overpriced cakes (my stem ginger traybake was too dry) but beggars can't be choosers and perhaps the free cheese scones the owner offered helped restore faith in this establishment!
Some chose to go their separate ways as far out as West Chiltington (Jeff) .........Dave (Friday Street) and I took flight from Janice & Paul at Blackbrook deciding the climb to Headley (pain) for the downhill run into Epsom (gain).

A coolish day for late August 20° but mostly sunny.
Probably 100 miles but for me it's always about quality over quantity.
An enjoyable dayout that for the most part went as planned.
As I write, on this Bank Holiday Monday........it's raining of course!

Take a look at these three short films of cycling in six cities around the world.........but don't bother with London, we've heard it all before.

No room at the Inn!


As Fairoaks aerodrome is in an area little trodden by C&M I thought a trip further West would be a change. Going West of Camberly and through Sandhurst we skirted Bracknell just touching the edge of Wokingham. Finally reaching our lunch destination the Jack O'Newbury pub at Binfield only to be told by the landlord that there was no room for 6 weary cyclists! (Graham had his sandwiches) The Garden was completely empty and the Sun was out and we offered to sit outside but no we were turned away!

Luckily there was a much more amenable pub (The Stag & Hounds) at the junction of Tilehurst lane and Forest road. Our hunger abeited and our thirst quenched we set off for tea through Moss End, Maidens Green, the peanut and and the delightful views in Windsor Great park and the welcome descent of Crimp Hill to tea at Windsor farm shop.

Jeff having only sampled the soup for lunch feasted on pasty, cake and cappuccino to fuel his long ride home. Ed was headed for Weatherspoons in Staines for his tea.


The weather was generally on our side, windy at times with only one stop to shelter under trees and a generally sunny afternoon. 74 miles for me and most likely the shortest of the group. 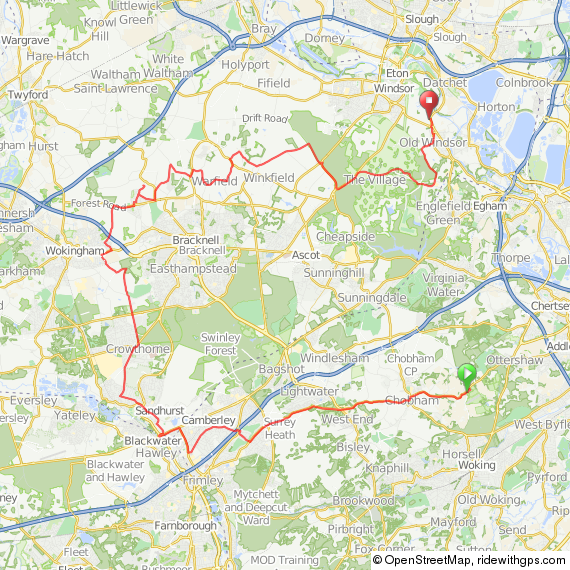 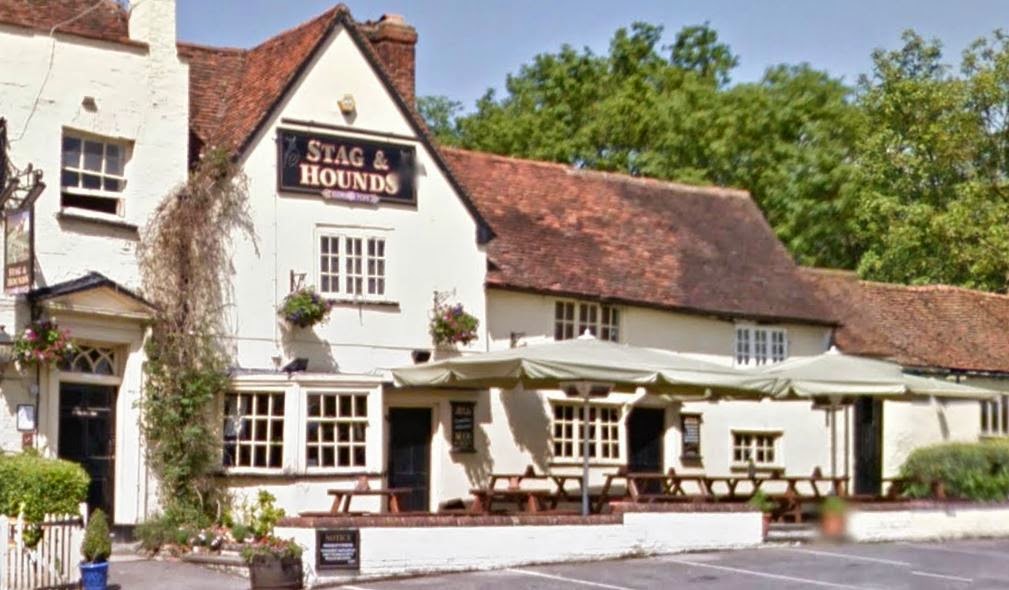 The mamil friendly Stag & Hounds offered excellent fare to the hungry C&M, who were rejected by the cyclist-hostile Jack O' Newbury. When in Binfield, we now know which hostilery to avoid.
I'm sure that Tony will provide full details of his flight plan from Fairoaks Aerodrome and novel, hedge-hopping  approach to touch down at Binfield.
Jeff
P.S. Grateful thanks to hawkeye Neil for spotting the typos. Gold star.
Posted by Jeff at 16:11 No comments: 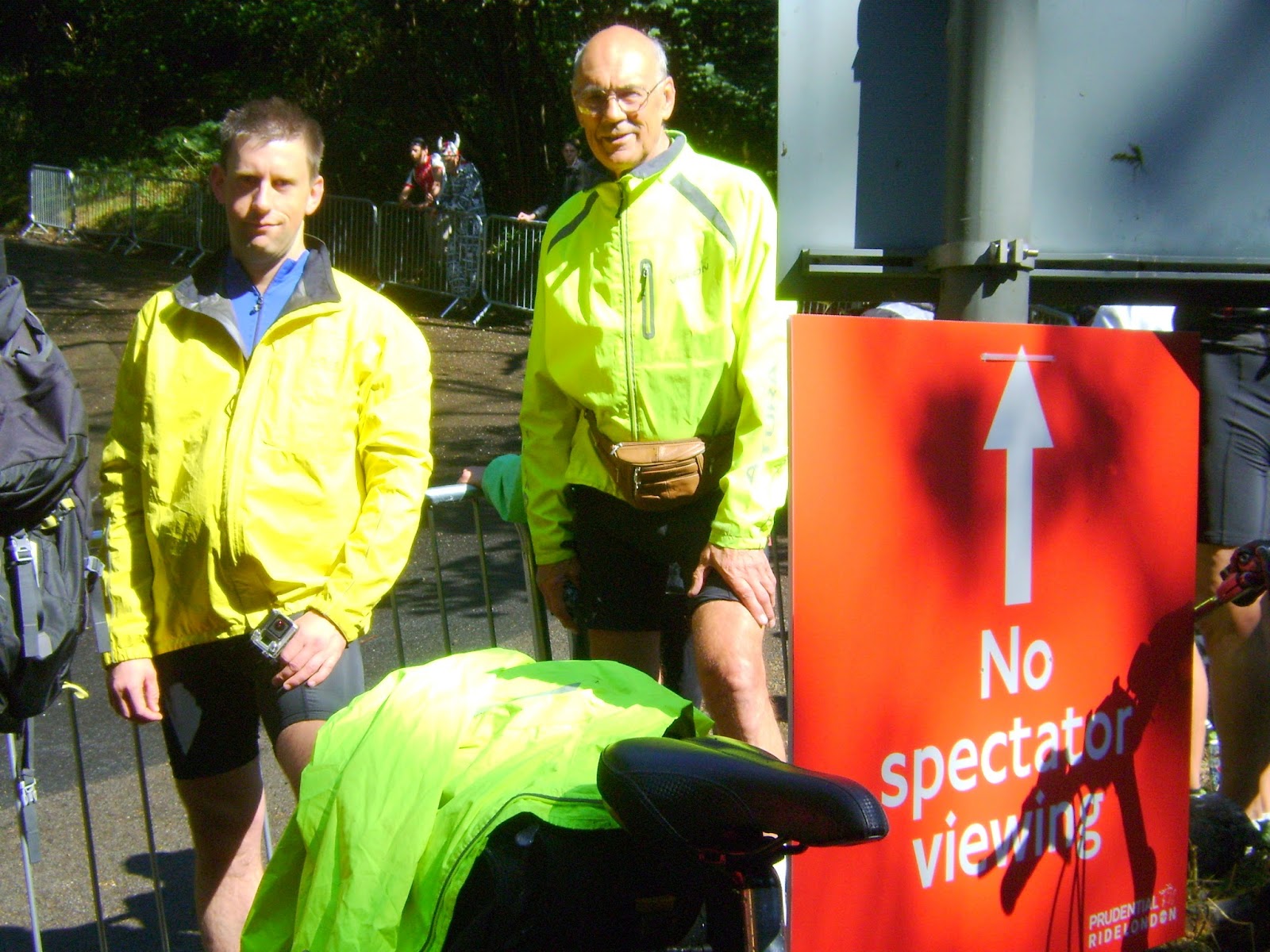 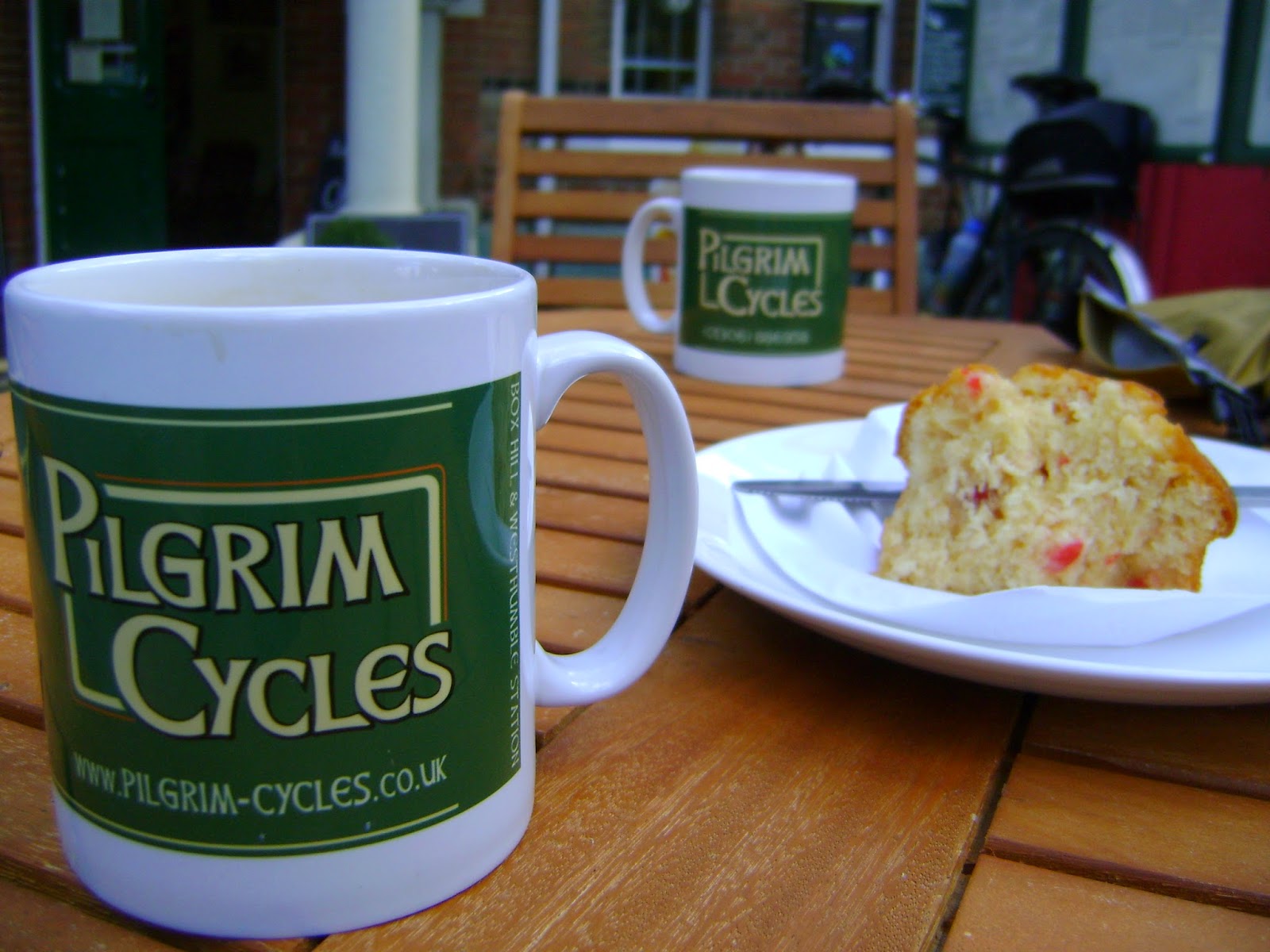 
Two expertly shot videos in HD with audio can be found here:

In addition,I saw myself on the telly!!(Very good live BBC one television coverage).
Posted by Tartan Socks(long) at 21:19 4 comments:

After 11's....... a short hop/walk/cycle to The Barley Mow at West Horsley http://www.barleymowhorsley.com/home.html
then a climb (Crocknorth Lane) onto Ranmore Common to see the riders pass the first of two laps at approx 3.40pm.
Tea would normally be available at Ranmore church but assuming the volunteers are unable to get there due to road closures we may knock tea on the head.
Posted by Tartan Socks(long) at 22:59 No comments:

I was rather concerned on Sunday that all who wished to cycle with C+M would not have seen  the notices saying that I had changed the elevenses venue from Boulters Lock to the Dorney Kitchen café - but with the assistance of Tony and Graham, the message had been received!
Nine of us gathered at the cafe, Bob stayed and did his own thing, Alan continued with us until he peeled off to go back to Osterley, which left Janice, Neil, Jeff, Graham, Ed, Vic and myself to ride across bridges and through lanes to Hambleden for lunch.  Bray, Waltham St Lawrence, Upper Wargrave and Henley led us to Mill End to cross the lock and weir to continue the final mile to the Stag and Huntsman public house. The service was good but...food is quite pricey!   No sandwiches, the soup was definitely a starter size serving 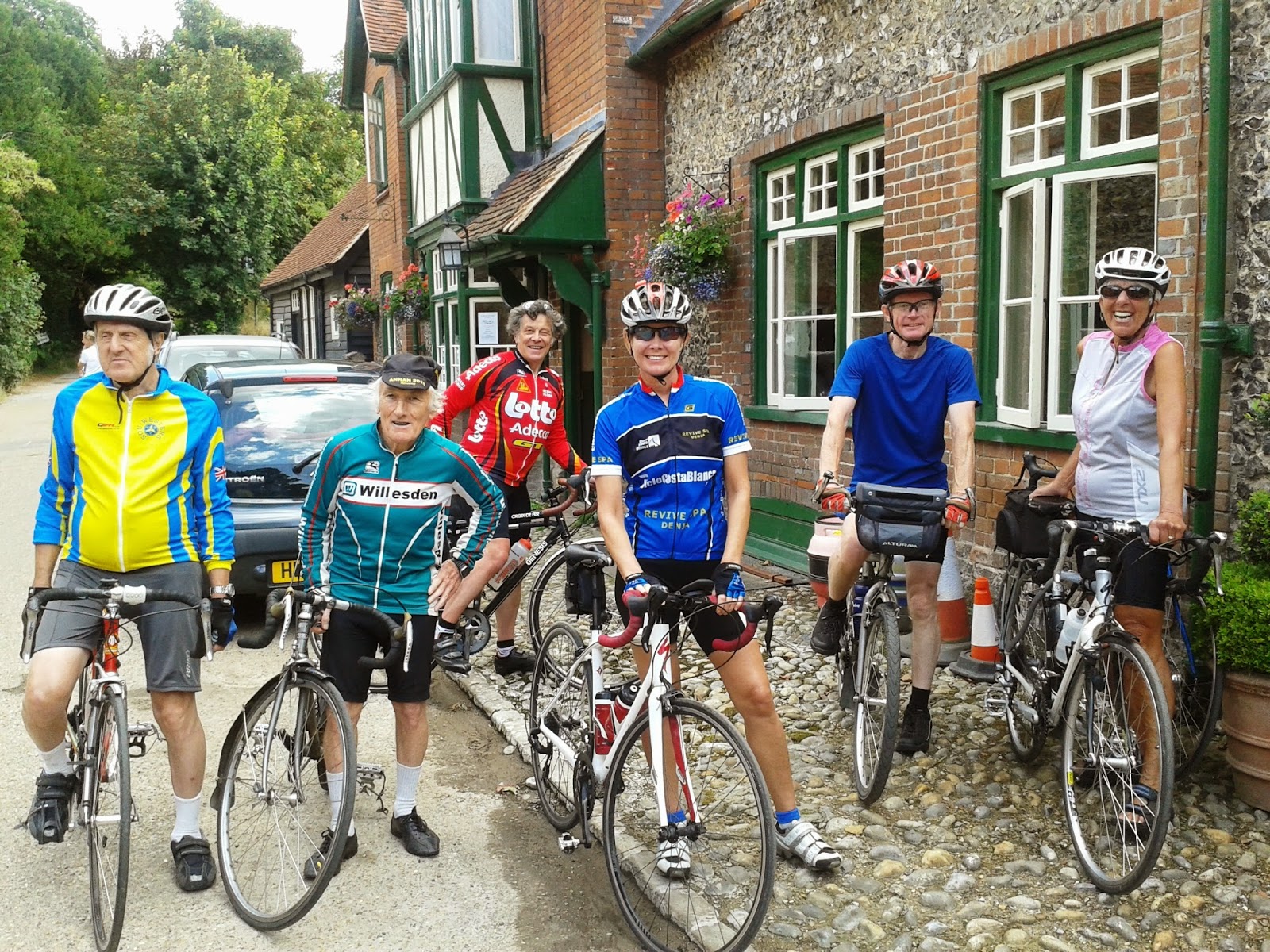 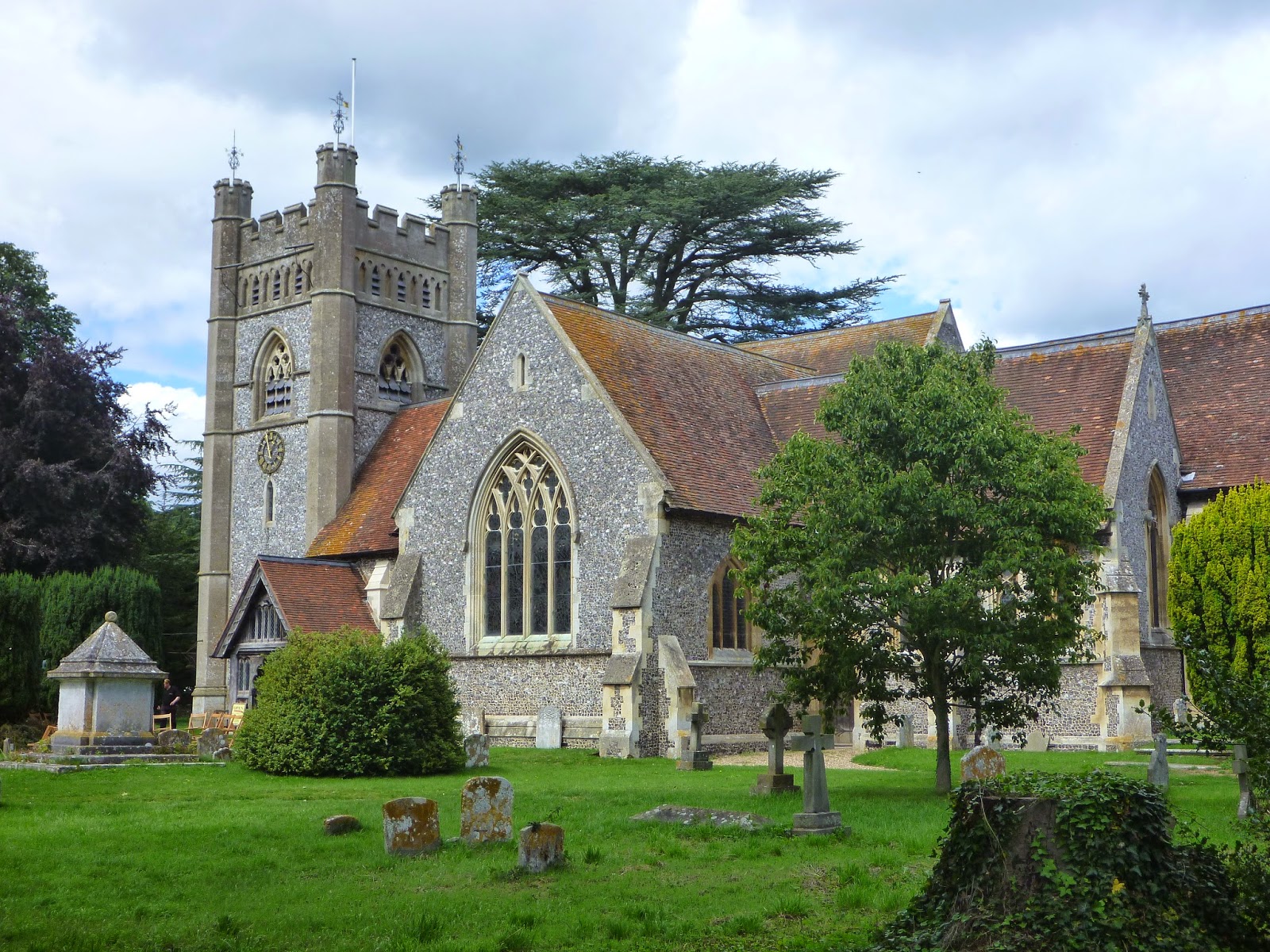 and it was £11+ for the child portion of spaghetti with bacon and cheese, plus a pint!  Four of us ate at the pub and the others either had their own or bought sandwiches at the village shop.
We left Hambleden around 1.30. going over the weir and lock, up to Remenham Hill and then we took a  route some have done before!  Through Cockpole Greeen and Warren Row to the A4.   Left and then right to White Waltham where this time we did a right before a left to take the A3024 more or less all the way to Windsor.  Tea was taken at Windsor Farm Shop/Coffee Shop where there was a very large display of vintage vehicles, plus a display of vintage bicycles manned by Bill and Margaret Squirrel and other members of the V-CC  (Veteran Cycle Club).
Here we split.  Jeff continued, no tea stop for him as he had many more miles to do,........Janice and Graham left after tea and cake, Neil sort of wandered away...then Ed, Vic and I left. I had but a short distance to my house but I went into Staines with Ed and joined him for refreshments in Wetherspoons.
I only did 58 miles but Jeff cycled 95 miles - and goodness knows what Janice, Ed, Neil and Graham did!!??
Thanks every body for it was a good day and many thanks to Vic for helping with the route plan
Pam :):)
Posted by Jeff at 19:02 No comments: