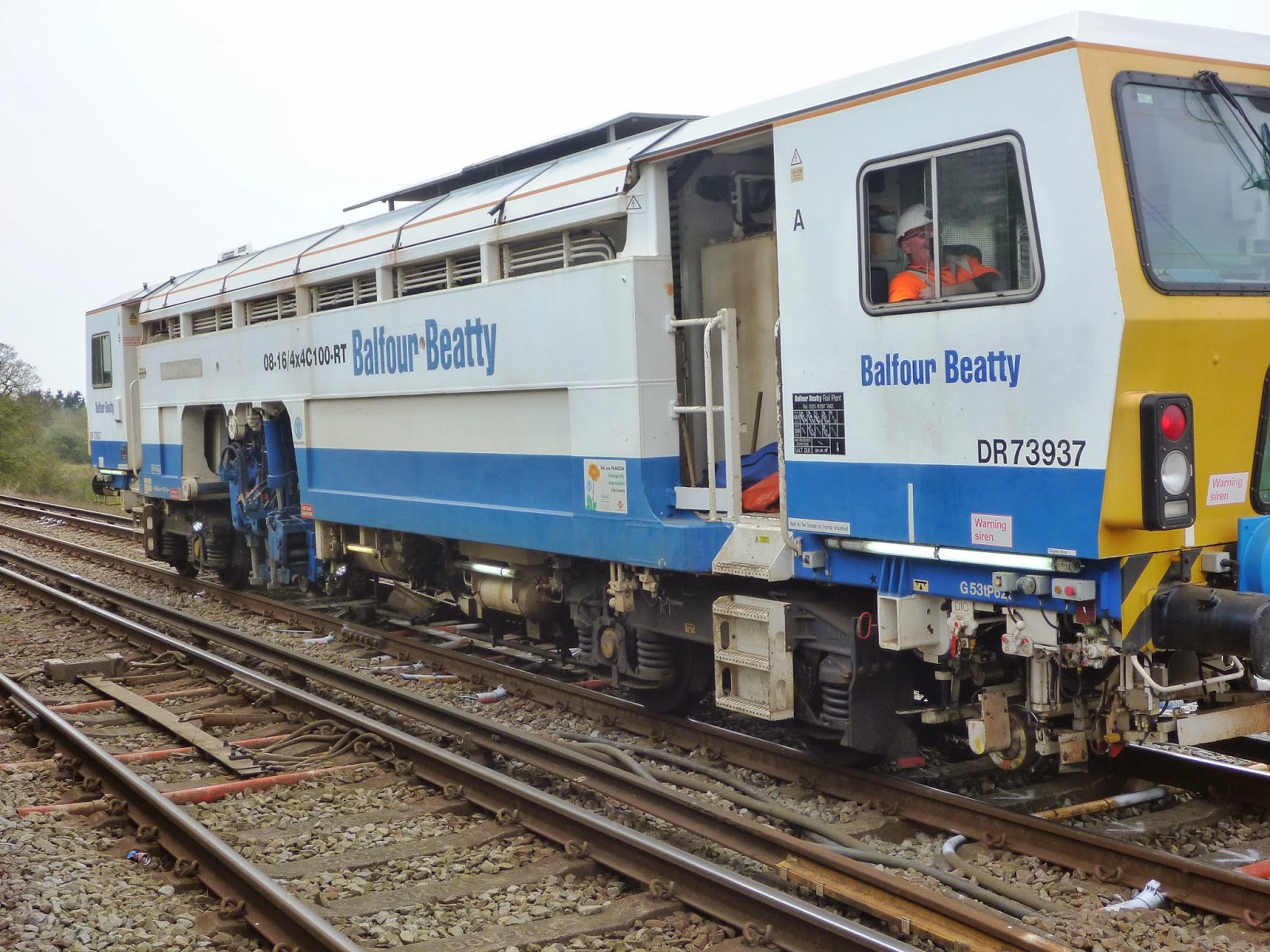 Seen on the tracks at Warnham Station 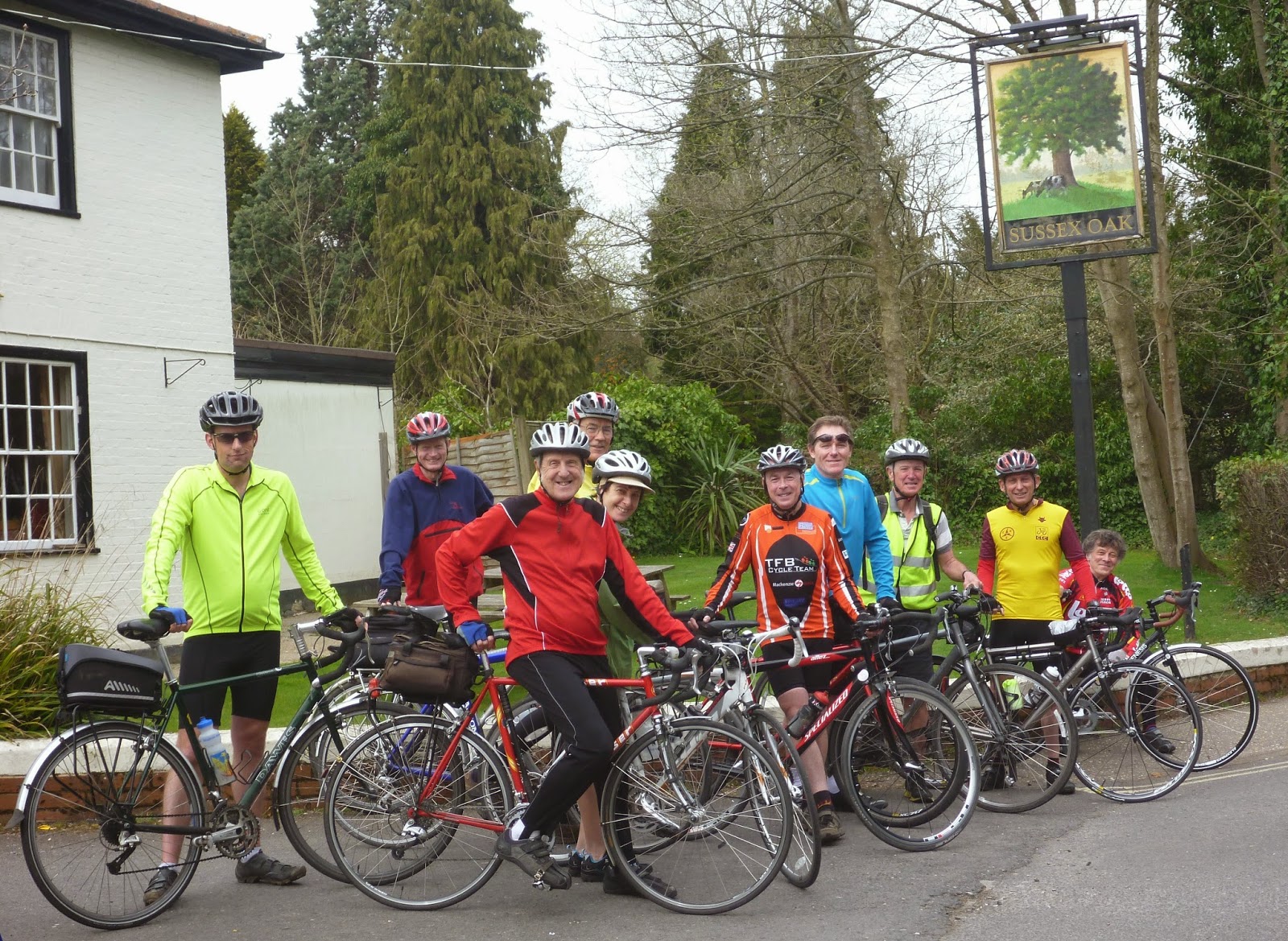 Seen beside the pedestrian railway crossing at North Farnborough 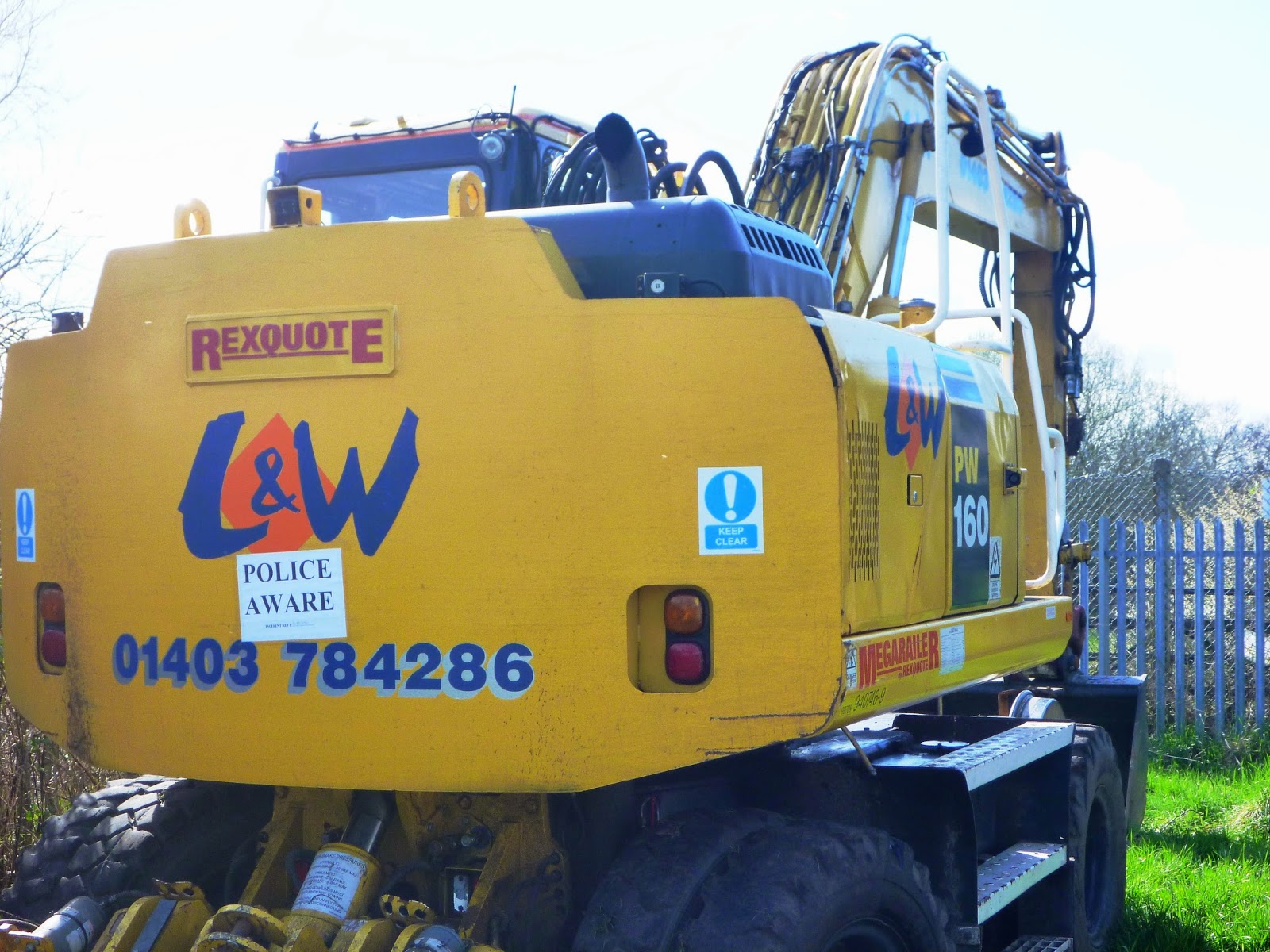 I have been reprimanded by Vic, quite rightly, for not posting this photo of a vehicle abandoned beside the railway at North Farnborough. If you know who this belongs to, please inform the Farnborough Constabulary as soon as possibe, before the vehicle is taken to the knacker's yard and crushed.

This is for comple(a)tists so I'll be brief.

The day turned out to be better than forecast. Afternoon rain never materialized so the only downers were a chilly westerly from start and two hailstorms during stage two. From the off at Hampton Court, Dave took a direct route (Molesey, Poets' Corner, Longcross) to Bagshot though a brief detour onto Walton's towpath guarantees that several bikes will be cleaned before Mothers' Day. Stage two was again direct, A30 to the Jolly Farmer roundabout, B3015 to Deepcut and Lakeside, then across the tracks to Farnborough North. We were settled in the "Tilly Shilling" Farnborough early, around 1220. With no votes for Squires Knaphill, stage three reversed to Deepcut then took the road to Pirbright. Next we headed north through Bisley and West End to Chobham and Burrowhill; our target was the Farm Shop, Lyne. A new stop, this proved to be smallish with toilet keys available on request!

Around 55 miles door to door.
Posted by RaasayWarden at 22:08 No comments:

After lunch in Farnborough, leader Dave takes it easy  while Vic is more interested in the flora and fauna. Graham is engrossed with his new Croix de Fer and the rest are keen to experience the new afternoon tea stop at the Farm Shop Lyne

Hilly 50 thanks from St. Raphael

Please go to SWLDA Blog!
Posted by mike morley at 16:42 No comments:

Because of this :
http://humanrace.co.uk/events/running/breakfast-run Dave's ride will now start at Hampton Court Main Gate at 9am.
In addition,due to a pub closure, the lunch venue will be different to the one published.
Most likely Wetherspoons in Farnborough.
Please inform one and all.
Many Thanks.
Posted by Tartan Socks(long) at 19:24 No comments: 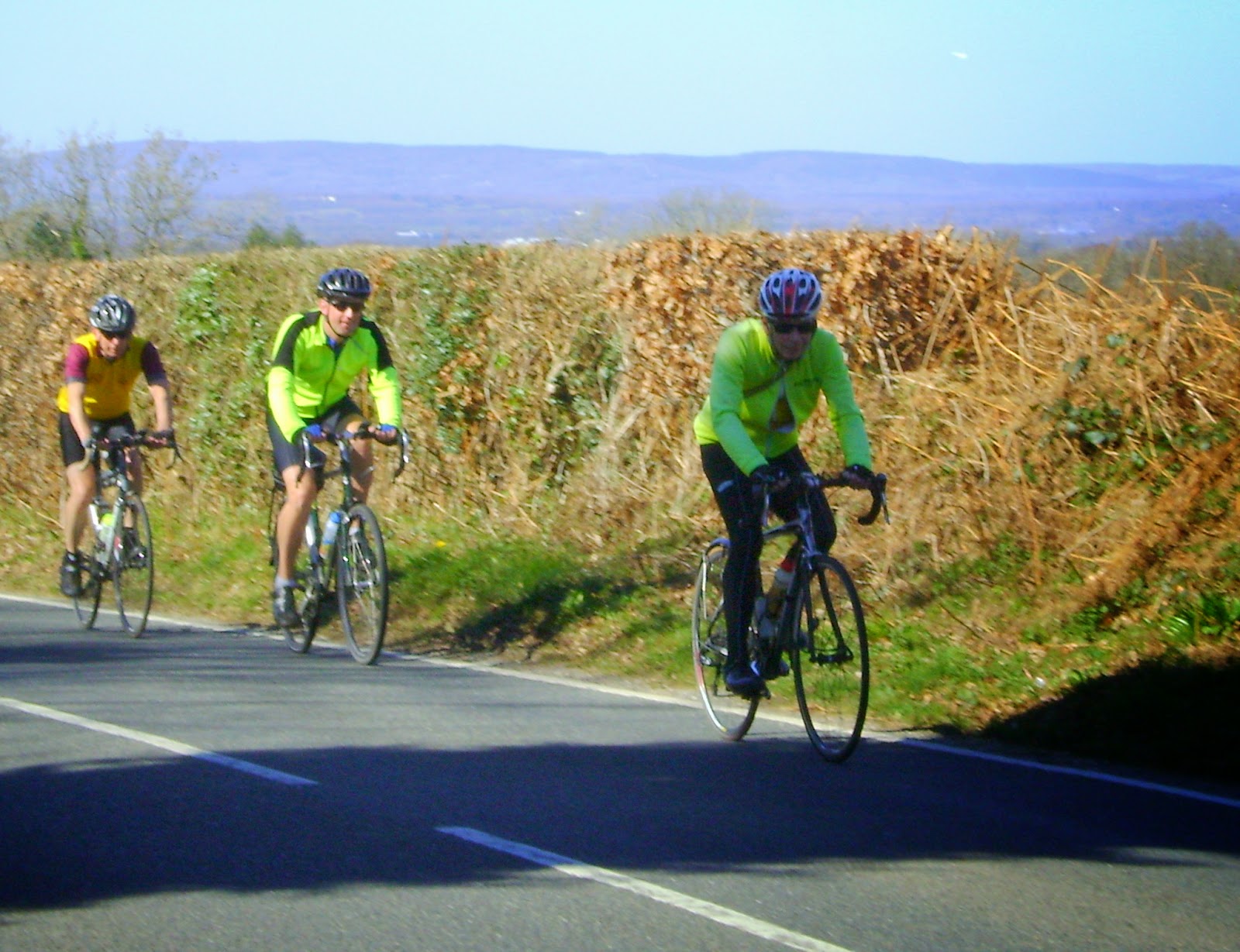 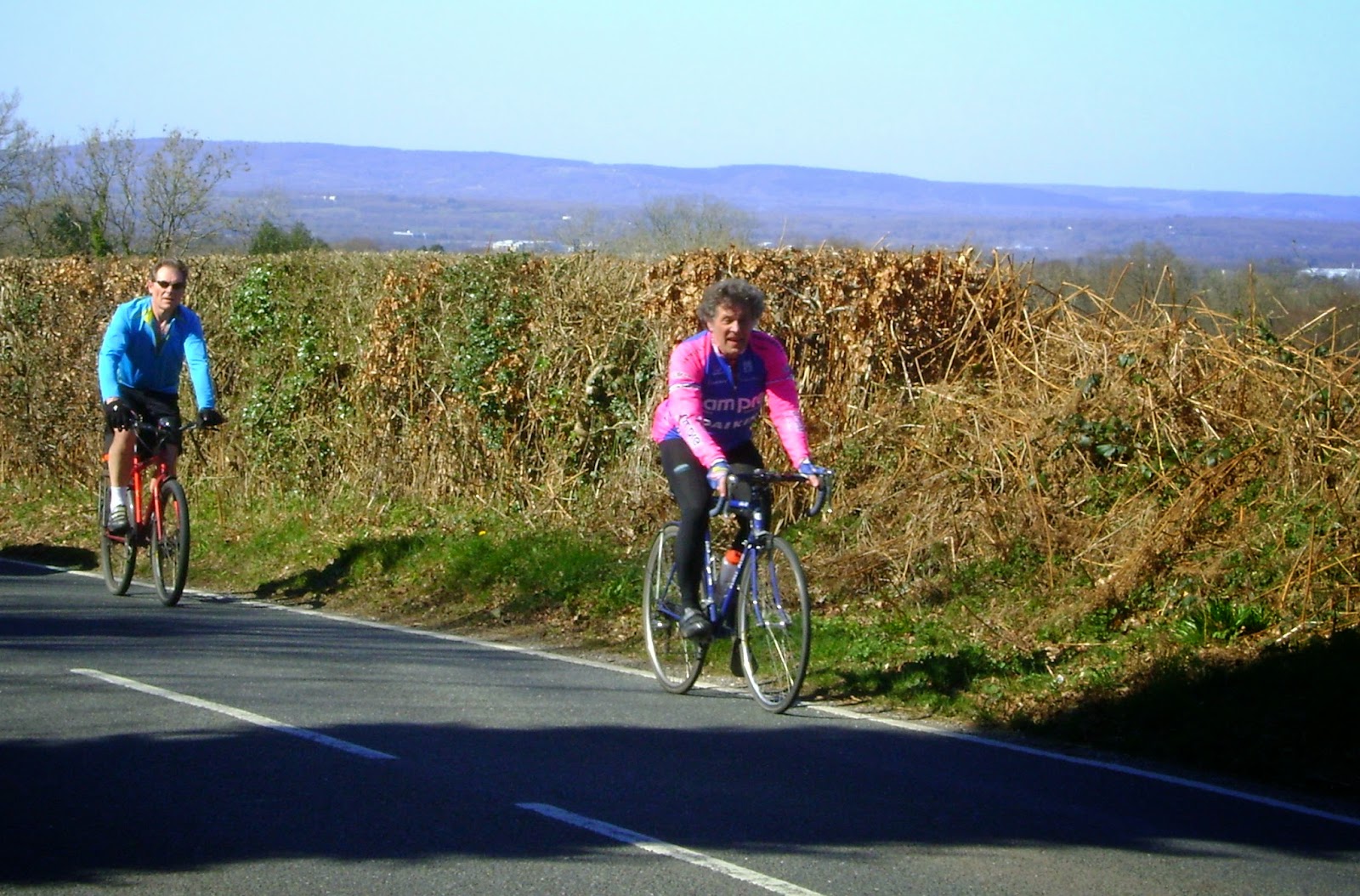 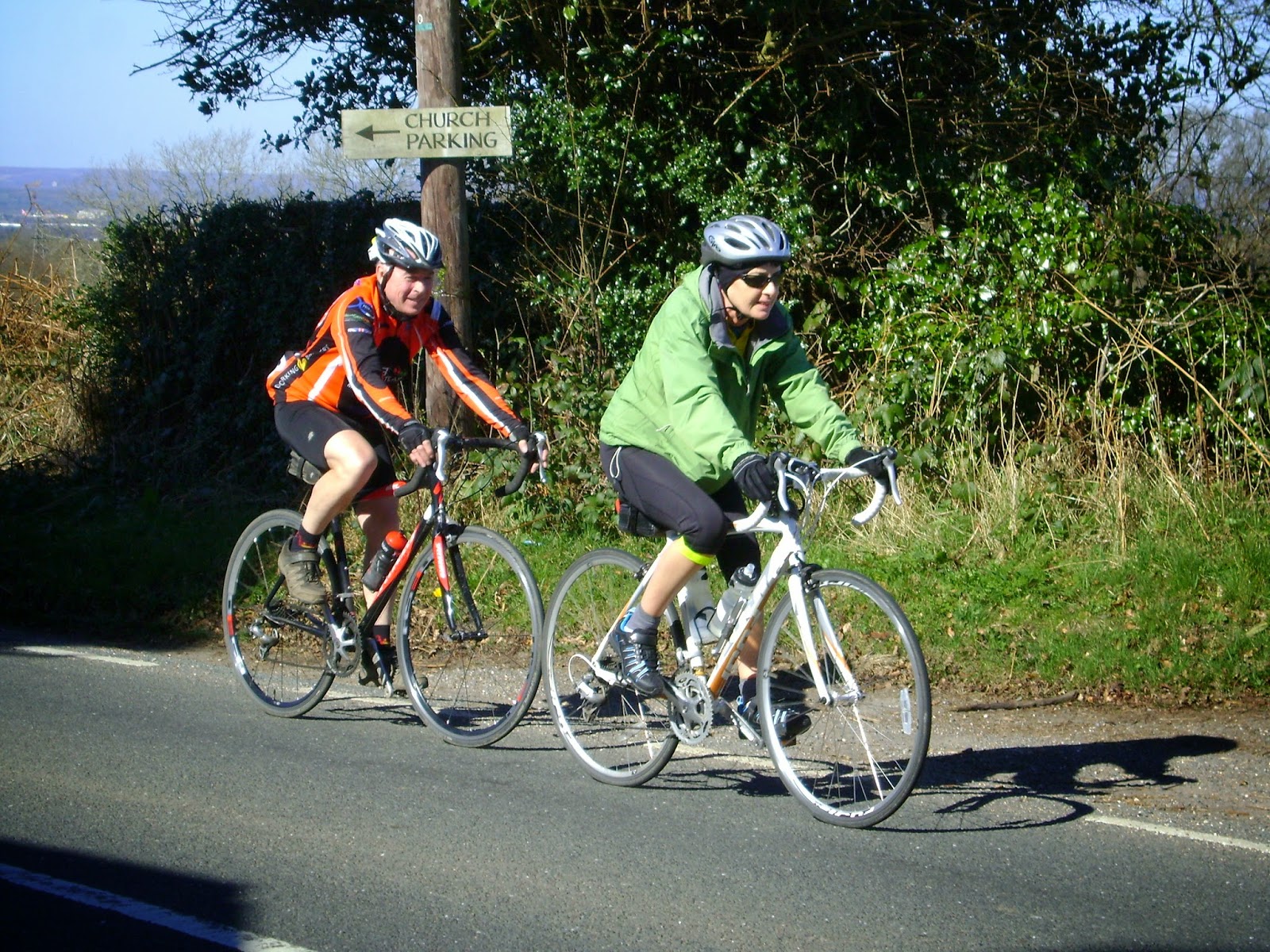 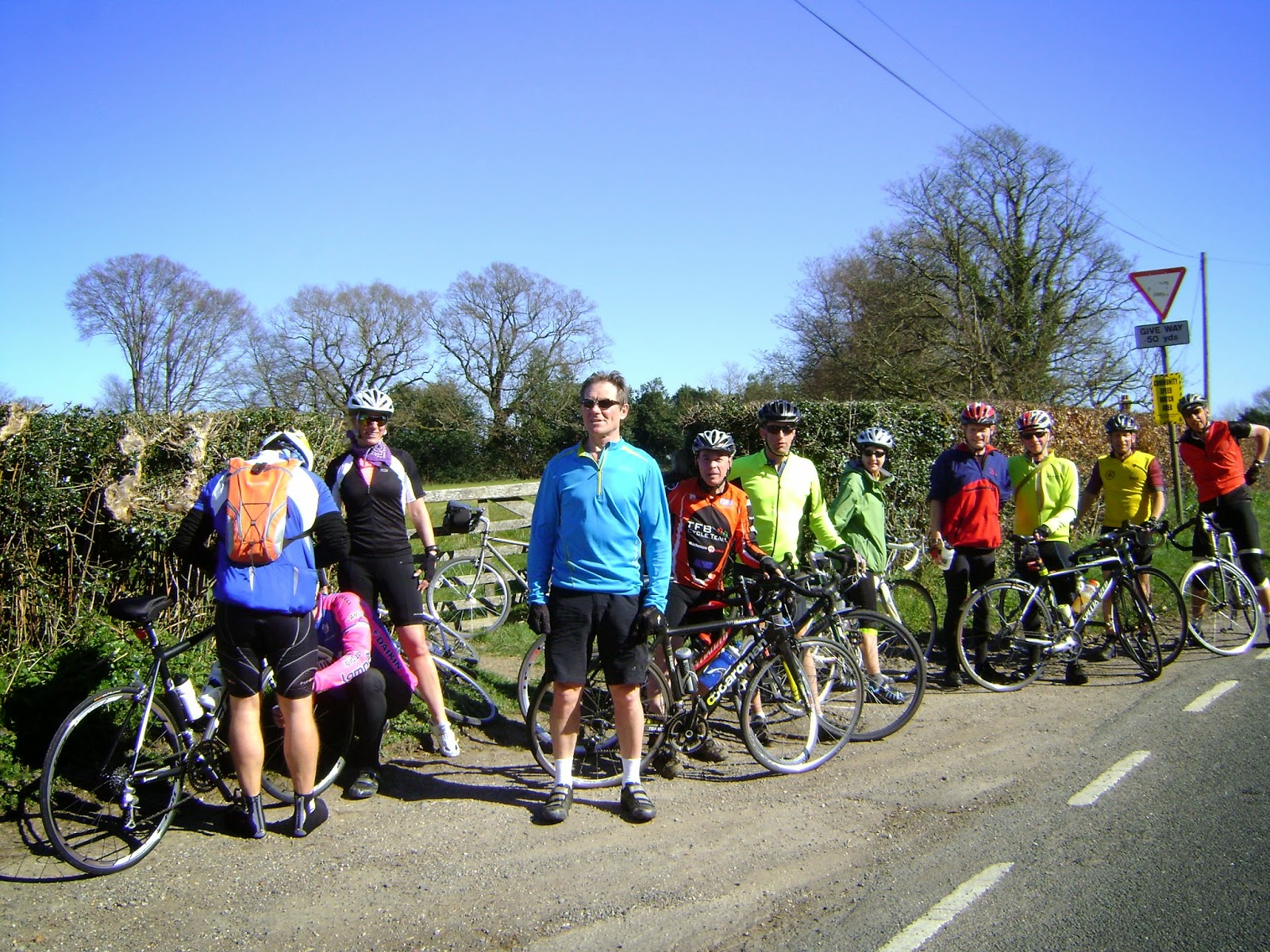 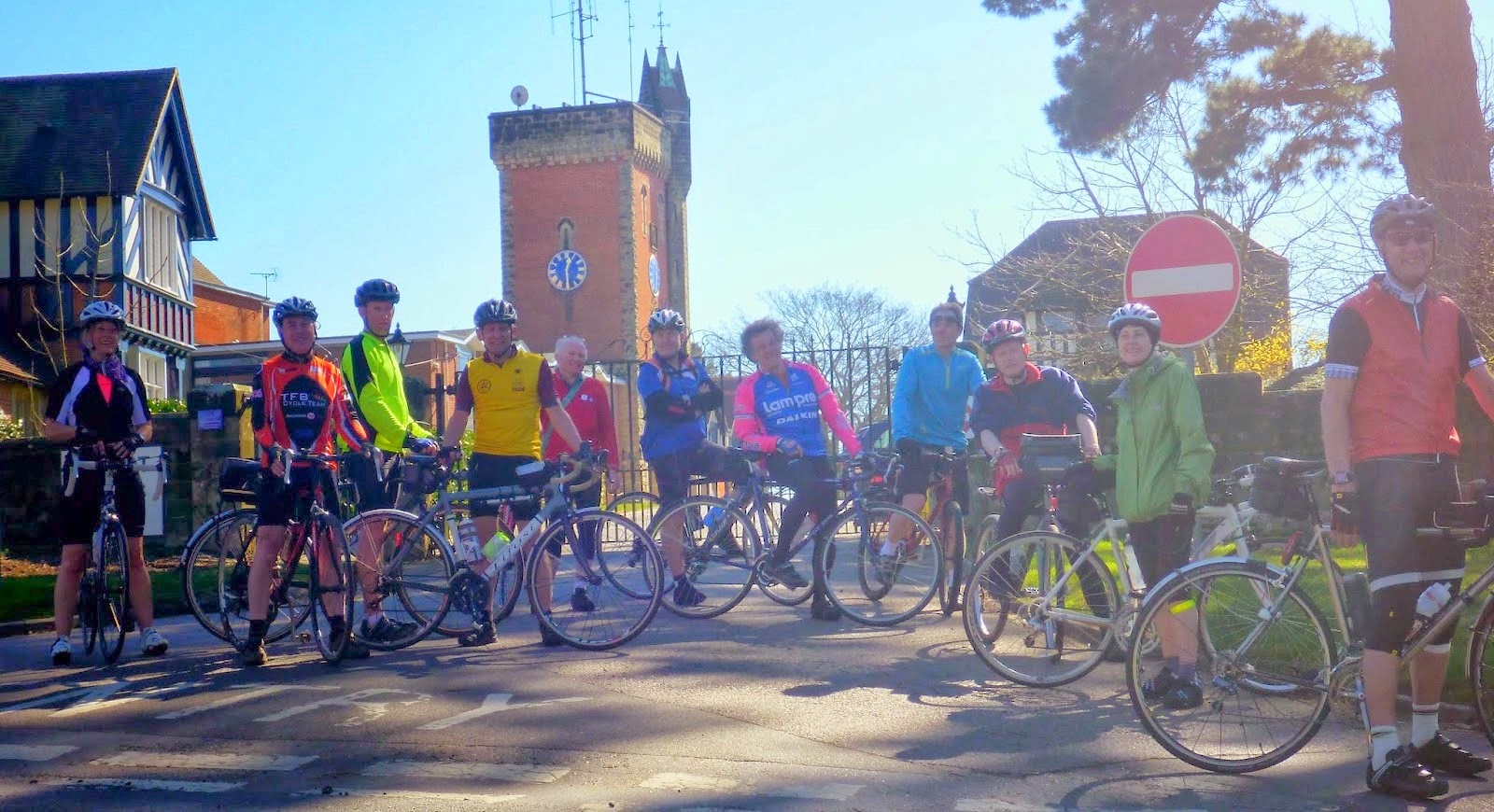 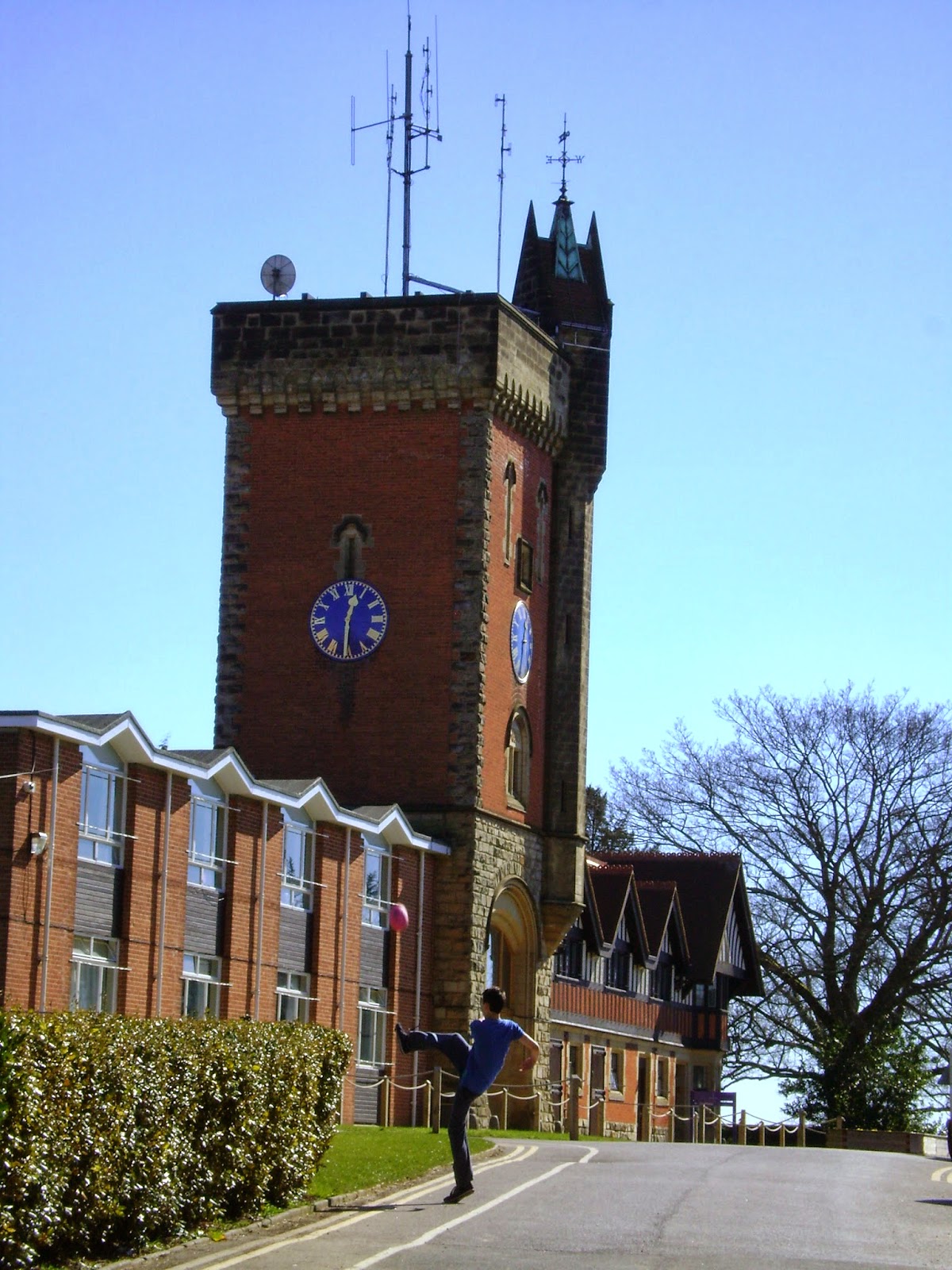 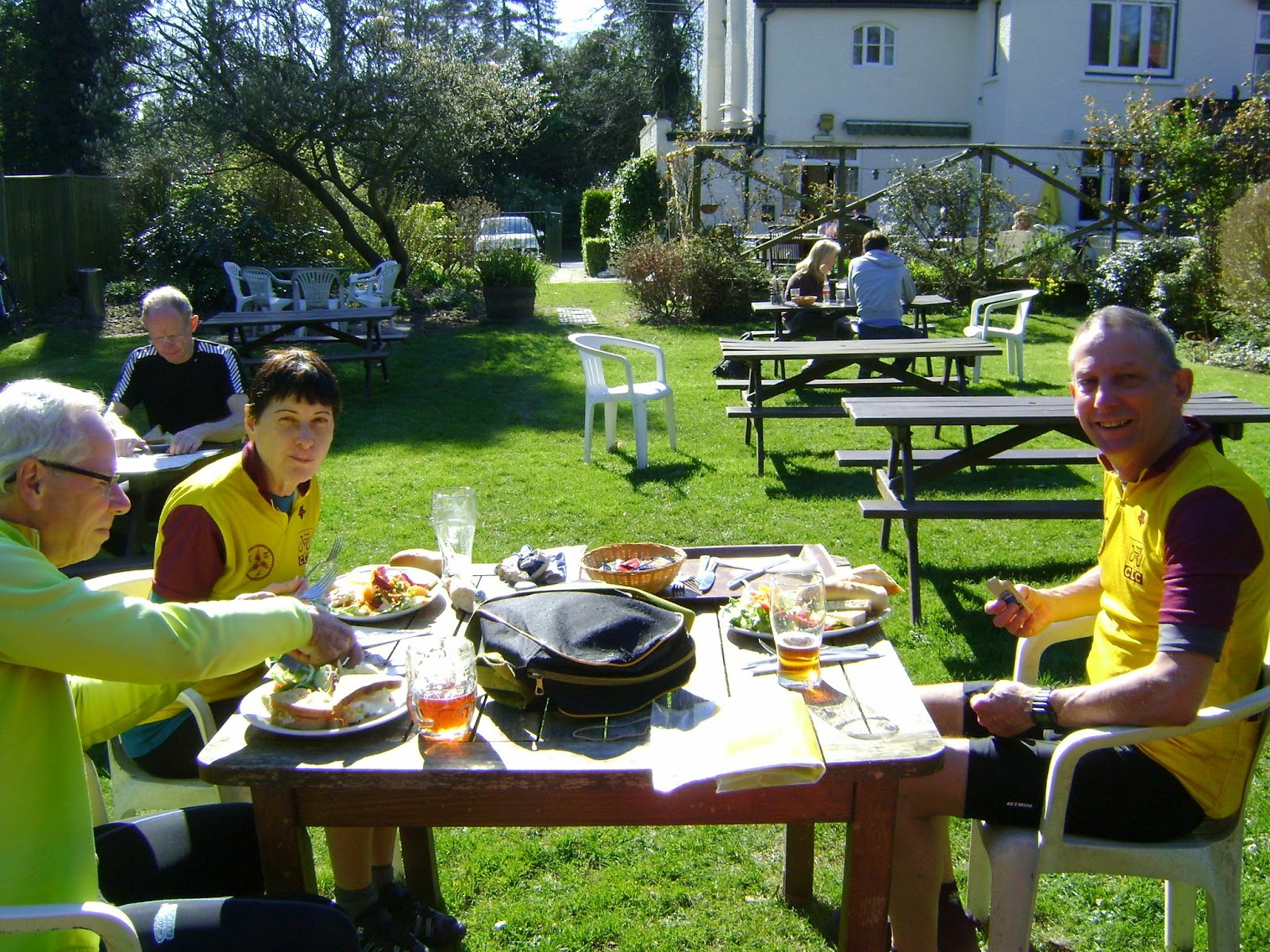 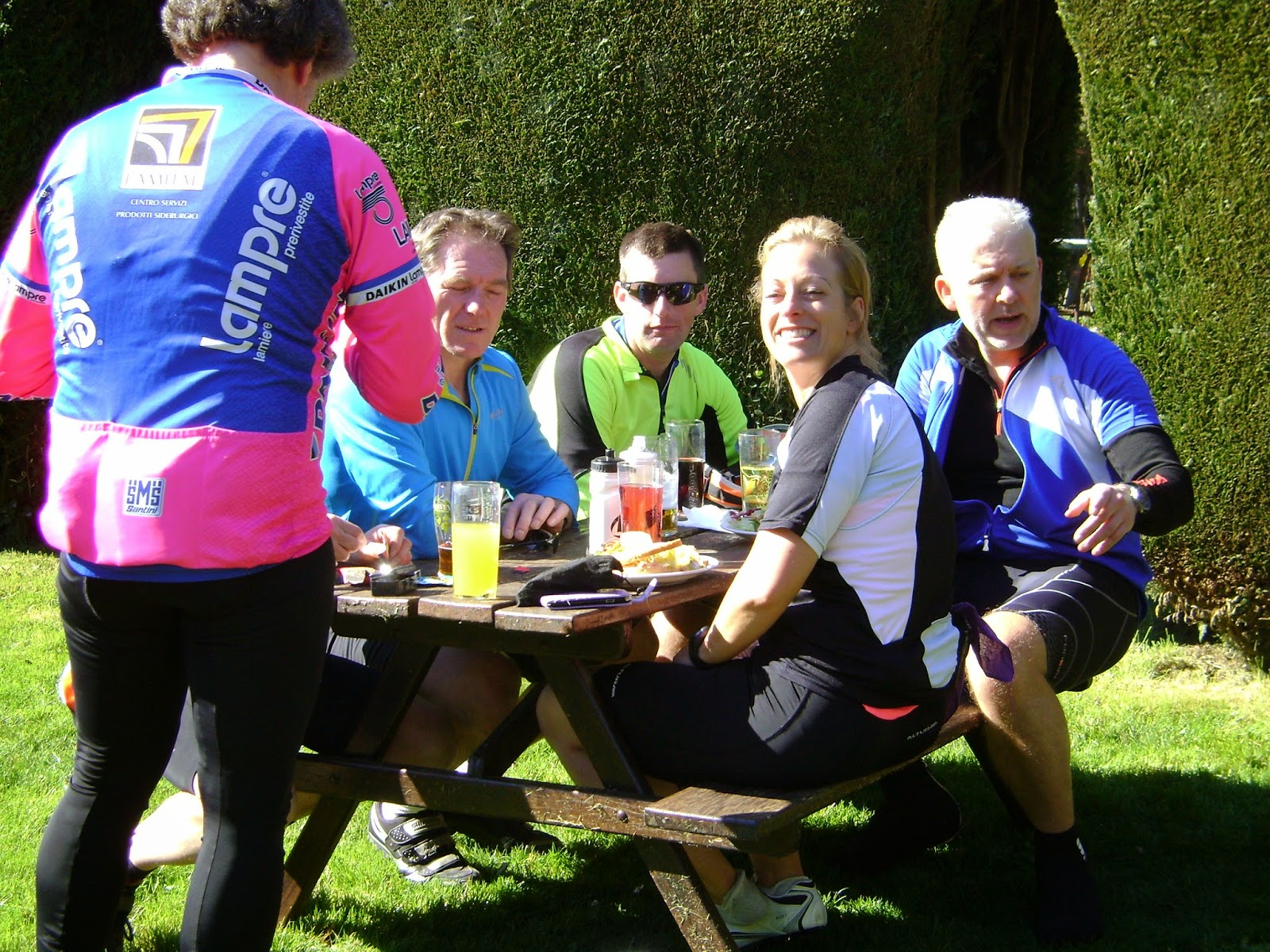 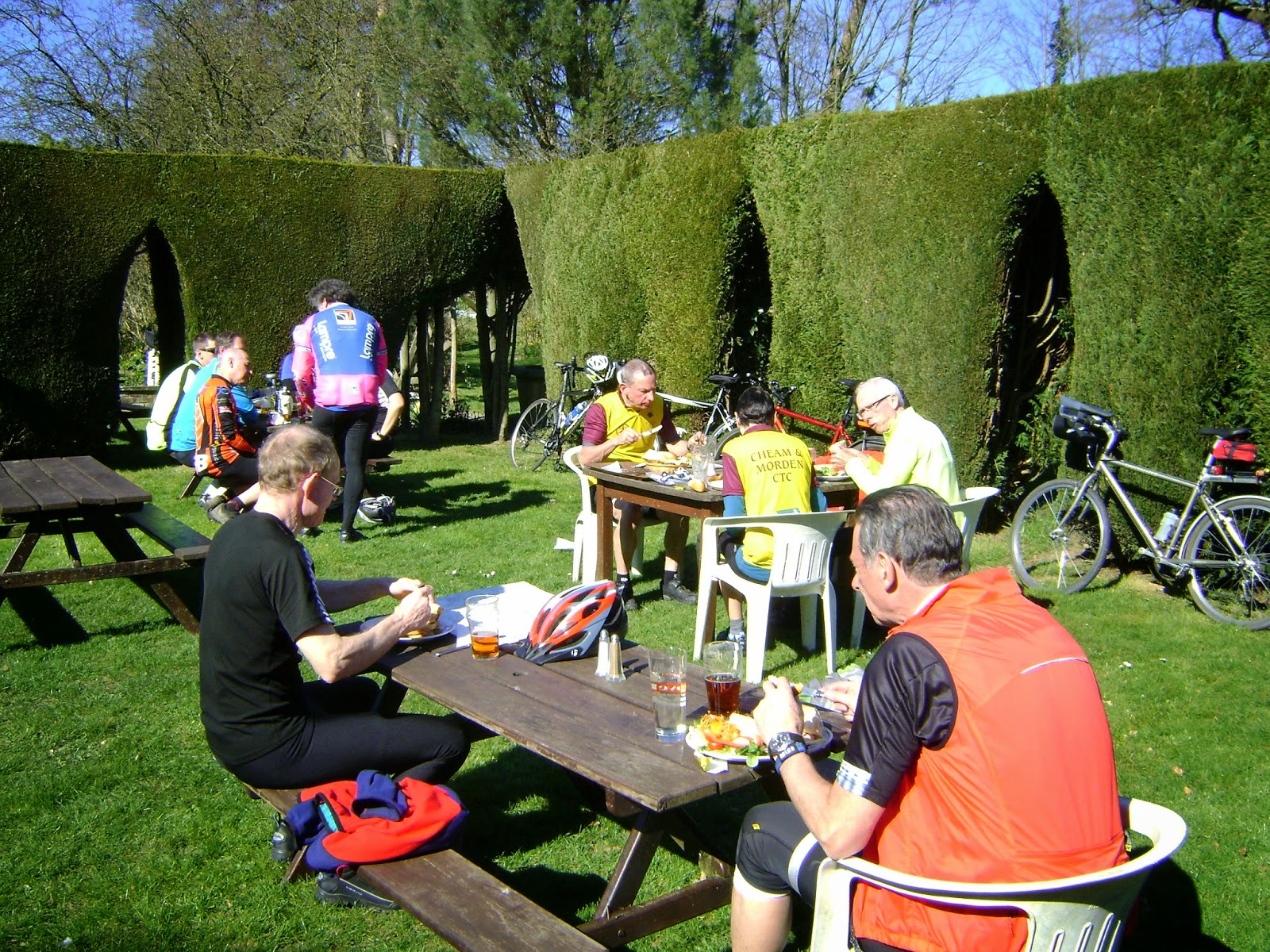 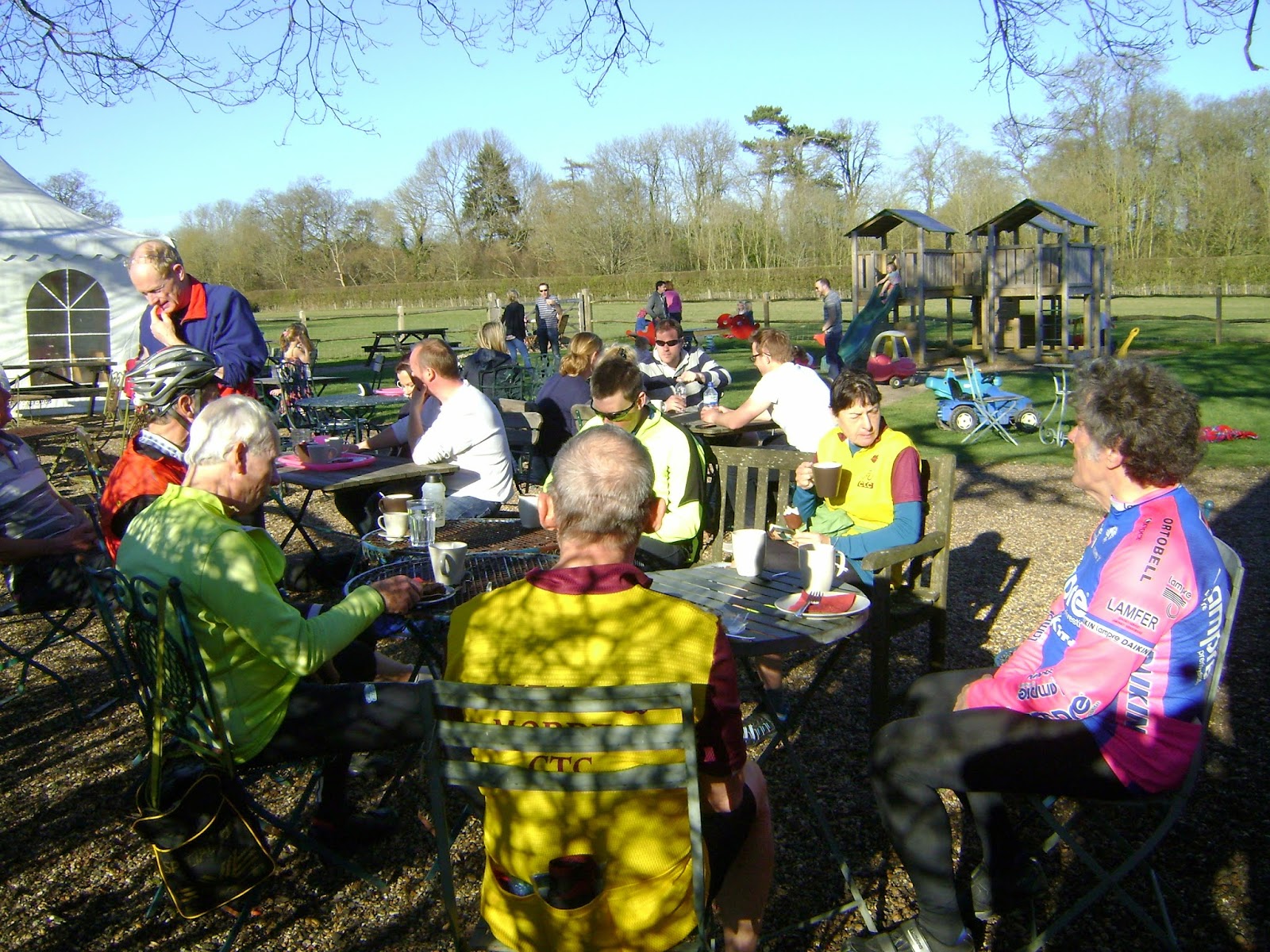 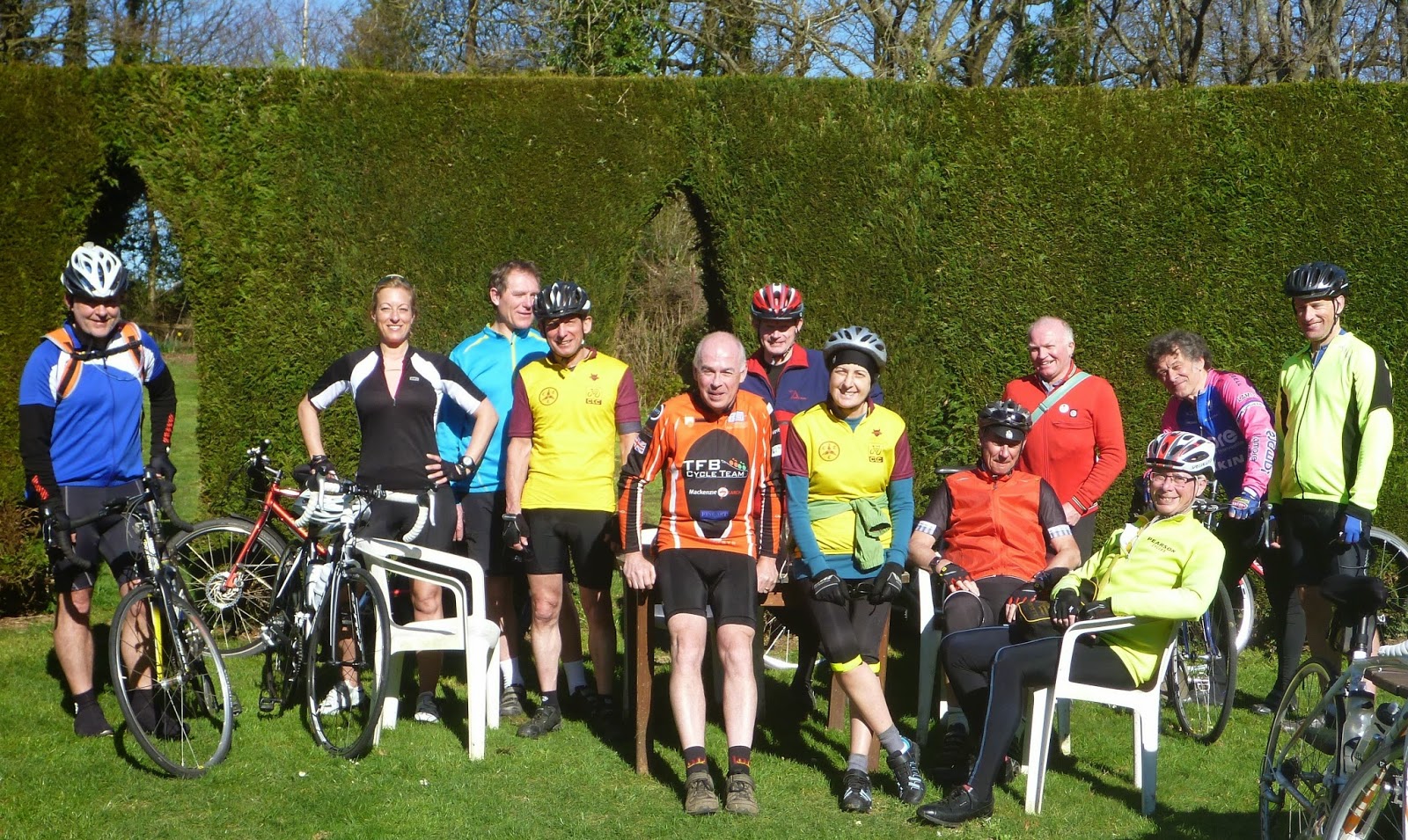 After lunch at the Jolly Tanners, Staplefield

The day started in bright but cool sunshine with a period of quiet contemplation beside the pond at Walton-on-the Hill. The gnarled old hands were joined by a young lady, Geraldine, keen to try out the C&M. After a swoop down Pebble Hill our route was benign and pretty direct, via Betchworth, Leigh and Norwood Hill to Hookwood Tesco, where others awaited our arrival. On departure, our contingent was reduced by four, including Geraldine, who had decided that a mountain bike + knobbly tyres might be rather hard work. However, one lady was replaced by another, Helen, who would ride her 'new' Scott under the guidance of TFB Simon. As we kitted up to leave, great was our shock to see Andy preparing to mount a bright red, stripped down mean machine - 650c wheels, no panniers or mudguards, and unbelievably good value bought from Decathlon. An epiphany. Can this really be Andy?


Our destination had been changed from the rather cyclist hostile Wheatsheaf at Ashfold Crossways to the cycle-friendly Jolly Tanners at Staplefield. Part of our route would mirror some of Wednesday's ride to Balcombe. We passed quickly through Horley to Copthorne and not quite so quickly up Turners Hill. At the top we paused to realign, as best we could, the rear wheel of Helen's Scott. Our advice: Get Evans to inspect and service. Then onwards, with no more hills, along the B2110, past Worth Abbey on our left. The photos were disappointing. At Brantridge Lane a long downhill took us past Wings Museum into Staplefield and the Jolly Tanners.


With good food and beer (Sussex Gold), we dined in sunshine, while Simon tinkered with the tension of Helen's pedals. As we gathered ourselves for the off, an enthusiastic lady in the garden took possession of the leader's camera and captured a full complement for posterity. Our return was halted within a few hundred yards for a bit more fettling of Helen's pedal tension, then off again via Slaugham to pass Ashfold Crossways and along Hammerpond Road and Grouse Road to Colgate and Faygate, where the TFBs branched off with Helen to head for Gatwick, while the rest continued on via Rusper to the now extended Tanhouse Farm tea shop, where cars occupied the field formerly full of gambolling lambs. We were joined by Chris D, who unfortunately had missed the warning on the blog and gone to the Wheatsheaf for lunch.

With the sun still shining, we returned together to Dorking, where we parted. Those with some way still to go may have been overtaken by dusk before reaching home. For me it was a round trip of 60 miles, on what may have been the warmest ride of the year.

Tomorrow's watering hole will be the Jolly Tanners at Staplefield, 2½ miles east of Ashfold Crossways. It would be a great shame to cycle past a lovely pub only to end up at the Wheatsheaf, which on Mothers' Day last year was far from welcoming to a small group of cyclists. Here is a link with details of the Jolly Tanners. 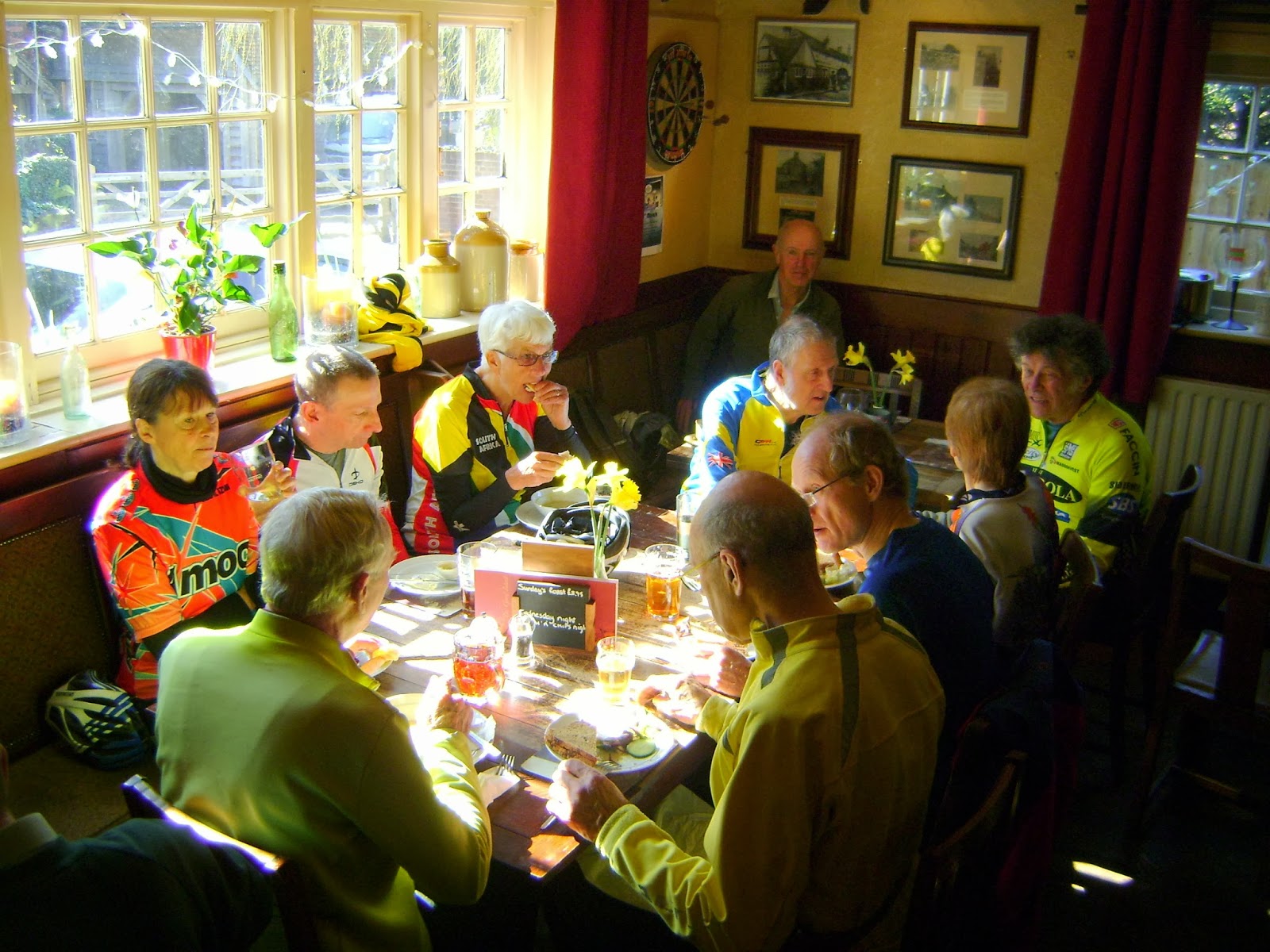 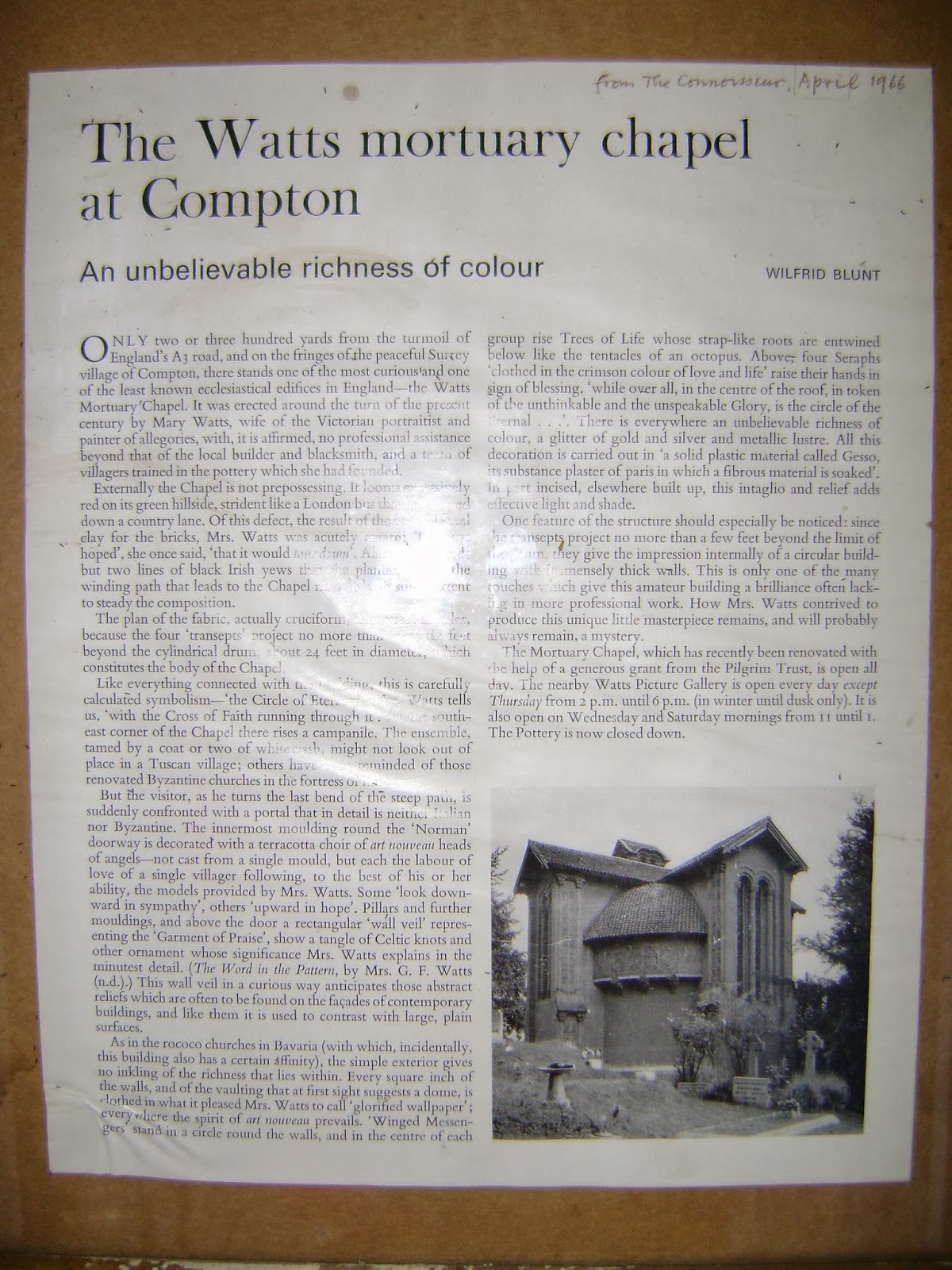 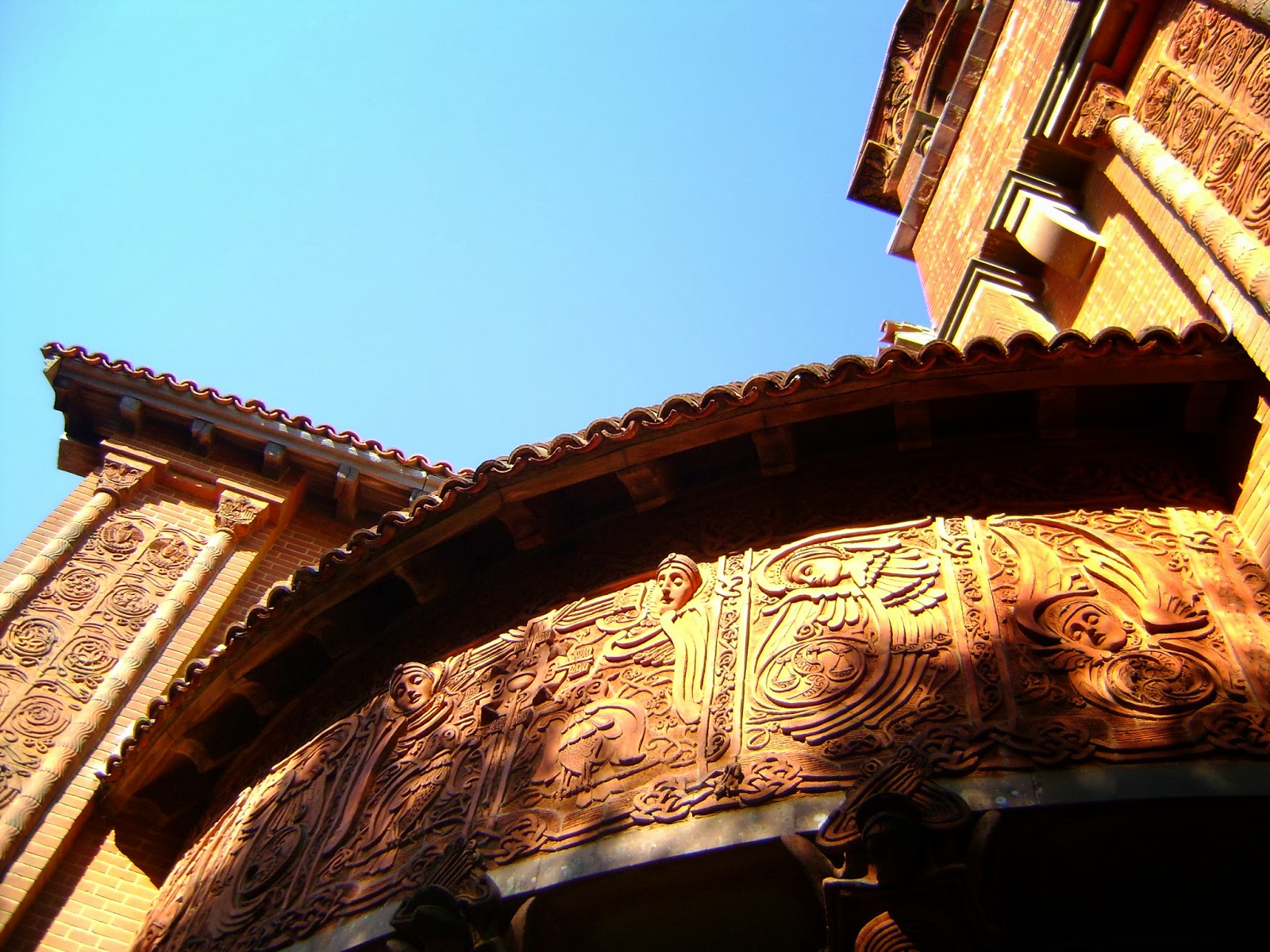 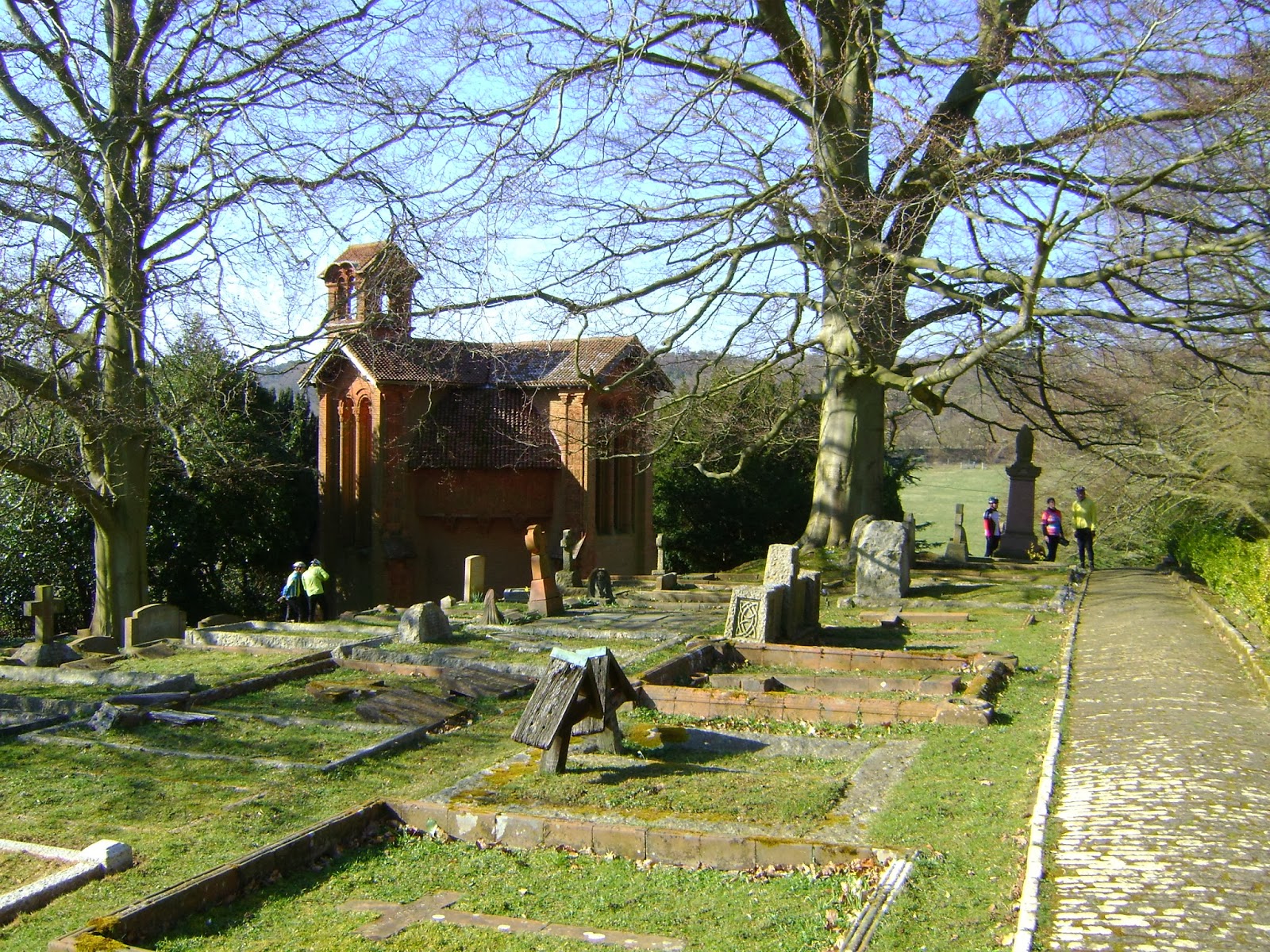 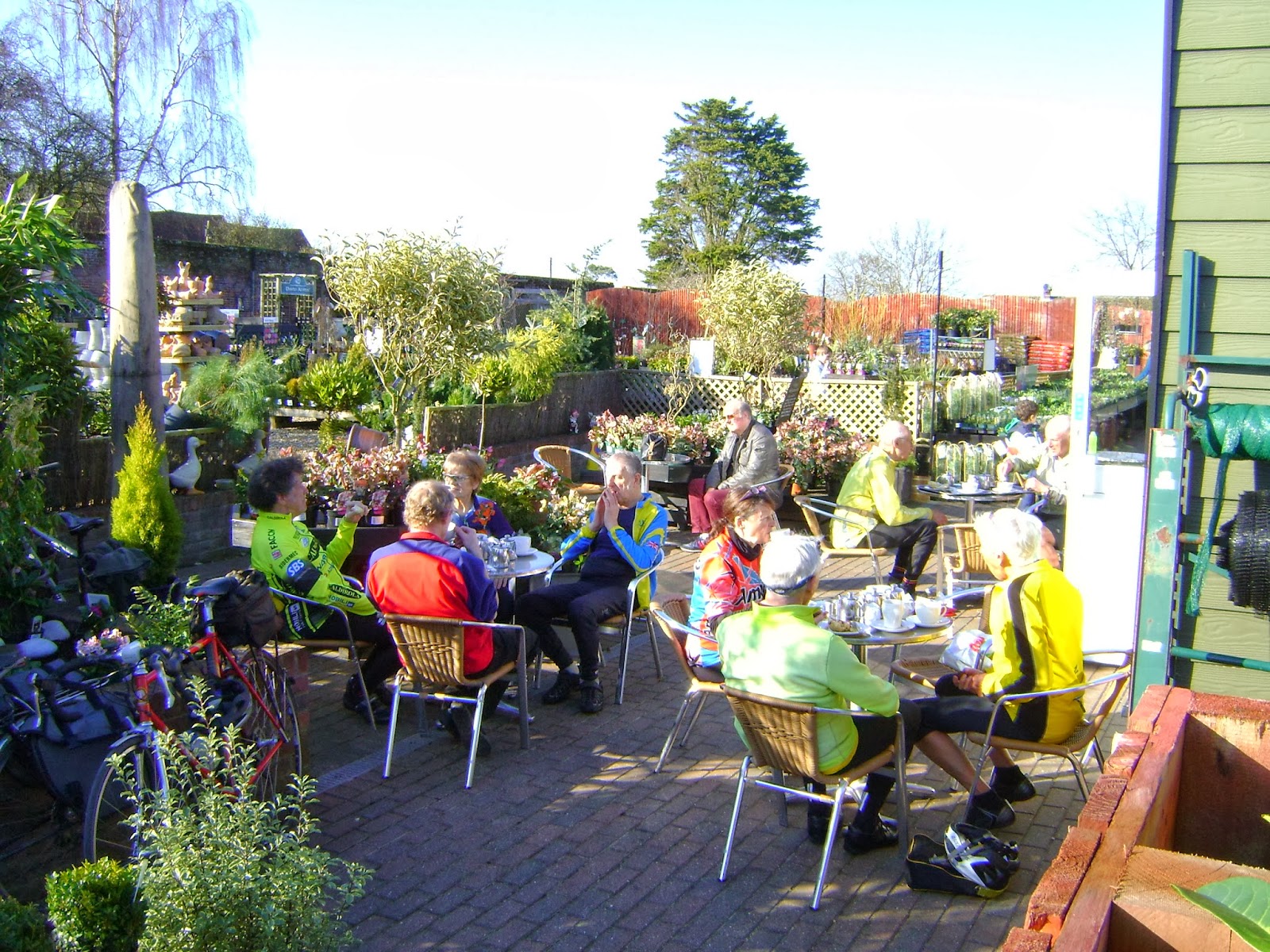 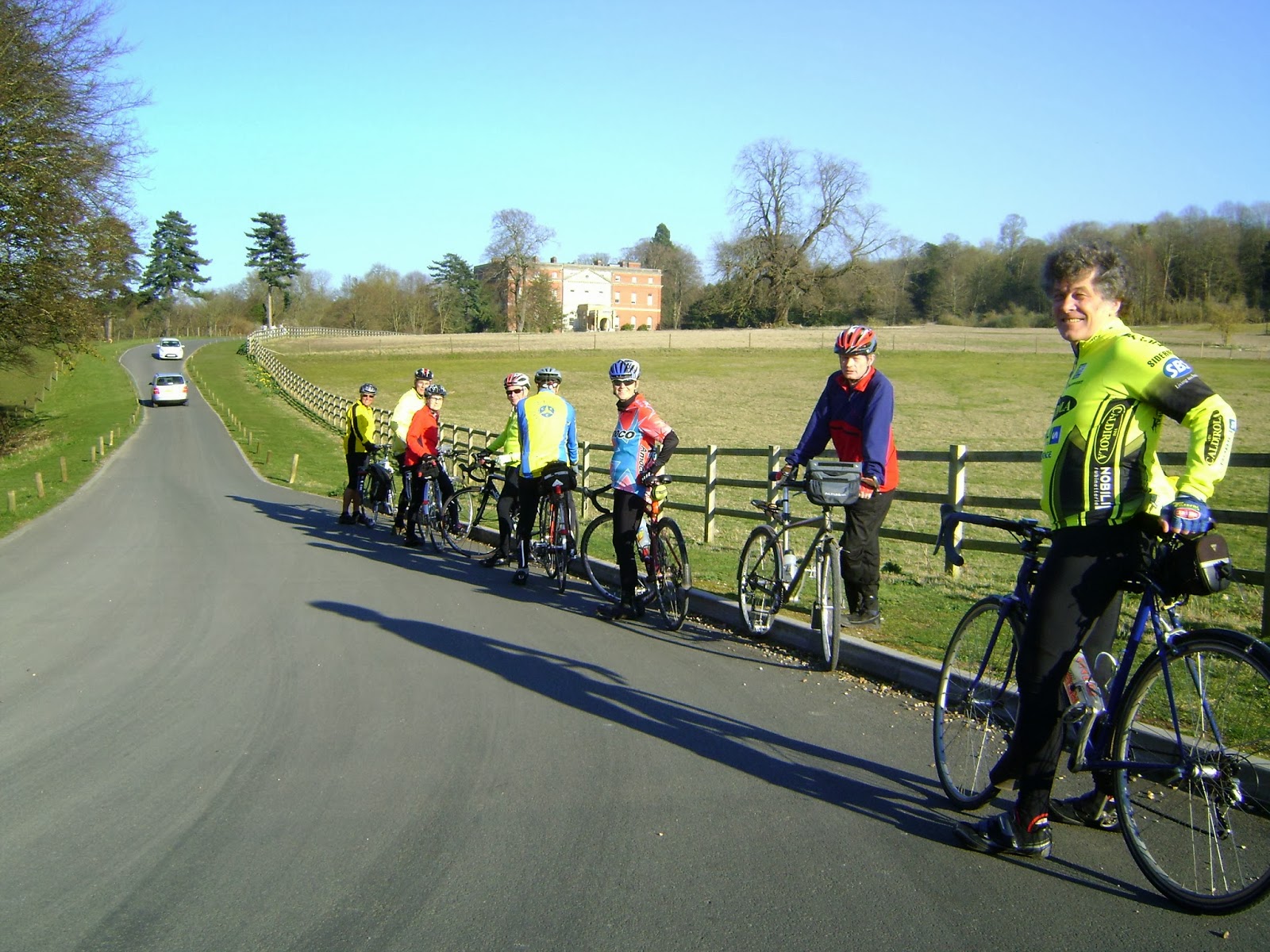 In 2013, the 20C mark was not passed until 14 April, according to weather service provider MeteoGroup.
The 20C landmark was last reached on 8 October last year.

Posted by Tartan Socks(long) at 21:14 No comments:

After Lunch at the Good Intent 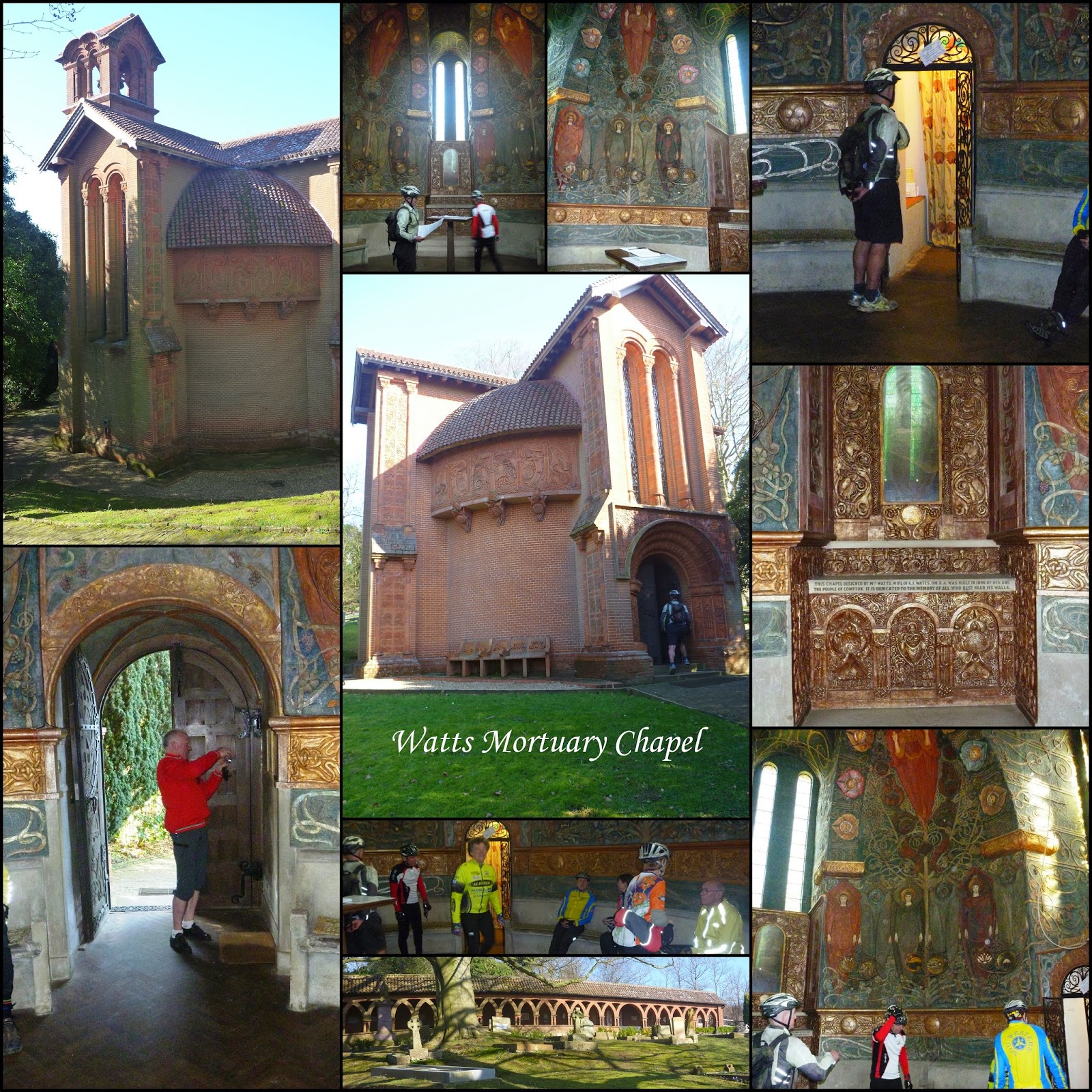 Contemplation at the Watts Cemetery Chapel

What a beautiful day, really warm with virtually no wind.

Eleven left Wetherspoons Guildford for Puttenham by climbing Sandy Lane, then dropping into Littleton and up the steep Farncombe Hill. A steady ride through Hurtmore and Shackleford and along Lombard Street brought us to Suffield Lane which climbs steadily to a top car park and gives a lovely ride to the front door of “The Good Intent”.
The food was very good and served quickly; we were on our way within the hour. Forsaking any mud, we stuck to the B3000 descending Hook Lane, Puttenham Heath to Down Lane. We had time to look at  the “very interesting” Watts Mortuary Chapel (http://en.wikipedia.org/wiki/Watts_Mortuary_Chapel) before climbing on the currently closed lane past Watts Gallery and up to the A31. Here we crossed over and went down an alleyway into Onslow Village and thus into Guildford where 10 continued to West Clandon G.C. for teas and cakes. Finally home our separate ways.


Thank you all very much for a lovely day. Irene

PS Plough Lane Cobham is now open but "fly tipped".
Posted by RaasayWarden at 06:54 No comments:

Some saucy little numbers flaunt their specifications outside Bockett's Farm

....while the C and M dine discreetly at the Bullingdon Head in Ewhurst

After leaving the '11s only' C and M-ers at Bockett's Farm eight of us headed west on the A246 to Effingham where we turned left into Beech Avenue. Knowing the surface deteriorates considerably we soon forked left into  High Barn Road then left into the wonderful recently resurfaced Hogden Lane, leading to Ranmore. At the crossroads we turned left into the now  unflooded White Down Lane, to be confronted by many competing cyclists travelling in the opposite direction, many of whom weren't prepared for the ascent of White Down. Now noticing the unfriendly but dry wind, Raikes Lane and Water Lane led to the B2126 and Holmbury St Mary, beyond which we forked right into Cotton Row, right onto the B2127 which took us to The Bull's Head at Ewhurst just in time for a 1pm lunch . This was good and served quickly and without hurrying we were on the return leg about an hour later.

Now we were heading north UP Pitch Hill, but with wind assistance we soon arrived in Shere. Turning left into Lower Street gave everyone the chance to demonstrate how to tackle a ford. There were no takers! Most of us crossed the A25 to tackle Coombe Bottom. After regrouping at the top we continued north to descend Staple Lane - no point in stopping to admire the view. A couple more decided to go straight home from there, leaving three of us to have a leisurely 3s at Squires, West Horsley.

Twenty three miles Bockett's to Squires, quite sufficient given the hills and wind. Hopefully everyone arrived home dry or nearly so, I only encountered rain south of Leatherhead.