Firstly a recap for those who missed last week's gripping episode.

Soon-to-be-ex-councillor used side roads to Sutton but then took a more characteristic LCN75 (known to the wider world as A232). After riding over its iconic Croydon flyover, we turned right at West Wickham loos whence Jackass Lane lead up to Keston Church and a gentle downhill to the recently opened High Elms Country Park cafe. The less than magnficient seven (Simon, Andrew, Ed, Graham, Keith, Mike, Roger) soon realised that they were in the wrong location! So after a lengthy breakfast we sought out the golf course where Bob and Jeff were to be found, and still time for a second breakfast. Wisely Andrew and Bob headed for home as a drizzle set in. Simon's briefing hinted at country lanes and we did pass Down House (a first for me) so Biggin Hill came as a shock. From here it's a long long and busy downhill into Westerham where the expensive Grasshopper was chosen for lunch. Eventually five became seven again (Jake and Flo after discovering another Grasshopper!) By now the drizzle was steady so abandon ship we did past Tatsfield Church to the top of Bottley Hill and down into Purley where ours ways parted.

As the flakes descended and settled I waited for the calls. When none came, I headed reluctantly for Cheam where Ed was shivering in a doorway. Two became three so with Richard we sped off through Worcester Park, Tolworth and the Dittons. Sewage led onto Hersham ghettoes and a resurfaced Walton Bridge where by chance we were caught by Andy and David W (heading in the opposite direction). By now the sleet had turned to rain and a welcome if none too warm elevenses was reached via the spiral. Positioned to avoid the leaks, we were soon joined by drowned rats Irene, Pam and Pete Mitch. Delaying until noon for glimmers of light, we crossed the ford down to the Chertsey road and after St Anne's Hill and Lyne climbed to the treacle mines on Staple Hill. Just on one o'clock "Soups all round" was our order in the friendly Four Horseshoes, Burrowhill. The short hop to Ottershaw Tesco was accomplished in bright sunshine and less than 30 minutes. After more relaxing (and shopping for the ladies), I reached home in the light - 45 miles door to door.

PS Pics from PJ.
Posted by Anonymous at 15:21 No comments:

Read All About It!

As most will know, our esteemed Editor-in-Chief of the Sou’Wester, Mike Morley, is suffering an anguished convalescence on the sands of Bondi Beach. As his shaking finger seems to have pointed in my direction (he’s getting his own back!), and as the deadline for news, reports, scandal, tit-tat etc for the Jan/Feb ‘09 edition of the Sou’Wester is 26 November (next Wednesday!), I am writing to ask if you could let me have copies of items already submitted, pending or white-hot off the paper, so that I can present them to our publisher Colin Quemby for setting and printing.

Now is your chance to get into print, so sharpen that pencil and let us know what you have always wanted to say. How about a Letter to the Editor from Disgusted Tunbridge Wells? You’ll never have a better chance than this! Don’t waste any time thinking about it – do it know!

Whatever you have got to say, let me have it now! My contact details are in the last Sou’Wester. The lines are now open!

Jeff
(Ever so temporary sub-editor)
Posted by Jeff at 23:32 No comments: 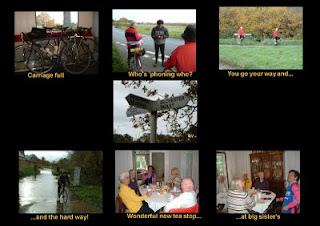 At Surbiton Station Jeff stood out amongst a throng of passengers. Then Andy appeared but not in time to purchase our tickets as all the booking windows closed without notice at 0925! After the mad dash for the DIY machines, it was no surprise when the platform announcer told us the train had been delayed. At Woking Irene and Pam joined and so five detrained at Hook for our Tour Of North Hampshire. The motorway road was closed to all but ourselves and an errant LOL (little old lady) motorist. Soon we were heading through Greywell where the Basingstoke Canal ends. After five miles Conkers GC saw us joining Bob and Pete as the only occupants of its cafe.

It was not a great day for navigators. Andy led us past Basing House to join NCN23 in Basingstoke; a curious route but only when we headed south back into Old Basing were my shouts heeded and we reversed. At a fork beyond Bramley NCN23 went left and we went right to a photo shoot at the ford beside Clapper's Farm (651616). By now the skies were darkening and cloaks were donned as we encircled Calleva's walls. Pete soon peeled off for Mortimer West End but everyone else was up for The Big Sister and Molly. In driving rain we swept west into Tadley where a call beside the Treacle Mine forewarned of our coming. To broaden Jeff's experience, we took in AWE to arrive around 1330hours. After a hurried lunch of soup and rolls we were off past Baughurst church and first left down a delightful lane which ended back in Tadley! - an embarassing detour of 3+ miles. Next we took the second left (200 yards beyond the first) to Charter Alley. After a brief but busy A430 sprint, we entered Elm Park GC Pamber End for a prearranged meeting with Bob, though no time for tea. At Bramley End I punctured waving on the rest. After a quickish change and a long chase along NCN23 and through Newnham, I caught them (on Hook platform). Around 37.5 miles including those detours.
Posted by Anonymous at 19:46 No comments: 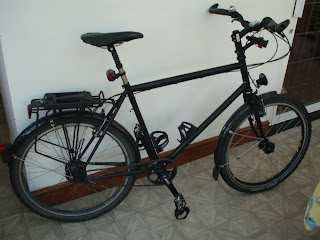 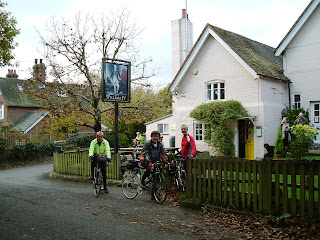 There were Seven Magnificent Cycling Samurai who set off from North Cheam on an unexpectedly fine November Sunday morning. They were by name: Andrew, Ed, Ian, Jeff, Keith, Mike and Richard. The strategy was to launch an assault upon the 11 o’clock objective of W. Horsley from the hills to the South, rather than the plains to the North, as had been done the previous week.

The Seven soon were Six at the top of Epsom Downs, as Richard decided to break off to follow his own line of attack. The off-road lure of Stane Street was resisted as the party found ample cover among the wooded hills and dales of the Surrey Downs, the leaves displaying a glorious range of colour. I cannot give further detail of the route they took. Suffice to say that an exhilarated, if not exhausted cohort reached its first objective, disguised as a garden centre, to find it already in the possession of a larger group of friendly forces.

Refreshed the party split, some heading home, some onward to adventures new. Shere Road was overcome, followed by a cautious descent to Shere and Little London, where lunch was taken at the hostelry of William IV. Here some were scurrilously left to break their bread in a nearby pasture, before being allowed to enter to warm themselves and sup a jar of ale. The broth and beer were good. 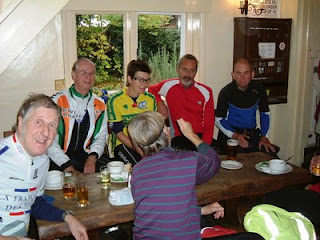 The party regrouped to venture further, though two ladies took early leave to return to their distant Thames-side barracks. So on via Hook Lane, Jesses Lane and Pond Lane to the Peaslake hollow. Then a long haul up Radnor Road through Hurt Wood to the summit, where breath was taken and the view admired. However, disaster was soon to strike. A treacherous trench of hardened silt across a bend in the lane caused the hapless leader to stop to warn of danger – then they were gone! The leaderless group, intoxicated by the tempting downhill, released their brakes and disappeared down Holmbury Rd, leaving the twitching lizard’s tail behind on Three Mile Rd. Would the tailless lizard climb back to rejoin its severed tail? You know the answer! Would it be inclined to climb up Miles’s Hill to reunite at Pasture Wood? Wireless telephony said ‘no’.

The tail of Andy, Jeff and Terry therefore pressed on to Denbies, where a valiant Jake appeared bringing news that the breakaway had discovered more than ample solace at the altar of Capel Church – the tea-stop of the Gods.

Some other will no doubt relate the tale of what befell the rest.

As for the three remaining Samurai, soon they vanished into the thickening dusk.
Posted by Jeff at 18:07 1 comment: