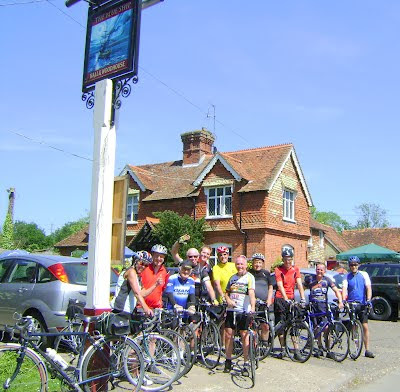 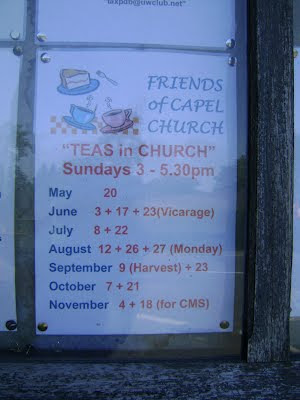 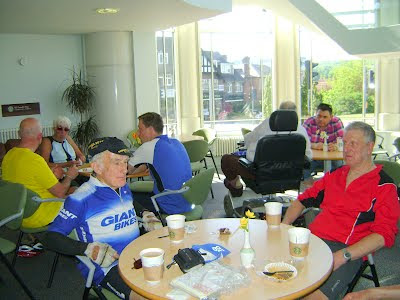 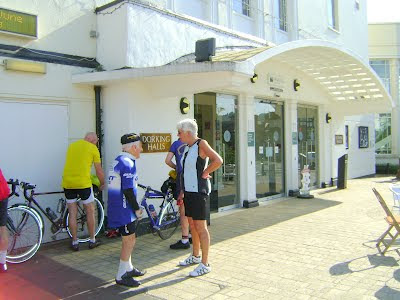 I counted 17 at 11's (Vineries) including new face Jenny from Putney,formally a Oxford CTC member.
Ed led 13 to lunch over the North Downs,down Coombe Bottom,through Shere & Peaslake to Ewhurst.
A short drink then Ellens Green,Rudgwick to The Blue Ship at The Haven.
Not too busy,pint of orange squash......£1.30.
After photo calls it was time to leave...............but I managed to get the dates wrong at Capel so confident North Holmwood would be open,we rode on.
Awwww gawd......wrong again.......they don't start until 10th June (postponed until 17th June).
So Dorking Halls it was for some.......Denbies for others.
A very warm day with virtually cloudless skies.
49 miles (from Ewell).
Posted by Tartan Socks(long) at 12:51 1 comment: 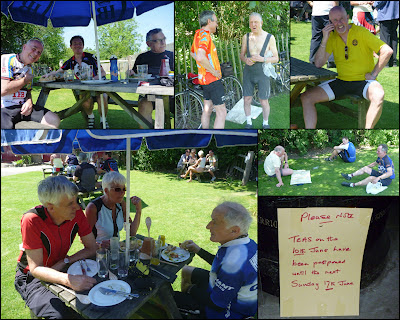 Lunch at the Blue Ship
Tea? To err is human; to forgive divine


Weather was hot with five riders at the North Cheam start. Andy gives me the easy rides but with the temperature reading 32 degrees I began to wonder. I took a back street route to meet up with another twelve at the Vineries. Then off we set uphill and downhill to Coombe Bottom, Shere, Ewhurst, Ellens Green, Rudgwick and the Haven.
After a quiet lunch we retraced our way via Bucks Green, Cox Green and Okewood to Capel Church, which was closed. Next venue  North Holmwood Church which was closed. Tea for some was at Dorking Halls and at Denbies for others.
Being hot the group was sedate with the odd burst from Pam downhill. I had to make a stop at Leatherhead Wetherspoons before returning home. Distance for me was 65 miles; for Pam, Vic, Richard, Tony, John and Paul it may have been 80 miles or more. Thanks for coming out. 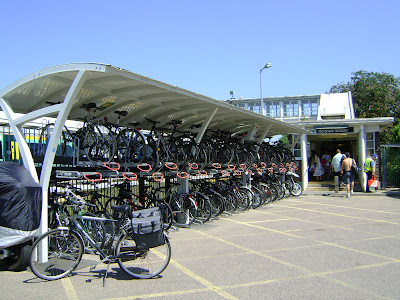 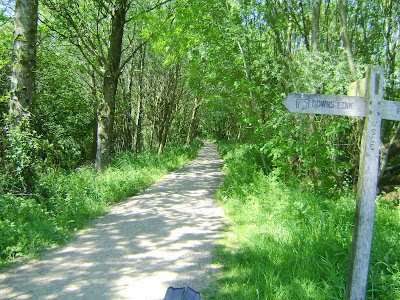 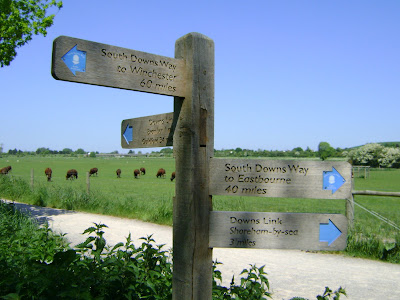 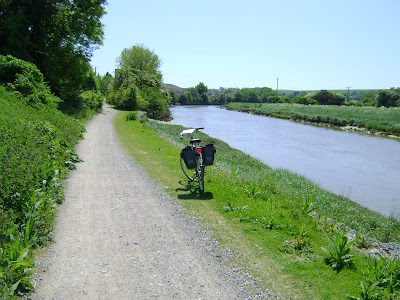 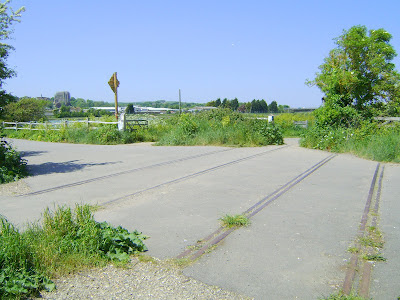 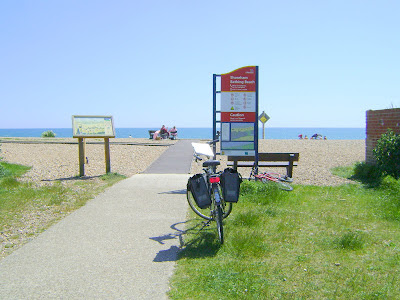 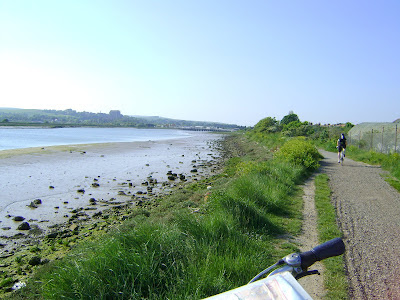 Looking North with Lancing College on the horizon.
I plan to use this as part of a forthcoming ride to Shoreham on Sea.
The last train to use this route was the 21.28 Brighton to Horsham (via Shoreham) on Sunday 6th March 1966.
Read more here
:
http://en.wikipedia.org/wiki/Steyning_Line
Posted by Tartan Socks(long) at 22:22 No comments:

Some may already know that on Tuesday 29th May,LOCOG release tickets for Boxhill spectator viewing.

Here is a map of the arrangements for the area.

Also for those planning to cycle/walk to Boxhill.


Alternatively,you may want to see the race from Denbies where a bike fest is taking place. 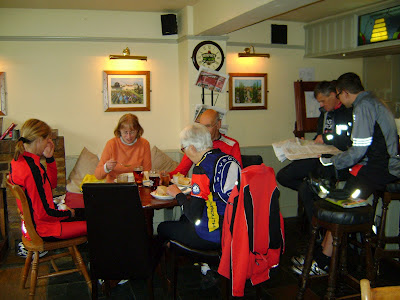 Dave led 10 riders from Windsor Farm Shop via Eton and the towpath to Dorney.
West to Bray to arrive (less Alan) at White Waltham (12.15).
Bob joined us after suffering a puncture in Windsor................but it was 1.30 and no time to waste so we hit the road.
Maidens Green,Winkfield,Cheapside & Virginia Water to tea at Lyne.

A rather cool cloudy day,courtesy of a fresh northerly wind.

All London bound passengers may have to travel via Dorking to return home.

There will be NO bikes carried other than folders on both days.

Posted by Tartan Socks(long) at 08:28 No comments:

Barry Togood informs that Keith has broken his arm see KPRC blog for more details.
Posted by mike morley at 22:29 No comments: 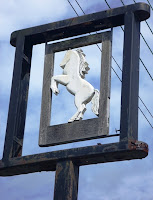 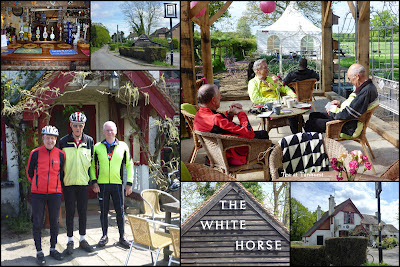 On Sunday morning freak weather revealed a bright yellow orb in a blue sky. This frightened the natives who were reluctant to venture out. However, Ed was relaxing by the pond at Walton on the Hill and watching the wildfowl mating, or trying to. Three riders (Dave, Ed and Matt) made it undaunted to the pond, before heading downhill towards the temple of the sun god Tesco at Hookwood. On the way we lost one and found one. When Terry arrived we were just four in number for elevenses. On the way out we lost Matt, who succumbed to temptation and went back in to examine the vfm of Tesco cycle helmets. Thus it was four musketeers who shot off south heading via Charlwood, Ifield, Colgate, Pen Ponds and Lower Beeding to our lunch time target of the White Horse in Maplehurst.

On an earlier visit I had been the solitary customer, but this time the bar was fairly busy, with East Surrey and Croydon CTC having settled in before us. After a sandwich and a locally brewed cider for Terry, we resumed our circuit, still in fitful sunshine, via Copsale and Horsham to an unplanned tea-stop at Tanhurst Farm. Here we were joined by our Chairman Colin, surprised to see us as we were programmed to be at Brockham. After a leisurely tea, we struck a leisurely cadence to find our way to the gas works at Pixham and the parting of our ways, with 60 miles untouched by a single raindrop. 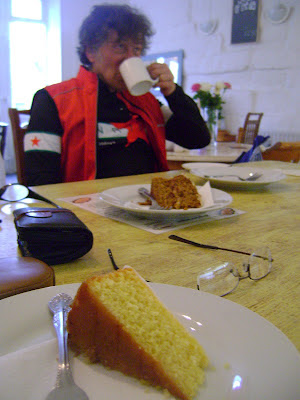 Yep.........we're into May and the birds are singing,there's rapeseed in the fields,bluebells in the woods & the days are getting longer,but.......sadly today feels more like February.
Daniel & Steff joined me from a new start venue at Banstead M & S which was open at 9am.
If it wasn't raining............. it was due to anytime soon but not enough to cape up.............for now at least.
We left Godstone in light drizzle by now our numbers had risen to 5 (Jeff & Graham).
Steff peeled off approaching Lingfield,we continued to arrive at Cowden but were soon to continue to Edenbridge on account of a "shooting party" taking over The Fountain..........damn!
It was roasts all round bar a certain individual.
The highlight of the day was finding a new tea stop in Godstone where a steaming cup of hot tea is just 90p.So welcome on this the most miserable of days.
Posted by Tartan Socks(long) at 19:19 No comments: 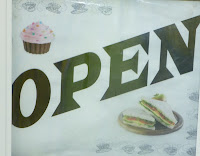 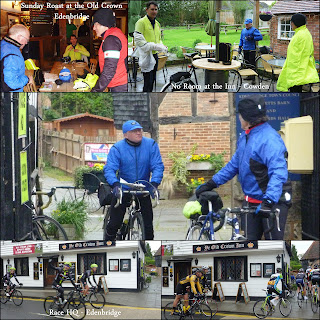 Pub hopping for lunch
The saloon at the Fountain Cowden was full of gun-slingers.
We took the hint and looked elsewhere 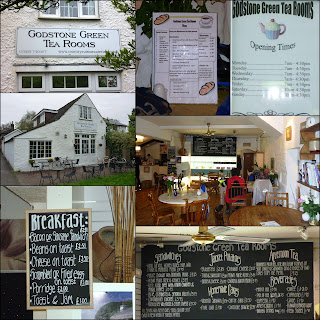 Godstone Green Tea Rooms
Definitely one to add to the CTC Handbook - Oh, Sorry!
Forgot we don't have one any longer. Well, it's now on OUR database!