To avoid any potential overlap with Tony's ride next Sunday, and in view of the somewhat uncertain weather forecast for the Easter weekend (!), I am completely changing the direction of this Sunday's ride completely and, after elevenses at Polesden Lacey we will be heading, provisionally, for the Saddlers Arms at Send.   Any off-tarmac highly unlikely!

Do not be too disappointed, the Wasps Green ride will be resurrected later in the programme!

Ten rode away from Stoke d'Abernon - destination Guildford. Thanks to dry conditions we were able to use the tracks to Downside then continued westish to Ripley passing the 'exclusive apartments' in what was The Hautboy at Ockham. Lady Harberton must be laughing. A quiet stretch to Send ended by joining the Send Road but we soon left that to head for Jacobs Well. Shortly after the railway bridge in Saltbox Road we turned onto the bridleway which led to Stoughton. A short diversion was made to briefly view the CTC/Cycling UK office (see Tony's photo) before proceding to the almost empty Rowbarge. Hope that isn't a bad sign, but it was busier durintg the week Traditional Sunday roasts aren't served here but normal pub grub is, and very nice it was too.

My original plan had been to use the towpath after lunch but when doing my recce I found trees were being pollarded and other 'works' taking place which made the towpath unrideable. Perhaps we can use that route in the summer  Fortunately there is a cycle path from The Rowbarge over the A3 and alongside the A25 to the junction with London Road. A short stretch of busy road then we turned into Waylea Avenue and via various residential roads in Burpham we soon arrived at the start of the cycle track alongside the A3, from where it was a short distance to Pinnocks at Ripley.

A pleasant rainless, sunless, hillless ride, thanks all for company and backmarkers (assorted). 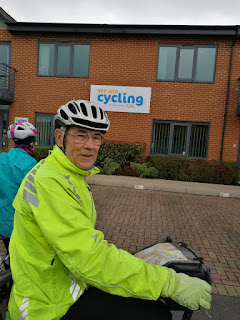 Terry took us on a detour to view this CTC HQ. Pretty unspectacular.
Posted by Tony at 19:39 No comments:

....to change your clocks on Saturday March 24th or you might miss the 1100 depart from Stoke d'Abernon or lunch at The Rowbarge, Guildford.

I don’t know if anyone else is keeping tags on this saga which started way back in 2013
http://www.elmbridgecycle.org/node/195

After digging further I turned up this (on the Woking Cycle Users Group website).

Regarding Muddy Lane, we have received confirmation that the public inquiry regarding Surrey County Council requesting a map modification order to change Muddy Lane to a bridleway will be held on 22 May 2018 at the Council Chamber, Woking Borough Council, Civic Offices, Gloucester Square, Woking, Surrey, GU21 6YL starting at 10 a.m.

If we wish to be called as witnesses, we'll need to contact the Surrey County Council Countryside Access Officers.

I made the survey ride on Wednesday - 55+ miles door to door. Plenty of utilities spending the last of their budgets in Kingston, Capel, Beare Green and Leatherhead. Quite a bit of run-off where one doesn't need it and offroad wasn't a good idea - worse than previous Wednesday.  I twice came to a complete standstill (on New Road and in Horton Park).

I didn't make a booking as Sunday's forecast is dire (overnight snow, chill factor of -7). If you're out and about, I doubt I'll be joining you but if there's an improvement I'll tried to reach the Vineries.
Posted by RaasayWarden at 16:29 No comments:


I arrived at 11's just behind Graham and Alan. No Dave, he had said prior that he had other commitments (MD).

In dribs and drabs the throng swelled to a good number but not all were going to continue on the ride. Graham, Ed, Lillian, Pam, Vic Tony to lunch. David Vine,Terry, Bob, Richard, Don, Maureen, Bill to 11's

I had planned a nice 27 miles route to lunch with only on real hill, Callow Hill, somewhere at this point Richard took his leave, and the nice decent of Crimp Hill, then on through Windsor to Fifield and up through Braywick park. As we got into Maidenhead, around 22 miles, there was a group decision to change the lunch venue to the Bear pub. 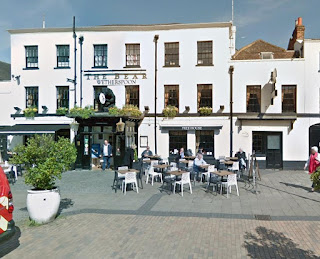 As usual with Wetherspoons the service and food were quick and good. Setting off and onto a short stretch of the Jubilee river and into a headwind across Dorney common. On reaching Datchet Ed and Lillian decided to take the train from here.

We carried on heading towards Horton, Pam and I opted for 3's at Liquid Leisure but Graham and Vic headed off home. On leaving 3's Pam turned for Wraysbury and I continued East. At Cranford the rain started so a brief stop to don water proofs, it turned out to be a light shower and I got home virtually dry. Nice ride without full winter kit. We had occasional sunshine, a pleasant day on the bike.

This coming Sunday,  the 11th, is Mothers day and pubs are packed. So I have changed the lunch venue to Flowerland GC Bourne End. 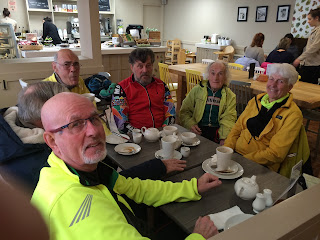 A bright and, thankfully, snow-free morning saw Bill S, Tony Hopkins, Graham, Pam, Vic, Terry and me meet at the Bourne Valley Garden Centre for elevenses.  It was excellent to see Vic restored to cycling so quickly after his recent cataract op, and in fine fettle!   All but Bill and Terry continued to lunch.  I had changed the lunch venue to Staines Wetherspoons as the forecast threatened afternoon rain, so we took a shortish and not especially inspiring route, although there were a few short, sharp climbs designed to reactivate corpuscles torpid after the recent cold snap!  It began to rain just as we reached our lunch stop where Ed joined us having ridden direct.  The rain didn't amount to much in the end but it stayed overcast and threatening, so we lingered over lunch.  When we did finally get going some headed direct to Upper Halliford for tea, while Vic and I peeled off at Laleham to follow the river homewards.  Thanks to all for your company.

Unfortunately, Sunday looks like being damp for at least part of the day, although it is difficult to tell which part(s) because the forecast keeps changing!  In view of this, and to give us an easier transition back into cycling following the end of the Second Ice Age(!), I will be changing the lunch stop, probably to Staines Wetherspoons.   Elevenses will still be at the Bourne Valley Garden Centre.   Fear not, the ride to the Tilly Shilling will be resurrected in due course!